Having failed to suffer a single defeat in his opening 23 games as a professional, it is no surprise that Ireland lock James Ryan possesses a winning mentality.

Following 15 straight victories in the blue of Leinster and eight in the green of Ireland, Ryan finally found himself on the wrong side of a result in the first Test of the 2018 summer tour to Australia.

There have been ups and downs at provincial and international level since then, but the towering second row’s record against Scotland, who Ireland face in Edinburgh this Sunday, currently stands at five wins and no losses.

You have to go back to February 2017 for the last time Scotland got the better of Ireland, at which point Ryan was yet to make a senior appearance for either province or country.

Recent history in this fixture suggests Ireland will enter Sunday afternoon’s contest as favourites, but Ryan is quick to downplay the significance of this.

When Ireland and Scotland last clashed at BT Murrayfield a little over two years ago, a crowd of 67,500 were in attendance. 51,000 supporters descended upon the reserve fixture in 2020, but due to the current Covid-19 restrictions, this weekend’s match will take place behind closed doors.

While conceding this changes the dynamic of the game to a certain degree, Ryan still believes playing on home soil will potentially be of benefit to the Scots.

It’s not the same going to Murrayfield with 60,000 or whatever it is. I still think it’s different than playing them at home in the Aviva, even with no fans.

“I think it just adds an extra few percent to what already is a big challenge. We’re looking forward to that. You’ve got to go on the road in this Championship and win big games. That’s what we’re looking to do this week.”

Injuries and suspension had kept them apart for the opening two rounds of this year’s Six Nations (and the final three rounds of the 2020 tournament), but Ryan was thrilled to rekindle his partnership with the Craigavon man in the Italian capital.

“I’ve a great relationship with him. I think I get along with Hendy as good as anyone in here. We’re good mates first and foremost, but I really enjoy playing with him.

“When he’s at his best, he’s such a destructive force and you love playing with somebody like that alongside you in the second row. It’s a privilege really to play with him when I get the chance.” 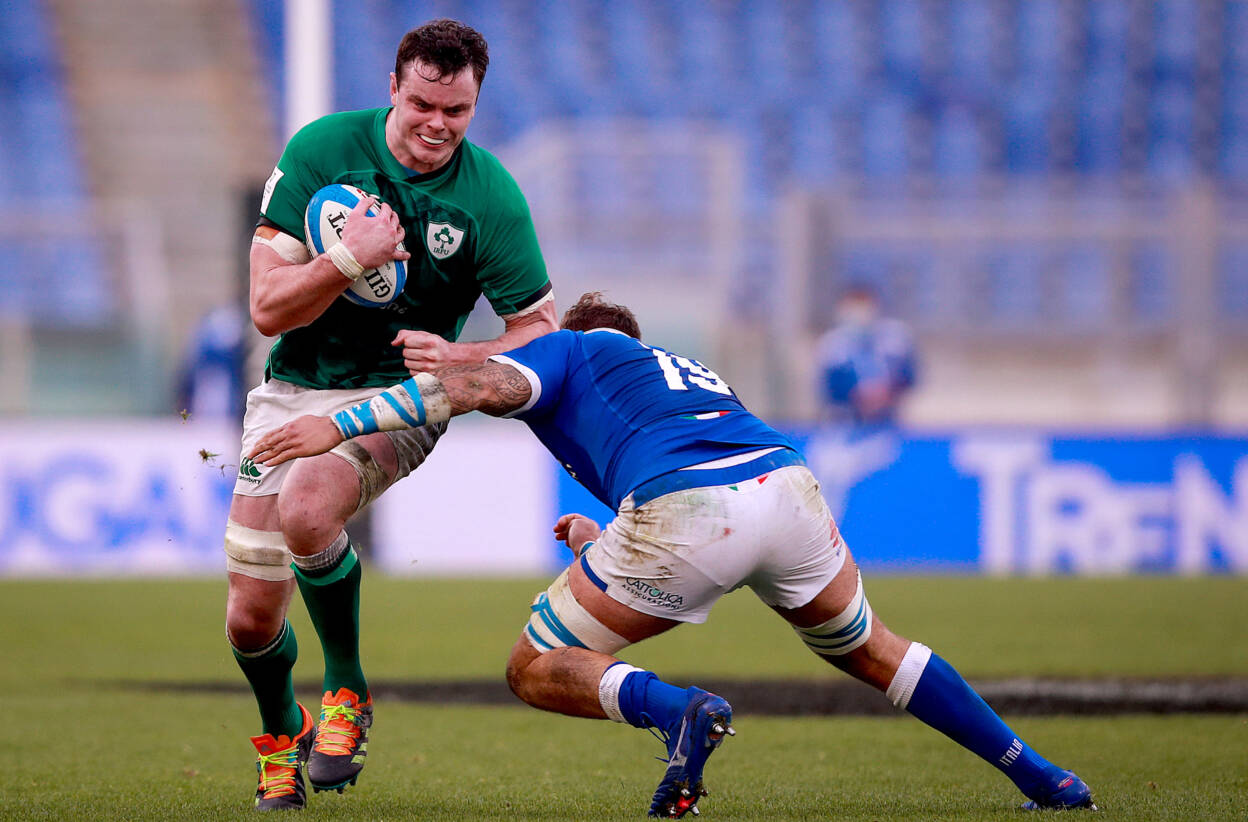 The Italy game also heralded the introduction of Ryan’s Leinster colleague, Ryan Baird, to the Test arena. Baird has risen up the ranks since helping the Ireland Under-20s to win a Grand Slam in 2019 and already has 19 provincial caps under his belt.

Like Ryan, and a number of others within the provincial and international system, Baird is a graduate of St. Michael’s College on the south side of Dublin.

Indeed, Ryan’s younger brother David played alongside the 21-year-old at both Junior and Senior Cup level in the Leinster schools Competitions. Asked about Baird, Ryan noted:

He looks so powerful whenever he carries the ball. He moved to Michael’s in third year, I think. I think I was in sixth year when he first came to the school. I would have seen him growing up.

“He was always one of those players that stood out very clearly – even from an early age – and he’s continued in that manner. He’s unbelievably athletic, obviously. So quick and powerful, and very talented.

“It’s brilliant to have him on board and I think second row is an area where there’s really a lot of depth now in the team. Hendy and Ryan, Tadhg Beirne can play there. Obviously Quinn Roux, Ultan Dillane, who is having a great season as well. There’s a number of guys there now, which is great.”