It would have been late on Saturday night when George Clancy eventually got the opportunity to sit back, take it all in and reflect on 17 years as a professional referee. Hours previous, he had blown the final whistle at the Liberty Stadium, bringing the curtain down on his distinguished career in the middle, having taken charge of his 125th and final Guinness PRO14 game.

The current world we live in means there was no post-match beers in the dressing room with his Assistant Referees, nor no grand farewell. It was straight back on a plane from Wales, a journey he had made countless times down through the years, but one that carried greater resonance this time around.

“It has been an unbelievable journey over the last 17 years or so,” Clancy says, as he steps away from the professional game to take up a position as a senior manager in the Irish Civil Service.

In addition to his 125 PRO14 games, the Limerick native officiated 75 Heineken Champions Cup fixtures, 46 internationals, refereed at two Rugby World Cups and was involved in some memorable Guinness Six Nations and Rugby Championship occasions. He hangs up his whistle with a decorated and hugely impressive CV.

“I don’t think I could sum it all up in one answer,” he continues. “Starting off in the Munster Junior League, it has exceeded all expectations and I’ll reflect on my career with a lot of pride in the months and years to come. It has been a brilliant journey with so many standout memories and refereeing has given me so many opportunities – to make great friends, to travel the world, to keep fit and to be involved in some of the biggest sporting occasions.”

Chief among them is the 2011 Rugby World Cup opener between New Zealand and Tonga in Auckland.

“That was a huge honour,” the 43-year-old – who went on to referee three more Pool stage games at that tournament and was also involved at the 2015 Rugby World Cup – explains. “To referee the opening game of the World Cup is massive and looking back on it now, you get to appreciate it more. The eyes of the world are on you for that particular game and you’re expected to carry the torch and set the standard for the tournament.”

Asked about his favourite games, Clancy laughs: “It’s a question I get asked a lot and always answer it differently each time. I suppose that’s a good thing as I always struggle to choose from 20 or so games. Two fixtures that are always at the front of my mind are England and France in the Six Nations and then New Zealand and South Africa in the Rugby Championship. Just incredible occasions to be part of really.”

From breaking into the All-Ireland League panel, to making his Celtic Cup debut in October 2004, Clancy was among an elite group of Irish officials, joining the likes of Allain Rolland, Alan Lewis and John Lacey at the very top of the professional game, while Joy Neville, Frank Murphy, Sean Gallagher, Chris Busby and Andrew Brace continue to fly the flag on the world stage for the IRFU. 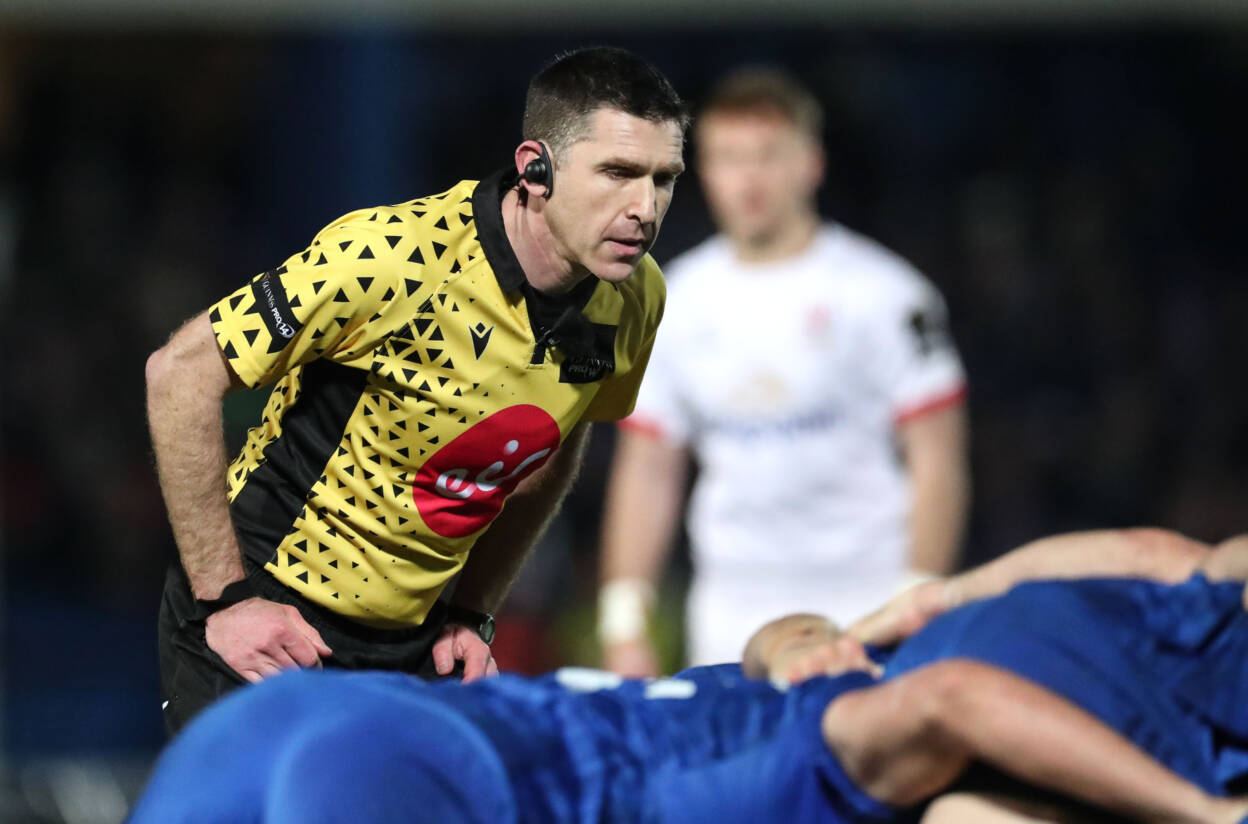 Reflecting on the transition he made to the professional game, Clancy said it was always a great source of pride to represent Ireland and the IRFU when taking charge of big international Test matches all over the world.

“There’s no doubt it’s at the back of your mind, that you’re representing Ireland,” he explains. “And it’s important because the IRFU puts a huge amount of resources behind us to ensure we’re the best we can possibly be. We’ve a very proud tradition of refereeing in Ireland, officials who have refereed World Cup Finals and so on. That’s a tradition you always have to work hard to maintain and certainly with the advent of professionalism, we’re in as strong a position as ever before.

“The work of Dudley [Phillips, IRFU’s Head of Referees] and Johnny [Lacey, IRFU High Performance Referee Coach] means we are always progressing and getting better. We’ve seen that in recent years with the emergence and strong performances of Joy and Andy Brace among others. It’s a really exciting time for Irish referees and I couldn’t recommend it enough as a brilliant career to be involved in a sport we all love.”

To remain at the highest level of the game for close to two decades has required Clancy to show resilience, both on and off the pitch, strength of character and fortitude to ensure a diagnosis of Type 1 diabetes (T1D) did not derail his career.

“The best way for me to control the condition is exercise and keeping fit,” he says. “The programmes put together for us by Ed Slattery [IRFU Sevens Athletic Performance Coach] mean we’re as fit now as ever before. And that’s something I’ll miss. The camaraderie with the other referees during tough fitness sessions.

“I’d like to think other Type 1 diabetics can use me as an example of someone who hasn’t let the condition hold them back and if that helps just one person, then it’ll be nice to get the message across. You can remain at a very high athletic level and be involved in sport at whatever level if you want and I’d really like to help other people out who might face the same challenges.”

As he hangs up his whistle, Clancy’s immediate focus is on his new role in the Civil Service but having been involved in rugby since his early days with Bruff RFC, he’s not prepared to walk away from the sport just yet.

“I do hope to stay involved in refereeing in the future and I hope I can contribute to the domestic game,” he adds.

Commenting on Clancy’s career, Dudley Phillips, the IRFU Head of Referees, said: “George has been an integral member of the Irish Referee team for many years, adding to our success through his professionalism and dedication to all his role. I would like to congratulate George on all he has achieved and look forward to continuing to work with him in the future.”