Ireland captain Jonathan Sexton in action during the 50-17 bonus point win over Italy, which has them sitting at the top of the table going into the final round of the Guinness Six Nations ©INPHO/Billy Stickland

Ireland captain Jonathan Sexton is hoping that a strong focus on team performance can help them to achieve their desired result in the Guinness Six Nations finale against France.

In all likelihood, Andy Farrell’s side will require a bonus point triumph on Saturday night in order to secure the Championship title for a fourth time in seven seasons.

Speaking at the latest media conference from the IRFU’s High Performance Centre, Sexton said: “All we can control at the moment is our performance. What we’re trying to emphasise to everyone in the squad is that we need to get our performance right, no matter what.

“If it’s just a win, if it’s a bonus point win, we’re still going to have to play well. No matter what. Let’s just focus on that aspect.

“We know that if we can perform well, that we’ll give ourselves chances. Then it’s up to us to try and take those chances on the day and be clinical.”

On their last trip to Saint-Denis in February 2018, Ireland were put through the ringer before eventually claiming the first of five victories on their way to a Grand Slam success.

Just when France looked set to secure the spoils, talismanic out-half Sexton stepped forward to slot a 83rd-minute drop goal attempt between the uprights – after a staggering 41 phases.

Given what has transpired in both the sport and the world since that day, Sexton admits it feels like a lifetime ago. Yet, he is glad to be returning to the venue with a shot at Six Nations glory and believes Ireland’s destiny largely remains within their own hands.

A lot has happened since. It does feel like a long, long time ago, but it’s great to be back in that situation now where we’ve got a trophy on the line.

“We know it’s in our own hands in many ways, no matter what happens in the games before it. We’ll still be going onto the pitch being able to win the trophy, which is what you play for. You train hard for these big days.

“We’re looking forward to it now and like I said, we’re just trying to concentrate on our performance. Make sure if we can get that right, it gives us a chance.”

When Sexton landed that high-pressure strike through the French posts, he did so in front of a crowd of 74,878. Their latest encounter will be world’s apart, however, as Covid-19 restrictions means it will be held behind closed doors.

While conceding there are pros and cons to this set-up, Sexton generally feels it could be an advantage on the night for Ireland.

“Depends what way you look at it. I’ve been in the Stade de France before where the crowd have turned on them. Then it can become a positive for us and a negative for them.

“You can look at it whichever way you want. It’s obviously more like a neutral venue. Obviously they’ve played there last weekend (against Wales) and they’ll be familiar with it.

“Obviously we’d prefer to play in an empty stadium than play with 80,000 French supporters. It is what it is. It’s not ideal. A part of me wishes there was a crowd there. We missed it, we miss the supporters. Hopefully we won’t be too long getting them back out.” 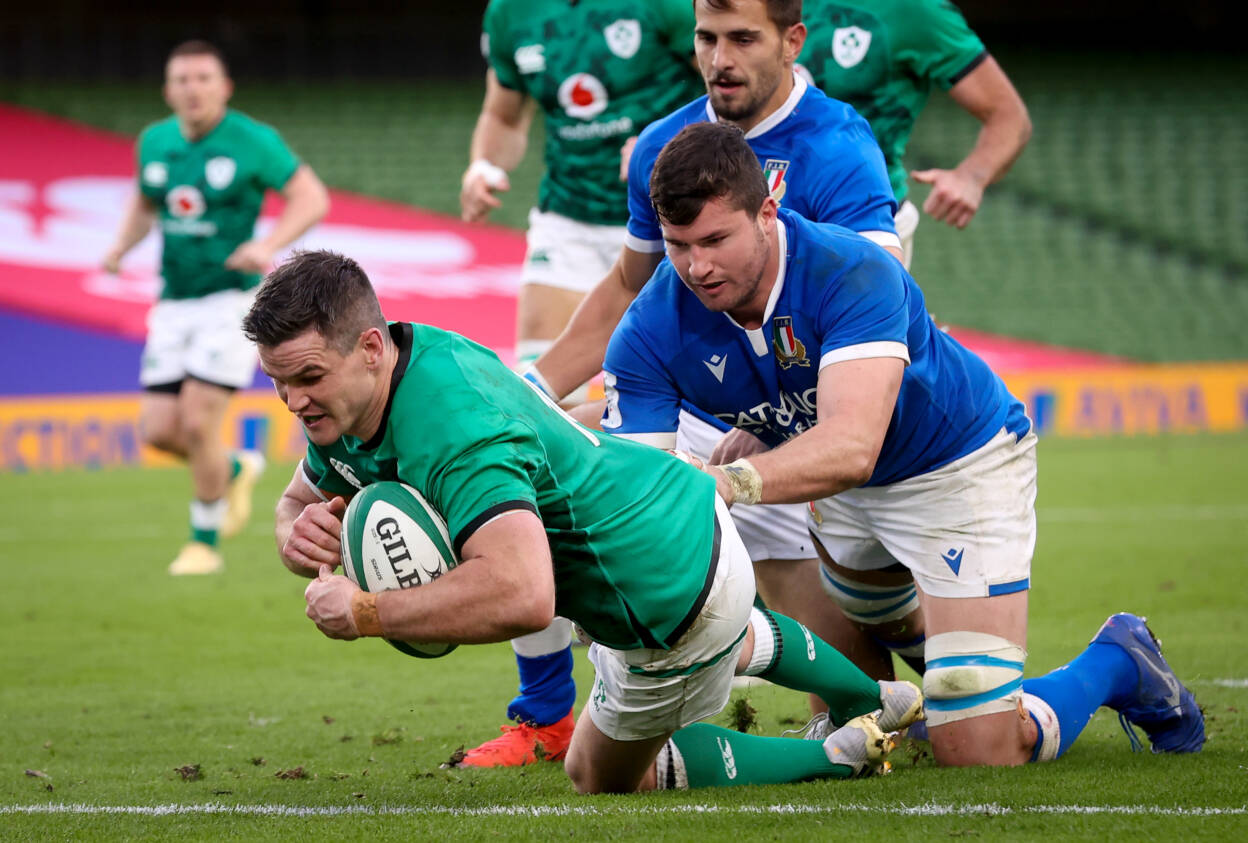 Courtesy of a run of victories over England, Italy and Wales in the spring, a rejuvenated France are also in the mix to be crowned Six Nations champions for the first time in 10 years.

They did hit a speed bump in round four back when losing 28-17 to Scotland in Edinburgh. Still, there has been enough in their displays to date that suggests they are more than capable of finishing the campaign on a real high.

Thanks to his previous stint with Racing 92 – and his regular duels with Top 14 outfits in the Heineken Champions Cup – Sexton is well aware of the problems this French team can pose.

“I think just their ability to score out of nothing. That points to the individual flair that they have. (Antoine) Dupont, (Romain) Ntamack at half-back. You saw them against Wales last weekend. It looks like Wales are defending well and out of nowhere, they’re gone,” he noted.

(Virimi) Vakatawa has obviously been in great form. (Gaël) Fickou has been doing well. From a backs’ point of view, they’ve just got threats throughout.

“We’re just going to have to be unbelievably connected and together (in defence), because if you show them those big gaps, they’re through it pretty quick.

“Then up front they’ve got power. They’ve got big men and lots of power. It’s a big ask, we know that, but we’re preparing ourselves for a big performance.” 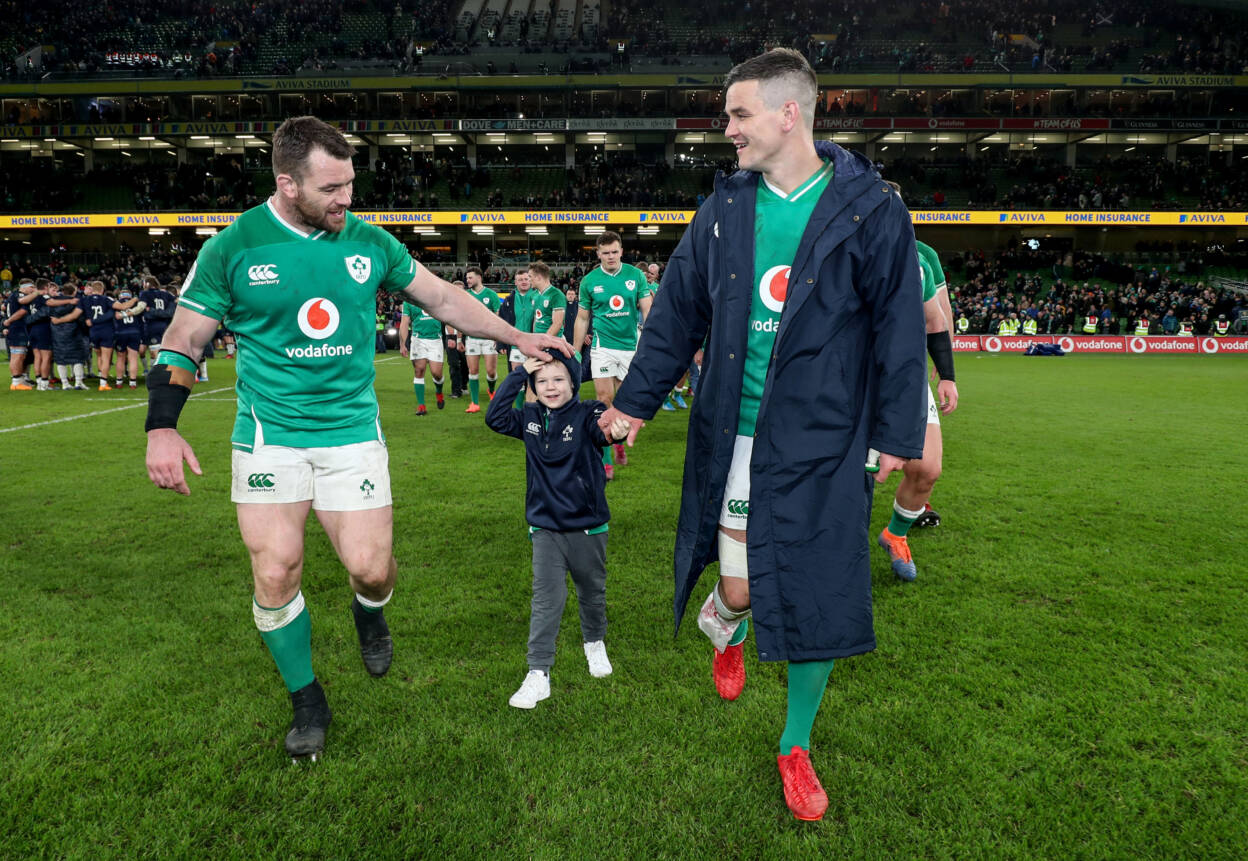 Throughout the majority of his successes with both Leinster and Ireland in the past decade, Sexton has been joined on the field by the ever-dependable Cian Healy.

The 33-year-old prop is in line to collect his 100th Ireland cap on Saturday. For Sexton, you only have to look at the other Irish centurions – such as former number 10 Ronan O’Gara – to fully appreciate how impressive an achievement this is for Healy.

If he gets picked, it’s an incredible feat. You look at the guys who have 100 caps, the special players they are. You don’t get there easily. Every player that’s in that category are legends of the game really in Ireland.

“I think he’ll add himself to that legacy if he gets that hundredth cap. Cian deserves it, he’s so professional in the way he goes about his business.

“He’s had one particularly bad (neck) injury, which he took a while to get back from. Once he did, he put an unbelievable amount of work into getting himself back. I’m absolutely chuffed for him.

“I’m very good friends with him obviously, first and foremost. I know his family very well and his wife Laura. I know they’ll be so proud of him. It’s another little layer onto our story.

“If it is his 100th cap, we want to honour him in the best way possible which would be trying to win the game. It was the same last week when we were playing first-cappers. We wanted to make the day special for them.”