Life has certainly been hectic for teenage winger Beibhinn Parsons since her last appearance for the Ireland Women’s team back in early February.

Following her scintillating try against Wales in a Six Nations triumph at Energia Park – her third touchdown in just three Championship starts – the Ballinasloe native stepped away from the squad to concentrate on her impending Leaving Certificate examinations.

Within a matter of weeks, however, schools across the country were closed indefinitely in a bid to combat the Coronavirus pandemic and Ireland’s Six Nations campaign was also placed on hold.

Like the remainder of second level students, Parsons never got to sit in an exam hall and instead had to rely on calculated grades to determine her path into college life.

“I’d loved to have wrapped it up, put a bit of closure on it and get a result that you know you’d deserved. I would have loved to sit the exams.” 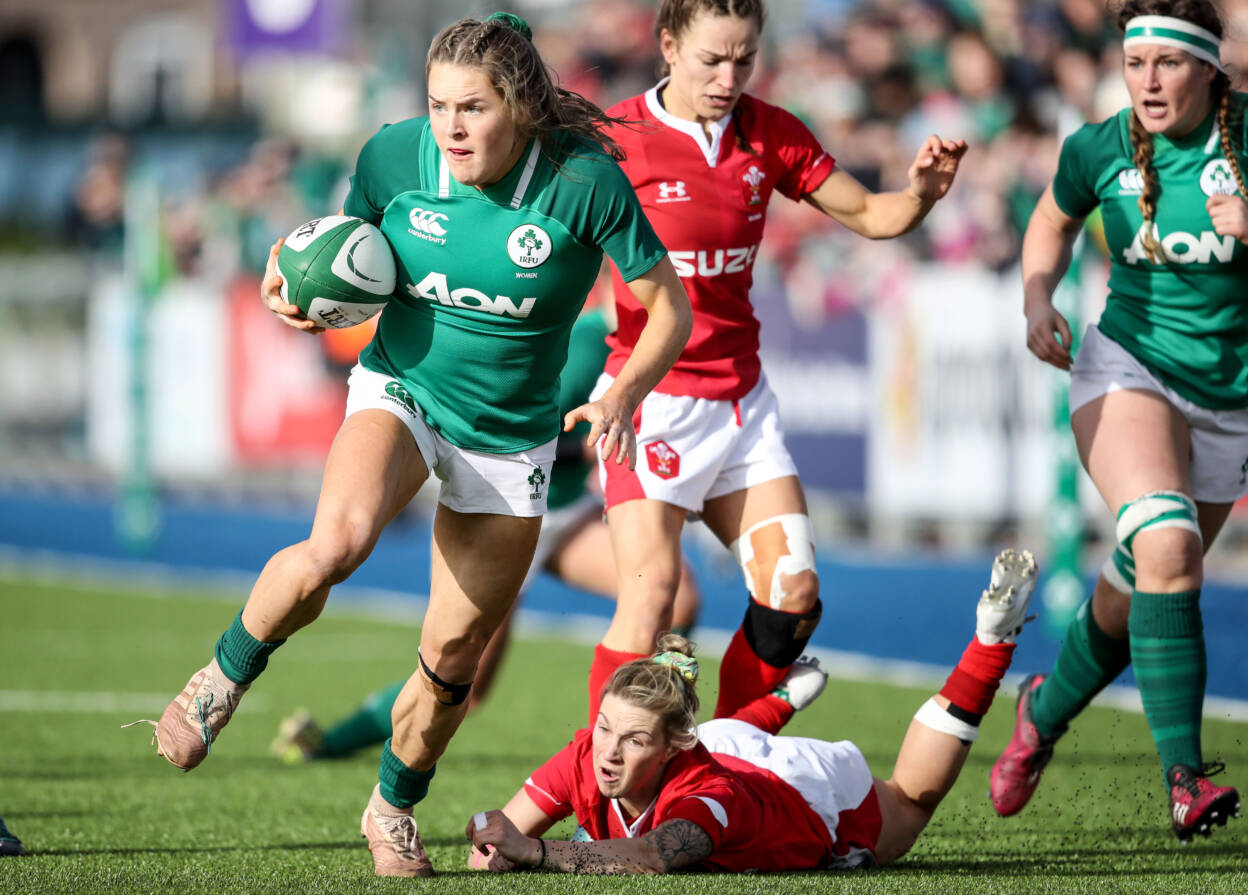 Parsons is also going against the grain when it comes to her third level experience. An Ad Astra student in UCD where she is currently studying Biomedical, Health & Life Sciences, the Galwegian is presently based on campus.

Similar to the Ireland squad’s get-togethers and training camps at the IRFU High Performance Centre, this requires extra caution on her part, but she is managing just fine so far.

“I’m doing a science subject, so there’ll be labs but all the protocols are in place. I’m feeling safe in my college set-up,” she said.

“Keeping my bubble to an absolute minimum because I don’t want to put myself in jeopardy or any of my team either. Just three house-mates and that’s my social circuit. Keeping it that small.”

With just some internal games with Ireland and her new club Blackrock College under her belt, Parsons could be forgiven for lacking match sharpness ahead of this Saturday’s Six Nations clash with Italy in Donnybrook (kick-off 6.30pm).

Nevertheless, having kept well on top of her fitness levels during lockdown, the 18-year-old Connacht winger will not be found wanting if selected.

We worked really closely with our strength and conditioning coach (Orlaith Curran) through Zoom and phone calls. For girls who didn’t have weights, we used body weight exercises.

“Our strength and conditioning didn’t stop at all and lots of us used the time to treat niggles and injuries. Rehab and come back stronger and fitter.

“Actually a positive in that sense. The competitive edge is still there. Not worried at all because we’re all competing for jerseys. We’ve hit the ground running and are really excited to play Italy.”

Since making her debut as a 16-year-old against the USA in November 2018 – becoming the youngest ever player to earn a senior Ireland cap in the process – Parsons has generally looked unfazed by any challenge that is placed in front of her.

Still, the Ardscoil Mhuire alum often looks on in awe at the company she finds herself in during these international windows.

Being part of a back-three, Eimear Considine is an amazing athlete. I feel she has more hours in the day than anyone I know. She’s just a super human and gets everything done and her skills are through the roof. On her level would be Sene Naoupu.

“She’s amazing, such a bank of knowledge and experience that I love to pick at. The likes of young girls like Dorothy (Wall), she’s so skilled at a young age. There’s a broad range of players that are really skilled.”

An already strong Galway representation within the squad has been bolstered by the return of Claire Molloy to the Ireland fold. Due to work commitments, the influential flanker sat out last November’s Test against Wales and the opening three rounds of this year’s Six Nations.

She always intended to make a return at some point, but she has now bounced back to join fellow Tribeswomen Parsons, Cliodhna Moloney, Ciara Cooney and Hannah O’Connor in Adam Griggs’ set-up. Parsons acknowledged:

There’s a strong Galway contingent in the team and I’m a proud Galway girl and proud Ballinasloe girl. Claire’s a professional in everything she does. Ticks every box before training. Warm-up, conditioning. A full well-rounded player.

“I love training with her and love seeing how she carries herself. Of course she has a bank of knowledge as well and provides such a boost to any squad she walks on to.”

The presence of Griggs as head coach has undoubtedly helped Parsons to settle into what can be a high-pressured environment.

She had previously worked with the former Lansdowne and Leinster ‘A’ scrum half during her time with the Ireland Under-18 Women’s Sevens side, and his understanding made it a lot easier for Parsons to achieve a balance between sport and school over the past 18 months. 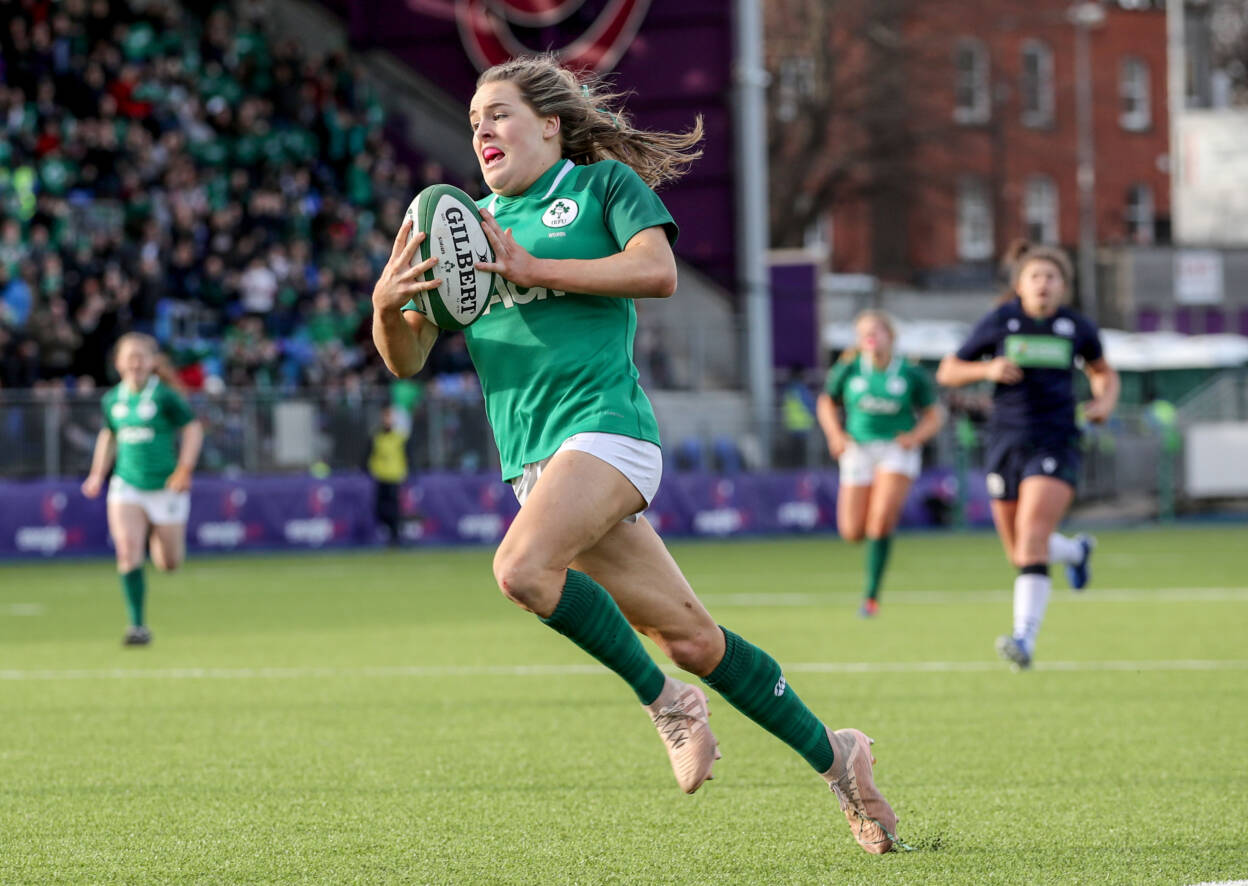 “I won’t lie and say it’s easy. Of course it’s difficult but it just means I have to be organised. Last year was a huge year for me, doing my Leaving Cert.

“I just had to be organised and be honest and say, ‘here Griggsy, can we have a chat, can I see how we’re going to manage this?’, and they were more than accommodating.

“We sat down and picked out training that I could go to, matches that I could go to and couldn’t go to. That’s just what had to be done. I’m getting used to juggling it. I’m not sure if it makes it any easier but you just have to be organised.”

Parsons was speaking at Canterbury’s launch of the new Ireland Women’s Rugby home jersey, which is now available for the first time in a non-World Cup year. She sees this as the latest chapter in an exciting development within the game and hopes this growth can continue into the future.

I think the 20×20 movement has been amazing and girls now doing their Junior Cert can see lots of Irish players. In that short period, Women’s sport is so much more in the limelight, where it should be! Where it deserves to be.

“I know for people my age now they have the ability to watch Women’s rugby and buy a Women’s jersey which is huge in my eyes.”