Two of the Ireland squad's uncapped players, Hugo Keenan and Shane Daly, are pictured during a training session at the IRFU High Performance Centre in Blanchardstown ©INPHO/Billy Stickland

Ireland centre Garry Ringrose believes the upcoming Guinness Six Nations games against Italy and France can offer a much-needed boost to their army of supporters during these turbulent times.

On the eighth occasion since the safe return of rugby to these shores, the Aviva Stadium will play a host to a behind-closed-doors fixture this Saturday, when Andy Farrell’s Ireland entertain Italy in a 3.30pm kick-off.

Ringrose has played in four of these seven games to date (all for Leinster) and has his sights set on picking up a 30th Ireland cap in the much-delayed round four clash with the Azzurri.

“We’re in a very privileged position to be able to carry out our job, because I know some people aren’t as fortunate,” insisted the 25-year-old Dubliner, speaking at Monday’s remote press conference from the IRFU’s High Performance Centre.

Some people are at home, whether it’s elderly on their own or people trying to work from home who have young kids. People with mental health issues, who are finding it tough at home. We’re incredibly lucky to be able to come in and do what we do.

“There’s huge motivation and excitement within training. Guys want to put their hand up to be on the pitch come Saturday, because obviously there’s an incredibly tough challenge in Italy coming around the corner.

Whilst Ringrose has been joined by 14 of his Leinster team-mates, there is one notable absentee. Following a shoulder injury sustained in the province’s recent Guinness PRO14 win away to Benetton Rugby, Jordan Larmour will be sidelined for a period of up to 16 weeks.

Ringrose was naturally disappointed to hear the versatile back was ruled out of a busy schedule for both Leinster and Ireland.

“I’m gutted for Jordan. You never like seeing anyone pick up an injury, but it’s kind of just the nature of the game unfortunately. We’ve all been there.

“I’m gutted timing-wise for him, coming into this block internationally. I know he’s someone that would have been mad excited to attack the opportunity that we have.

“Jordan’s such a quality player and I love playing with him and learning off him every time we play. He sees things and does things that a lot of us can’t do.

“I definitely miss him in that regard and I know all our thoughts are with him to get his body right, and I’ve no doubt he’ll be humming come a few months’ time down the line.”

Larmour had been Ireland’s first choice full-back since Farrell took over as head coach and was in line for a fourth consecutive start under the Wigan man.

The number 15 jersey is now very much up for grabs, with uncapped duo Hugo Keenan (Leinster) and Shane Daly (Munster) amongst those in the reckoning for the pivotal role. 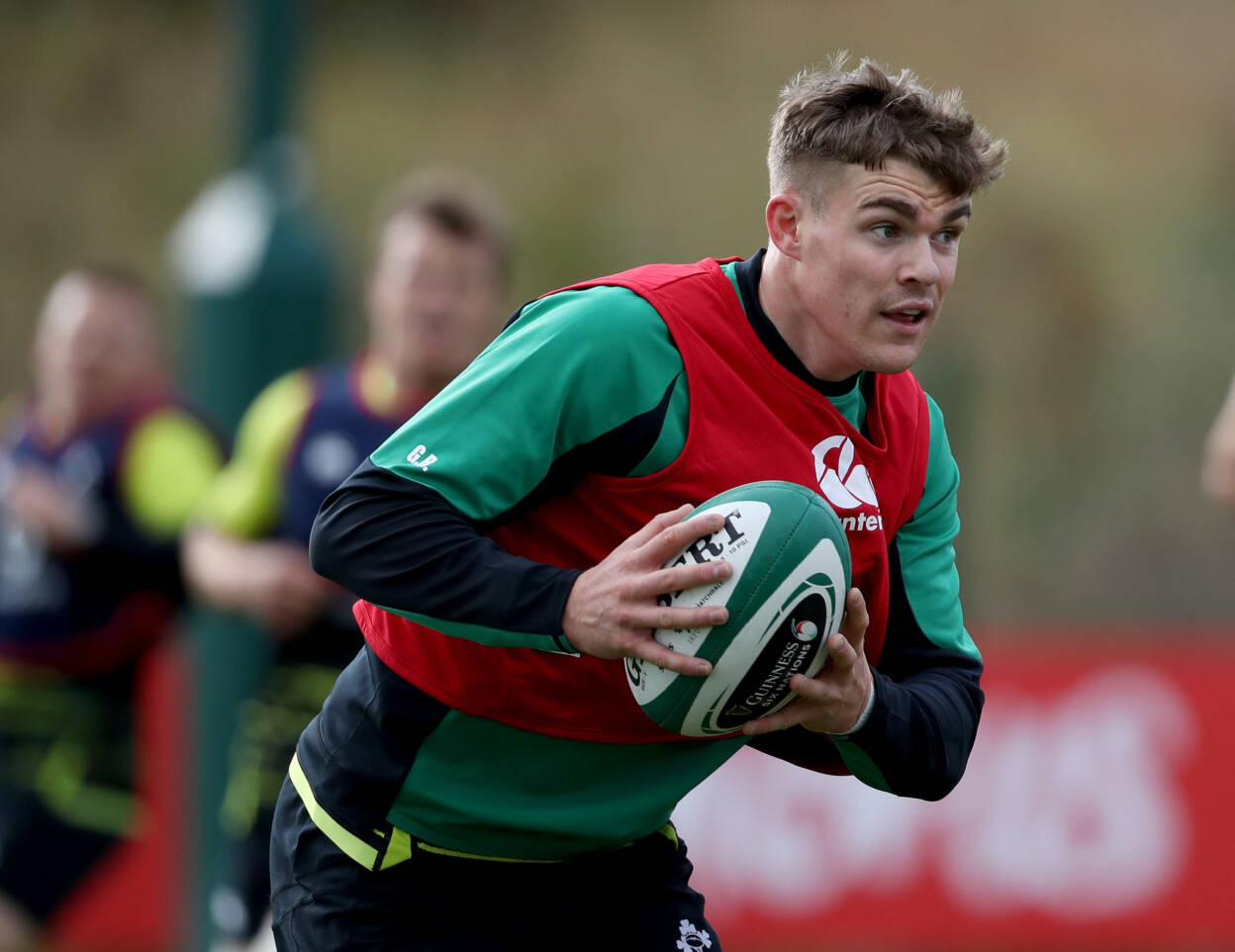 Ringrose has first-hand experience of Keenan’s capabilities in the position – following a previous run of games for Leinster on the right wing – and is also aware of the attacking threat that Daly can pose.

“Both equally deserve to be in the position they are and they certainly haven’t slowed down in training. The pair of them have adapted incredibly quickly. I knew all the coaches would encourage everyone to have a point of view and a voice. Be honest with each other.

“Whether you’ve a hundred caps or whether you’ve no caps. The pair of them have been brilliant so far in training and I’m excited to see what more they can provide.”

Another of Ringrose’s provincial colleagues who will be hoping for a chance to impress in this window is impish scrum-half Jamison Gibson-Park. Farrell has spoken recently about the Auckland native’s willingness to play heads-up rugby and this is a style that is being actively encouraged within the Ireland set-up.

“That’s what we’re always encouraged to be. Play with our heads up and again that might be seeing space on the front line to carry the ball or take it to an edge,” explained Ringrose.

“Even on top of that, if they have back-field cover, maybe it’s contestable through kicks from the 9s, 10s or 15s. It has been encouraged to act upon the picture you see and the coaches are definitely giving us the tools and providing us with the advice and guidance of what to do in certain situations. It has been great so far.” 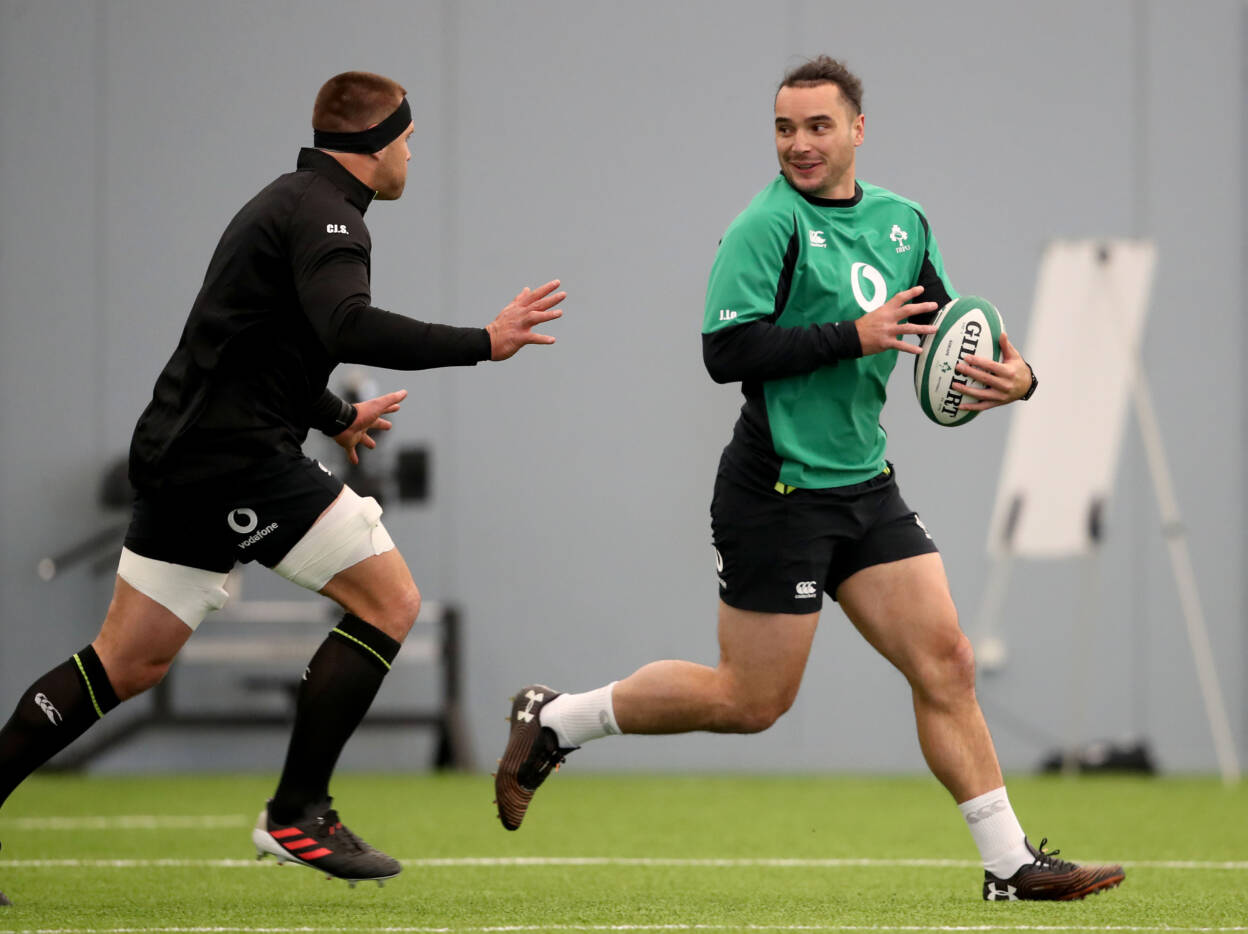 The already sizable Leinster contingent in the Ireland camp is set to expand for the Autumn Nations Cup, when winger James Lowe becomes available for selection through World Rugby’s residency rule.

Lowe will continue to train with the squad in advance of their Six Nations matches and Ringrose is excited to see what the former Super Rugby star can deliver in green.

He noted: “There’s massive competition amongst the back-three there. He’s adding to that obviously with what he has done previously for Leinster and equally, like the other two guys (Keenan and Daly), he has adapted incredibly quickly.

“He has shared his point of view and tried to help others around him, as well as settle in and do his own job right. Equally, it has been no problem to him.

I think James is a great guy to have around the place and he’s getting on with everyone. Like I said about the other lads, I’m excited to see what more he can offer. Because it’s obviously massive competition amongst the whole back-line. Everyone enjoys each other’s company and gets on.

“It’s a great connection amongst the group, but then obviously there is that competitiveness and pressure amongst us all in training, which brings the best out of us all.

“Hopefully come Saturday, whoever goes out there, it brings the best out of them. It’s definitely a great environment to be a part of, especially with some of those new faces in as well.”