Lockdown has changed the pace for Victoria Dabanovich O’Mahony. The stunning setting of Sarnia, with its picturesque lakes and soaring early summer temperatures, makes it easier to recalibrate and readjust to life back home, after the handbrake on her rollercoaster ride was abruptly applied almost three months ago now.

While the disappointment of having her maiden Women’s Six Nations campaign curtailed after three games lingers, the break has given Dabanovich O’Mahony the chance to breathe. And reflect. There are no lectures to attend, no exams to study for, and no training sessions to fit into the schedule. The freedom of whiling the hours away on the beach, or with old friends on the water, has been an unexpected luxury. A throwback to childhood years. An opportunity to catch up.

It’s the first time the Ireland international has been at home in Ontario with her family since moving to boarding school at the age of 13. From Ridley College in St Catharines, a short drive from Niagara Falls, Dabanovich O’Mahony made the decision to follow in the footsteps of her father and grandfather by studying Medicine in Ireland, having previously traced her Irish heritage during whistle-stop tours of these shores as a child.

“It was a challenge moving back in with everyone at first,” she laughs. “But being able to spend time with my family has definitely been a bonus and it has been great to see everyone. I’ve been able to maintain my training schedule thanks to a local gym that supplied me with equipment and while it has been very warm here recently, I couldn’t ask for anywhere better than the outdoors here to get my running done.”

It wasn’t long after Ireland’s remaining Six Nations fixtures against Italy and France were postponed that the 19-year-old learnt her college lectures and second year exams from Royal College of Surgeons (RCSI) were also cancelled and moved online, allowing Dabanovich O’Mahony to book an unplanned flight home.

Having last week completed her exams thousands of miles from the St Stephen’s Green campus, Dabanovich O’Mahony has been able reset in the company of her parents and younger sisters, while taking stock of a whirlwind 18 months that have seen the teenager embark on a new, exciting chapter in Ireland.

“It was a massive debate in my head,” she says of the decision to leave home and cross the Atlantic. “I was 17 when I moved over to Ireland by myself. It was a lot to think about and I spent a lot of time deliberating the pros and cons – but ultimately I had to take the leap and fortunately it has all worked out. I just had to go for it because I knew that’s what I wanted.”

Although a big step, her leap wasn’t completely into the unknown. She had fond memories of those trips around Ireland with her father, John O’Mahony, and having toured this country with the Ontario Under-18 team in 2017, during which the tourists played games against Leinster, Munster and Ulster, Dabanovich O’Mahony was attracted to the idea of studying and advancing her rugby career here.

There was also a strong family connection to Irish rugby. Her uncle, Billy O’Mahony, and grandfather, Michael O’Mahony, both played for Munster, while her great-grandmother, Betty O’Mahony, was president of Abbeyfeale RFC from 1972 to 1993, and in doing so became the first female president of an Irish club. 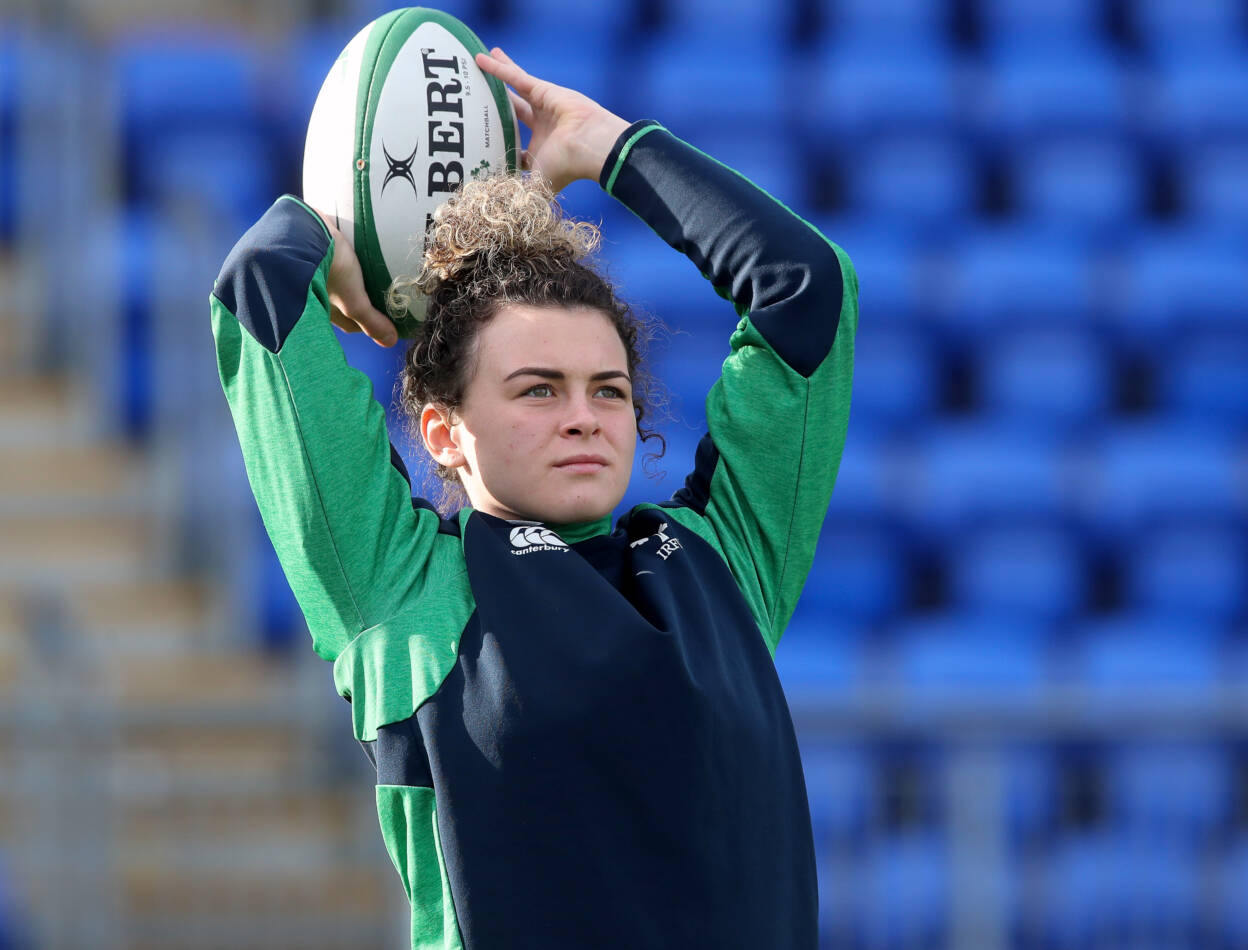 “I grew up in Ontario throwing a rugby ball around the back garden with my Dad,” Dabanovich O’Mahony continues. “Rugby was always my sport and for as long as I can remember I’ve dreamed of playing international rugby. The tour to Ireland with Ontario planted the seed really. To play against three of the provinces and see how competitive the game was over there and experience all of that really solidified my decision to move.

“The big thing was also to be able to pursue my career in medicine while playing rugby and once I knew I could do that with RSCI, the move to Ireland was always going to be my best option to become a better rugby player.”

Having settled into Dublin ahead of her first term in RSCI in September 2018, Dabanovich O’Mahony joined Old Belvedere.

“When I first came over I started on the Old Belvedere second team,” she says, looking back. “And that showed you the difference in levels between Canada and Ireland. I was on the best provincial team in Canada before moving over and suddenly I had to start at the bottom again. But I was ready for it. I knew I was going to have to work hard if I wanted to make it happen.”

Dabanovich O’Mahony made no secret of her ambitions. In a meeting with one of the Old Belvedere coaches, she outlined a five-year plan that would see her progress through the grades, represent Leinster and then achieve her ultimate goal of pulling on a green jersey. What she didn’t forecast, however, was the speed at which she would embark on the journey, with the young hooker’s commitment, drive and hard work catapulting her straight into the plans of Ireland Head Coach Adam Griggs.

A little over a year after arriving in Ireland, Dabanovich O’Mahony made her senior international debut in the November Test against Wales in UCD, having impressed during Leinster’s Inter-provincial title victory in 2019 and her application and performances cemented her place in Griggs’ 2020 Six Nations squad.

“The first time I got to put on the green jersey in front of the home crowd, I had so many emotions running through me,” she explains. “It’s a day I’ll never ever forget – and my family travelled over from Canada for the game which was incredible really. To have my parents there in UCD for my first cap was extra special.”

More was to come. In early February, the O’Mahonys were back in Dublin, this time for their daughter’s Six Nations debut as she came off the bench in the Round 1 victory over Scotland at Energia Park. After Cliodhna Moloney was forced off in the first half, Dabanovich O’Mahony was sprung into action earlier than she expected.

“My family are my biggest supporters and my younger sisters also came over for the Six Nations games,” the 19-year-old says. “I was only expecting a couple of minutes off the bench against Scotland so to come on in the first half was a real test but I loved it. And to have my family in the crowd to go and celebrate with after a hard-fought win was amazing. 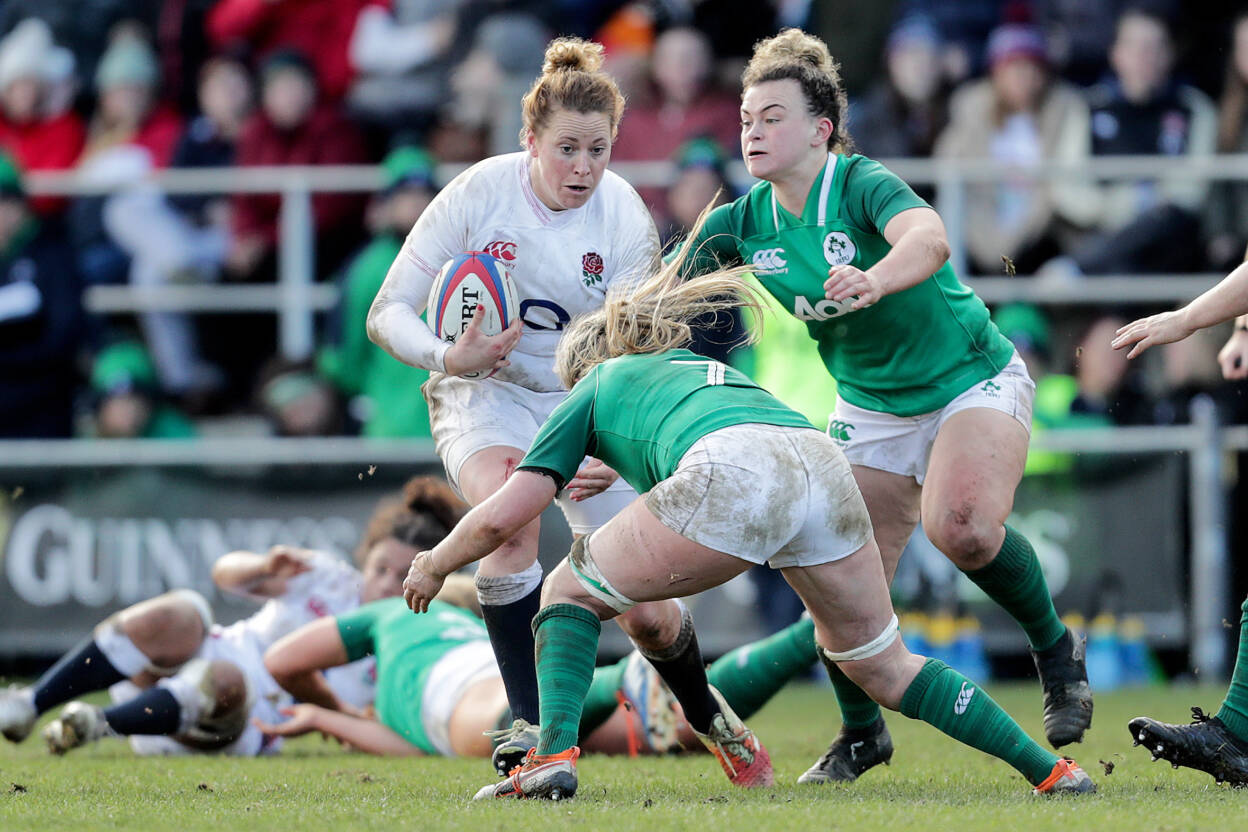 “Those days, during the Six Nations and even in the build-up to it, they’re probably some of my proudest moments and the best few few months of my life. It’s hopefully something I can keep going for the next few years and I can’t wait to get back to Ireland to start working hard with the rest of the girls again.”

While Dabanovich O’Mahony was an unused replacement in the Round 2 defeat of Wales, she won her third international cap against England at Castle Park before the onset of Covid-19 forced the postponement of the rest of the Championship campaign.

As part of a new wave of promising young players in Griggs’ squad, including Beibhinn Parsons, Dorothy Wall and Judy Bobbett, Dabanovich O’Mahony – a dynamic and athletic ball-carrier – made light work of her initial five-year plan, but the Medicine student appreciates there is more hard work to come as she looks to develop as an international player.

For now, the immediate future remains uncertain but Dabanovich O’Mahony – as is the only way she knows – is fully committed to her training programme to ensure she is ready for the day she can get back on a plane and return to Dublin to link up with the rest of the Ireland squad again.

“This time has given me the chance to take a breath and reflect a bit on what I’ve achieved,” she adds. “It just makes you strive more to get back to that level and makes your appetite for success bigger. I loved every minute of the Six Nations and even as a new player coming into the squad, I was made so welcome by all the girls.

“We’re all there for one reason, to work together to reach our goals and one of those is reaching next year’s World Cup. We’re all in it together and when you have your dream in one hand and your aspiration in the other, you don’t want to let go of either. The only thing to do is work hard and give it your best shot.”

Born and bred in Canada, but with Irish rugby in her blood.