Amid the positivity, a courageous admission of imperfection. Hannah Tyrrell has never shirked from the responsibility, nor evaded the issue of mental health. Not since she let the world in on her own troubles five years ago now, her brave and open interviews in the public domain positioning the Ireland Women’s and Sevens international at the forefront of an important conversation. A role model, a spokesperson, an ambassador, an inspiration. It’s okay not to be okay.

The post, captioned ‘Instagram v Reality’, appeared on Tyrrell’s feed earlier this week. “Just a reminder that what you see on Instagram, isn’t always the full truth,” she wrote, having just completed a conditioning session. The accompanying photos – one of which shows the 29-year-old sitting down, in visible pain and during a moment of vulnerability – provided a powerful message during Mental Health Awareness Week. Here is an international rugby player, at the peak of her powers and in prime physical condition, letting the guard down. No filters, no edits, just the truth. “This is a more accurate representation of me post conditioning,” she added.

The nature of the social media post may be the exception rather than the norm, but Tyrrell understands first-hand the importance of ensuring the topic of mental health remains part of our lexicon every day of the year, rather than during just one week of the year or one campaign.

Since opening up about her battle with an eating disorder during her teens, Tyrrell has worked tirelessly in recent years to normalise the conversation and through her work with Pieta House, for whom she is now an ambassador, has helped those who find themselves in similar situations, empowering them to seek support.

In addition to Tyrrell’s association with Pieta House, both the Ireland Men’s and Women’s Sevens squads have a deep connection with the mental health charity and have for a number of years taken part in the annual Darkness Into Light fundraiser, whether they’re at home or using their platform to spread the message whilst on the road around the world.

While this year’s Darkness Into Light walk could not take place due to Covid-19, the Sevens squad – led by Tyrrell and Stacey Flood – instead hosted an online HIIT workout to raise vital funds for Pieta House, and their 30-minute Saturday morning session not only had upwards of 100 people doing burpees and squats in their back gardens and living rooms but, more importantly, raised close to €2,500 for the charity.

“To be able to raise that amount of money by simply letting people join our HIIT session is incredible,” Tyrrell tells IrishRugby.ie. “For every €1,000 raised, that gets one person through a set of counselling with Pieta House so knowing we’ll be able to help people get the help they really need is great. It’s so worthwhile and it’s a great way for our teams to come together and show we all care about each other and our mental health, but also really care about spreading the messaging and to show others in our communities that it’s okay not to be okay.”

In addition to the Ireland Sevens squads, members of the Women’s XVs – including Anna Caplice and Aoife McDermott – were involved in the fundraiser, while players from the French Women’s Sevens squad also joined to show their support, further underlining the role Tyrrell and her team-mates have played in destigmatising the conversation around mental health in elite sport.

“As someone who struggled with my mental health as a teenager, I wasn’t very good at communicating my feelings,” Tyrrell continues. “I kind of hid everything away but after going through a spell of counselling at Pieta House, I realised the more I began to open up and talk and reach out, the better I began to feel and the more confident I became in myself. It made me really believe that recovery was possible and there are people out there willing to help. That’s what I see my role as now – to ensure those who are struggling know there is help out there.” 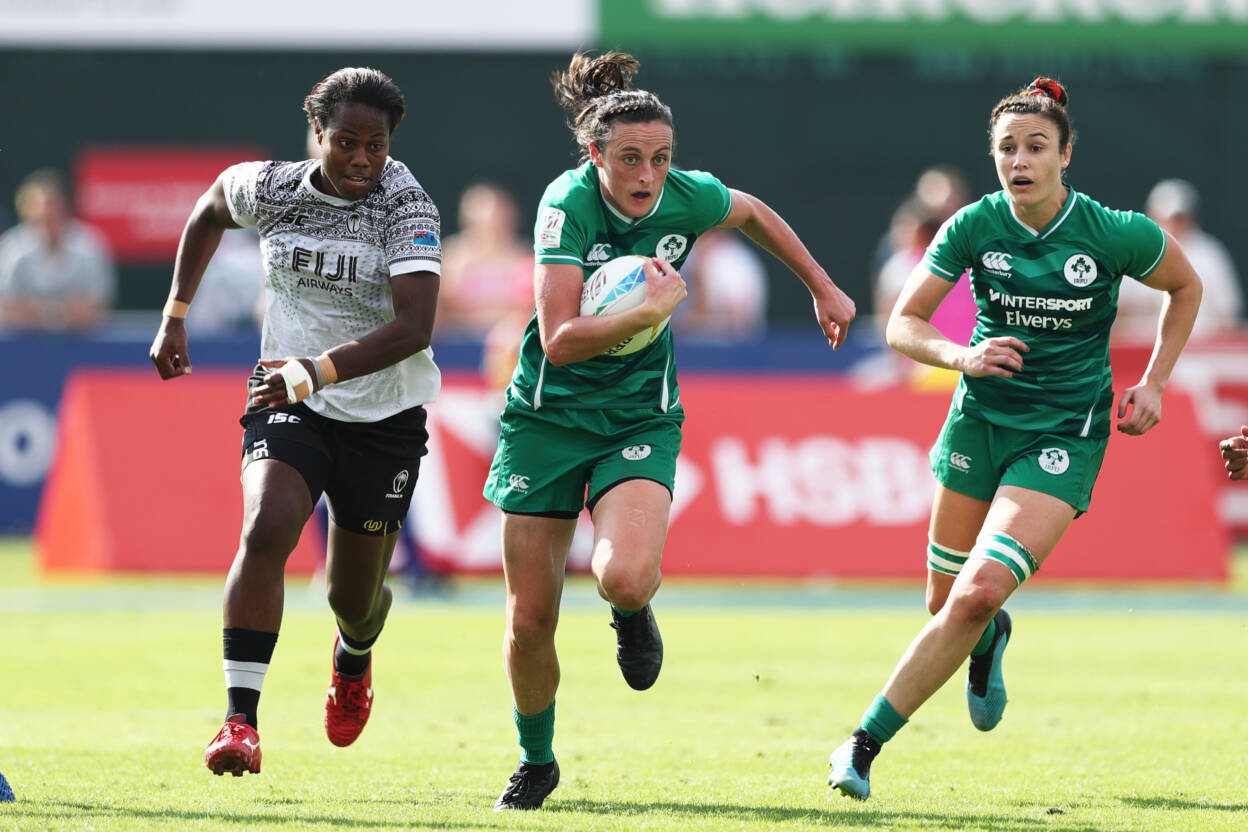 Tyrrell is not alone on this crusade and her Ireland team-mates have always shown steadfast support throughout, but the relationship works both ways. As a squad who spend weeks on end on the road together, training, playing and living in each other’s company, the players have developed strong connections, both on and off the pitch. For all the highs, there are just as many lows. For all the good days, there are just as many bad days.

“I think that’s the benefit of being in a team sport,” Tyrrell says. “You know you can tell your team-mates anything and they’ll be there for you no matter what. Yes, we’re competitive on the pitch and we all want to win so tensions may bubble over at times, but at the end of the day we’re all best friends and always looking out for each other. We’ll pick each other up no matter what.

“At the Olympic Qualifiers last summer, the result didn’t go our way and we didn’t qualify. I was devastated and felt really low but I wouldn’t want anyone else around me at that time because all the girls know what that feels like. We were all going through the same thing and nobody needed to say anything, we just had to be in the same company as each other. That’s the power of a strong support network.

“In sport, or in any walk of life, you need those sort of friendships. The more time we spend together as team-mates and as people, the closer we get. You get to know people pretty well and what they may need at different times and I’m so grateful to have such a good group around me because we all know we’re there for each other when needed.”

Being away from that support network over the last two months has been a challenge for Tyrrell, but the players have maintained regular contact through Zoom calls, themed workouts and Yoga and mobility sessions during the week. And while the natural instinct is to maintain a flawless and positive public facade on social media during these uncertain times, Tyrrell recognises the importance of also showing that level of vulnerability.

“It’s such a big thing to show we’re just normal people like everybody else,” she adds. “We have good days, we have bad days, we have highs and lows. There are days we’re feeling in great shape and the next day we’re not. We’re humans and no one is exempt from life’s realities. We all have flaws and social media might only promote the positive side of things but we have down days and days when we’re not feeling ourselves. That’s why I posted that picture during the week. It’s absolutely okay not to be okay and it’s so important to be kind to yourself.

“I find Yoga in the mornings allows me to get into a good head space for the day ahead as there is so much uncertainty around right now. I take that half an hour to think positively, focus my mind and not let anything overwhelm me. Take it step by step, do as much as you can to mind yourself – both mentally and physically – and remember that things will get better. There are always brighter days ahead.”