In the shadow of the Aviva Stadium’s distinctive glass facade on Lansdowne Road, Amee-Leigh Murphy Crowe and Katie Fitzhenry set up their own home gym each morning, using the collection of equipment they have while improvising with anything else they can find around the house that might be of use. Their back garden has been transformed into a makeshift training area in recent weeks, the small patch of grass a blessing in the current situation.

In the absence of any semblance of normality, Murphy Crowe and Fitzhenry count themselves fortunate to have each other. For motivation, for support, for that camaraderie so many players will be missing as they train remotely. The should have been travelling home from the seventh leg of the HSBC Women’s World Rugby Sevens Series in Langford this week, instead the season has been decimated and their days now devoid of the very structure and routine professional athletes crave.

The indefinite suspension of the season, and uncertainty around the immediate future, presents many challenges in different guises for players, this period of inactivity triggering a range of emotions, not least a lack of purpose at a time when the schedule would ordinarily be at its busiest. Hong Kong, Langford, Paris and this summer’s Rugby Europe campaign all postponed, it’s now 95 days since the Ireland Women’s Sevens last played.

Through it all, the players continue to be well supported by the IRFU’s Medical, Nutrition and Athletic Performance departments, ensuring they remain on track physically through tailored strength and conditioning programmes, while the use of technology and, in particular Zoom video calls, have helped coaches and management stay in close contact with the squad as they stay apart. But all without the stimulus of group training and the  substance of matches.

Last week, captain Lucy Mulhall spoke to her team-mates as a group about the importance of having a focus at this time, whether it’s using it as an opportunity to make incremental gains across metrics such as strength, speed or fitness, or seizing the chance to hone and sharpen skills for when rugby does return. To make the best of a bad situation.

It comes as no surprise to hear Murphy Crowe – an inherently positive and driven individual – is doing just that, making the most of the hours at home and adopting and improvising to ensure she comes out the other side a better player and in prime condition so she’s ready when the time comes to pull on the green jersey again.

Having been a virtual ever-present for Ireland since her World Series debut six years ago, this has been the longest period of downtime Murphy Crowe has experienced since leaving secondary school and while there are ‘challenging days’ when motivation levels are low, the 26-year-old’s mindset is remarkable. Focused and positive, with an unquenchable work-ethic and appetite for success.

“For me, the goals are clear. I’m working to get faster, fitter and stronger through this period,” Murphy Crowe tells IrishRugby.ie. “I’ve worked hard with Allan [Temple-Jones, Sevens Head of Athletic Performance] and Ed [Slattery, Sevens Athletic Performance Coach] on my strength over the last couple of years and now is the chance to build on that. 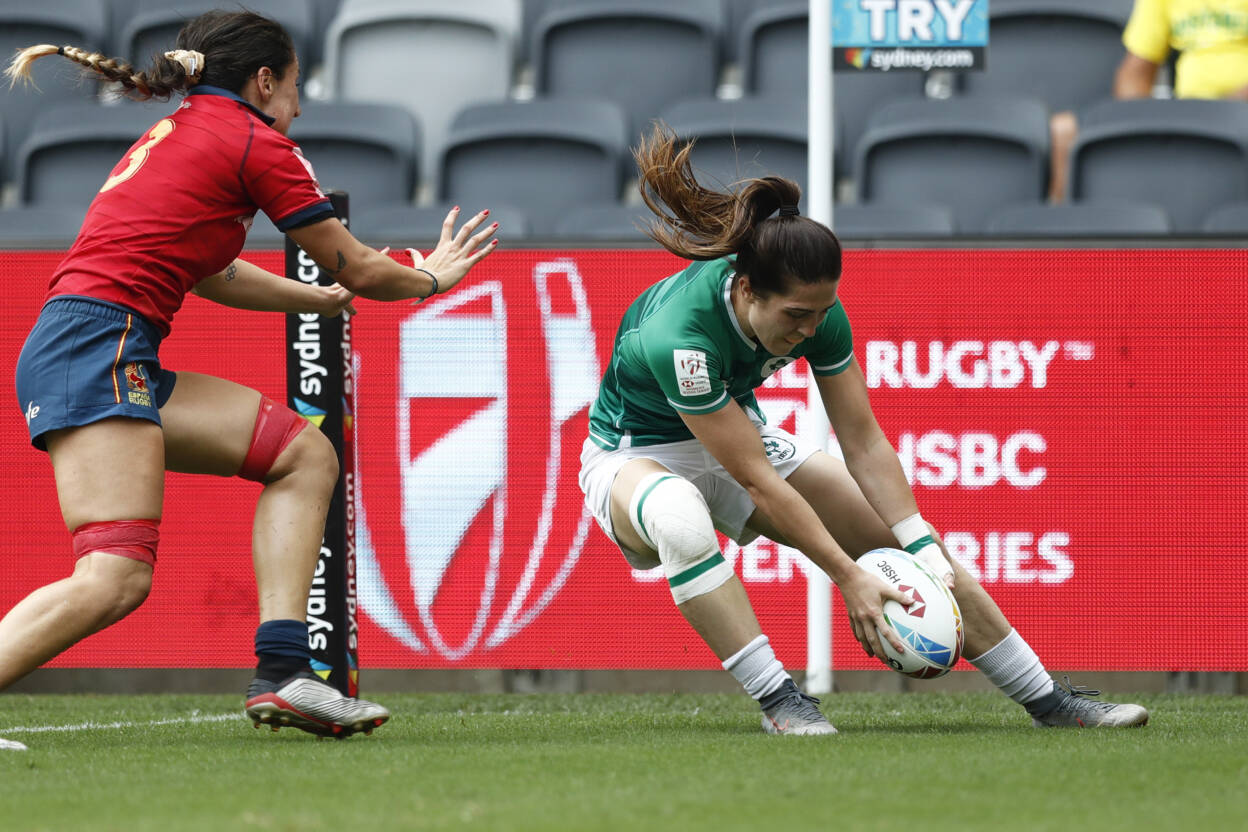 “I’ve tried to work hard on that over the last few weeks but I haven’t lost sight of my other goals of getting fitter and faster. Having that clear focus helps motivate me because I want to be the best version of myself for that day we’re back training and getting ready for a tournament. I want to be in the best possible shape for our return and, actually, you can learn so much about yourself during these difficult times and use it to add something special to your locker.”

Even after a superlative season in 2019, during which Murphy Crowe finished as the top try-scorer on the World Series and earned a place on the coveted Dream Team, there was never any danger of the Tipperary native resting on her laurels. It was, in many ways, an extraordinary year for Murphy Crowe as she scaled rarefied heights, scoring 35 tries across the World Series campaign, to help Ireland Women record a best overall finish of eighth.

One of the most devastating and prolific finishers on the circuit, Murphy Crowe has scored 98 tries in her 131 World Series matches for Ireland, and is now just two scores away from becoming the first Ireland Sevens player – Men’s or Women’s – to reach the significant landmark of a century of tries. For context, only eight Women’s players have achieved that feat before.

“I’m not really one for statistics,” she laughs, in typically self-effacing fashion.

You see the thing about Murphy Crowe is that she remains true to her roots and has enjoyed huge success on the international stage without losing any of her core values. Humility, hard work, a fearless competitor, an unflinching sense of purpose. And to talk solely about her try-scoring statistics – as impressive as they are – would be a disservice to the overall contribution the winger makes both on the pitch and in the dressing room.

Murphy Crowe’s unassuming disposition and natural leadership qualities make her a popular figure within the programme and even when the spotlight is shining brightly, she never fails to acknowledge the role of her team-mates and coaches and the support and guidance she has received along the way from her family.

“I always say those awards are for the team and I really hope they take as much pride and credit in them as I do,” Murphy Crowe continues.

“I suppose this bit of downtime has allowed me to reflect on last year a bit more and the role everyone within my support network has played over the last six years. I don’t just think of current coaches and team-mates but everyone who has helped me or given me any bit of advice along my path. At the end of the day, I would not be where I am now without them.”

Even now, six years on from her World Series debut in Guangzhou, Murphy Crowe remains as hungry and motivated as ever. Perhaps it was a background in athletics and the traits demanded by, and fostered in, individual events such as sprinting or the long-jump that helped develop such characteristics, but Murphy Crowe’s commitment and quest for betterment every single day is exceptional.

“I want to improve myself in everything I do,” she explains. “I started athletics as a young kid and I think coming from an individual sport you have to motivate yourself and I was able to grow traits and habits through that. I probably enjoy the bad days as much as I enjoy the good days because, you know what, you learn the most from them.”

As well as athletics, Murphy Crowe played basketball and camogie through secondary school. Her speed was always a standout attribute and when she was encouraged to give rugby a try in her early teens, a love affair with the sport was about to blossom, firstly at Clanwilliam Rugby Club and then through the underage system with Munster. 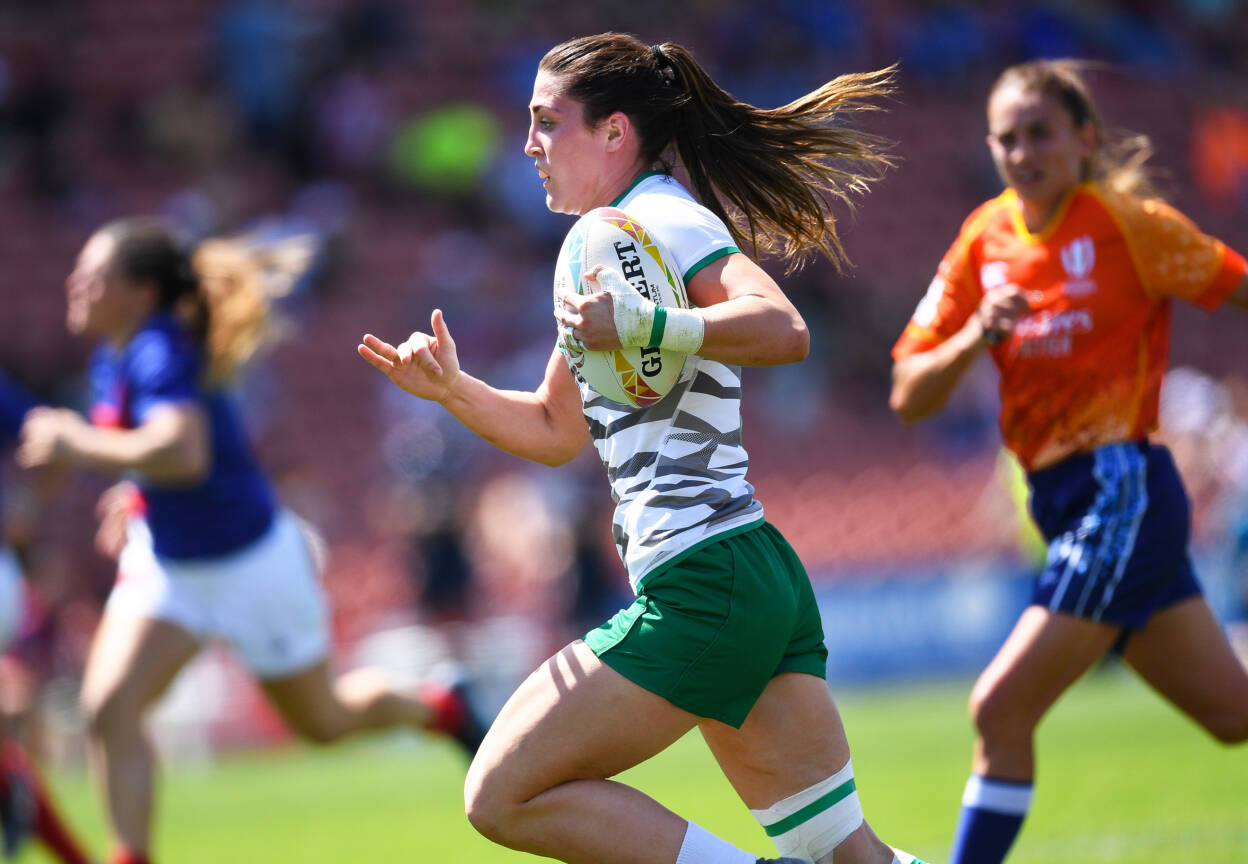 Murphy Crowe made her senior debut for the southern province in the 2013 Inter-Provincial series at the age of 18 and her talent and potential was quickly identified on a national level when she was invited into the Ireland Sevens programme, initially at underage level and then into the senior Women’s squad.

“One memory that sticks out for me is going to Sheffield for a tournament with Stan McDowell as coach,” she recalls. “It was the Ireland Under-19 Provincial squad at the time and a couple of days later a few of us got a call to ask us to train with the senior squad. The following year the programme became centralised in Dublin and I got my cap in China, which was obviously a big moment.

“But a huge factor in our success and my development as a player was the arrival of Anthony [Eddy, IRFU Director of Women’s and Sevens Rugby]. We had lost our place on the World Series the previous year and he came in and really motivated us to get back on the Series. But not just that. He motivated us to get better, to want to be a world class team and to want to be able to perform against the top teams. I think that was the big moment for me anyway. The belief changed and as a young player I just thought this team can go places.”

Murphy Crowe has been there every step of the way since, at the heart of all the good days but, just as importantly, an integral part of the programme’s evolution and growth through the harder times and disappointing setbacks. She has often lead the way, her performances on the pitch and actions off it a true example for the younger generations coming up through the IRFU’s Women’s Development Pathway system.

But there’s still much more to come. From generating headlines at both home and abroad, and becoming a genuine star on the World Series, Murphy Crowe has never lost sight of her goals and the motivation that drives her to be the best version of herself every day.

“It has always been an ambition of mine to become an Olympian,” she says.

“It probably comes from athletics but we’ve always been striving for that in the Sevens programme and it’s still the pinnacle of what I want to do with this team. We’ve got some really good young players coming up now and it’s exciting. A big part of my motivation would be to help them develop and see them make a big difference for us on the big stage.

“As much as I’m going to grow old, I want to give the next Olympics my best shot as I have huge belief in this programme. I’d give my life for it, to be honest, because I love the programme, the people and the experiences. I’ve been in it for six years, all of my adult life, and at the moment it’s not something I could ever think about leaving or giving up.

“I don’t like thinking about my life without playing Sevens for Ireland and representing myself and my parents in the green jersey. That’s a really proud thing for me and it’s something I want to keep doing to the best of my ability. For now, I’ll just my head down and look forward to the day we get to do what we love again.”

You’d expect nothing less. Always striving to be better, always reaching for the top.