Jacob Stockdale runs in his second try against Wales at the Aviva Stadium in 2018. ©INPHO/Tommy Dickson

With the clock in the red, the Test match in the balance and Wales working their way through eight phases of possession, the Aviva Stadium was on the edge of its seat. Just three points separated the sides at the end of a thrilling, rip-roaring Six Nations showdown. Ireland had been dominant, exhibiting their Championship credentials in front of a vociferous home crowd, before Wales threatened an almighty heist at the death.

Trailing 30-27, Warren Gatland‘s side mounted one final assault off a line-out on halfway, the tension in the stands palpable. The Grand Slam was on the line. Ireland scrambled frantically in defence, Bundee Aki making a crucial tackle in midfield, CJ Stander and Jack Conan both thwarted in desperate attempts to make match-winning turnovers. Wales moved it right and then left, and back again. Probing, patiently waiting for the green wall to fragment.

Even two years on, and with the safety net of knowing how those last few seconds played out, the heart skips a beat when Gareth Davies, the Wales scrum-half, pulls it back through the hands of Scott Williams and Elliot Dee for Gareth Anscombe. As Ireland’s defence rushes up, the try is assuredly on out wide. But, in that split second and as the last defender, Jacob Stockdale comes from deep to read Anscombe’s long skip pass.

“It’s a great sign of someone’s personality and character,” Rob Kearney said during Friday’s Six Nations rewind of that 2018 epic in Dublin, in aid of ISPCC Childline, as he watched those nail-biting last passages alongside Rory Best and Dave McIntyre.

Having scored a similar try against Italy a week previous, Stockdale, in his first Six Nations, was developing a penchant for intercepts. Seven points. Game over. Relief.

“Jacob worked very hard in training to make sure he could take those moments, and that’s a skill in itself,” Best, the Ireland captain on the day but watching from the bench as Stockdale ran it home under the posts, added. “At that moment, it was just pure relief.”

Stockdale managed to squeeze a career’s worth of big moments into one indelible Championship campaign. He scored a brace of tries in the consecutive home games against Italy, Wales and Scotland, and then produced that try in Twickenham as Schmidt’s side secured Grand Slam glory in stunning fashion. But there was arguably none more important than his intervention at the death against Wales. It was, in many ways, a Championship-defining moment. And the celebrations under the posts, and in the stands at the Aviva, spoke volumes of its significance.

“The one thing that sticks out in my memory about that game was how much the try meant to the lads as a team,” Stockdale tells IrishRugby.ie. 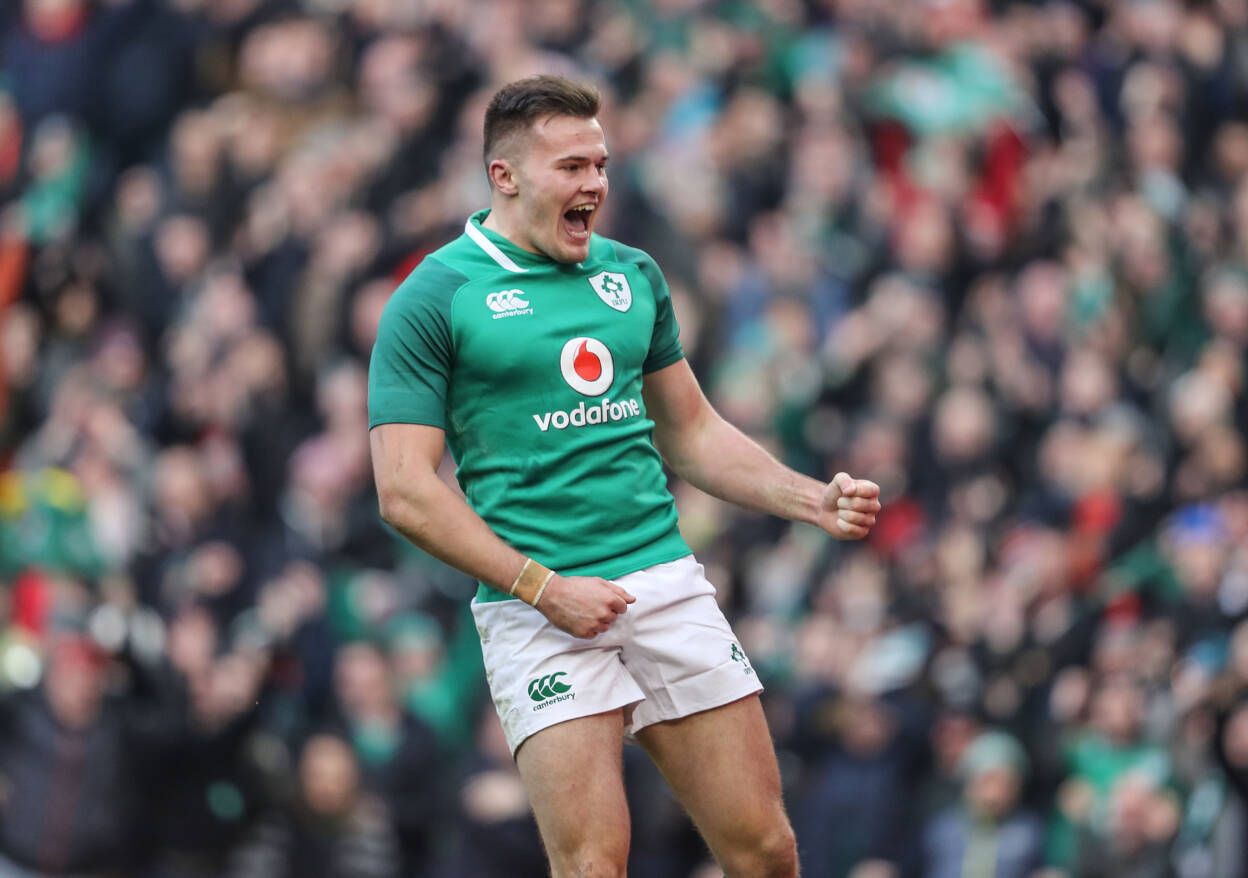 “Wales were really starting to come at us and were putting us under increasing pressure. I just remember making that split-second read and suddenly I had the ball in my hands. Getting to score an intercept try like that to finish the game off was pretty cool.”

Stockdale had earlier scored in the near corner to set Ireland on their way that February afternoon, the Ulster winger finishing smartly after a superb pass left from Johnny Sexton to continue his prolific try-scoring record at the start of his international career.

“They were two very different tries,” he remembers. “The first try was really created by Johnny, it was just an incredible pass from him. I remember at the time hoping he would throw the pass as I knew I was in space off the scrum and could get in but wasn’t sure if he was going to. But, in fairness, he just ripped an absolute screamer of a pass across to me and I managed to get into the corner which was pretty good.

“And then intercept tries are always different I suppose. They’re pretty nice as you get to run them in and usually get to enjoy the moment a wee bit more as you’re running in. That one against Wales I actually remember thinking there was a Welsh player right on my heels so you’ll see watching it back, I absolutely gassed it to the line as quickly as I could even though nobody had really bothered to chase me. I probably could have enjoyed it that bit more.”

Even still, Stockdale allowed himself a smile for the cameras as he sealed a 37-27 victory for Ireland, before being engulfed by his team-mates.

“It’s one of my favourite tries because of how much it meant to the lads. Test matches are tough and whenever you’re trying to defend a lead against a team that are attacking really well, the relief you have when you realise you don’t have to defend anymore and you’ve just scored a try to win the game is really nice. It felt really good making my team-mates around me happy.”

Stockdale would continue to make his team-mates and indeed Ireland fans very happy throughout the Championship, eventually finishing it with seven tries to his name and earning the Player of the Tournament award for his exploits.

“After we won the Grand Slam, the couple of days afterwards, boys who had been through a lot of Six Nations tournaments kind of said to me this doesn’t happy very often, make sure you enjoy it,” the 24-year-old continues. “I did enjoy it but I don’t think I realised the full extent of how rare winning a Grand Slam at your first go is. I feel incredibly lucky to have been able to do it and now for the next 10 years or however long I’ll be playing the game for, I’ll just be trying to help the team chase that again and recreate it.”

Aside from his try against Wales, Stockdale recalls a passage of play early in the victory over England as one of his standout moments from the 2018 Six Nations.

He explains: “We spoke about being physical and winning the physical battle in the week of that England game. We knew what was at stake for us but also knew how determined England would be to deny us. So a lot of our focus was on that physical battle and I remember inside the first two minutes and Dylan Hartley carried the ball. I think it was Dan Leavy or James Ryan, one of the two anyway, absolutely smashed him and sent him backwards. 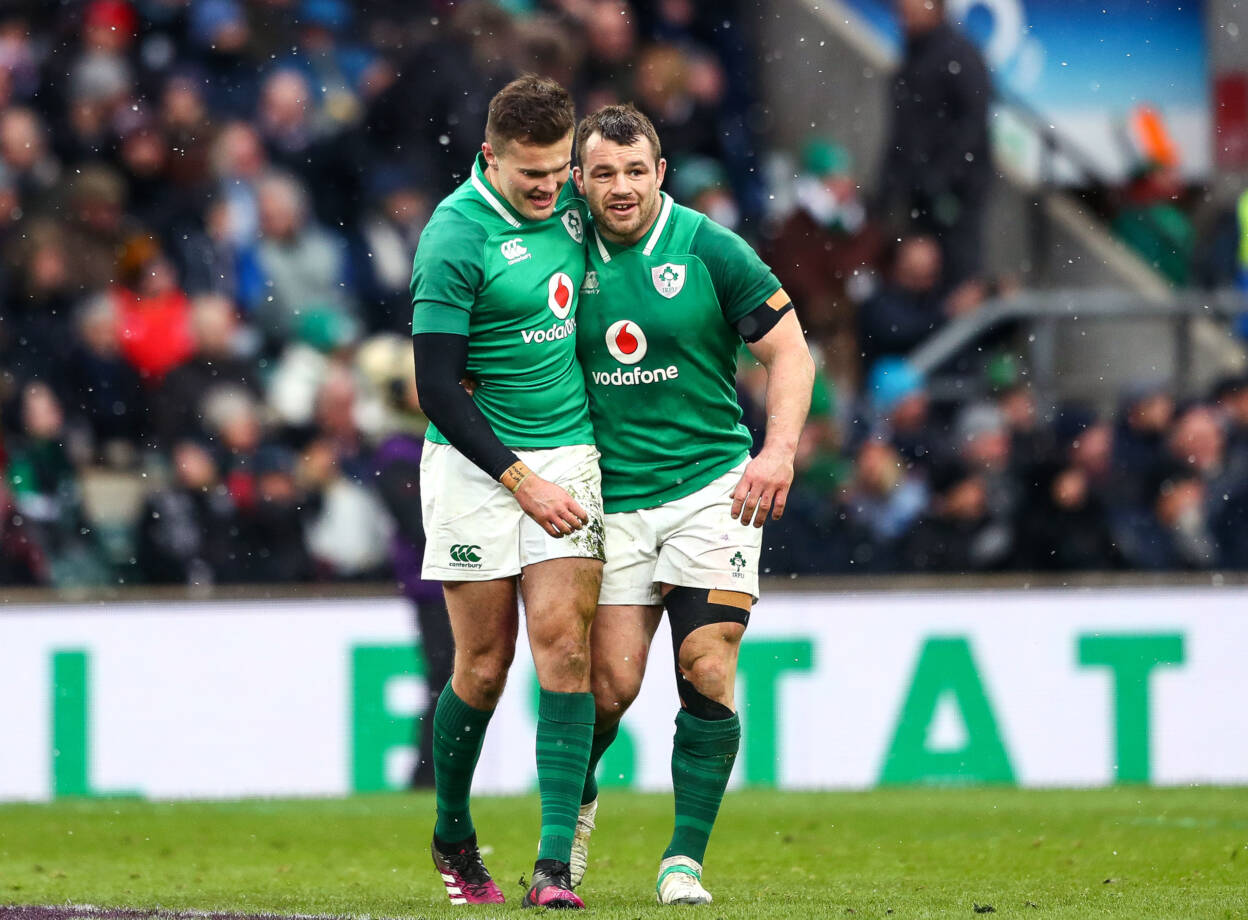 “And after that hit, I just remember having this feeling. We were not losing that game. Looking back, that’s a real standout memory for me, just watching it and thinking ‘Holy crap, we’re on it here.’”

Two years on, the passage of time has allowed Stockdale genuinely appreciate the enormity of the achievement, while also fueling his desire to reach those rarefied heights again in the future.

“I really hope we create more moments like that as a team in the years ahead,” he adds. “They’re the special moments that stick with you and I’m very grateful to have one Grand Slam under my belt and it’s something that nobody will be able to take away from me.”

You can watch the Six Nations Rewind of Ireland’s 2018 win over Wales with Rory Best and Rob Kearney in full below, and all we’re asking is that you make a donation if you can to ISPPC Childline, as nominated by our team sponsor Vodafone Ireland.

You can donate online here or via text through the details below.