This Round 11 game of the Energia AIL Div1b in late January 2020 pitted the two frontrunners for promotion against one another.  Both sides had started the season with seven wins on the trot but each had lost two of the last three games.  The meeting of the two at Woodleigh Park could determine the automatic promotion place.

Highfield were unbeaten at home to this point but the two loses in the past three league outings had stalled their ability to cement top spot.  Losses away to Old Wesley in December and away to Shannon in mid January meant they needed this victory to create some breathing space between themselves and Old Wesley. 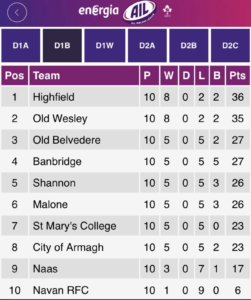 Wesley were also smarting following two losses to Malone either side of the Christmas break and having beaten Highfield at Energia Park in early December they would have fancied their chances of picking up their fifth away win of the campaign.

With just a solitary point between them on the league table who would take control of their own destiny at this pivotal stage of the season.    Wesley took a slender one point lead into the break leading 13-12 but a strong second half performance from the home team would see them establish a six point buffer on the league table. 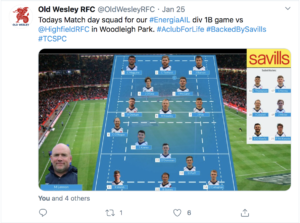