By Ryan Bailey at BC Place, Vancouver

Backed by a vocal green contingent inside BC Place Stadium, Ireland exchanged blows with the All Blacks Sevens throughout a high-scoring contest under the Saturday night lights but New Zealand found another gear to finish strongly and run in two late tries for a 33-24 victory.

The defeat, coupled with a disappointing last-minute loss to Spain earlier in the day, meant Ireland finished third in Pool C after the opening day of the sixth World Series leg in Canada, with Eddy’s side dropping into a ninth place Play-off quarter-final against France on Sunday morning (10.05am local time/5.05pm Irish time).

A performance brimming with intent and physicality against the All Blacks may not have yielded the result Ireland required to advance to a second consecutive quarter-final after reaching the last eight in Los Angeles last week, but it was further evidence that Eddy’s side can more than compete with the leading sides on the World Series.

Just as they did during last weekend’s draw with South Africa, Ireland were clinical with possession and another Jack Kelly double, Liam Turner‘s maiden World Series score and Jordan Conroy‘s second-half try put Eddy’s charges 24-21 in front heading into the final exchanges.

But the All Blacks responded emphatically and having worked ferociously hard to put themselves in a winning position, Ireland were unable to hold out in the closing minutes as Vilimoni Koroi and Amanaki Nicole both went over to seal top spot in Pool C for Clark Laidlaw‘s outfit.

It was a disappointing end to the day for Ireland who had set out with their sights firmly on a quarter-final berth but consistency remains a primary work-on and a slow start against Spain in the campaign opener ultimately cost them dearly here, particularly after they had rebounded strongly to beat Kenya 14-12 in their second Pool outing. 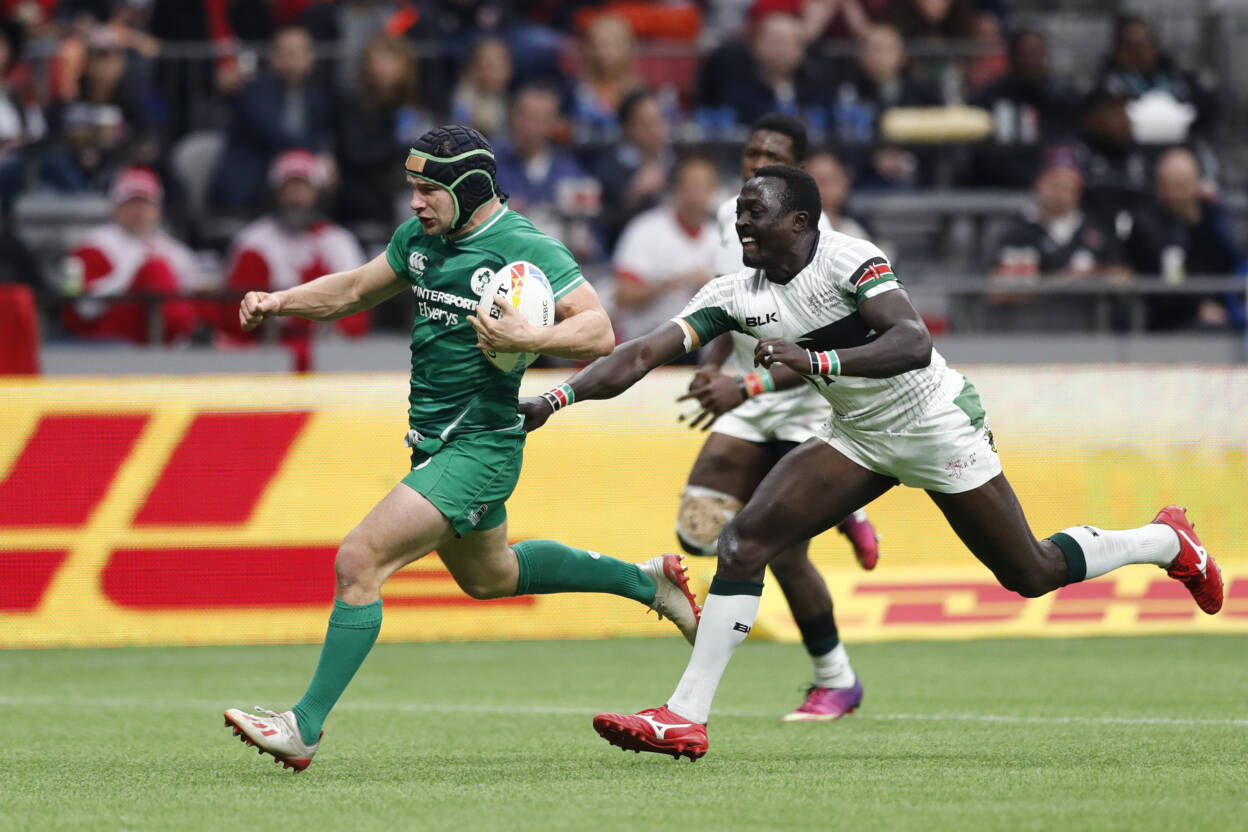 A succession of damaging missed tackles gifted their European rivals scoring opportunities and they were duly taken, with Manuel Sainz-Trapaga going over after the final hooter to seal a 28-26 win for Spain, who now face host nation Canada in Sunday’s quarter-final.

Eddy’s men were much better against a powerful Kenya outfit who had beaten Ireland comfortably in LA last time out as Mark Roche and Graham Curtis crossed in the first period in a hard-fought 14-12 victory, setting up that shootout against New Zealand in Saturday’s super session.

Despite conceding early to Akuila Rokolisoa, Ireland remained composed and with the fit-again Foster Horan to the fore, registered first-half tries through former Ireland Under-20 Grand Slam winner Turner and Kelly, who had another big impact in the green jersey.

The game threatened to get away from Ireland as firstly Caleb Clarke and Rokolisoa’s second put the All Blacks firmly in the driving seat, but back came Ireland through Conroy, who now has 26 World Series tries for the season after scoring two against Spain earlier.

When Kelly broke through for his second of the night shortly after, Ireland held a three-point lead deep into the second half and the thousands of Irish fans in the BC Place Stadium found their voice only for the All Blacks to come roaring back to set up their own quarter-final showdown with Fiji.

Ireland, meanwhile, must refocus on their Play-off tie against France as they look to finish this March double-header off strongly and continue to build important momentum heading towards London and Paris in May and then the Olympic Repechage tournament in June.

Sunday’s action from the Canada Sevens is live on Sky Sports and you can follow Ireland’s progress on IrishRugby.ie and on the IRFU social media platforms.