Following all the hours of training behind the scene, scrum half Kathryn Dane was really happy to see the Ireland Women’s team coming out on the right side of the result in last Sunday’s Six Nations clash with Scotland.

Citing last November’s last-gasp defeat to Wales as a motivating factor, the Enniskillen native played her part in making it a successful opening to 2020 for Adam Griggs’ charges.

“We’ve worked so hard since the last Six Nations and even working through the autumn series there. Having that loss against Wales really gave us the kick up the ass to work hard over Christmas,” admitted Dane, speaking in the aftermath of the 18-14 win over the Scots.

“We’re delighted that this win against Scotland sets the tone now for the rest of the campaign. We’re just going to keep going into Wales now and build the momentum.”

While they were made to sweat by Philip Doyle’s side during the second half, Ireland had initially created an impressive early platform at Energia Park. Thanks to tries from Cliodhna Moloney and Sene Naoupu, they surged into a 13-0 lead within the first 15 minutes.

The free-flowing, expansive style on display in this period was, by and large, the culmination of the squad’s principles being put into practice. The target now is for Dane and her team-mates to deliver it on a more consistent basis.

“We’ve been really focusing on unstructured rugby in our training sessions and we were just told to go out there and express ourselves. We did play with such flair in the first 15 minutes. Delighted about that, but hopefully next week we can turn that 15 minutes into 60 minutes, 70 minutes and really put teams under pressure.”

Before departing with a calf injury during the final quarter, Gloucester-Hartpury’s Ellen Murphy had been forming an effective half-back partnership with Dane. Given they were previously team-mates at club level, it came as little surprise to see them developing a strong understanding.

“We both play the same sort of game. Very fast, quick rucks. We talk about gold ruck ball. That’s what we want to see all day long. She’s a great kicker as well, so it helps to have that for exits as well.

“We played together at Old Belvedere back in the day. We were both between 9 and 10 at that stage, so we know a lot about each other and we’re very familiar with each other’s game style.” 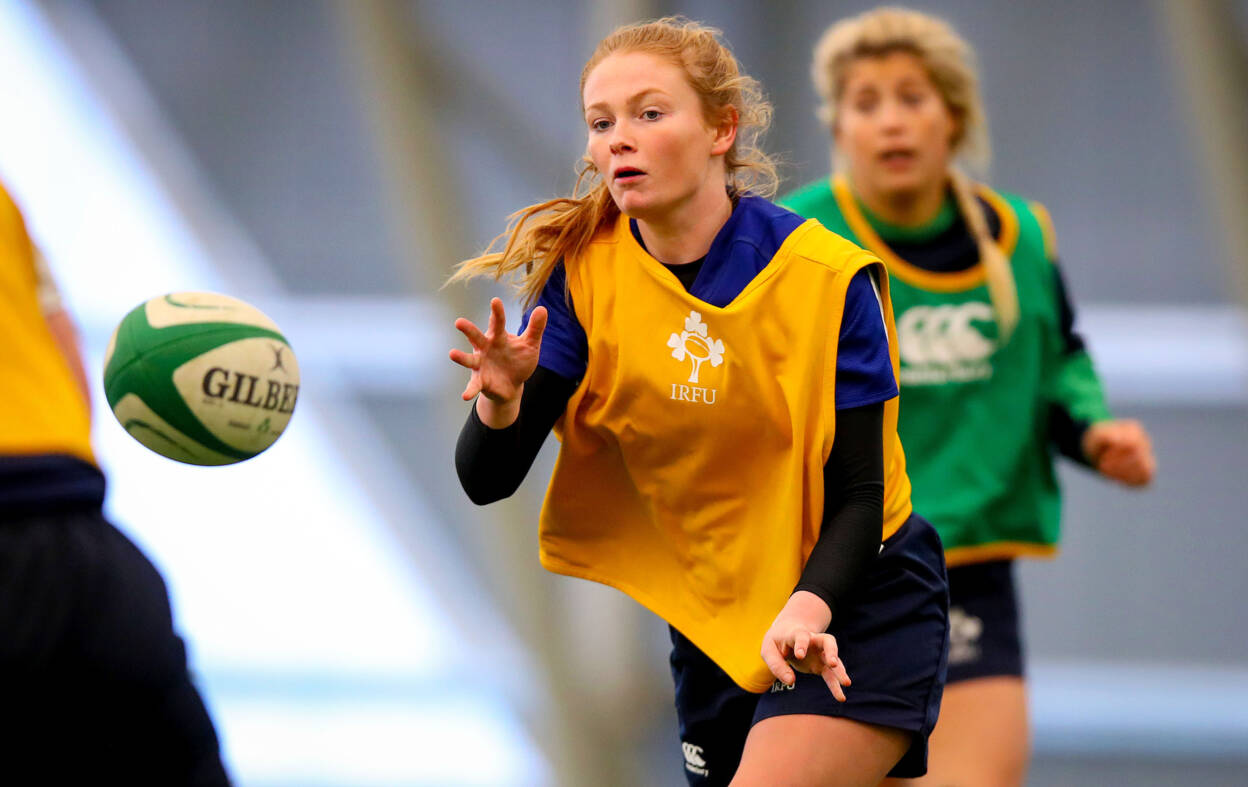 Since making her debut against England in the opening round of the 2019 Championship, Dane has been ever-present in Ireland’s matchday squads. Dating back to last February’s defeat to Italy in Parma, she was making her fourth consecutive Six Nations start on Sunday.

At just 23 years of age, Dane is only getting started in the 15s international arena. With the emergence of teenagers like Beibhinn Parsons and Dorothy Wall to compliment established figures like Lindsay Peat and Sene Naoupu, there is a strong blend within the current set-up.

“A real mixture of experience and just pure physicality and speed. Beibhinn brings such speed and energy into the pitch. Sene as well. The likes of Lindsay and Doro (Dorothy Wall), they’ve serious physicality and weight in their tackles. It’s a pleasure to play with (them) and really nice to have those crash balls. It lets us then play that wide, expansive game that we want.”

The Irish performance was never going to be perfect on the first day out, and having built up that early cushion, Scotland did threaten to spoil the party. Dane admitted that some of their biggest issues in the game were self-inflicted, but was proud of the composure shown when they were put under the cosh.

“It didn’t help that we gave away some cheap penalties to let them back into the game. That put us on the back-foot, I suppose. They took their chances well and pinned us back into our red zone, but we dealt with it well. Our scrambled defence has really been worked on since the last Six Nations. We’re pleased that it came off.”

In terms of developing her game as a number nine, Dane could not have asked for a more suitable head coach than Griggs. The New Zealander is a past exponent of the pivotal half-back position, featuring on the Lansdowne side that won an All-Ireland League title in 2014/15.

He also enjoyed a brief spell in the Leinster ‘A’ team – alongside current senior internationals like Dave Kearney, Jack McGrath, Rhys Ruddock and Jordi Murphy. Dane feels that Griggs had added an extra dimension to her play and does not believe she is alone in this regard.

“Absolutely. He’s definitely helped me massively in my own game as a nine. It also helps in terms of the whole back-line itself, to play that more expansive game. Work on the exits and of course, that bit of style and flair in our play as well that we’re trying to introduce,” she added.