At the end of a tough Guinness Six Nations battle with Scotland at the Aviva Stadium, Andy Farrell cut a satisfied figure as he reflected on his first win as Ireland head coach.

It has been a long wait for the Wigan man to get to this point – it was first announced in November 2018 that he would take over the role from Joe Schmidt following the Rugby World Cup in Japan.

It was far from pretty at times against a tenacious Scotland side, but former defence coach Farrell felt some admirable traits were on display during the closing moments of an intense first round clash.

“I was delighted to get the win,” he said at the post-match press conference. “I thought we thoroughly deserved the win, although I thought Scotland were great. It was a good Test match. It was a tough old Test match, first up. It was very attritional.

“I thought the Scottish forwards were excellent and defensively they were hitting hard. We know what a threat they can be with ball in hand. We had to fight and dig deep plenty of times, certainly in the first half.

“I think our performance, you can sum it up in the last five minutes really. We asked the lads all week to make sure they stand for something and I think you could easily see the true grit. Especially from some of those tight five boys.

“We had to dig deep. We had a couple of injuries nice and early, that makes it a little bit tricky as far as your subs are concerned. Some of them were out there a lot longer than they probably have done in the past, but they were leading the way in those last five minutes. I thought it was outstanding.”

Nonetheless, Farrell readily admitted it was a far from perfect performance. Despite eking out a 19-12 victory, there are areas to work on ahead of Wales’ visit to Dublin next Saturday (kick-off 2.15pm).

“I thought we got too carried away at times. I thought some of the decision-making was good. Some of it was a bit wayward. Those type of things are going to be a work in progress but, again, we asked the boys to stand for something and it was true Irish grit out there.

“The rest of it we’ll keep building on. I thought we didn’t have much field position but when we got into the 22, I thought we looked quite dynamic and we were flowing a little bit better.”

Following a powerful display over the 80 minutes, CJ Stander was a popular choice as the man-of-the-match in this Six Nations opener. Having started the game at blindside flanker, he switched to number 8 as a result of the head injury picked up by debutant Caelan Doris. 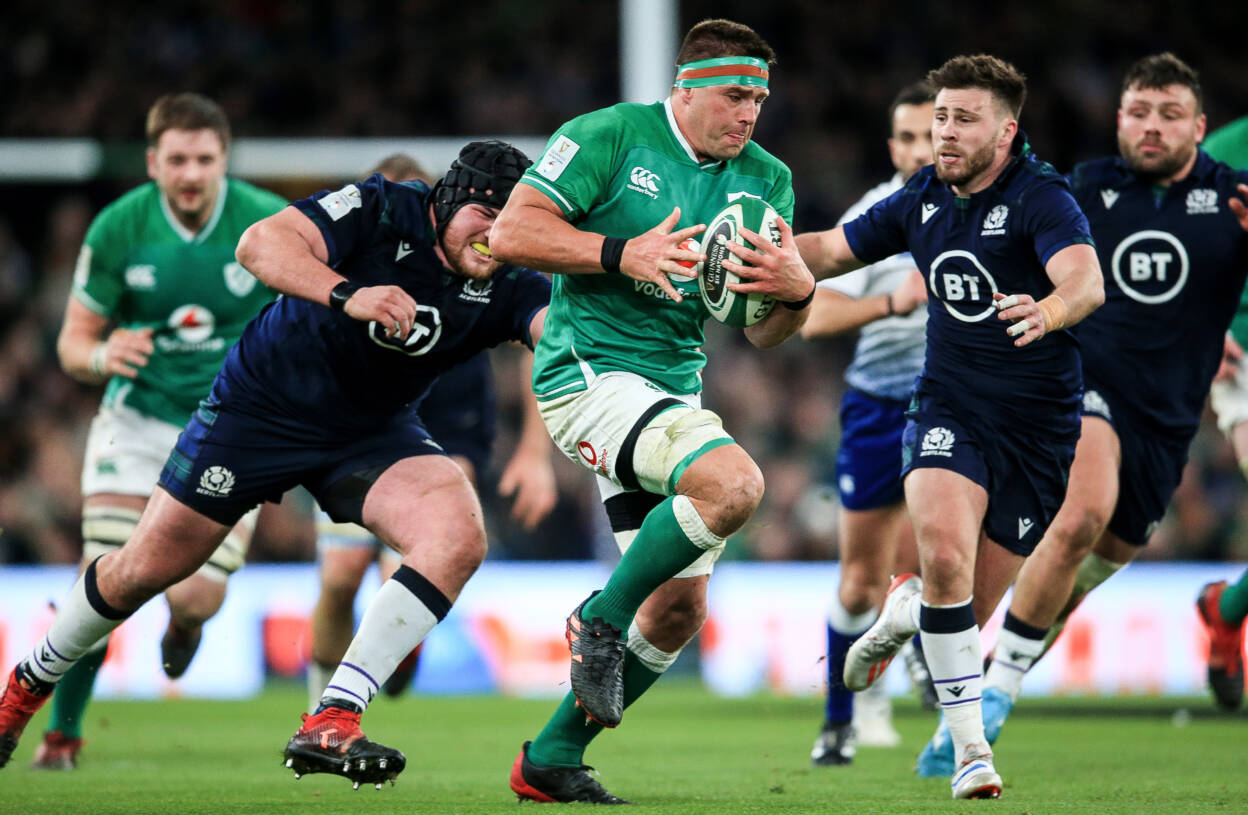 At the same time as he acknowledged the high quality of Stander’s play on the day, Farrell gave the seal of approval to several other forwards, noting: “I thought he was great. I think CJ’s performance just epitomised what the whole pack was doing for one another. I thought Josh van der Flier made great yards in attack as well.

“When you see Tadhg Furlong with his head up and struggling to get over the gain-line, and then suddenly he’s got three players on his back. I think you can see the fight that’s throughout the pack. Iain Henderson worked himself to the bone. I thought Rob Herring was really, really good. I thought the pack were terrific.”

Although it was a landmark day for Farrell in his rugby career, he was not alone in this regard. Out-half Jonathan Sexton led out the team for the first time as Ireland’s newly-appointed captain, taking over from his retired predecessor Rory Best.

Sexton was skipper for the Rugby World Cup pool triumph over Russia in Japan, but this was his first time to do so at the Aviva Stadium. For Farrell, the fact that the Dubliner produced such a strong performance – he contributed all 19 of Ireland’s points – after a recent knee injury-enforced absence is testament to his overall character.

“Johnny hadn’t done any team training whatsoever, any rugby training whatsoever until we touched down in Portugal. For him not to touch a ball and not to fight in anger until Thursday of this week, that says it all about the man.

“To have the pressure of doing something (captaining Ireland) that he has passionately wanted to do and all the new bits that come around that. And then deal with coming back from such an injury and leading the side like that. Hat’s off to Johnny, that’s a magnificent effort.” 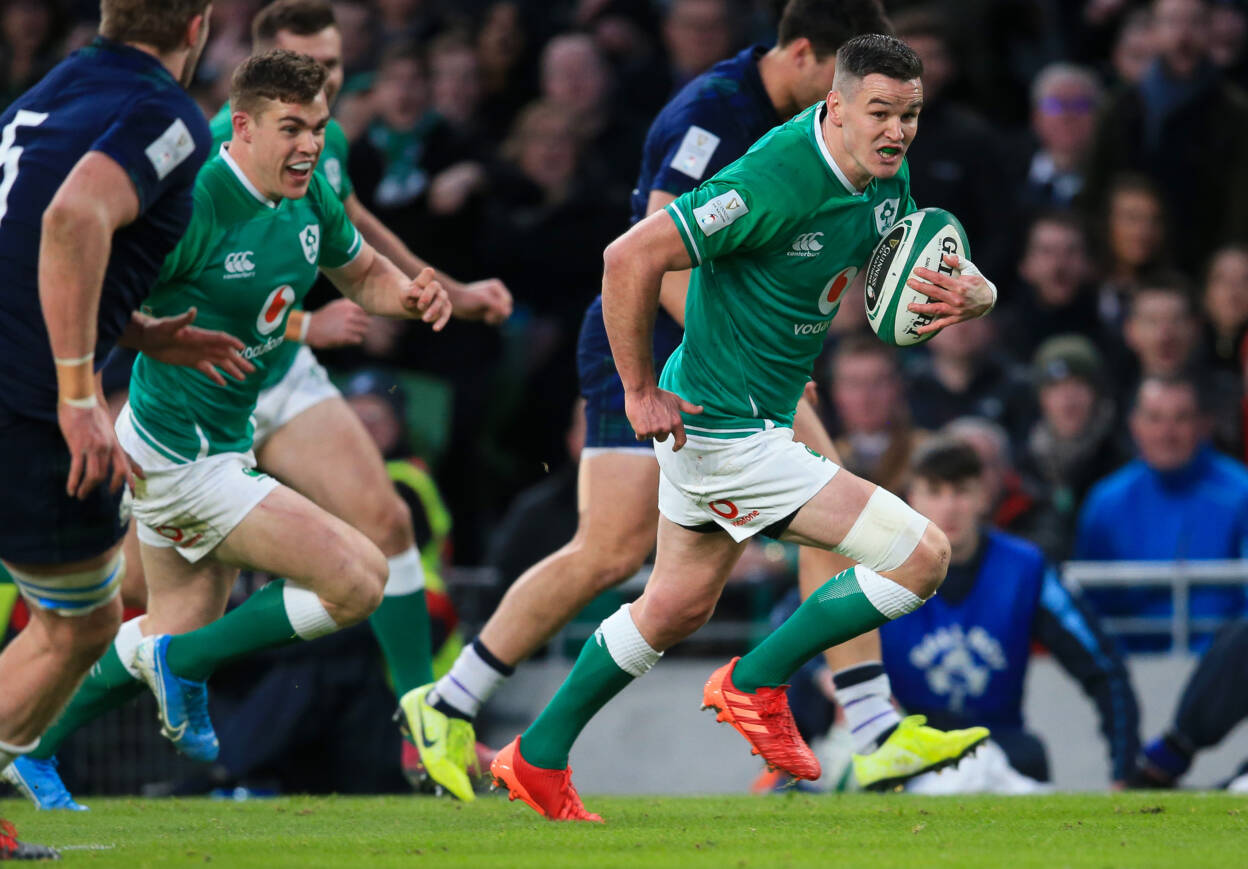 On the occasion of his 89th Ireland cap, Sexton scored an early try and landed five of his six kicks at goal before making way for Ross Byrne in the 73rd minute. He showed no ill-effects following his injury issues and was content to see Ireland beginning the new decade – and era – in a winning fashion.

“I felt good. Obviously rusty. It’s tough when you’re in a brace for three weeks, you can’t do anything,” said Sexton. “Then for three weeks I worked my socks off trying to get fit for Portugal. I didn’t train that well at the end of last week, start of his week.

“Just delighted to get the win. First game of this tournament is all about winning. Last year, the England game here was Triple Crown gone, Grand Slam gone and you’re in a battle to chase the Championship.

“We’re alive in everything (after today) and that’s where you want to be. We knew it was going to be tough. it’s always difficult to come together and have a perfect game. I thought we saw glimpses of what we could do and some of the ideas that we had.

“We couldn’t get two scores clear. We had chances to do it. If you can go two scores clear it allows you to open up and really try to get that next score. When it’s four points, seven points, it’s an arm wrestle and you have to keep playing in the right areas.”