Aldi & The IRFU Announce Latest Winners Of Aldi Play Rugby Sticker Competition 28/1/2020 Aldi and the IRFU today announced the latest winners of the hugely successful Aldi Play Rugby Sticker competition for primary schools, which ran from August - November last year. The competition gave every primary school in the country the chance of winning one of two €50,000 sports facility makeovers and the two winning schools are St. Peter & Paul’s National School, Drumconrath, Navan, Co Meath, and St. Joseph’s National School, Leitrim. Pictured is Aldi Play Rugby Ambassador Paul O’Connell with pupils from winning school St. Joseph’s National School, Leitrim. Due to the phenomenal success of the last two rounds of the competition, Aldi also announced today that it will return for 2020, and stickers will be available in stores from THIS Friday, 31st January. The competition is easy to enter and works by primary schools collecting 300 of Aldi’s exclusive Irish rugby men’s and women’s stickers for their primary school. Available in Aldi’s 140 Irish stores, shoppers collect one sticker for every €30 they spend in store between 31st January & 24th April. Mandatory Credit ©INPHO/Tommy Dickson

The competition gave every primary school in the country the chance of winning one of two €50,000 sports facility makeovers.

The competition prizes this time around have increased, as well as two primary schools winning €50,000 to put towards upgrading their sports facilities, 10 runner up primary schools around the country have each won €10,000 to spend on improving their sports facilities. In addition, one lucky runner up school has won a training session with Aldi Play Rugby Ambassador, Paul O’Connell along with a new set of school jerseys. Every primary school that returned a completed poster received an Aldi Play Rugby sports kit worth €100.

“We are in dreamland, so appreciative to Aldi for the money, it’s a transformative amount for the school and pupils and local community who will benefit for years to come.”

“The possibilities are endless now thanks to Aldi. Huge amount to invest in the school for the future. I would encourage all primary schools to take part.”

Due to the phenomenal success of the last two competitions, Aldi also announced today that it will return for 2020, and stickers will be available in stores from Friday, 31st January. The competition is easy to enter and works by primary schools collecting 300 of Aldi’s exclusive Irish rugby men’s and women’s stickers for their primary school. Available in Aldi’s 140 Irish stores, shoppers collect one sticker for every €30 they spend in store between 31st January & 24th April. 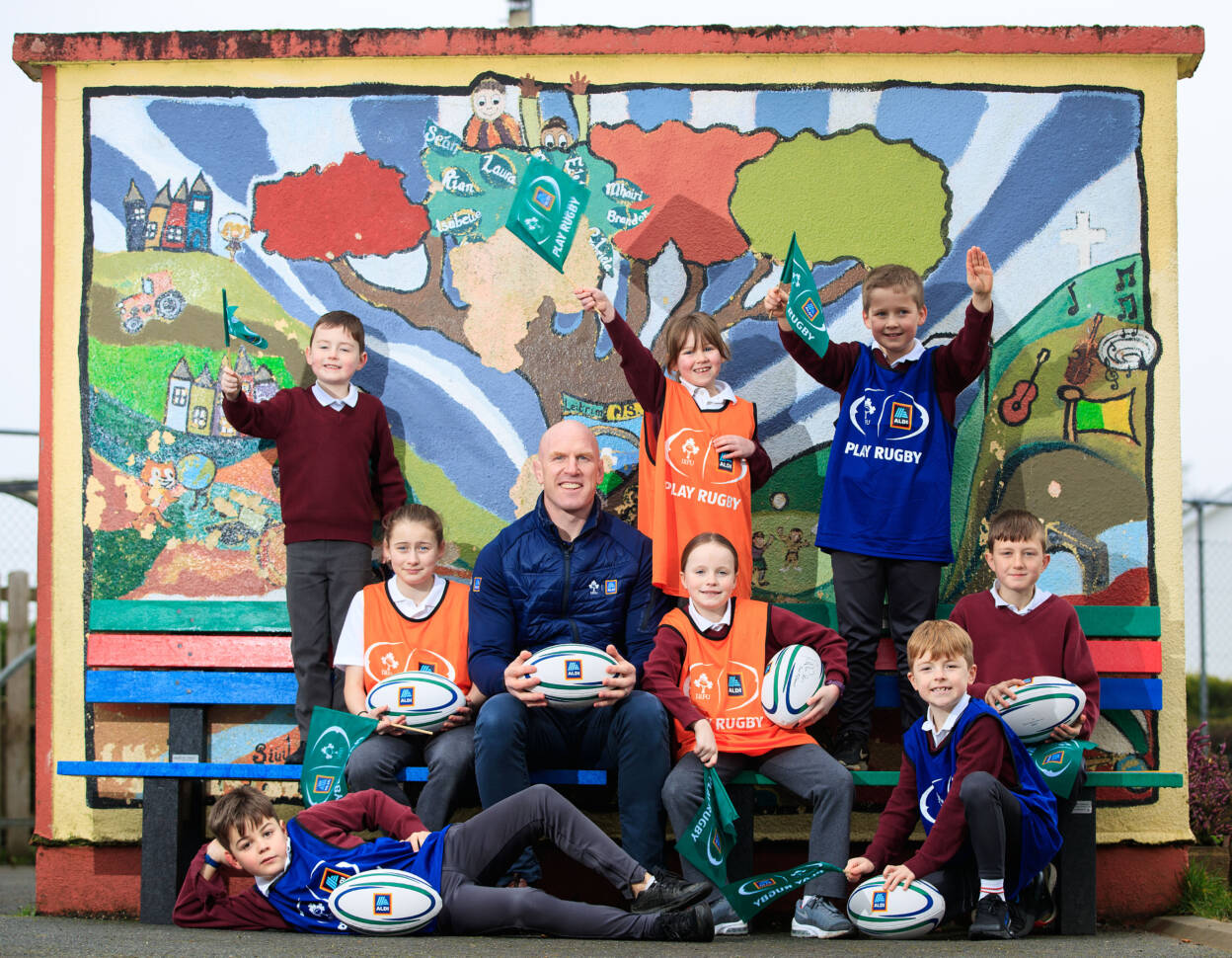 Participating primary schools add the stickers to the Aldi Play Rugby Poster and for every 300 stickers collected, are in with a chance of winning. Open to primary schools nationwide, teachers, coaches, parents and schoolchildren interested in taking part in the competition can learn more by visiting www.aldi.ie/playrugby

“As the Aldi Play Rugby Ambassador I’ve seen first-hand how the support Aldi has given, has helped grow the sport hugely in primary schools around the country. This sticker competition is just one of many initiatives Aldi and the IRFU have worked together successfully on, and I would encourage all primary schools around the country to take part. As the saying goes – ‘If you’re not in it, you can’t win it!’ Well done to the most recent winners, I have no doubt that these prizes will make a huge difference in the schools over the coming months and years.”

Aldi Ireland Group Buying Director John Curtin said: “We’re now into our fourth year as the Official Fresh Food Partner of the IRFU, and what better way to celebrate than by investing over €1.2 Million in primary schools sports facilities. I would like to congratulate all the primary schools that have taken part so far. We as a business are thrilled to be part of Ireland’s rugby success from grassroots level up and to be supporting young talent through the Aldi Play Rugby Primary school’s programme.”

IRFU President Nicholas Comyn said: “We want to congratulate all of the schools that have won funds to upgrade their sports facilities as part of this competition, and we are delighted to see Aldi bring back the promotion in stores. This competition has been a massive success for all involved. Aldi Play Rugby has gone from strength to strength over the past three and a half years, and now more and more school children, both boys and girls, are getting involved in the game and leading healthier active lifestyles. The sticker promotion is giving schools across the country the chance to win some amazing prizes which we know will only further help the spread of the game at grassroots level.”

Due to the popularity and success of the Irish Men’s and Women’s teams, rugby as a sport is growing rapidly across Ireland The IRFU and Aldi have created a grassroots programme with Aldi Play Rugby, that can potentially give every primary school child in the country a chance to have a go and take part in the non-contact rugby programme. The Aldi Play Rugby programme provides everything that schools and teachers need to get started, and this includes sessions with local IRFU staff, online coaching resources and free coaching equipment. The overall objective of the programme is to encourage schoolchildren to get active, participate in regular exercise in a safe and controlled environment and to eat healthily.

The Aldi Play Rugby programme has gone from strength to strength with over 109,000 children from over 1,200 primary schools across the country taking part.

Schools, teachers and coaches interested in getting involved can register at www.aldi.ie/playrugby