By Ryan Bailey in Hamilton

Stacey Flood in action for the Women's 7s ©INPHO/Billy Stickland

Sitting in the Player’s Lounge overlooking the indoor pitch at the IRFU High Performance Centre, Stacey Flood leans back and laughs. As much as the new home of the Ireland Sevens programme is a world-class facility, she has spent far too much time inside these four walls for anyone’s liking.

“It’s great and all,” Flood smiles. “But also tough to be in here every day knowing you won’t be on that next plane or you aren’t even in the selection conversations.”

It has been a difficult 18 months for the 23-year-old. An ever-present in the Ireland Women’s Sevens side since coming through the underage ranks under Stan McDowell, Flood has enjoyed comebacks and then endured setbacks in recent times. False dawns.

Forced to go under the knife to rectify a slow-healing navicular stress fracture in her foot, Flood played the opening tournament of last season’s HSBC World Sevens Series in Dubai before her injury frustrations began.

What was initially said to be a four-month lay-off turned into an eight-month spell on the sidelines and while Flood briefly returned last summer, a further setback was around the corner when she suffered a second stress fracture in the other side of the same foot.

“I was compensating because of my original injury,” she says. “And then I had to have a second operation last November on a stress fracture in my fifth metatarsal. It has been a really tough year.”

Flood played in the 2019/20 World Series opener in Colorado but she missed the December double-header in Dubai and Cape Town, instead forced to stay back in Dublin and work through the monotony of another rehab programme.

As a key member of the side in recent seasons, the mental fatigue of her injury travails was often more draining than the physical toll of two operations and the subsequent comeback.

“It does get hard staying around at home when the girls head off to tournaments,” Flood continues. “It was my first big injury and I really struggled. I know people say it’s better to talk about it but when you talk to your family they don’t really know what you’re going through. 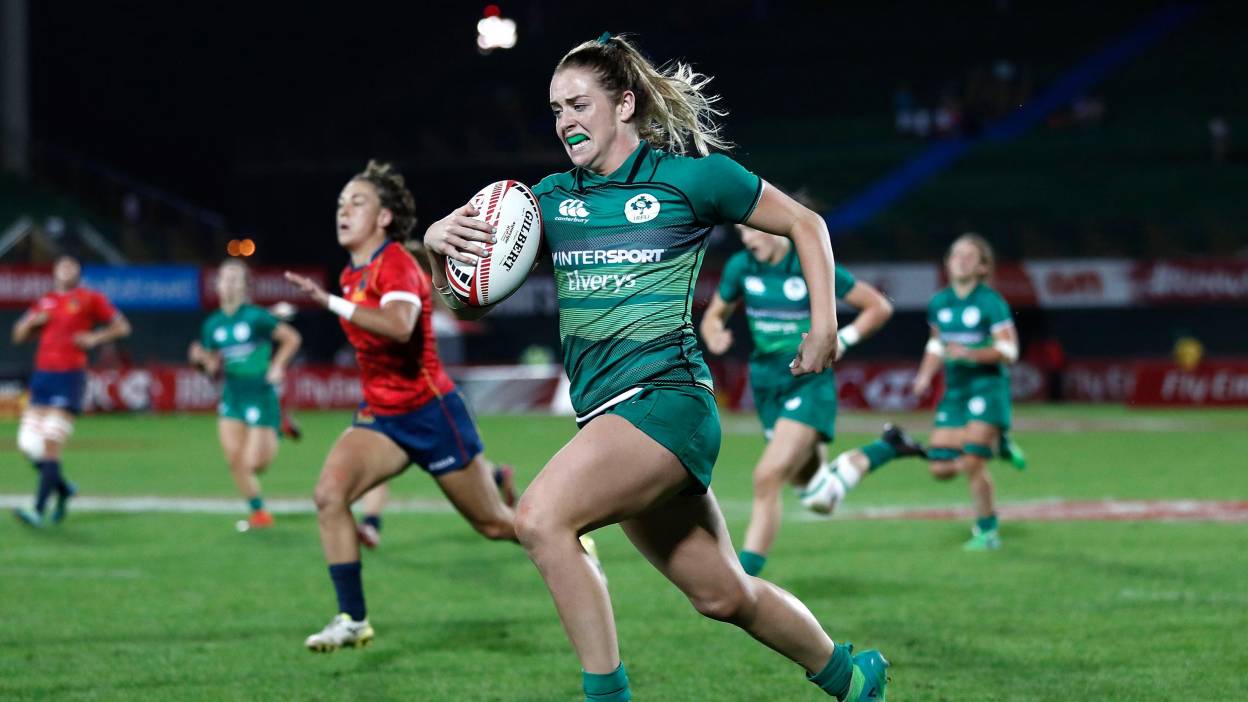 “Thankfully, myself and [Ashleigh] Baxter stuck together through the year which was really good. If we didn’t have each other, I would have really struggled to even talk to anyone. She knew exactly how I was feeling, and I knew how she was feeling.

“We always had each other when the girls were going away and that was a really big thing for me. Every Friday we always ended up crying to each other on the way home just talking about the week because you really dwell on things.”

Using the bitter disappointment of missing out on the chance to play in Dubai and Cape Town, Flood channelled her frustration into ensuring she returned fitter and stronger than before two cruel injury setbacks and the 31-time capped Sevens international is back for the double-header in Hamilton and Sydney.

Flood’s return, coupled with Lucy Mulhall‘s inclusion in McDowell’s squad for New Zealand this weekend, is a major boost for Ireland heading into their Pool C opener against Canada on Saturday at the FMG Stadium Waikato (9.52am local time, 8.52pm Irish time -1).

“I knew I just had to get myself back and fit,” she adds.

I found it hard not going but also had this focus on getting back to my full potential to help the team. I just can’t wait to get back in the jersey as I haven’t been able to play to my full potential in a while. I’m feeling fit and healthy and it has been a while since that.

“Whenever you put on the Ireland jersey, there are always nerves and so much pride but when you miss out on that jersey for a while, you do appreciate it so much more. I have learned to treasure the jersey because not everyone can or will get to wear it, so you have to represent it the best you can.

“It was a tough year so getting back into it this weekend is a really big thing for me.”