Noel McNamara‘s Ireland Under-20s will face France, Argentina and Japan in this summer’s U20 World Championship after the Pool draw and match schedule for the 2020 edition of the tournament was announced by World Rugby.

The tournament will run from 28 June to 18 July and be played across five match days in northern Italy, with Ireland paired in Pool A alongside two-time defending champions France, Argentina and recently promoted Japan, who won the World Rugby U20 Trophy last year.

McNamara’s side, who finished eighth at the 2019 U20 World Championship in Argentina, will open their campaign against Argentina on Sunday, June 28 at the Peroni Stadium in Calvisano, where they will also face France on match day two on Friday, July 3.

Ireland, who are currently preparing for their Under-20 Six Nations opener against Scotland at Irish Independent Park on Friday, January 31, will conclude the Pool stage against Japan at the Payanini Center in Verona, with the three Pool winners and the best runner-up progressing to the semi-finals.

In Pool B, Australia will face six-time champions New Zealand, Wales and Georgia, while hosts Italy have been grouped with 2012 winners South Africa, three-time champions England and Fij in Pool C.

Upon confirmation of the pool draw and match schedule, World Rugby Chairman Bill Beaumont commented: “Every year the World Rugby U20 Championship showcases the most promising young rugby players and we see year after year graduates from the competition succeeding at the highest level.

“Rugby World Cup 2019 in Japan featured 228 players who initially represented their country in this tournament and I invite all rugby fans to follow matches closely for the next rugby stars of tomorrow.

“Italy have proved incredible hosts in the past and we are confident rugby strongholds like Viadana, Calvisano, Verona and Parma will deliver the best possible stage for the tournament.”

FIR President Alfredo Gavazzi added: “We are delighted to host the World Rugby U20 Championship and the very best players from all around the globe again.The 2011 and 2015 editions had a great impact on our rugby community, attracting fans and new participants to the game, and we look forward to delivering three exciting weeks of competition while bringing the Azzurrini to play in all four host cities.

“Rugby has significantly grown in our country over the last decade and we’re proud of what we have achieved in the recent years, consistently placing our U20s among the top 10 teams in the world. 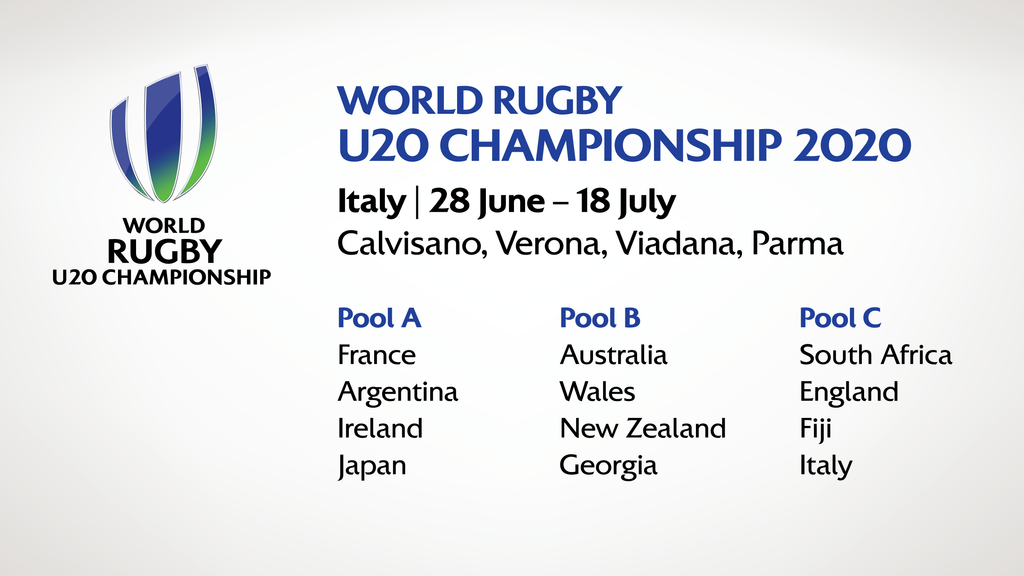 “We are confident the established pathway for our youngsters is the right one to keep on pushing Italian rugby forward and we sincerely look forward to receiving the future stars of world rugby, offering such a high-profile competition to our growing audience in the country.”

Before the U20 World Championship, Ireland will be in Under-20 Six Nations action as McNamara’s charges open their 2020 Championship against Scotland in Cork on Friday, January 31 (kick-off 7.15pm and tickets are available to buy here).