24 August 2019; David Whitten, captain of Queens University Belfast, receives the Maxol Dudley Cup from Gavin O'Donnell secretary of IURU, left, and Kevin Paterson, Sales Manager Maxol Group, centre, after victory in the Maxol Dudley Cup Challenge match between Dublin University and Queens University Belfast at The Dub Pavilion in Queens Sports Pavilion, Belfast. This is Maxols 28th year of IURU sponsorship, one of the longest and most enduring rugby sponsorships in Ireland. Photo by Oliver McVeigh/Sportsfile *** NO REPRODUCTION FEE ***

Queen’s Sports at The Dub in Belfast was the venue on Saturday last for the Irish Universities Rugby Union’s (IURU) season opener, the Maxol Dudley Cup Challenge, where holders Queen’s University Belfast RFC, who finished fourth in All Ireland League (AIL) Division 2A last season, successfully defended the cup on a score line of 41-35 against the challenge brought by Dublin University FC, semi-finalists in AIL Division 1A last April.

The Dudley Cup has been the blue-riband Senior Intervarsity competition for the IURU for over 115 years.  The IURU’s change last year to challenge format (similar to New Zealand’s Ranfurly Shield) has reinvigorated this wonderful competition, with the holders asked to defend the trophy a number of times a year. 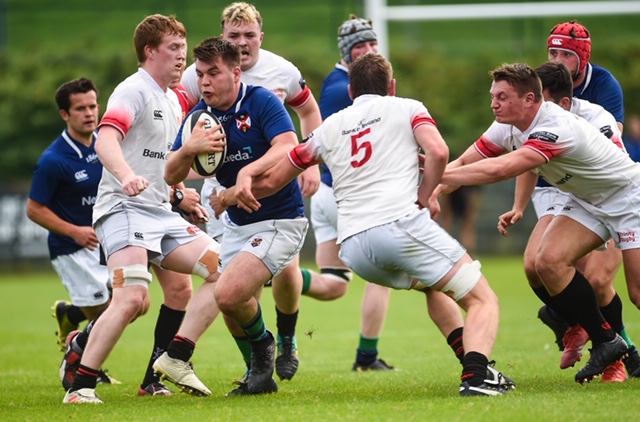 Having won the trophy in their first challenge in November 2018, it was fitting that the first defence Queen’s had was against Dublin University, a rivalry that can be traced all the way back to the 1870s, making it the oldest rivalry in Irish university rugby.

Queen’s started the match at a ferocious pace, dominating possession and territory for much of the initial quarter.  The opening score came after 4 minutes, where multiple phases of play saw left winger Johnny Hunter gain possession and carry the ball over the line close to the right corner.  With the conversion missed, the score stood at 5-0 to Queen’s.

Shortly afterwards, with Trinity trying to run the ball from within their 22’, a knock-on was gathered by Queen’s Captain, David Whitten, who cantered into the left of the posts.  The conversion by Ritchie McMaster left the score at 12-0 to Queen’s after 11 minutes.

Trinity did make a number of incursions into Queen’s territory during this period, the most promising of which led to a cross-field kick within the Queen’s 22’ which was blocked down by the onrushing defence, gathered and taken the length of the pitch for a try Queen’s under the posts by centre Robbie Johnston, again converted to leave the score with 20 minutes gone at 19-0 to Queen’s. 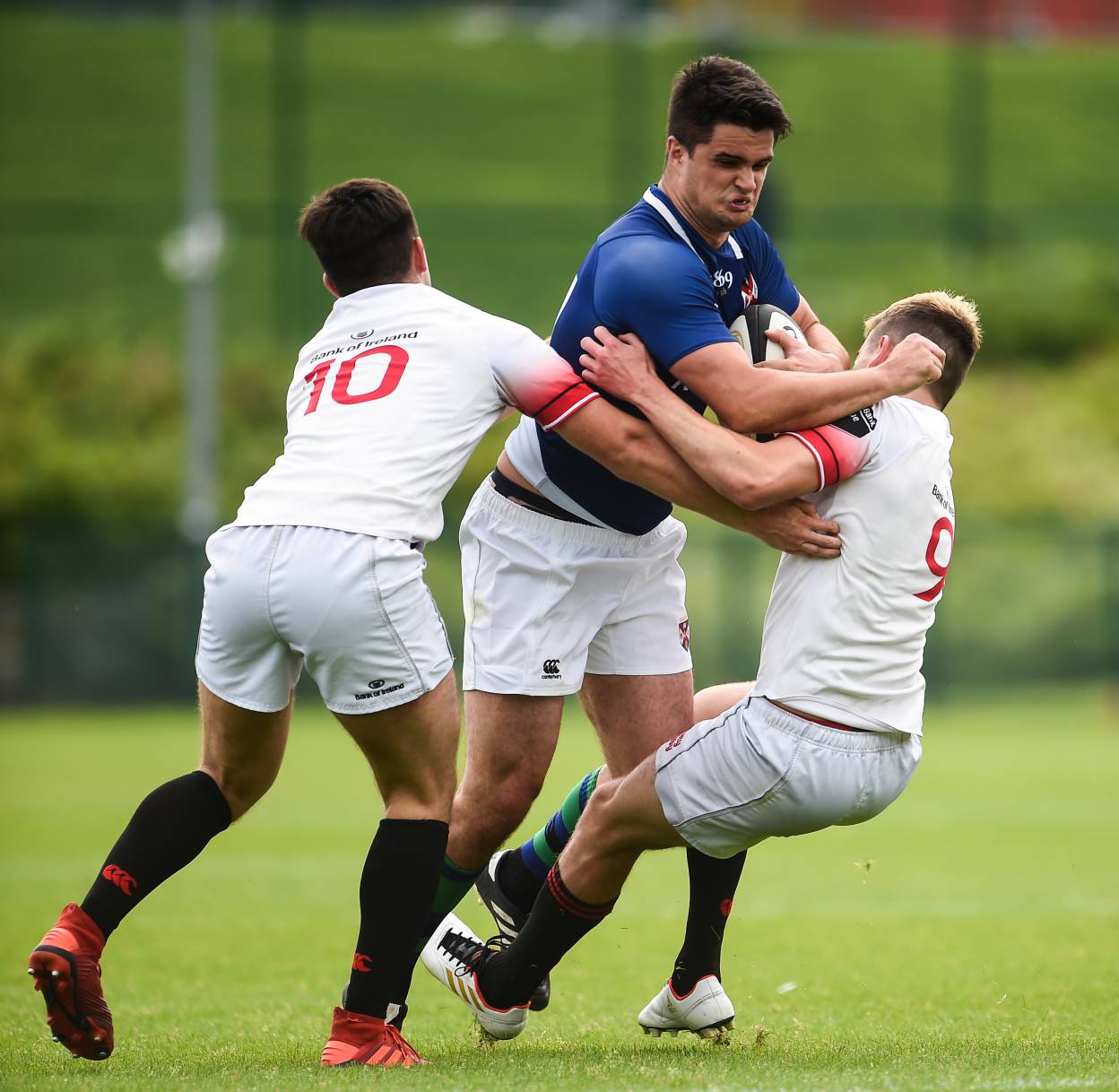 At this point, Trinity raised the tempo of their game and gained consistent territory and possession, with No. 8 Patrick Nulty carrying the ball very well.  A penalty against Queen’s for not supporting their own weight was converted by Trinity out-half Micheál O’Kennedy, and this was quickly followed by a try by left wing Liam McMahon at the end of good interchange play by Trinity, converted by O’Kennedy. This put the score at 19-10 on 29 minutes.

Queen’s responded immediately on the restart by getting hands on the ball in a Trinity ruck, which led to a successful penalty by Ritchie McMaster and a score line of 22-10.  Trinity resumed the battle in the Queen’s half, though will be disappointed their 10 minutes or so of sustained pressure only led to converted penalty as the half drew to a close.

Their disappointment turned to frustration on the half-time whistle, as Queen’s regained composure to put right-winger Stuart McIlwaine in for a try in the corner.  As the conversion was missed, the half-time score stood at 27-13 to Queen’s, with still plenty to play for.

Trinity started the second half brightly, with their early pressure leading to another successful penalty goal pulling the score back to 27-16.  However, two Queen’s converted tries in the space of 5 minutes would prove to create an insurmountable task for Trinity.  Firstly, hooker Alex Clarke finished with an impressive try following a super run from full-back Michael Orr. Then, another barnstorming run from the excellent Whitten, put No. 8 Andrew McGrath in for the crucial try on 50 minutes.

With plenty of time on the clock and with Queen’s showing signs of wilting, Trinity increased the pace and intensity of their game. A yellow-card for prior try-scorer Clarke left Queen’s down to 14 players on 52 minutes, and at this point former Ireland Students scrum half, Conor Lowndes, who had come off the bench for Trinity, was having a big impact.

The Trinity pressure eventually paid off at the start of the last quarter, when multiple phases saw Trinity right winger Donal Liddy squeeze in for a well-deserved try.  Lowndes, now place-kicking, was successful with the conversion from wide out on the right.

Trinity immediately resumed the battle and within 5 more minutes had scored another try on the right, this time from prop Simon Clear, again converted by Lowndes, leaving the score-line at 41-30 on 70 minutes and Trinity looking rampant.

As Queen’s threw everything into defence, Trinity kept coming at them and with minutes to go crossed the line again with a well worked try for full-back Aran Egan to the left of the posts.  Lowndes surprisingly hit the post with closest of his kicks, which meant the score stayed on 41-35.  Despite Trinity having a number of further opportunities, a couple of handling and positional errors put pay to what would have been the most remarkable of comebacks.

On the final whistle, Queen’s celebrated a deserved victory and Trinity reflected on what might have been in this typical university match-up with high-scoring, open and running rugby, full of endeavour and a brilliant advertisement for university rugby in Ireland.

So, Queen’s retain the Dudley Cup for now, which is another achievement in their historic 150th anniversary year and an indication of their ambitions to take the next step into Division 1 of the AIL League this coming season.

The Dudley Cup match was followed by a U-20 challenge match between the same clubs, which was won by Dublin University FC on a score line of 20-38 the visitors.