Chris Cosgrave played a starring role as Leinster completed an unbeaten run in the Under-19 Interprovincial Championship with a comprehensive 49-14 win over Munster at Maynooth University.

Under-19 Interprovincial Championship: Round 1 Review

Under-19 Interprovincial Championship: Round 2 Review 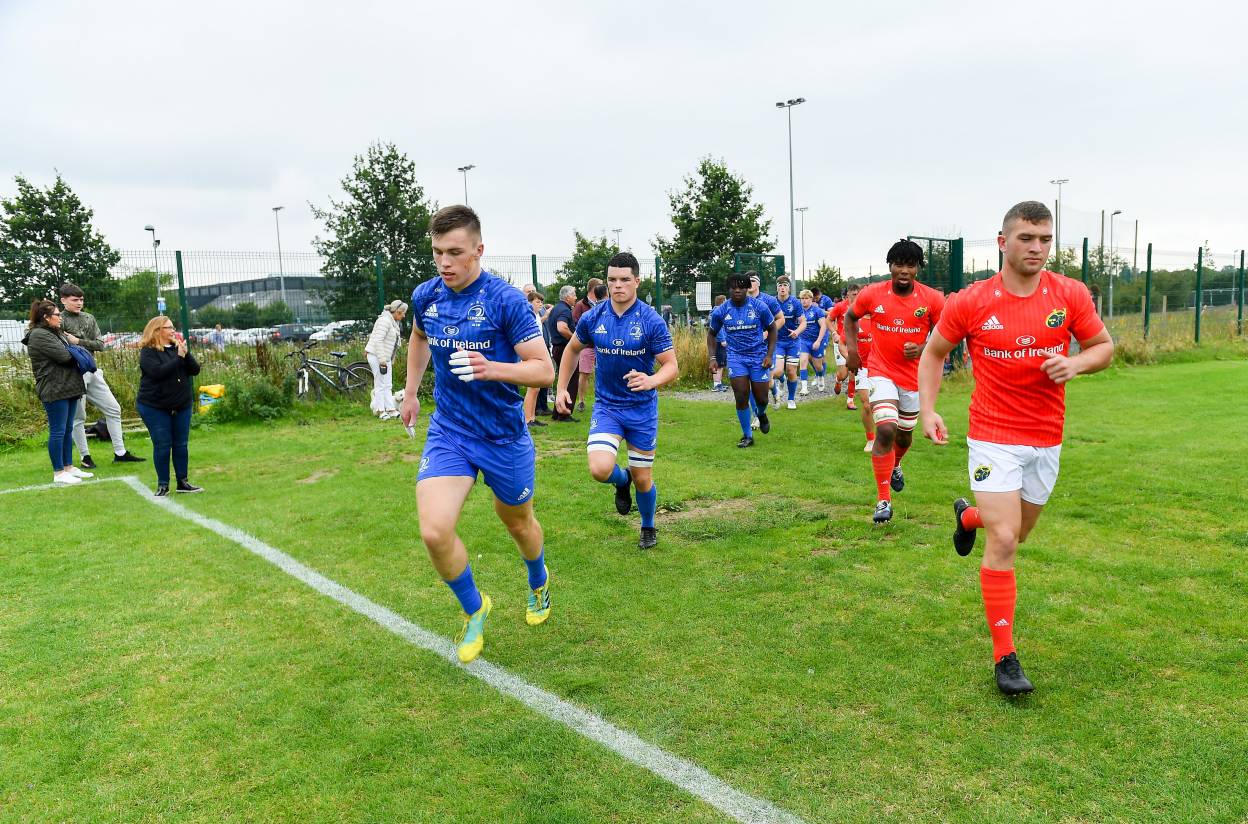 Sunday’s final round double-header produced a flurry of tries and some excellent rugby, with Leinster retaining the title thanks to three victories-out-of-three and an overall haul of 14 points. Connacht finished second on six points, just ahead of Ulster on scoring difference, with Munster close behind in fourth.

Front rowers Sam Illo and Levi Vaughan, two of Leinster’s five personnel changes, crossed for the opening tries as the table toppers edged out the Munster pack in the physicality stakes. The front-foot ball allowed full-back Cosgrave and his fellow backs to display their skills.

Munster, who were pipped by Ulster last time out, grew into the contest and worked the ball wide for Ireland Sevens international Aaron Leahy to touch down. However, Leinster’s impressive scoring rate continued as they took a 28-7 lead into the break.

The appreciative crowd at the MU North Campus venue watched man-of-the-match Cosgrave break past the covering John Forde and Jamie Shanahan to score from the right wing, while centre Simon O’Kelly, another of the St. Michael’s College contingent, put his name to the bonus point try.

Cosgrave, an Ireland U-18 Schools international these last two seasons, was in terrific form with his right boot, knocking over all seven conversions from all angles to complete his 19-point tally. He finished as the tournament’s top points scorer with 42 points, well clear of Ulster’s Reece Malone (24 points).

Giving his reaction afterwards, Leinster U-19 coach Andy Wood said: “It was satisfying to get to the final game of the series and to put out our best performance. It is a great way for the entire squad to round off the summer of work.” 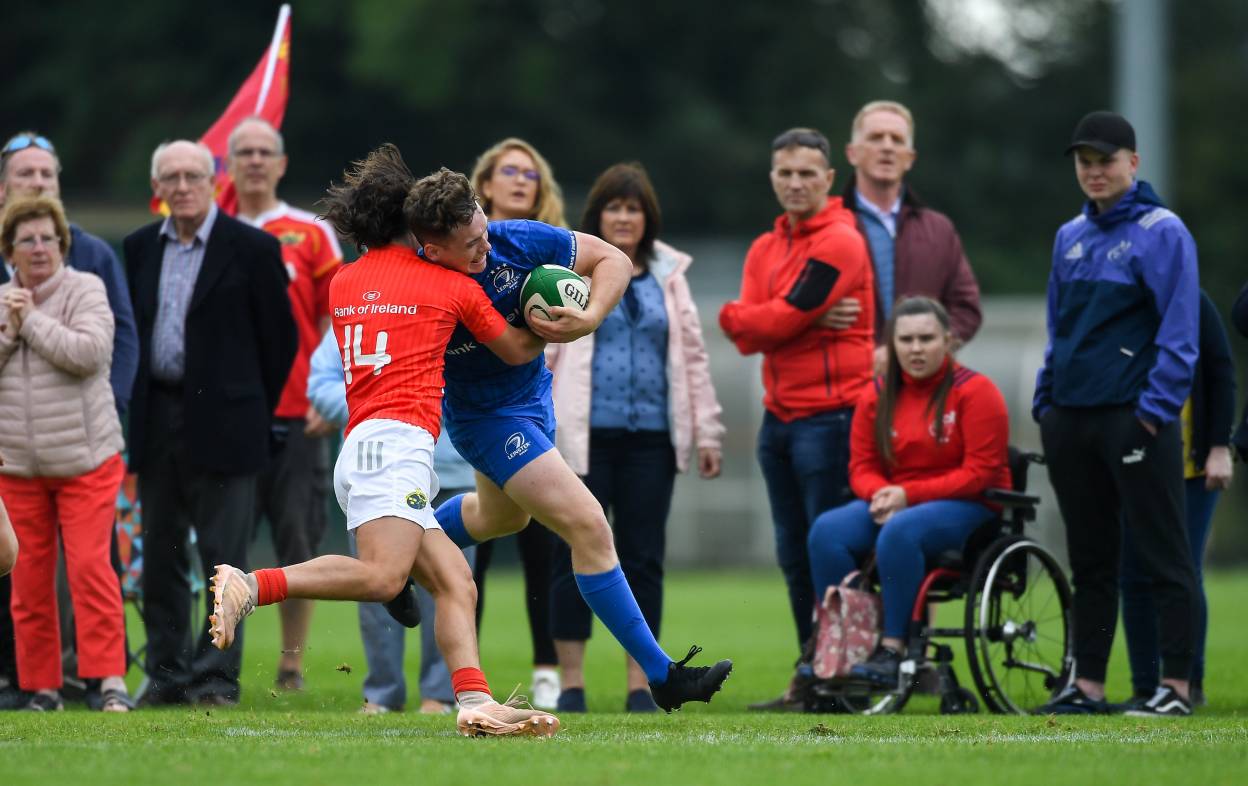 Meanwhile, Connacht erased a 12-point second half deficit against Ulster to finish as the Championship’s runners-up. Centre Shane Jennings’ third try of the tournament helped the westerners to prevail 28-27 in a very closely-fought curtain-raiser.

Ulster’s 12-7 interval lead owed as much to their defensive grit as it did to their efficient attacking. They quickly got on the front foot, their work-hungry pack setting the tone before out-half Malone was able to snipe over for an unconverted try, barely three minutes in.

Just when it seemed like Connacht’s larger share of possession and territory would pay off, Ulster kept them at bay. Indeed, they worked their way downfield for their talismanic flanker and captain Reuben Crothers to cross for the third time in eight days.

Winger Rory McCleane went in under the Ulster posts just before half-time, set free by scrum half Hubert Gilvarry’s break down the left wing and well-timed offload. However, a powerful set of phases from the Ulster pack on the resumption allowed Malone to convert Tom Stewart’s try to restore the 12-point gap.

Play swung back and forth between both 22s, but Ulster crucially lost centre Jack Harte to the sin-bin for repeated team penalties. With their bench giving their a further lift, Connacht rumbled over the line with replacement hooker Eoin de Buitléar grounding the ball.

He soon followed up with his second try, the end-product of a concerted spell of pressure from the Connacht forwards, only for the surefooted Malone to land a brilliant penalty from the Connacht 10-metre line which reclaimed the lead for Ulster at 22-21.

Both defences were thoroughly tested during the closing ten minutes. Just a kick of the ball separated them in the end as Jennings’ try from a Cathal Forde kick through was converted by its creator, whereas there were no extras added to Conor McKee’s cracking late score, which exhibited the best of Ulster’s free-flowing backs and the scrum half’s clever support line.

IRFU UNDER-19 INTERPROVINCIAL CHAMPIONSHIP – ROUND 3 RESULTS:

IRFU UNDER-19 INTERPROVINCIAL CHAMPIONSHIP – TOP SCORERS AFTER FINAL ROUND: