The Ireland Women’s Sevens team will be fourth seeds at the upcoming Rugby Europe Olympic qualifying tournament after winning four of their six games at the European Sevens Grand Prix Series opener in Marcoussis.

Ireland gave tournament hosts and eventual champions France their toughest test of the weekend in a nail-biting semi-final. Tries from Eve Higgins and Amee-Leigh Murphy Crowe secured a 12-7 second half lead, but les Bleues pipped them by two points in the end thanks to replacement Chloe Pelle’s converted score with two minutes remaining.

Earlier on, Stan McDowell’s charges had laid down a marker by twice coming from behind to defeat quarter-final opponents England 24-19 thanks to tries from Murphy Crowe (2), Higgins and Stacey Flood. However, the likes of Murphy Crowe, Flood and Louise Galvin sat out the Bronze final which Spain won 19-0. 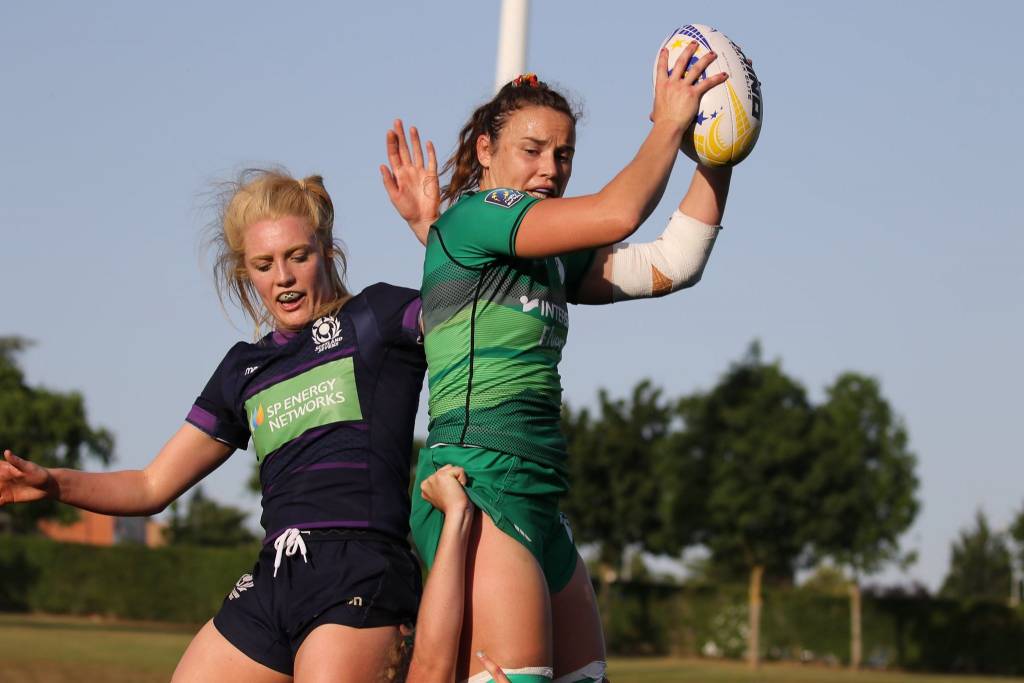 While disappointed to lose their last two games, it was a really positive couple of days for fourth-placed Ireland in the sweltering heat. Captain Lucy Mulhall had a successful return from injury and young forwards Brittany Hogan and Kathy Baker made six and five starts respectively as they topped their pool and enjoyed victories over Spain and England.

It was also a confidence-boosting performance for Mulhall and her team-mates to run France extremely close at the semi-final stage. Russia, who lost the Cup final 15-7, complete the quintet that will be leading the charge for that prized Olympic berth in Kazan on July 13-14.

It was England who seized early control of the scoreboard during the Cup quarter-final, Amy Wilson Hardy crashing over from Megan Jones’ quick tap before Celia Quansah added the second try. A terrific break by Flood straight from the restart saw Ireland respond, the scrum half’s flat pass on halfway gobbled up by Murphy Crowe who had the pace to evade the chasing defenders.

Mulhall lofted over a pinpoint conversion from the right, and a levelling second try quickly followed through Murphy Crowe to make it 12-all at the break. Hogan won the restart and drove hard to gain yards, Galvin tested the defence wide on the right, and then Mulhall sprung through from the ruck, offloading between two defenders to put her supporting winger over.

An opportunist 10th-minute try from Jones put England back in front, with Mulhall only able to get her fingertips to Flood’s pass before Jones hacked through to touch down. Nonetheless, a lovely exchange between replacements Anna McGann and Higgins put the latter away from 40 metres out to square things up at 19 points apiece, Ireland impressing with ball in hand through 16 passes and five rucks.

Indeed, it was the girls in green who had more in the tank. The bench players forced England backwards with Deirbhile Nic a Bhaird, Higgins and McGann all gaining ground, the key moment coming when Flood picked straight from a ruck and dotted down despite Holly Aitchison’s despairing challenge. Higgins and Emily Lane forced a late turnover penalty which confirmed the hard-fought victory. 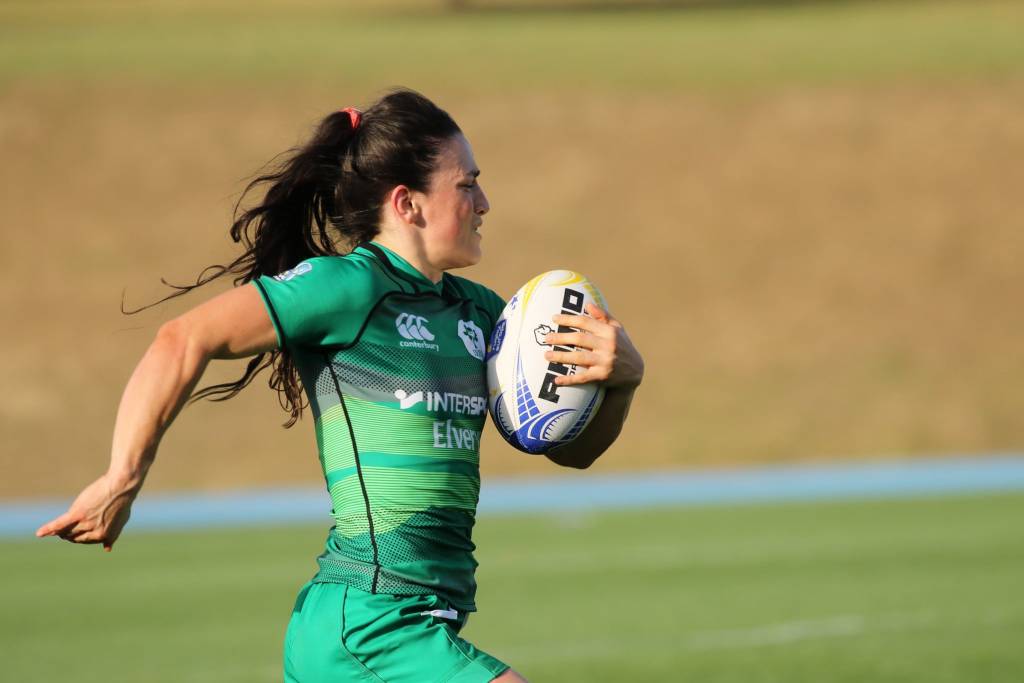 After a number of defence-dominated phases, France made the breakthrough in a nip-and-tuck semi-final clash. Anne-Cecile Ciofani had knocked Higgins’ pass to ground, but referee Maria Beatrice Benvenuti gave France the decision, and the resulting scrum possession led to Fanny Horta weaving in under the posts for a seven-pointer.

Then it was Ireland’s turn to pin the French back, initially with a promising break involving Murphy Crowe and McGann. France elected to kick from deep in response, but Mulhall regathered and set up some neat passing out to the right wing where Higgins’ excellent footwork opened up an avenue for her to dart in behind the posts and leave it level-pegging at half-time.

Clever work by Flood, as she let go of the ball after the tackle and swiftly scooped it back up, saw her spearhead a thrilling break just after the restart. Murphy Crowe connected with her on the Irish 10-metre line and she determinedly held off two chasers to land a considerable blow at 12-7. With Mulhall replaced, Higgins took the conversion but unfortunately clipped it wide.

Missing the injured Galvin and with some of their frontliners making way amid some attritional phases, Ireland ended the game with a line-up with an average age of just 22. Nic a Bhaird won a turnover penalty, but Emily Lane’s crooked lineout let France off the hook and fresh-legged replacement Pelle soon broke clear up the right wing for her 12th-minute match winner.

A depleted Ireland team lost the Bronze decider to Spain, with Galvin and Flood both sidelined and Murphy Crowe also not taking part. It was an error-strewn encounter with tiredness creeping into both sides’ play. A breakaway try inspired by Patricia Garcia and finished off by Olivia Fresneda was the difference at the interval – 7-0.

Ireland were unable to convert some late pressure into points before half-time, despite McGann and Nic a Bhaird getting them within striking distance. Missing the fulcrum of Flood and Mulhall, whose game-time was closely managed at her first tournament in over two months, Ireland ran into some dead ends and Spain wrapped up the result with a late brace from Amaia Erbina. 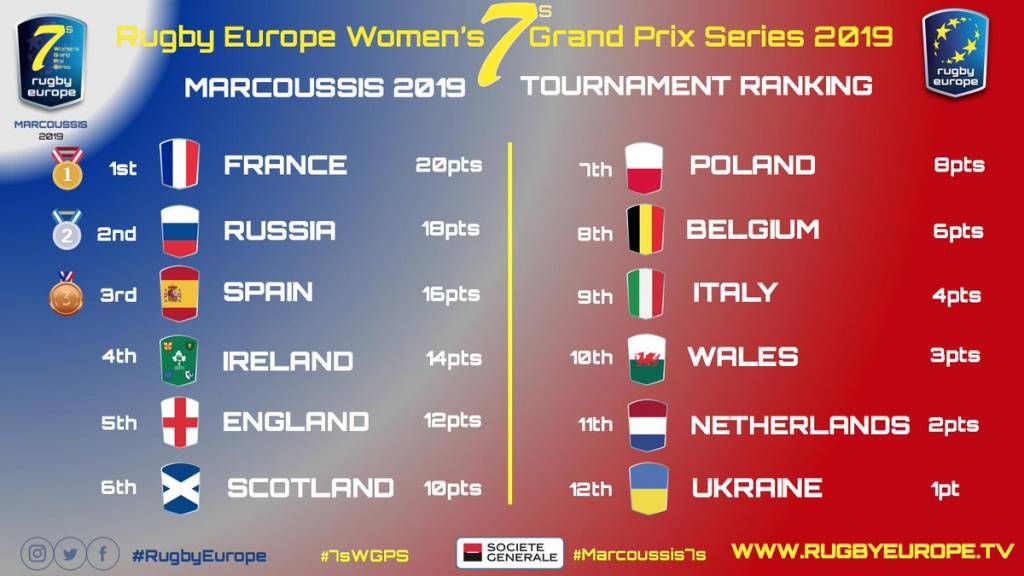