The Ireland Women’s Sevens team emerged undefeated on day one of the opening Rugby Europe Sevens Grand Prix Series leg in Marcoussis, as wins over Spain (15-0), Italy (41-5) and Scotland (22-14) guided them to the top of Pool C.

Coached by Stan McDowell, Ireland will face old rivals England in a mouth-watering quarter-final tomorrow at 10.44am Irish time. Today’s results have guaranteed the girls in green a place at the Rugby Europe Olympic qualifying tournament in Kazan. The final rankings in Marcoussis will decide the seedings for the Olympic qualifier on July 13-14.

Amee-Leigh Murphy Crowe and Hannah Tyrrell scored four times each as Ireland tallied up 14 tries in the baking heat at the FFR’s Centre National de Rugby. With fit-again captain Lucy Mulhall back in the team, they managed to avenge recent World Series defeats to Spain and Scotland and begin their European campaign on a strong footing. 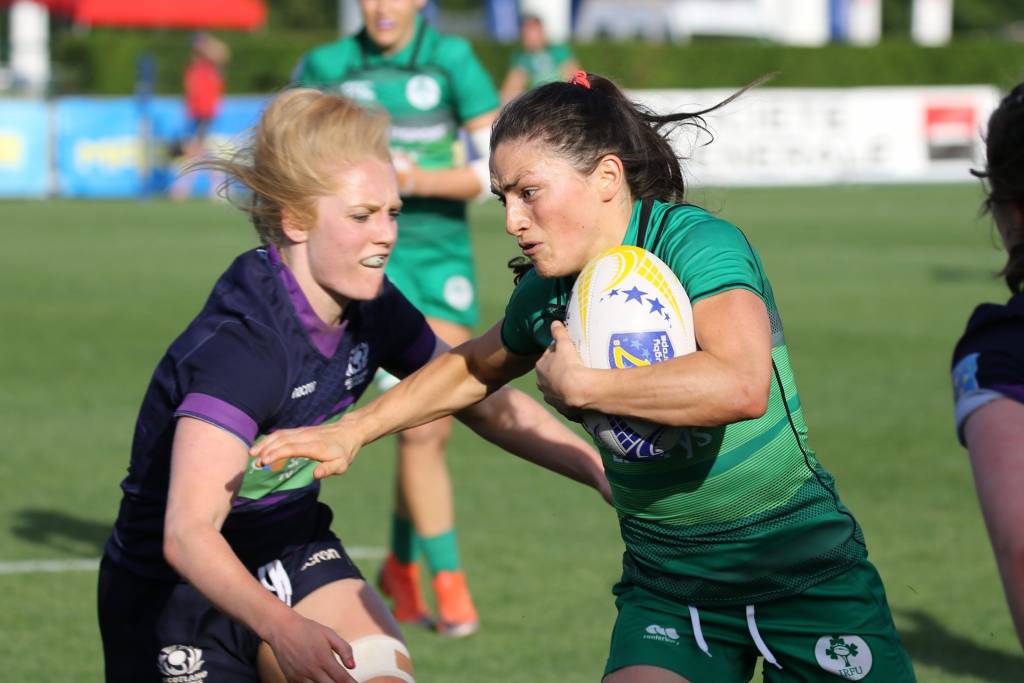 McDowell’s charges got off to a business-like start against Spain, using a knock-on advantage to run hard at the defence before Mulhall sent Deirbhile Nic a Bhaird over to the left of the posts. With her team-mates digging deep in her subsequent absence, Nic a Bhaird returned from the sin-bin to raid downfield and help to set up Murphy Crowe to double Ireland’s lead right on half-time.

Ireland maintained a high tempo and control of possession on the resumption, and their patient approach was rewarded when Nic a Bhaird picked from an 11th-minute ruck and crashed over for a 15-0 scoreline. A Murphy Crowe turnover and a midfield break by replacement Kathy Baker were further Irish highlights as their defence again kept Spain scoreless despite Anna McGann seeing yellow.

Tyrrell had some key contributions early on against Italy, tapping back the kick-off to Baker and then popping up with the scoring pass as Ireland turned scrum possession into a second-minute try from Murphy Crowe. The lineout was the springboard for their second try, Mulhall drawing the attention of two defenders and feeding Tyrrell for a 25-metre run-in. 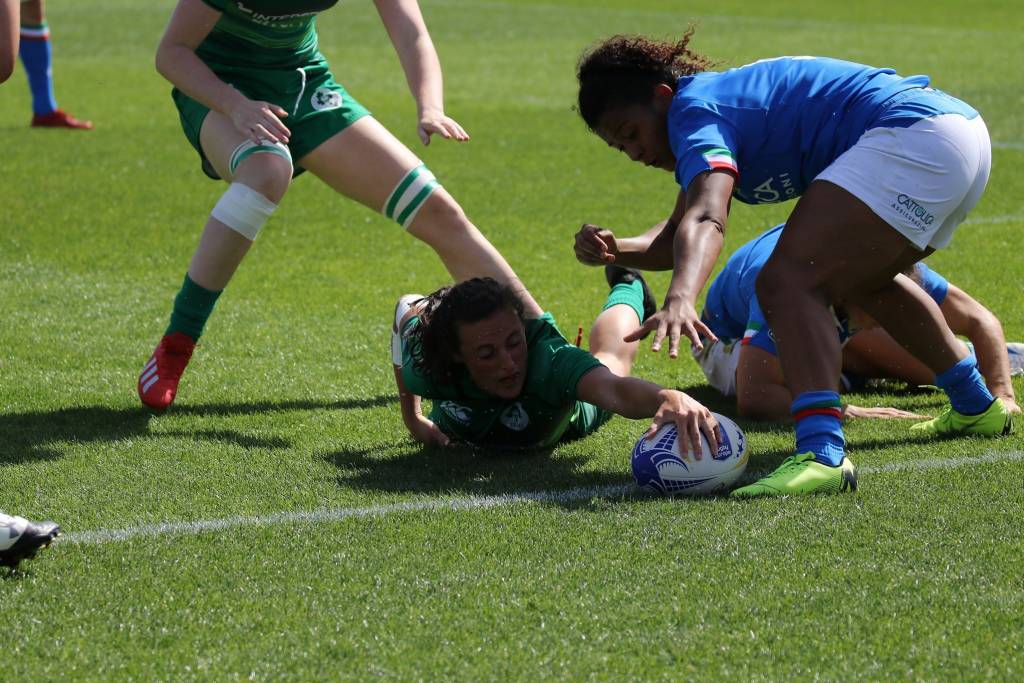 The same pair combined neatly for the next score and a fourth made it 22-0 at the break, Mulhall converting from the right after Stacey Flood’s quick tap and floated pass had set up Murphy Crowe to play in Louise Galvin. Tullamore’s Megan Burns came off the bench to finish off a swift break by scrum half Flood inside a minute of the restart.

McGann went close to scoring before Tyrrell completed her quartet of tries, crossing twice late on thanks to good build-up play from Baker, Galvin, Emily Lane and Eve Higgins who tagged on the first conversion. The Italians squeezed in a five-pointer from Maria Magatti following successive penalties from the sin-binned Galvin.

Murphy Crowe came off her right wing to pose an early threat against Scotland, and the ensuing quick ruck ball was fed wide to Brittany Hogan who finished smartly from 15 metres out. Some excellent continuity, on the back of Hogan’s turnover penalty, led to Murphy Crowe going over in the right corner via Tyrrell’s bouncing pass.

Murphy Crowe notched a quick-fire brace, sandwiching Scotland’s opener, to leave it 15-7 ahead at the break. It took a defence-splitting dummy and surging 80-metre break from Mulhall to settle the issue with just under two minutes remaining. A similar breakaway effort from Hannah Smith reduced Ireland’s winning margin right at the death. 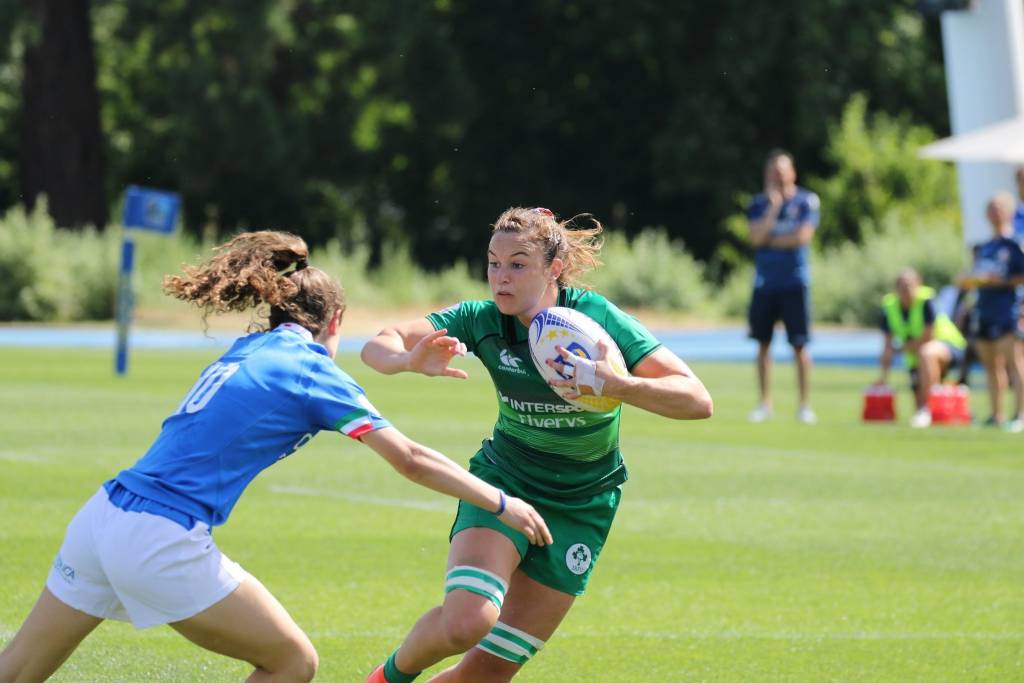 Live streaming this weekend is available on www.rugbyeurope.tv. The Marcoussis 7s is the first of two tournaments that make up this season’s Rugby Europe Women’s Sevens Grand Prix Series. The second leg takes place in Kharkiv, Ukraine on July 20-21 – the weekend after the European Olympic qualifier.