Ireland Women’s head coach Adam Griggs has told his players to ‘expect the unexpected’ when France roll into town for the Women’s Six Nations fourth round match at Energia Park tonight (kick-off 7pm).

Following their 29-27 loss to Italy in Parma two weeks ago, the Ireland Women are seeking a return to winning ways in front of a passionate home crowd, which is set to be a record attendance for a Women’s Six Nations fixture on Irish soil. Tickets are available to buy from Ticketmaster.ie.

Griggs commented: “I watched the game against Scotland that the French played a couple of weeks ago, where they probably left a few tries out there as well. There’s no doubt it, they’re a strong side. They’re going to be physical, their pack is a big pack. They can also move around and then you’ve got their halves, who control the game brilliantly.

“Our message this week is, ‘you’ve got to be expecting the unexpected’. Like any typical French team, they are pretty good at playing off the cuff and what they see. Again, we go back to talking about scrambling and adapting, and problem-solving on the move. That’s going to be a big thing for us this week.

“We’ve definitely got a couple of spots where we think we can exploit them. We’ve got to make sure we focus on that and try and get that right. Again, we’re at home. We want to come out and start well. If we can start well and get ourselves into the game, you just never know.”

When the Ireland team was initially announced on Thursday, it showed a total of five changes to the side that lined out against Italy. Juliet Short was selected alongside Nichola Fryday in the second row, but has since been ruled out through injury. Her place now goes to her Railway Union team-mate Aoife McDermott, who will make her ninth consecutive start for Ireland.

With Michelle Claffey (ankle) and Leah Lyons (AC joint) already sidelined for the remainder of the tournament, Griggs has promoted uncapped teenager Enya Breen and her UL Bohemians colleague Fiona Reidy to the starting XV. Cork’s Deirbhile Nic a Bhaird and the versatile Claire McLaughlin also deputise up front for Emma Hooban and Anna Caplice respectively.

Amidst the disappointment of the result in Parma, the Ireland coaches were encouraged by the performances of the new half-back pairing of Nicole Fowley and Kathryn Dane, whose zippy passing has earned her a second start in the scrum half role.

“I think that’s also a sign of the two players really growing into the role. Kathryn, her first game (against England) she got 10 minutes off the bench, the next game (Scotland) she gets 20 plus minutes. From those performances she earned her start. There’s a reason she played the full 80, because she was doing really well. We like her speed of service, her pass is accurate.

“It also gave Nicole a lot more time on the ball. She got to see those decisions, the likes of the cross-field kick (to set up tries for Eimear Considine and Laura Sheehan). Those two are a great example of giving them time in the saddle, I suppose, and letting them steer the team around. Now they’re starting to grow into that more and more.” 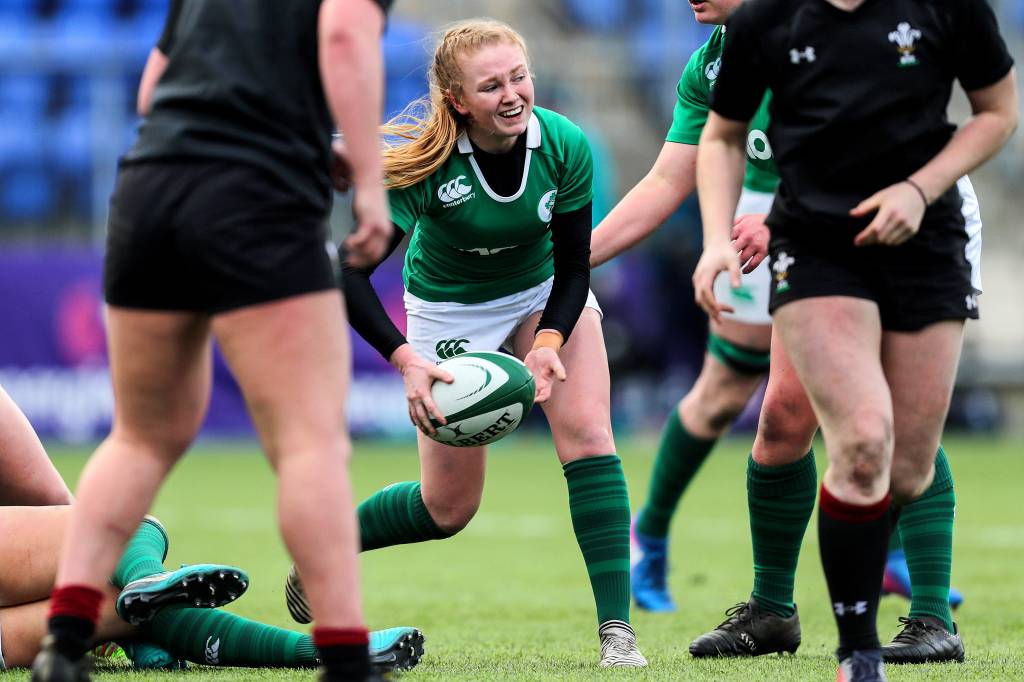 Compares to sides like England, who have returned to a full-time professional set-up this year, Griggs and his coaching staff have limited time with the squad in advance of international fixtures. The former Lansdowne and Leinster ‘A’ scrum half acknowledges that this continues to be a factor, but it is by no means the only one they have to consider.

“There’s definitely the issue of the lack of time. The other thing we spoke about as a coaching group, that probably doesn’t come up as much, is putting our players in the Test match arena. Not even so much as the rugby on the field, but the other things outside of that. We’re playing in front of bigger crowds now.

“You ask the players, some of them couldn’t hear calls and they’re having to use sign language and facial expressions. Week in, week out, our players don’t experience that. I was starting to talk about pressure and the funny things that pressure can do to you in a Test match. Yes we need more time together each week, which would be great.

“That’s probably a big thing for us at the moment that we’re learning with the number of newer caps and the younger players. We’ve only got a handful of players with over 20 caps. Even for them, they also don’t have experience week in, week out, of Test match rugby. I think that’s something that we’re probably looking at as well that’s maybe not helping us at the moment.”

Nevertheless, in order for players to get to the level of experienced performers like Alison Miller or Claire Molloy, Griggs feels it is essential to give them opportunities in competitive internationals. One of the new caps during the current Six Nations has been UL Bohs’ Nic a Bhaird, who will make her first start for the Ireland 15s team tonight.

Well used to performing on the World Sevens Series stage, the Cork native is a valuable asset for Griggs who is delighted to have her on board and excited about her potential at hooker. “She has adapted really well and probably shows her professionalism that she got off a plane from Sydney (having played in the World Series) and came straight into our 15s environment,” he explained.

“What she’s been able to do for us, she’s not the biggest hooker, but she does get around the field for us with her Sevens experience as well and with those bigger games and the bigger crowd. She’s someone that has that experience. It always helps the rest of the group out.”