She has had a long road back to full fitness, but Alison Miller is now embarking on the next phase of her international rugby career.

The Ballickmoyler native’s 2018 Women’s Six Nations journey was brought to a cruel end at Energia Park last February. In the early stages of Ireland’s 21-8 victory over Italy, she broke her fibula and tibia and suffered a compound ankle fracture in an awful season-ending injury.

Yet, a determined Miller returned to Women’s All-Ireland League action with Old Belvedere in December having also spent time in the Ireland camp as they prepared for their November internationals against the USA and England.

A 55-minute run-out in an uncapped warm-up game with Wales on January 20 was another step in the right direction for Miller ahead of last Friday’s Six Nations opener at home to England, during which she picked up her 44th senior cap off the bench.

Although the result (a 51-7 defeat) did not go Ireland’s way, the fit-again winger is delighted to be back in the green jersey, saying: “(It’s) great to be back out on the pitch. I suppose it makes all the lonely days that you were struggling worth it. There was some… well, a lot of really hard days. You’re wondering if you’re doing the right thing trying to get back considering I’ve been playing a long time.

“This is my 10th Six Nations and I suppose I’m a little bit older than some of the members of the team. But it (the recovery and training) was all worth it. It was just a great feeling to get out there after all the hard work and the bad day of last February that I endured. It was hugely satisfying to get back in the green jersey.”

Now 34 years of age, and with two Six Nations titles and a Grand Slam on her rugby CV, Miller admits the thought of international retirement did cross her mind. “Definitely. When I was on the trolley in Vincent’s (hospital) being brought in, I definitely didn’t think I’d play again,” she admitted.

“In those moments, the pain is so immense you don’t see how you can get past that. Even the three, four, five weeks at home after, you’re still in that huge pain. The pain of getting up and down, you can’t see how you could go out and play a hugely contact sport again. It’s a tough game rugby, there’s injuries and not everyone is lucky enough to get back after an injury like that. Yeah, definitely, you would think about it.” 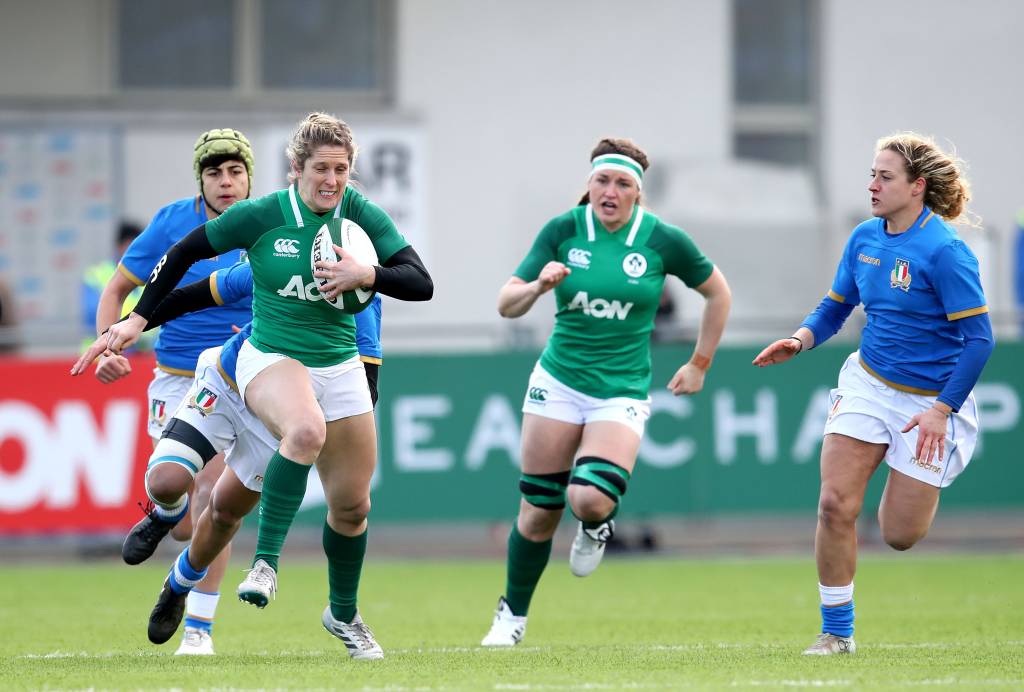 Ultimately, Miller felt a burning desire to return to the sport she has loved since her time as a student in Waterford IT. While she insists it was a never case of proving doubters wrong, the Old Belvedere and Connacht star wanted to show that a comeback was possible.

“It’s a huge honour to wear a green jersey and be involved. It’s a huge privilege. I might have maybe not missed it, you know, being at that age and life moves on but I did. I really missed it. I missed performing at the high level essentially, that feeling when you go out onto the pitch and the adrenaline.

When you consider that flanker Claire Molloy (65 caps) is the only player in the current squad with more caps than her, the presence of someone like Miller in the Ireland camp cannot be underestimated. Much like the squad’s scrum coach Mike Ross, she has seen good and bad days in an Ireland shirt – something she was keen to emphasise in the aftermath of last Friday’s result.

“It was a tough night. I actually said it to the girls, ‘there’s actually been worse defeats than this, believe it or not’. Some of the girls mightn’t have known that, but there’s been worse and they make you. It should hurt, but you hold that in there to kinda really spur you on and become a very tight-knit group.

“You use those defeats to drive everything that you do and try and become the team that you want to become. Mike Ross spoke really well in the changing room, which was really helpful. A heavy defeat, how you just decide then, you come together. There has been worse defeats than that over the years, but those teams grew as well, the way this team will.”

Despite being surrounded by a lot of new faces, one of the youngest members of the Six Nations squad is someone Miller has known for a long time. She coached St. Mary’s and Leinster hooker Emma Hooban, whom she lines out with against Scotland tomorrow night, from a very young age at Portlaoise Rugby Club and watched on with immense pride as she made her Ireland debut against the USA in November.

“It’s great to see someone like that. In 2010 I actually did a very serious knee injury and I was out of the game. I decided that our club needed young girls so myself and two other girls set up an underage team,” added the Laois teacher, who has scored 19 Six Nations tries during her prolific Test career.

“Emma always had huge ability, a great skill level and always had a good attitude. To see her come through all the way, play with the Leinster Under-18s, go on and then play Leinster senior, get capped (by Ireland) in November. I was actually very proud of her because you’ve seen her come all the way up.”