Ireland Under-20 defence coach Kieran Campbell says it was ‘humbling’ to see and hear the turnout for the team last Friday in Cork where they opened the U-20 Six Nations with a memorable 35-27 bonus point win over much-fancied England.

Spurred on by the electric atmosphere produced by the 5,764-strong crowd, the David Hawkshaw-led Ireland U-20s recovered from a shaky start to enjoy a winning debut at Irish Independent Park. They are away to Scotland tomorrow night (kick-off 7.30pm), with their only change seeing Cormac Foley replace the injured Craig Casey at scrum half.

Reflecting on the tournament’s opening night, Campbell commented: “It was hugely humbling to see the amount of support (in Cork) and also, to be honest with you, to see the passion as well. I think someone was saying after we got the final try and we were trying to get the messages down to close the game out, no one could actually hear. That gives you some reflection of what the support was like.

“We were delighted to get that type of support. We hope that we’ve given them a good show in the England game, that we’ll get a huge return again come the French game (at Irish Independent Park next month). We’re going to need that.

“I think the English guys even talked about how intimidating it was post-game. The level of noise at times was deafening. It creates the atmosphere which we can thrive in and hopefully it’s a little bit hostile for the opposition.”

On a night when Ireland dug deep to overpower a formidable English pack, Scott Penny was particularly impressive at openside flanker. The Dubliner has already made significant strides this season in the GUINNESS PRO14 with Leinster, contributing two tries in four starts for Leo Cullen’s men.

“Scott is a quality player. I think he has had good exposure at senior level. In terms of what he does, he wouldn’t be the loudest guy. It’s more how he leads in what he does,” explained Campbell, who has been Ulster Rugby Academy manager for the last four years.

“You talk about England being big, it’s pretty difficult when they’re getting smashed in behind the gain-line. That’s what Scott brought to it. He was really the guy who engineered the line speed in the game, which really allowed us to get into their big guys and make sure they didn’t generate momentum.

“It’s more how Scott leads and I suppose that is reflective of him playing at a higher level. What I’ve noticed about Scott as well is, he’s a really good person. He’s very, very applied to his detail and that reflects in how he plays.”

While versatile back Hawkshaw is the man who assumes the mantle of captain, he is part of a wider leadership group that Ireland U-20 head coach Noel McNamara has assembled for the Championship. Campbell believes they are beginning to see the benefits of this initiative.

“Noel has put together a really strong leadership group. He’s also put together strong groups for other elements of the game to take a lead. Whether it be defence or be attack. I think that’s benefited us. I think we’ve gained a level of cohesion and understanding from that, within the group.

“It has also given us some leaders as well, which I think has been hugely important. I think you saw that last Friday as well. We had some significant setbacks in the early stages and with the yellow card, but I thought within that leadership group they stood up. They gave us a genuine level of calm to build our way back into the game.

“I think credit to Noel on that, what he’s done with the leadership groups. As I say, he has set up some small mini groups to deal with certain facets of the game. Which has given us a few leaders as well which we can rely upon.”

A new addition to McNamara’s coaching team, Campbell is embracing his involvement with the national side. The former Ulster scrum half picked up three Ireland caps during his own playing days and has coached a number of squads in recent seasons, including Ulster ‘A’, the Ireland Under-19s and Under-20s, and an Interprovincial title-winning Ulster U-18 Schools outfit. 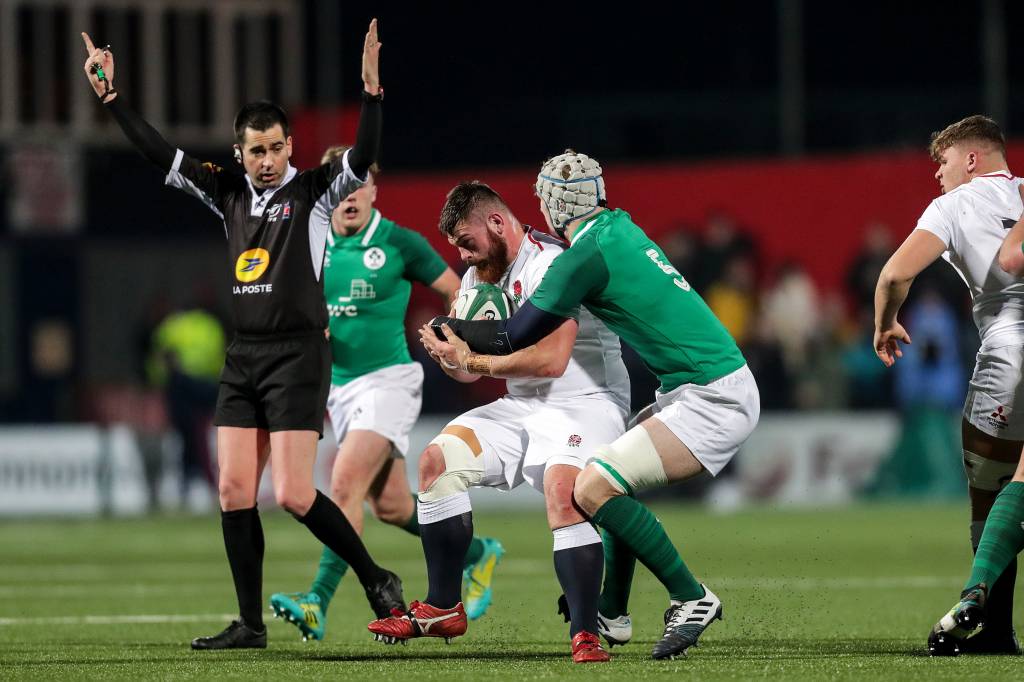 In terms of how he has developed the defensive side of the Ireland U-20s’ game, Campbell acknowledged that the presence of Andy Farrell, his counterpart in the Ireland senior set-up, at previous training camps gave them an ideal platform to work off heading into the U-20 Six Nations.

“Andy was in some of our sessions. We’ve great cohesion with the senior side. Without giving too much away, we’re using the same kind of technical knowledge from him. That’s certainly given us a good basis to work from. It’s been really enjoyable. Really enjoyed being back in the national set-up,” he admitted.

“Noel and Amby (Ambrose Conboy) have done a really good job in building some cohesion in the set-up. There is a really good spirit. The boys really came together and that’s one of the reasons we have been successful against England. I think we had a bit more cohesion – there was a lot of spirit in the team.

“That was developed in the four-day camp that we had in Fota (Island). The boys really came together and that is one of the reasons why we were so successful. Against England I think we had a bit more cohesion, I think there was a lot of spirit within the team, the backroom staff and the first fifteen.”

As a consequence of that four-try performance and result in the first round, Ireland’s tails are up heading into their Netherdale clash with Scotland. The post-match video session showed that Ireland are in good fettle at present, but Campbell stressed there is more to come from this group.