Ireland Women’s scrum coach Mike Ross admits that last Friday’s comprehensive 51-7 defeat to England at Energia Park was a difficult one to take.

Despite an encouraging start to their Six Nations opener in Donnybrook, the Ireland Women suffered an eight-try beating at the hands of the newly-professional Red Roses. During his own illustrious career with Leinster and Ireland, former prop Ross encountered his fair share of highs and lows.

The Cork native amassed 64 international caps over a seven-year period in green, playing a key role in the back-to-back Six Nations Championship successes of 2014 and 2015. He also had some bad days on the international stage and a particularly harrowing loss sprung to mind in the aftermath of Friday night’s game.

“It did sting because we had really built up towards that game. We trained well during the week but ultimately England just out-classed us. We didn’t match their physicality. They were offloading out of tackles, which was brilliant at times and that really hurt us,” admitted Ross, speaking at the team hotel in Dublin.

“But at the same time, and I said it to the girls afterwards, I was in an Irish side that went down to New Zealand in 2012 and lost 60-0. Here we are a handful of years later and we are beating them, so don’t get too downhearted about that.”

In contrast to England, head coach Adam Griggs fielded a relatively inexperienced Ireland squad on the night. Whereas the visitors had two Test centurions in player-of-the-match Katy Daley-Mclean and captain Sarah Hunter, the majority of the Irish matchday 23 – including new caps Anne-Marie O’Hora, Linda Djougang and Kathryn Dane – are still finding their feet at this level.

“I think we are progressing but the other thing is, a lot of the women have under 10 caps. I mean, Claire Molloy has more caps (65) than the rest of the squad put together. There was a huge churn in personnel after the last World Cup and we have to try and replace that experience. Sometimes that is going to hurt and sometimes you have to learn on the job.

“Sene Naoupu, if you take Ailsa (Hughes) out, she has more caps (29) than the rest of the back-line put together. It’s a harsh environment, international rugby. You are always learning and I think ultimately they will be the better for it.”

They have an immediate opportunity to bounce back at Scotstoun Stadium this Friday when Scotland, who triumphed 15-12 at Donnybrook last year, host the girls in green in the west end of Glasgow. The Scottish side are seeking a positive response to their own 28-7 first round defeat to Italy, but Ross is quietly confident of an Irish victory.

“Scotland lost unexpectedly at home to Italy last week, so that’s something I wasn’t expecting to look at. I haven’t got my hands on the game yet. but I need to have a look at it. Definitely want to get back on track and get a win over there. We’ll both be hurting after our respective results, but I hope we’ll want it more.” 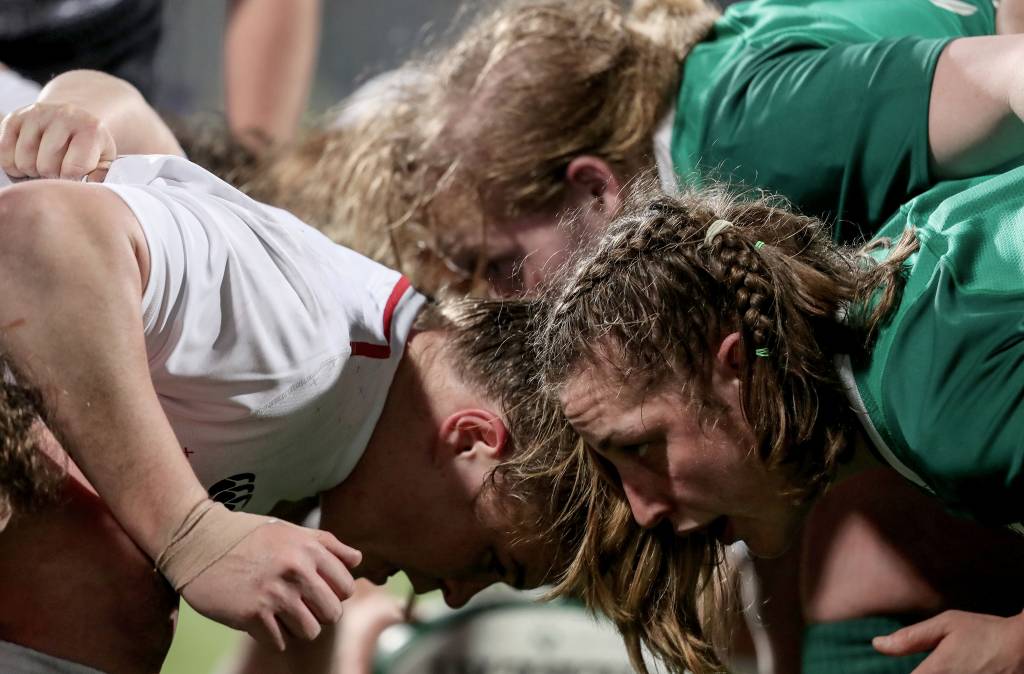 One of the major plus points to emerge from the opening weekend of the Championship was how well the Irish scrum coped in the face of relentless English pressure. Ross is quick to acknowledge the foundations that were built by the previous coaching team, while he is also keen to empower the pack to take charge once they cross the white line.

“I think we have taken some of the good work that was done beforehand and built upon it. We have an attitude with the scrum that it’s not just a method to reset and get the ball back into play. It’s a way you can stamp your physical dominance upon the opponent and use it as a weapon. That’s really what we have driven the standards towards.

“I’ll always sleep well when the scrum goes well. We have worked on it for a while now and the girls really buy into what I want to do. I am kinda handing over ownership to them now to drive the standards and I’m just keeping an eye on it. I have been pretty pleased with how that is going but at the same time, losing 51-7 to England at home is not the result that we wanted.”

A former student of St. Colman’s College in Fermoy, the 39-year-old Ross has featured in the front rows of Munster, Harlequins and Leinster at provincial and club level. His 2006 transfer to ‘Quins offered him a new lease of life and led to his eventual move back to these shores three years later.

Working under the likes of current Ireland scrum coach Greg Feek and Leinster scrum coach John Fogarty gave him the perfect education in scrum coaching, with Ross noting: “It’s kinda different to coaching lads. There have been a few adjustments around that but they are a pleasure to coach. Honestly, they are. They are like sponges. They soak up everything I tell them and keep asking me more questions.

“At the start I was actually going into the scrum myself, which Lindsay Peat really enjoyed! It’s just about being able to translate what you did instinctively as a player into it as a coach. Luckily enough I had some good coaches throughout my career who helped me with that, like Greg Feek and John Fogarty. I have taken bits from what each one of them have given me and used my own interpretation.”