The Ireland Women ticked off some ground-breaking achievements with their highest finish yet in a World Series tournament, Amee-Leigh Murphy Crowe’s nine tries putting her top of the try scoring charts, and captain Lucy Mulhall and Eve Higgins’ selection on the HSBC Sydney Sevens Dream Team alongside players from title winners New Zealand and Australia. 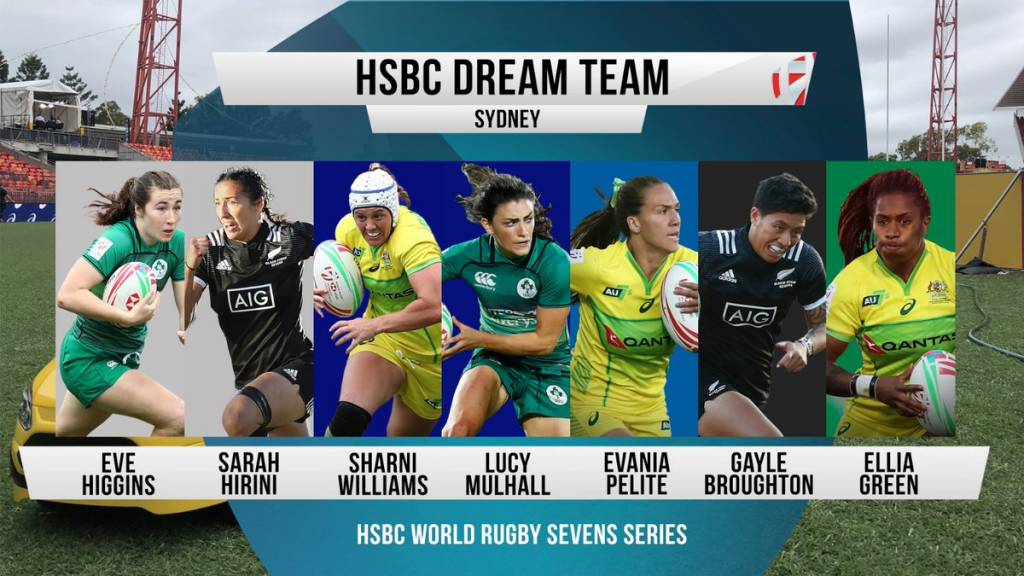 Of note too was Beibhinn Parsons’ try-scoring bow in an Ireland senior Sevens jersey, with the 17-year-old from Ballinasloe and Cork’s Emily Lane (20) both enjoying World Series debuts to remember. They have both come through the IRFU Under-18 Sevens pathway along with fellow 20-year-olds Anna McGann and Brittany Hogan, who also played their part in Ireland’s historic run in Sydney.

Having gone undefeated to top Pool B on the opening day at Spotless Stadium, Ireland put in a dominant display on Saturday to overcome European rivals Spain 22-7 in the Cup quarter-final, which set up a semi-final showdown with tournament hosts and reigning World Series champions Australia. 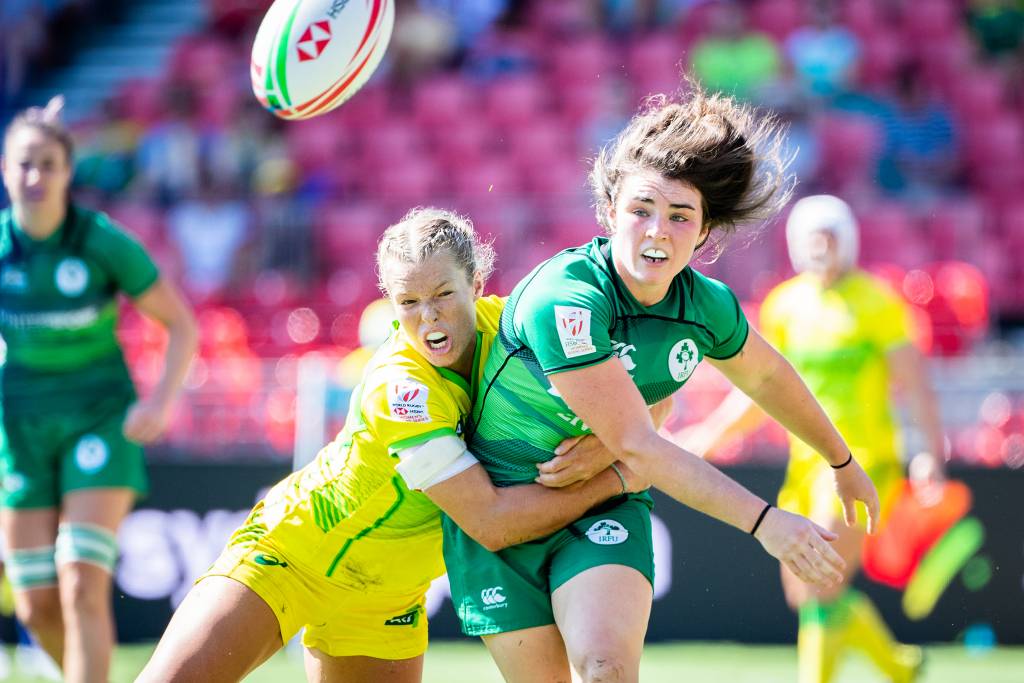 Australian speedster Ellia Green was their match winner as her hat-trick helped the hosts win 24-12 against Ireland. With McGann, Higgins and Hannah Tyrrell taking the ball hard to the line, the girls in green made good early progress, but a costly penalty at the breakdown led to a fast-paced breakout and Green went over untouched in the third minute.

It was a quick-fire brace from Green as Australia, having won the restart, burst into a 14-0 lead. Higgins and Deirbhile Nic a Bhaird’s strong defence prevented a further try until replacement Emma Tonegato was released in just enough space to get over to the right of the posts despite Murphy Crowe’s last-ditch tackle.

However, Ireland built a good deal of momentum early in the second half with a Higgins turnover penalty launching them forward. Australia held out until quick passes from Tyrrell and Nic a Bhaird released Murphy Crowe to score wide on the right. Some high-quality footwork from Higgins should have led to another score, but Australia’s Lily Dick won a relieving penalty.

Nonetheless, Ireland kept the Australians pinned back in their own 22 and from another penalty, Nic a Bhaird tapped quickly and linked with Mulhall and Tyrrell to send Murphy Crowe over on the right once again. Mulhall’s well-struck conversion cut the gap to 19-12 with two-and-a-half minutes remaining, and despite some subsequent Irish pressure in attack, Green came to Australia’s rescue with a penalty-winning counter-ruck and then a long-range clinching try. 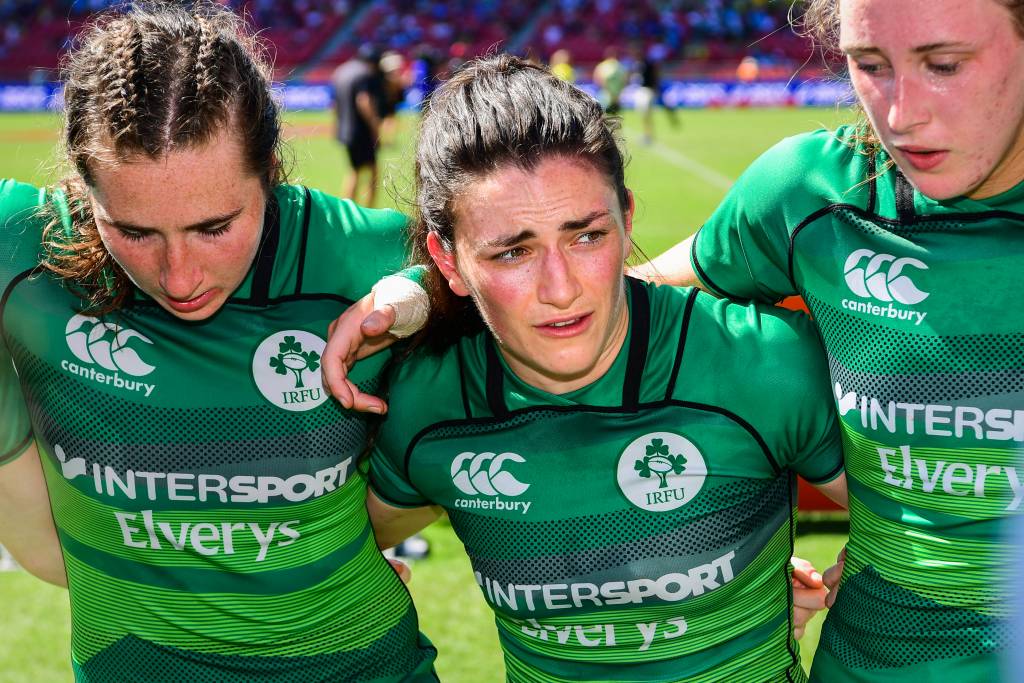 That left Ireland playing for third place against the USA who, despite fumbling the kick-off from Mulhall, were able to release Kris Thomas who fended off both Parsons and Hogan to touch down after just 24 seconds. With Lane in at scrum half, Ireland probed for openings but were starved of territory and the Americans were getting the better of the breakdown battle.

Five minutes in, the powerful Kristi Kirshe found a gap in midfield to break through for the USA’s second try, and a scrum won against the head led to Thomas completing her brace just before half-time. Trailing 19-0 at the interval, Ireland immediately upped the ante with Higgins having an impact off the bench and Murphy Crowe burning off two defenders for a try within 30 seconds of the restart. 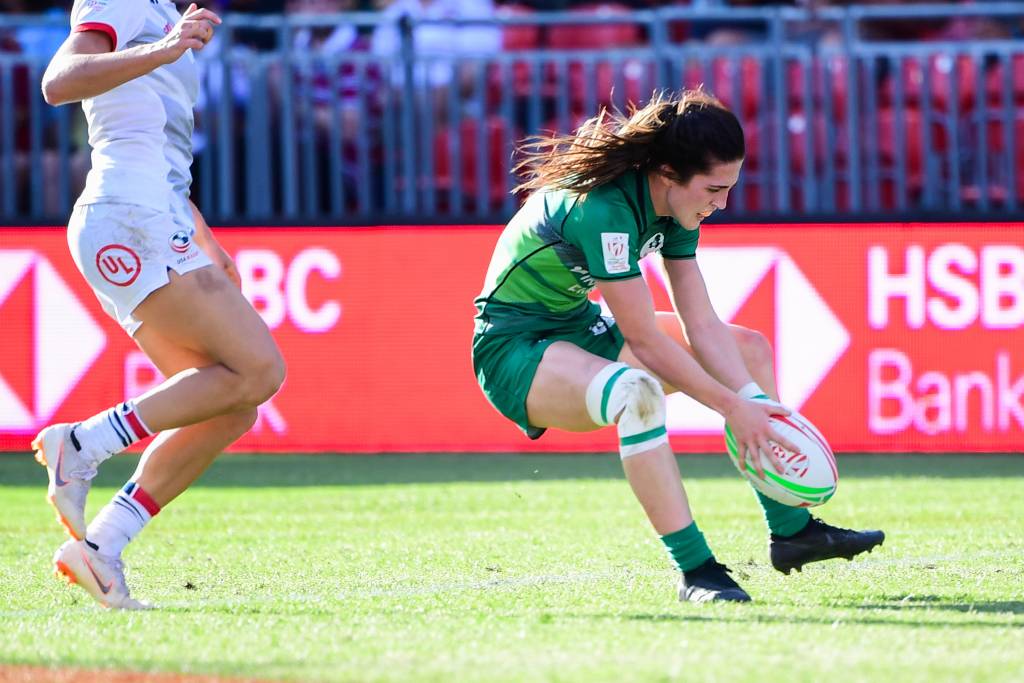 After Mulhall’s conversion attempt dropped just short, Higgins dusted herself off after a big collision with Jordan Gray-Matyas to run in one of the tries of the tournament. The 19-year-old Railway Union out-half sidestepped into space from her own 10-metre line, evaded a diving tackle and raced clear of both Nicole Heavirland and Cheta Emba to cross near the left corner.

With their lead cut to nine points, the US Eagles bounced back in impressive fashion with Gray-Matyas’ intelligent offload out of a tackle sending Kirshe up the left touchline and rounding in for her second try of the game. Ireland had too much ground to make up with just under two minutes remaining, closing out the Sydney leg with a 26-10 defeat.

Mulhall and her team-mates will still take a huge amount from the performances over the weekend which gained them 14 World Series points, moving them above Russia into sixth place at the halfway stage of the season. The squad will return home to their base on Lansdowne Road and begin planning for the next round in Kitakyushu, Japan on April 20-21.

For more information on the Sydney 7s and the full results and standings, visit the tournament website here. Information on the HSBC World Rugby Sevens Series, including where to watch, is available here.