The Ireland Women’s Sevens team laid down a couple of big markers on the opening day of the Sydney 7s tournament, finishing top of their pool for the first time in HSBC World Rugby Women’s Sevens Series history with a record eight-point haul.

It is the first time Anthony Eddy’s side have gone through the pool stages undefeated, as an opening round draw with Russia (7-7) was followed by only Ireland’s second ever win over Canada (15-14), who are currently second in the World Series standings, and their sixth in-a-row against a fast-finishing Fiji side (24-19).

Ireland’s record try scorer Amee-Leigh Murphy Crowe topped the charts with a four-try haul, including a hat-trick against the Fijians, while there were World Series debuts for 20-year-old scrum half Emily Lane (pictured below) and Ballinasloe teenager Beibhinn Parsons, who fittingly marked her first cap with a smartly-finished score in the Fiji game.

As Pool B winners, the unbeaten girls in green will face familiar rivals Spain, the best third-place finishers, in a quarter-final clash at Sydney’s Spotless Stadium tomorrow (kick-off 2.34am Irish time/1.34pm local time). There will be live streaming via the World Rugby website. 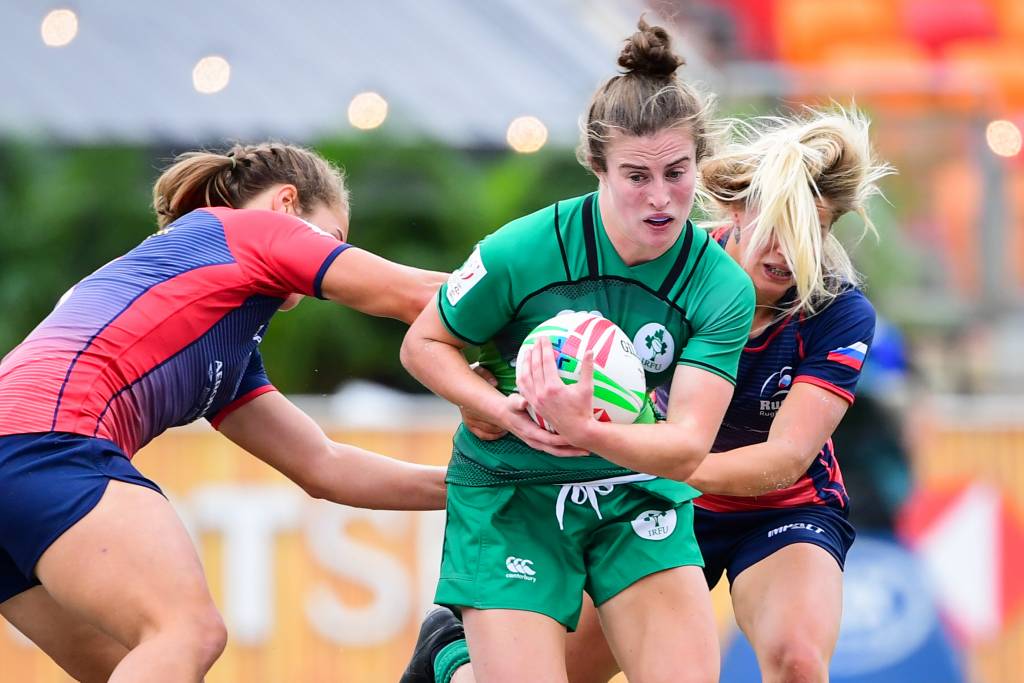 Louise Galvin tapped back Lucy Mulhall’s kick-off against Russia to provide go-forward ball for Audrey O’Flynn, but defences were on top in a cagey and scoreless first half. Eve Higgins’ thumping tackle on Elena Zdrokova summed up Ireland’s intent, while Lane had a couple of strong ground-gaining runs along with the ever-industrious Deirbhile Nic a Bhaird.

A strike move off a lineout in the Russian 22 almost brought a late try just before half-time, but Russian captain Alena Mikhaltsova hauled down Higgins five metres short. Both sides were leaking penalties at the breakdown in a ferocious scrap for possession, and that fight continued early in the second period with Nic a Bhaird and Murphy Crowe both getting over the ball to win penalties.

The breakthrough finally came in the 12th minute when good work on the ball by Nic a Bhaird and replacement Aoife Doyle brought Ireland past halfway, and Galvin’s scooped pass out to the right sent Higgins darting clear from 35 metres out with Baizat Khamidova unable to catch her.

However, despite Mulhall’s well-struck conversion, Russia secured possession from the restart and Arina Bystrova’s clever dummy and impressive burst of pace took her clear for a last-minute levelling try. Murphy Crowe got back to deny Mikhaltsova a match-winning score from a kick through, dotting down to confirm a share of the spoils in this European derby.

The Irish defence came under lots of early pressure in their next game against Canada, who looked in excellent form after running out 36-12 winners over Fiji in their opening game.

Canadian captain Ghislaine Landry beat tackles from Murphy Crowe and Galvin to open the scoring with a run-in from halfway after just two minutes. A soft second concession saw Irish errors give Canada a penalty in the 22 which was quickly taken and Brittany Benn fed Breanne Nicholas to power over behind the posts for a 14-0 lead. 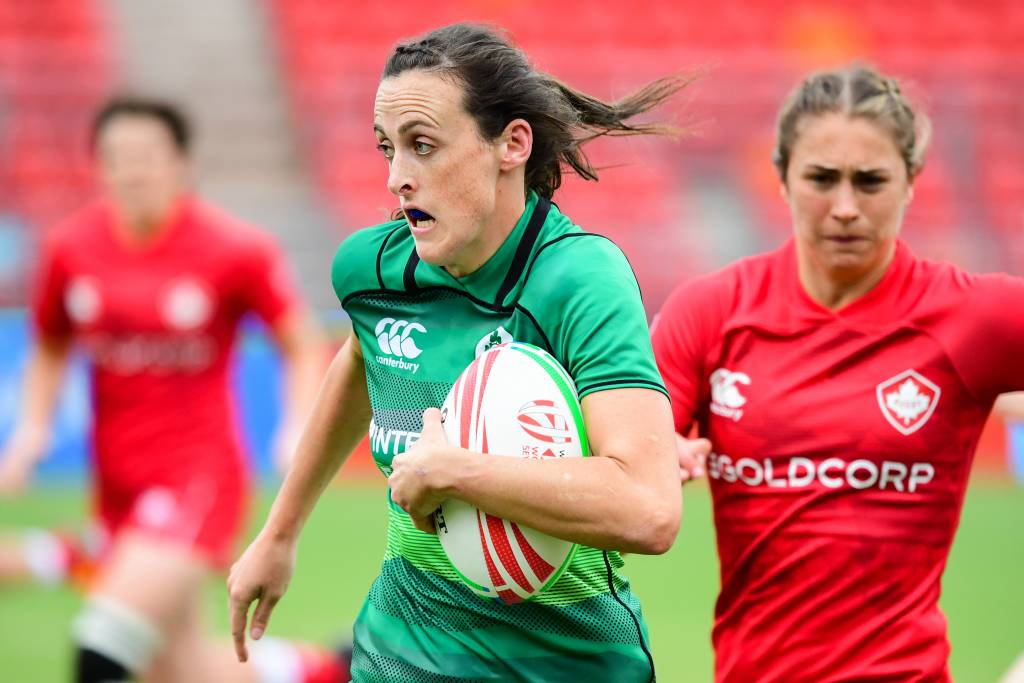 A terrific individual try from Hannah Tyrrell crucially gave Ireland the swift response they needed. The rangy winger backed herself from her own 10-metre line as three Canadian chasers failed to keep up with her. The try went unconverted and they added another past the half-time hooter, running hard off penalties with Tyrrell and Nic a Bhaird punching through before Mulhall fed Galvin from a close-in ruck to score out on the left.

With the deficit suddenly cut to 14-10, Ireland held the momentum at the interval and they went desperately close to nabbing a third consecutive try. Mulhall broke the defensive line and looped an offload to the supporting Murphy Crowe who carried a defender with her over the line. Unfortunately, referee Hollie Davidson ruled out it for a marginal forward pass.

The score did come a couple of phases later, the green-shirted defence hounding Julia Greenshields into a hurried clearance kick from behind her own try-line. The resulting lineout was won and possession moved from the left wing out to the right where Tyrrell ran hard and delivered a well-timed pass for Murphy Crowe to finish in the corner past the covering Greenshields.

Cork youngster Lane was showing her distribution skills from scrum half, and Ireland had the Canadians contained in their own half for much for the second half until a late breakout. It took some dogged defending to hold on for the one-point victory – Nic a Bhaird and Anna McGann both stood out for key involvements in the final few phases – as Eddy’s charges headed into round three with a one-point lead at the top of the pool table.

However, Fiji stung Ireland with a try straight from the kick-off as the receiving Ana Maria Roqica took off from her own 10-metre line and went over untouched with just 13 seconds on the clock. Murphy Crowe levelled inside two minutes, trailing Nic a Bhaird’s jinking break from halfway to score and take her all-time series haul to 60 tries.

Ireland hit the Fijians on the double with a brace of key tries in the lead up to half-time. Firstly, a couple of penalties set up a lineout opportunity in the left corner and a neat line of passes out to the right supplied the 17-year-old Parsons to open her series account with a textbook finish from a few metres out. Then it was Murphy Crowe’s turn to slip away from an attempted tackle and scoot in under the posts for a seven-pointer. 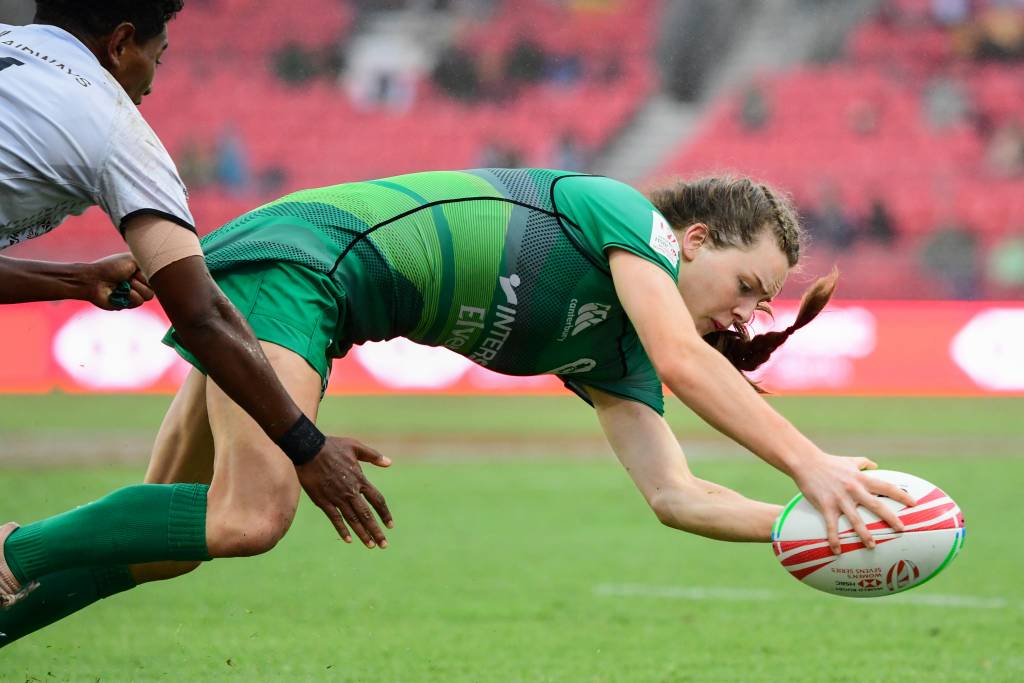 Leading 17-5 at the turnaround, Ireland continued to revel in the wet conditions as McGann carried past halfway, Higgins dived on a loose ball to retain possession and Murphy Crowe fixed a couple of defenders and took off through the gap to complete her hat-trick from 45 metres out. Mulhall converted from straight in front and all of those points were needed in the end as Fiji came back strongly.

The South Sea Islanders made it a nervy finish with Ana Maria Naimasi spinning out a tackle and surging clear for their second try, and the third arrived in the twelfth minute through replacement Raijieli Daveua who profited from an interception deep in their own 22. Fiji’s indiscipline cost them, though, as Daveua was sent-off in the final seconds for a swinging arm to Galvin’s head, leaving Ireland to wrap up the win.