Three teams in the lower half of All-Ireland League Division 1A all won on Saturday as UCC and Dublin University claimed the scalps of Lansdowne and Clontarf respectively. It was also a big day for bottom side Terenure College who swept past UCD for their first victory since October.

Cork Constitution took a big step towards securing a home All-Ireland League Division 1A semi-final with a five-try 31-5 victory over struggling Young Munster at Tom Clifford Park on Saturday afternoon.

With defending champions Lansdowne and Clontarf both losing yesterday, Cork Con grasped the opportunity to move eight points clear at the top of the table, while Munsters, whose only try from backs coach Derek Corcoran opened the scoring, are now in the bottom two after being leapfrogged by resurgent UCC.

At a wet and windy Greenfields, Tipperary youngster Alan Tynan’s expertly-weighted grubber kick put Corcoran over, but it was a short-lived lead as Con’s influential number 8 Luke Cahill provided a neat offload for winger JJ O’Neill to run in the levelling try, converted by Aidan Moynihan for a 7-5 scoreline. 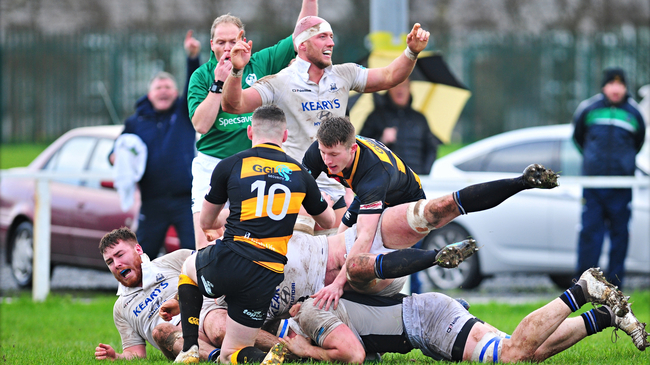 The visitors built a 12-5 half-time lead with a well-worked lineout maul setting up powerful lock Conor Kindregan for their second try on the half hour mark. The strong wind foiled Moynihan’s conversion attempt. Despite losing Liam O’Connor and Kevin O’Byrne to Munster call-ups, the strength of Con’s pack was shown by a clutch of first half scrum penalties won by their pack.

Winger Rob Jermyn’s footwork and pace off the mark saw him beat two defenders at close quarters for a 45th-minute converted try, extending Con’s advantage to 14 points. The Cookies had some decent spells across the 80 minutes but the sin-binning of centre Jack Harrington was ruthlessly punished with the visitors’ bonus point score from replacement Greg Higgins.

They added some further gloss as O’Neill completed his brace by collecting out-half Moynihan’s cross-field kick to register his sixth try of the league campaign. Seven of Con’s players will now play for Ireland in the Dalriada Cup series against Scotland over the next fortnight, while Munsters, who have Dan Walsh in that Ireland Club XV squad, must bounce back away to UCD in three weeks’ time.

A ‘Tarf penalty try with a quarter of an hour remaining had Trinity staring down the barrel of their sixth league defeat, but young out-half Michael O’Kennedy kicked them back in front with a 77th minute penalty before back rower O’Riordan crashed in beside the posts to seal a famous win for Tony Smeeth’s side.

Despite living off limited position early on, Clontarf went close to breaking the deadlock in the seventh minute when Jack Power’s break took them close before Under-20 hooker Declan Adamson unfortunately knocked on Ben Reilly’s pass out wide. ‘Tarf’s own defence was resolute until the 21st minute when Ireland Under-20 prospect Giuseppe Coyne touched down for Trinity via Rowan Osborne’s inviting offload.

O’Kennedy’s conversion was followed by a swift response from the north Dubliners, as Peter Hoy released Matt D’Arcy on the left wing and the tall centre jinked inside a covering tackle for a smartly-taken try – his fifth of the season. David Joyce, a former Trinity player, leveled with the conversion and ‘Tarf added a second converted try on the stroke of half-time.

Although they coughed up a turnover penalty, there was just enough time for a final attack from Andy Wood’s men and James McKeown’s incisive carry on the right set up Adamson for a breakaway try – his second score in as many games. Joyce’s reliable boot made it 14-7 before a pulsating third quarter saw Trinity claim a 19-14 lead.

Collecting a short pass from O’Kennedy, centre Philip Murphy squeezed through a small gap for the hosts’ second converted try. They then capitalised on Cormac Daly’s 53rd-minute sin-binning as a lineout maul allowed hooker Dan Sheehan to peel away and score in the left corner. Joyce missed a penalty into the wind before he twice kicked penalties to touch, setting up a rolling maul which led to referee Leo Colgan awarding ‘Tarf a penalty try.

However, that concession inspired Trinity to lift their game even more. O’Kennedy’s successful penalty was the jolt of energy they needed, although Con Kelly’s missed penalty at the other end was a considerable let-off. O’Riordan had the final say, applying the finishing to a multi-phase attack with O’Kennedy’s conversion taking away the losing bonus point from ‘Tarf.

It was a brilliant response from Trinity to their 66-33 hammering by Lansdowne last week, with yesterday’s result lifting them up two places in the table to fifth. They have four points to make up on fourth-placed Garryowen, with Smeeth’s charges facing crucial clashes with two teams below them, UCC and Shannon, next month.

Terenure College gave their battle against top-flight relegation a huge lift with a barnstorming 49-21 win over UCD at Lakelands Park where they scored seven tries.

Two of them were run in by Ireland head coach Joe Schmidt’s son Tim whose form with ‘Nure’s seconds team earned him a start on the left wing. The game was played at a viciously high tempo with both scrum halves, Jamie Glynn and Paddy Patterson, continually probing for openings and covering a huge amount of ground.

Two tries in the opening ten minutes had UCD 14-10 to the good, with Leinster Academy centre Gavin Mullin’s snappy score supplemented by a penalty try. However, Terenure showed their powers of recovery with a superb run of 24 points without reply up to half-time.

Mullin’s Academy colleague Jack Aungier got his name on the scoresheet as the ‘Nure pack began to make inroads and provide a strong platform off set piece ball. With out-half James Thornton also kicking well, the division’s bottom side were soon applying scoreboard pressure as the momentum swung in their favour.

A well-struck Thornton penalty and tries from pacy Ireland Sevens international Schmidt and replacement Sam Dardis, either side of half-time, had James Blaney’s men almost out of sight as they went about ending their sixth-match losing streak.

A Liam Hyland try from close range raised UCD’s hopes of a comeback at 39-21 down, but Terenure had more in the tank and they topped off only their second victory of the campaign with 10 more points. The burgeoning centre partnership of Adam La Grue and Stephen O’Neill produced two tries, while Schmidt and Dardis both claimed braces as ‘Nure moved within five points of Young Munster at the foot of the table.

Young out-half James Taylor produced a man-of-the-match performance to pilot UCC to a tremendous 25-22 triumph over defending league champions Lansdowne at the Mardyke.

The Cork students dug deep in the second half to maintain the three-point advantage they had determinedly built up in the first half. Taylor contributed half of their points during the opening 40 minutes, kicking two conversions and two penalties as he took his season’s haul to 88 points.

An eighth-minute penalty from Taylor handed UCC the early initiative, the hosts close to full-strength as they looked to avenge last month’s 31-15 loss at Lansdowne. The headquarters club had put 66 points on Dublin University at home last week and their impressive ability to convert pressure into points saw them bag three tries by the 33-minute mark in Cork.

The Lansdowne forwards forced a penalty try on the quarter hour, and UCC winger Matt Bowen’s try from a Taylor delivery was cancelled out by back-to-back scores from lock Willie Earle in the corner and in-form winger Daniel McEvoy, who crossed for his seventh try of the campaign which makes him the division’s leading try scorer.

However, Corkman Scott Deasy missed both conversions in the windy conditions and his opposite number Taylor closed the gap to 17-13 with a 37th minute penalty. It got even better for Brian Walsh’s charges just before the interval when replacement Brian O’Mahony found enough of a gap to squeeze over with Taylor adding the extras for a sudden 20-17 advantage.

Defences were on top in the second half of what was a very entertaining tussle between two clubs at opposite ends of the table. UCC have belied their lowly position in the last two rounds, claiming the scalps of both Garryowen and Lansdowne with winger Michael Clune’s 60th-minute try proving enough to get them over the finish line this afternoon.

Promising Leinster Academy hooker Ronan Kelleher hammered back with a forwards-inspired try with less than ten minutes remaining, but Walsh’s young side, aided by the leadership of captain Daire Feeney, Cian Bohane and John Poland, saw out the result in defiant fashion to climb above Young Munster and, crucially, out of the bottom two.

Stung by their home defeat to UCC last week, the Light Blues ran in three first half tries on Thomond Park’s main pitch, and added two more after the break before replacement Ronan Coffey answered back with a late consolation try for a well-beaten Shannon team.

Only a point separated the sides in the Division 1A table before kick-off, with Garryowen determined to hold onto fourth spot. The wet conditions made ball retention and high fielding difficult, but the visitors managed to pin Shannon back from the start, and after the forwards had sucked in the defence, the ball was fed wide for Coombes to go over in the right corner with seven minutes gone.

Centre Peadar Collins missed the difficult conversion but nailed a 19th-minute penalty as Garryowen remained in control despite losing Munster winger Alex Wootton to injury. In-form winger Eathon Moloney tried to inspire the Shannon attack, but a costly penalty led to Diarmuid Barron mauling over for the Light Blues’ second try in the 31st minute.

Another handling error from Shannon, who were feeling the pressure from the Garryowen defence, led to the concession of a third try. The lineout drive was well executed once again as lock Kevin Seymour grounded the ball on this occasion with Collins narrowly missing the conversion at 18-0.

The bonus point was secured ten minutes into the second half, with the Shannon defence stretched by Rob Guerin’s snappy passing and the gain-line busting of his team-mates, and Coombes was released to complete his brace in the left corner.

By that stage Munster hooker Mike Sherry had come on for Garryowen, who suffered their first real setback when prop Andy Keating saw yellow for a 55th-minute high tackle on Jade Kriel.

Off-colour Shannon, who had lost a thriller 30-29 at Dooradoyle last month, gave away possession with a blocked kick and Garryowen turned the possession into their fifth and final try as Collins took his own tally to eight points. Robbie Deegan, a lively replacement with his tackle-breaking runs, had Coffey up in support to finish off Shannon’s try, four minutes from the end.