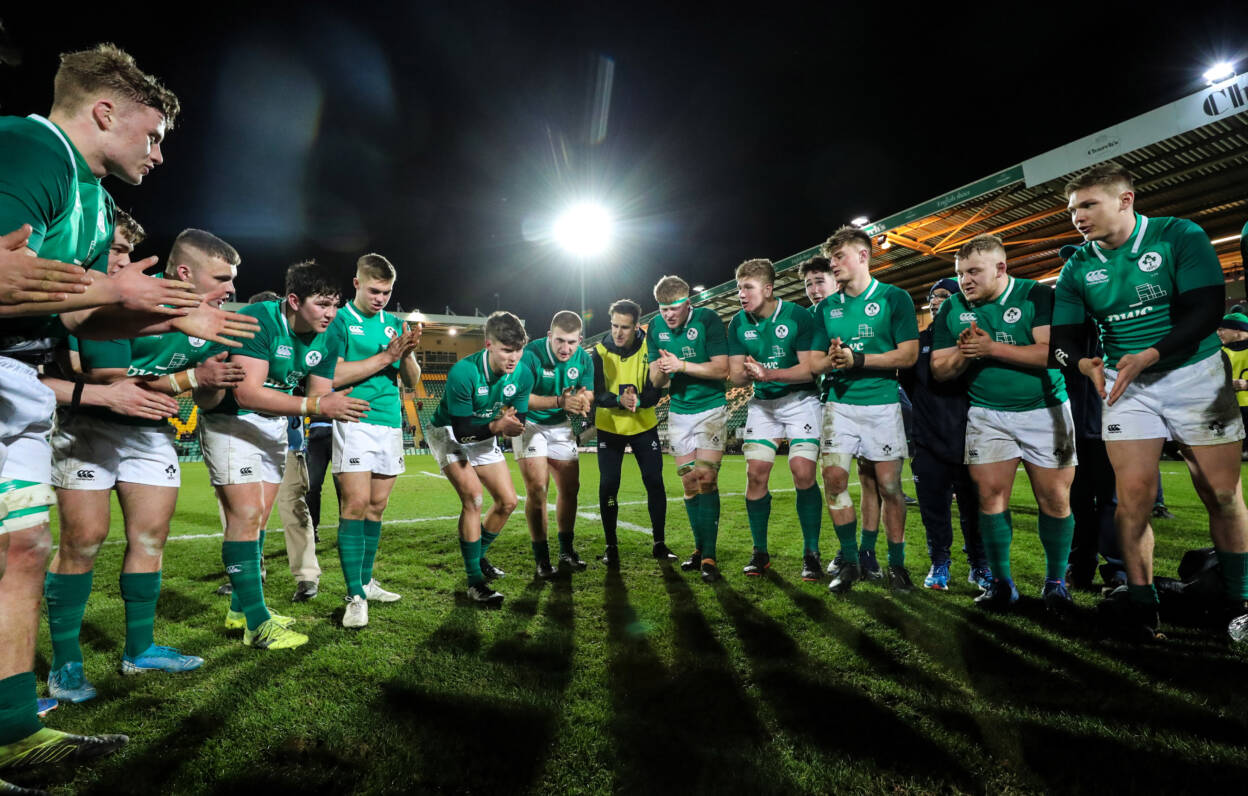 In different ways, each of the six tries scored by the Ireland Under-20s in Friday night’s victory over England at Franklin’s Gardens demonstrated the ambition and skillset of this group of players under the management of Noel McNamara, Colm Tucker and Kieran Campbell.

In their first away challenge of the Under-20 Six Nations, Ireland impressively enhanced their Championship credentials with a dominant six-try victory in Northampton, as Alex Soroka, Thomas Ahern (2), Hayden Hyde, Ethan McIlroy and Max O’Reilly all crossed to claim Triple Crown glory.

Following home wins over Scotland and Wales, this was another big step for McNamara’s class of 2020 as they recovered from the concession of an early try to stamp their mark all over the contest with a brand of attacking, free-flowing rugby that was an absolute joy to watch.

Ireland, led by captain David McCann and a dynamic pack, had the bonus-point wrapped up before the break and although England landed a couple of blows of their own in the second half, the visitors maintained their composure to stay ahead of the game through substitute O’Reilly and then second row Ahern.

“The boys knew that if they performed they’d be right in it and that was something that was referenced a number of times throughout the course of the week,” McNamara told IrishRugby.ie afterwards.

“We’ve got to give the players credit for how they started in particular and obviously there was a setback pretty early when we conceded that try but there are plenty of positives for us in terms of our performance and equally a few areas we’ll need to develop and grow before we face Italy in Irish Independent Park.”

Of the six tries, Hyde’s first-half score, as Sean O’Brien showed superb awareness and dexterity to keep the ball alive and then winger McIlroy produced an outrageous offload out of the tackle, stood out for the Ireland Head Coach.

“I think at times we made a bit of hard work of it, particularly when we got into score zone,” McNamara continued.

“We probably didn’t have the tempo we really wanted in there at times but a couple of the tries the lads scored, I think Hayden Hyde’s in particular was the pick of the bunch with Sean O’Brien keeping the ball alive and Ethan McIlroy with a beautiful offside back inside as well.

“I think it just demonstrates the ambition the boys have to play. There is a lot of ambition in terms of how we play and we’re prepared to take risks and they were certainly rewarded for that in the first half.”

Ireland will reconvene in Dublin this week for another training session against the senior team at Energia Park, which will again serve as crucial preparation for that third and final home game against Italy in Cork on Friday, March 6th (Kick off 7.15pm and tickets are available to buy here).

With 15 points from a possible 15 and sitting top of the Six Nations table after three rounds, Ireland are in a strong position heading into the final two games against Italy and France but McNamara and the players know there is still a lot of work to do.

“It is different coming away from home and England have a very proud record here,” McNamara added.

For us it’s a huge positive and another step in the Championship. There is obviously the Triple Crown which we’ve only achieved twice at this level so I think the lads can take some satisfaction from that.

“Equally, there is a feeling that there is a lot more to do. Sights will firmly focus on the challenge that awaits us and that’s our last home game in Irish Independent Park, which has been a tremendous home for us this season again.

“We’re hoping for a big crowd to get out behind the boys so we can really put on a performance there in two weeks.”