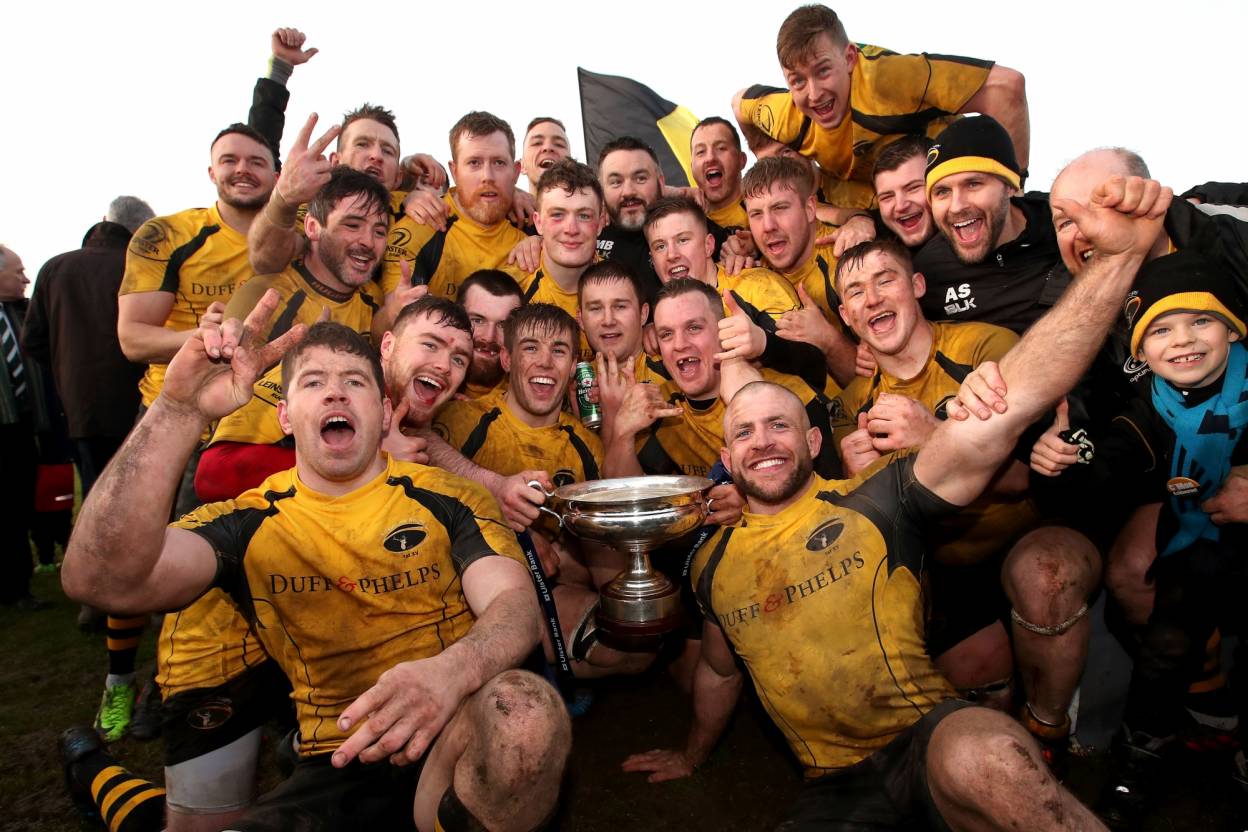 Ashbourne are the All-Ireland Junior Cup champions for the third time in-a-row after a 16-11 final win over Enniscorthy at Edenderry RFC. The historic victory also moves them alongside Tullamore at the top of all-time list in the competition with three titles.

It was a hard-fought final as Enniscorthy scored 11 unanswered points and the conditions added to the final quarter drama. Ultimately, Mark Rooney’s early try and the assured kicking of scrum half and captain Gavin Kennedy helped Ashbourne claim a unique hat-trick of All-Ireland Junior Cup crowns.

“That was outstanding from the lads,” said Ashbourne head coach Scott Broughton afterwards. “Three-in-a-row sounds nice, but it was hard work out there. We got off to a good start but it was fairly attritional in the second half.”

Ashbourne bossed the first 20 minutes and opened the scoring when Enniscorthy failed to deal with Kennedy’s testing grubber kick. Centre Rooney was on hand to capitalise with Kennedy converting and kicking two penalties to push the defending champions into a 13-0 lead.

The Meath men were proving hard to breach. A decent maul platform and some hard running saw Enniscorthy gain better territory and the breakthrough finally came moments before half-time. Daniel Pim’s skip pass helped beat the cover and the ball made its way to winger David O’Dwyer, who managed to muscle over in the left corner with the help of Ivan Jacob and Richard Dunne.

Enniscorthy went into the dressing rooms trailing 13-5 at the break and looked like they had turned the game with back-to-back penalties from out-half Ivan Poole. Suddenly, Ashbourne’s lead was down to just two points and they had winger Colm Craigie in the sin-bin for a tip tackle.

Broughton added: “I think we controlled things reasonably well when we had the ball. We’ve got experience and big ball carriers to help us through those final moments.”

Ashbourne duly engineered another kick at goal for Kennedy to maintain his 100% return from the tee. With 10 minutes left, they were now defending their lead against worsening conditions and a massive Enniscorthy onslaught.

A core group of Ashbourne’s squad had forged their winning know-how in the 2017 and 2018 All-Ireland Junior Cup finals. It was a thrilling finish, but they were not to be denied as they defeated ‘Scorthy. the current Leinster League Division 1A leaders, in a repeat of the 2017 decider.