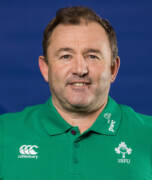 Richie Murphy was appointed Head Coach of the Ireland U20s in 2021 having worked as Skills & Kicking Coach with the Men’s team since 2013.

Richie was co-opted onto the Ireland Coaching Team in 2013 by Joe Schmidt while an assistant coach at Leinster Rugby.

To date he has played a key role in the sustained success of the Ireland national team including Six Nations Championships in 2013 and 2014, a Six Nations Grand Slam in 2018 and a number of Irish Rugby firsts – victories over New Zealand (2016 & 2018), a first Test victory in South Africa (2016) and a series win over Australia (2018).

Richie was appointed full-time Senior Skills & Kicking Coach with the Ireland national team in August 2015 and was part of the coaching team at both the 2015 and 2019 Rugby World Cups.  Richie’s national role includes working directly with all players of national interest to develop their tactical and technical capabilities.

Richie has a proven track record in elite player development helping players progress from underage representative rugby through to senior national honours.  He has been responsible for the successful delivery of several talent development programmes at both a provincial and national level.

Richie Murphy, who has been the Ireland skills & kicking coach since 2013, will take over as Ireland Under-20 head…
20th Feb 2021
Watch

In a new Coach's Corner series with the Ireland Coaching Team, Richie Murphy sits down with Irish Rugby TV in…