Josh van der Flier and Neve Jones have been chosen as the Guinness Rugby Writers of Ireland Men’s and Women’s Players of the Year respectively.

Praised for their consistent performances throughout the 2021/22 season, the Ireland duo received their awards at this evening’s ceremony at the Guinness Storehouse in Dublin.

Van der Flier was one of the standout players as the Ireland Men’s team claimed the Triple Crown in March, along with a historic series win on the summer tour of New Zealand.

The 29-year-old Wicklow man also turned in some brilliant performances for Leinster, both domestically in the United Rugby Championship and on the European stage. 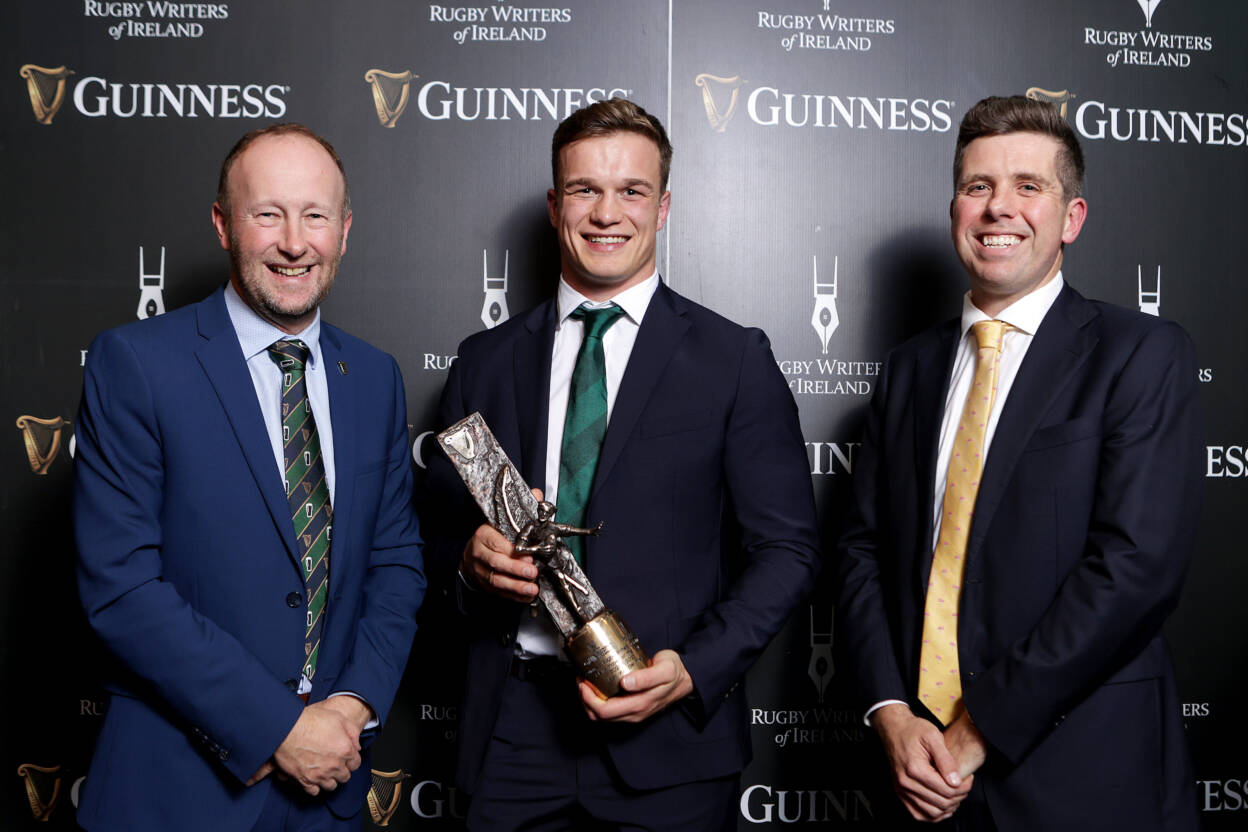 “I am very proud to have been voted the Guinness Rugby Writers of Ireland Men’s Player of the Year,” said the Leinster and Ireland flanker.

“On a personal and professional level, 2022 has been incredibly special for me and it was wonderful to have our amazing supporters backing us throughout the season.

“All my team-mates at Leinster and Ireland were equally incredible last season and I definitely would not be picking up this award without their help.

“I hope that we can keep all improving over the next 12 months as we look ahead to an exciting year for Irish Rugby.”

Jones also enjoyed a tremendous season with the Ireland Women. Her outstanding Six Nations performances were followed by a superb display when the Gloucester-Hartpury hooker scored a hat-trick of tries against Japan. 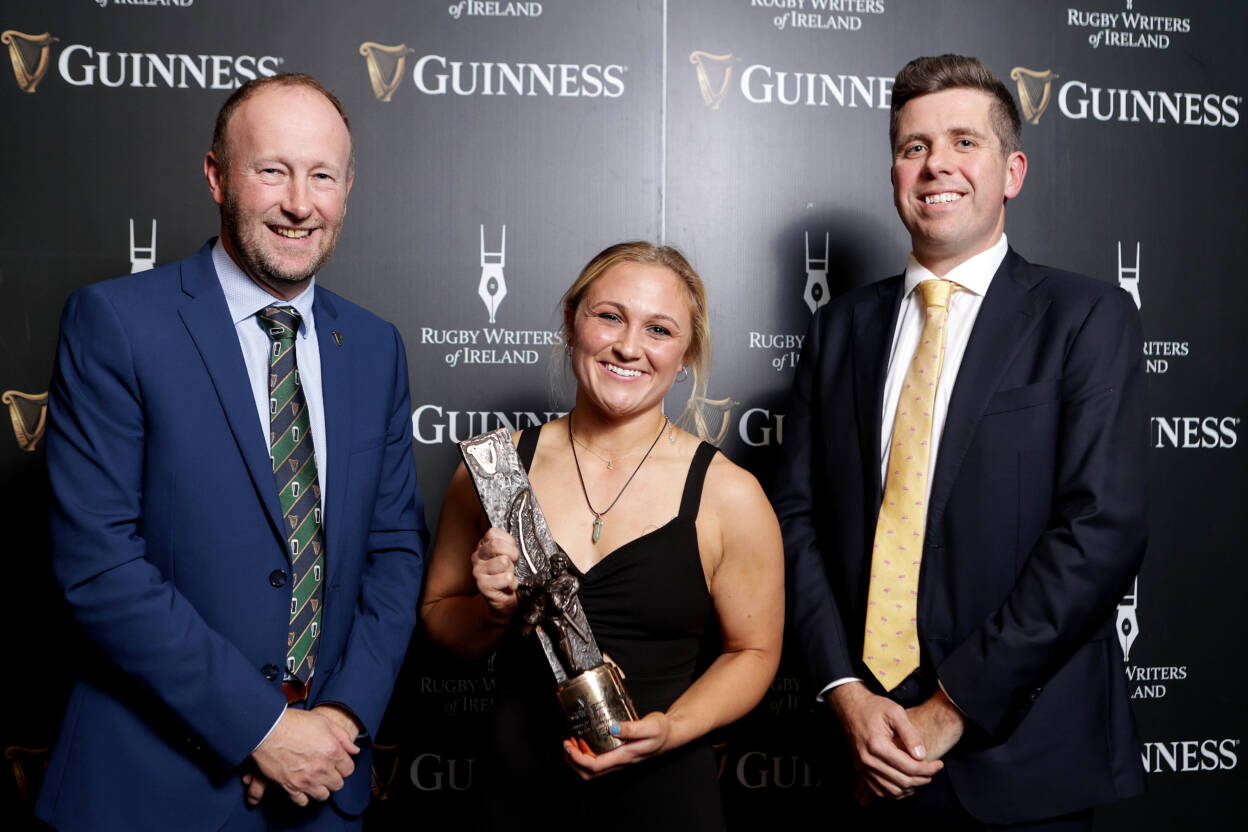 “It is a huge honour to be named the Guinness Rugby Writers of Ireland Women’s Player of the Year,” said the 23-year-old from Ballymena.

“There is no doubt that this has been the most enjoyable year of my rugby career so far and to be the recipient of this award just tops that off.

“I was also delighted to be a part of Ireland’s historic tour to Japan and I am really looking forward to the years ahead with this team.”

The Ireland Men’s team was named the Dave Guiney Guinness Rugby Writers of Ireland Team of the Year in recognition of their first ever series win over New Zealand during their summer tour. 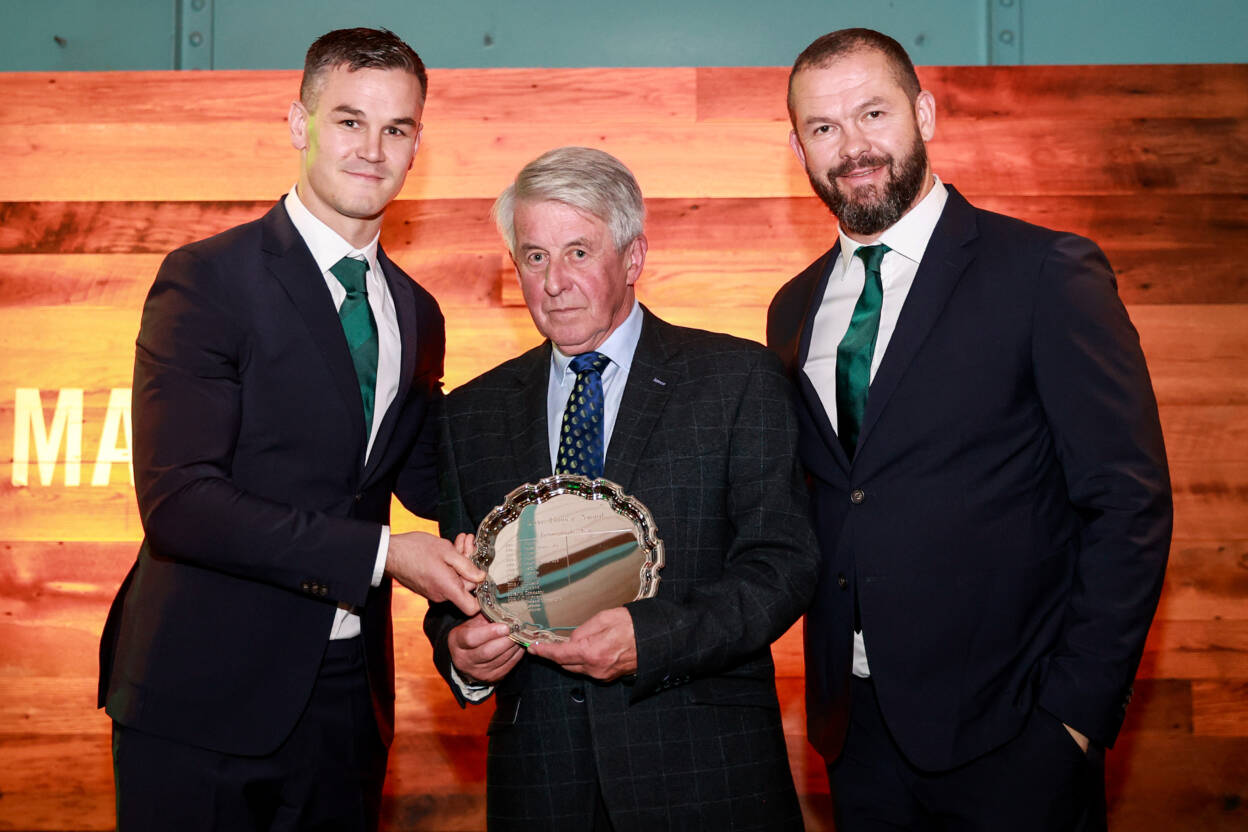 Terry Kennedy was named the Men’s Sevens Player of the Year for the second consecutive year, cementing his reputation as one of the best Sevens players in the world.

Another excellent season for Kennedy saw him pick up the HSBC World Rugby Sevens Series Top Try Scorer title, having crossed the whitewash 50 times in this year’s series.

The St. Mary’s College speedster was selected on the World Series Dream Team before playing a vital role in Ireland’s bronze medal-winning run at the Rugby World Cup Sevens in Cape Town.

Amee-Leigh Murphy Crowe was announced as the Ireland Women’s Sevens Player of the Year, the second time she has won the award in her career.

The lightning-quick Tipperary native reached a century of tries this season while also being named on the World Series Dream Team. She played a pivotal role in helping the Ireland Women qualify for the Rugby World Cup Sevens.

Murphy Crowe also featured for the Ireland Women’s 15s side in the 2021 November internationals and the 2022 TikTok Women’s Six Nations. 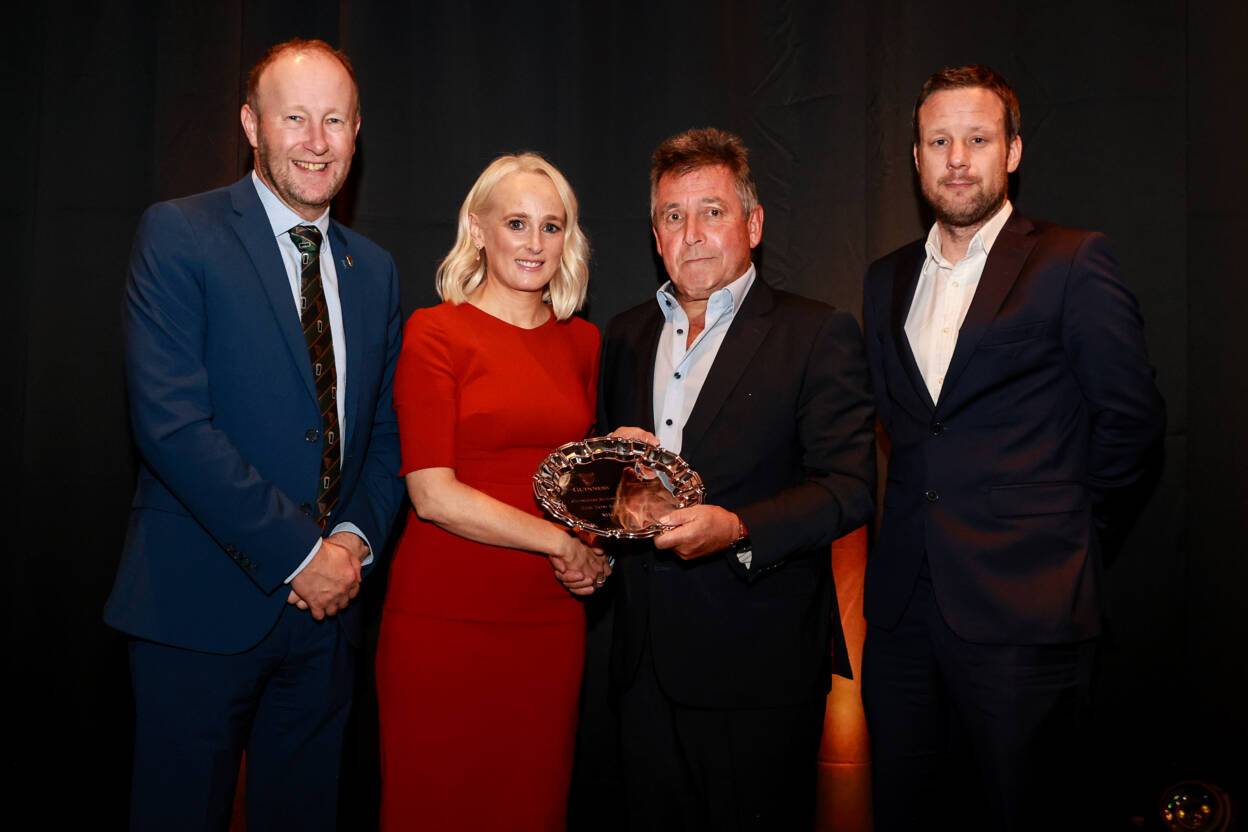 Also honoured on the night was retiring Leinster Rugby CEO Mick Dawson, who was presented with the Guinness Rugby Writers of Ireland Tom Rooney award.

Dawson has overseen a period of extraordinary success both on and off the field for Leinster Rugby.

He has been at the helm for Leinster’s most successful period, with the province winning four Champions Cup titles, one European Challenge Cup and eight league crowns during his 21 years as CEO. 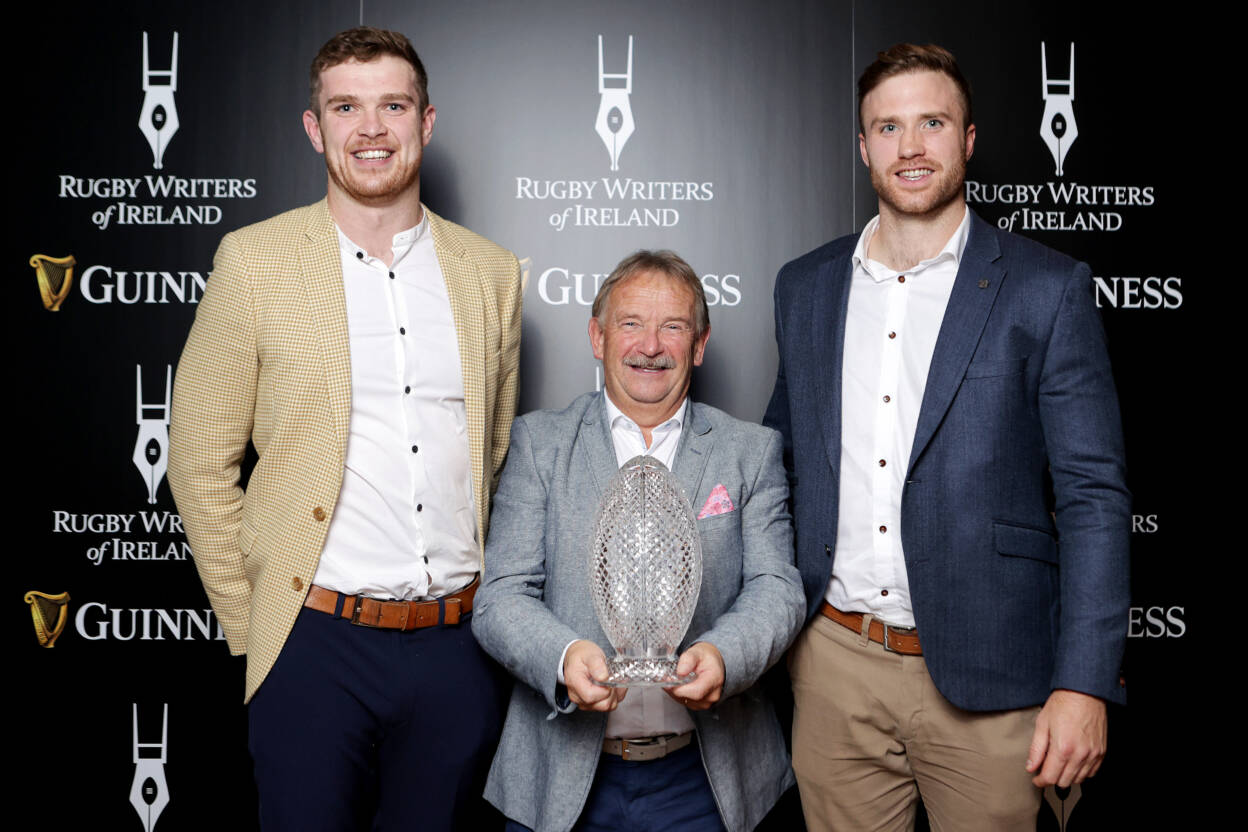 Elsewhere, Enniscorthy RFC were voted the Club of the Year on the back of their impressive achievement in winning Energia All-Ireland League Men’s Division 2B last season.

With a largely local-based squad, the Wexford club was competing at this level for the first time after winning the Round Robin Series in 2021, and won 16 of their 18 games to secure promotion. 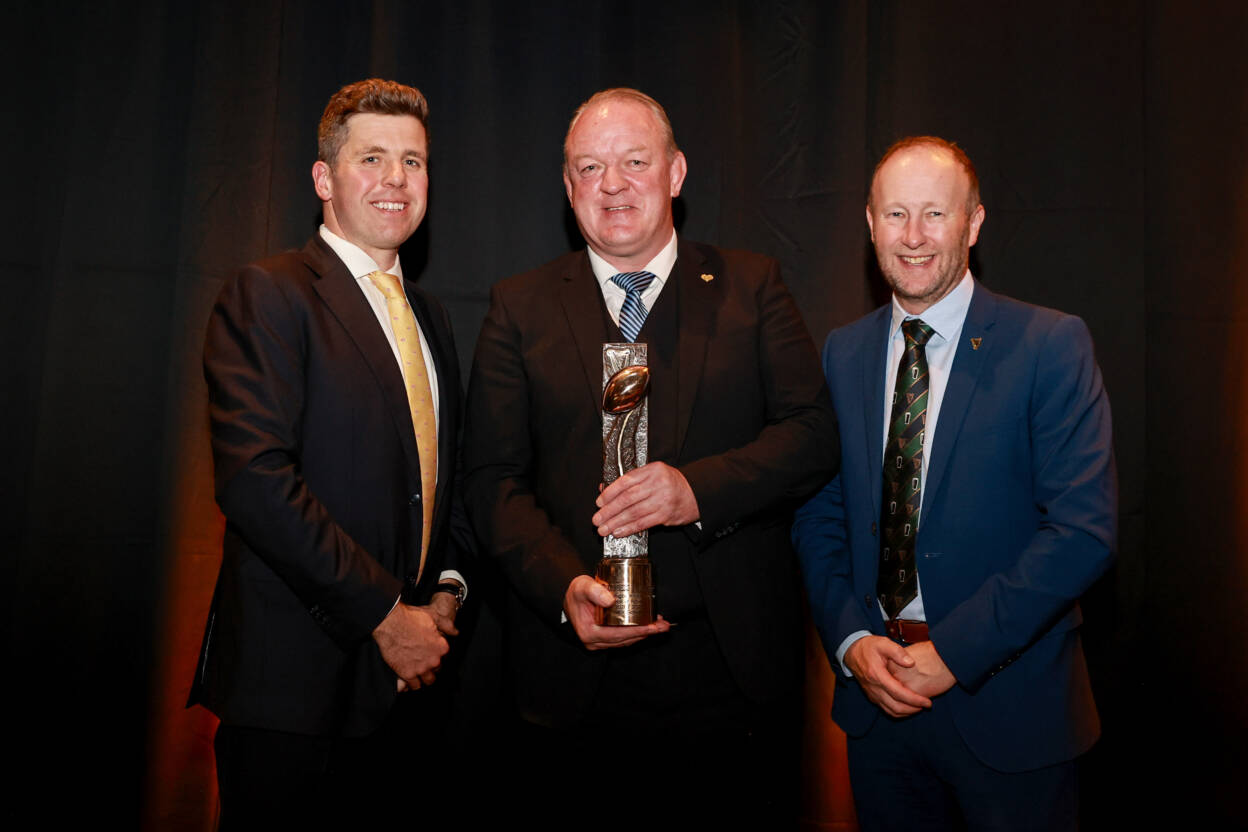 Galwey won an All-Ireland Senior Football Championship medal with Kerry before committing himself to rugby. He went on to win 41 caps for Ireland and was selected for the Lions tour to New Zealand in 1993.

Matthews, meanwhile, made 38 appearances for Ireland, captaining the side on 13 occasions. He was also part of the 1985 Five Nations Championship-winning team and represented Ireland at two Rugby World Cups in 1987 and 1991. 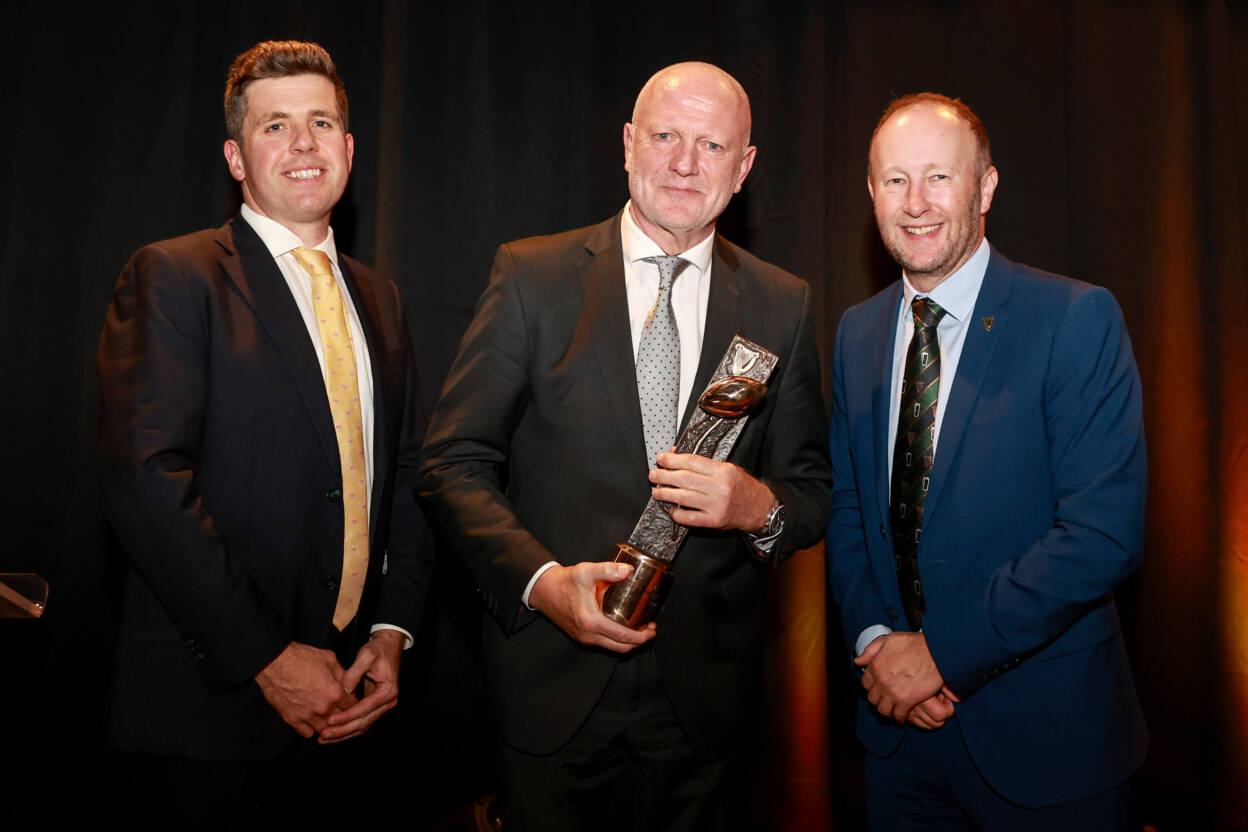 Rory Sheridan, Head of Partnerships for Diageo, said: “Guinness is proud to recognise the outstanding achievements and contributions to Irish Rugby during the 2021/22 season.

“As a long-term partner of both Irish Rugby and the Rugby Writers of Ireland, it has been great to see so much success both on and off the pitch.

“I would like to congratulate all of those who have been honoured today by the Rugby Writers of Ireland, most of all, Josh van der Flier and Neve Jones on their tremendous personal achievements this past season.

“Both players showed tremendous leadership throughout, and I thoroughly enjoyed watching them on the pitch last year.

“I would also like to share my heartfelt best wishes to Mick Dawson on his retirement following a hugely successful tenure as Leinster Rugby CEO. On behalf of Guinness, I wish him all the best in the future.

“All of us at Guinness have been delighted to see the rugby community – players, fans, media and beyond – come together once again and embrace the camaraderie that comes with this rugby occasion, and we are delighted to once again be celebrating days like this together.”