The Championship’s leading two teams went head-to-head in Donnybrook, and Ulster, who had a fourth try of the campaign from captain Zac Solomon, drew level just before half-time.

However, the Andy Wood-coached Leinster side had too much firepower in the end as they picked up their third straight bonus point victory.

On the University of Limerick’s 4G pitch, Munster secured a second place finish thanks to a second half fight-back to dash Connacht’s hopes of their maiden win.

A Max Flynn-inspired Connacht led 17-7 at the interval, but scores from replacements Danny Sheahan, with his fourth of the tournament, Jake O’Riordan and Brian Gleeson saw the hosts prevail on a 26-17 scoreline.

Scrum half Oliver Coffey gave Leinster an ideal start, slithering through from a ruck to score in the third minute after good clearing out from Hugo McLaughlin and Fenelon had opened up the space.

Having broken free from Ben McFarlane to cross to the left of the posts, Coffey’s effort was converted by Old Wesley’s own Tom Larke. A well-timed turnover penalty, won by Cameron Faith, lifted Ulster in response.

However, armed with a knock-on advantage in the ninth minute, Leinster’s backs flooded out to the left where captain Sam Berman released Finn Treacy through a gap and the big winger shrugged off Ethan Graham’s tackle to score. 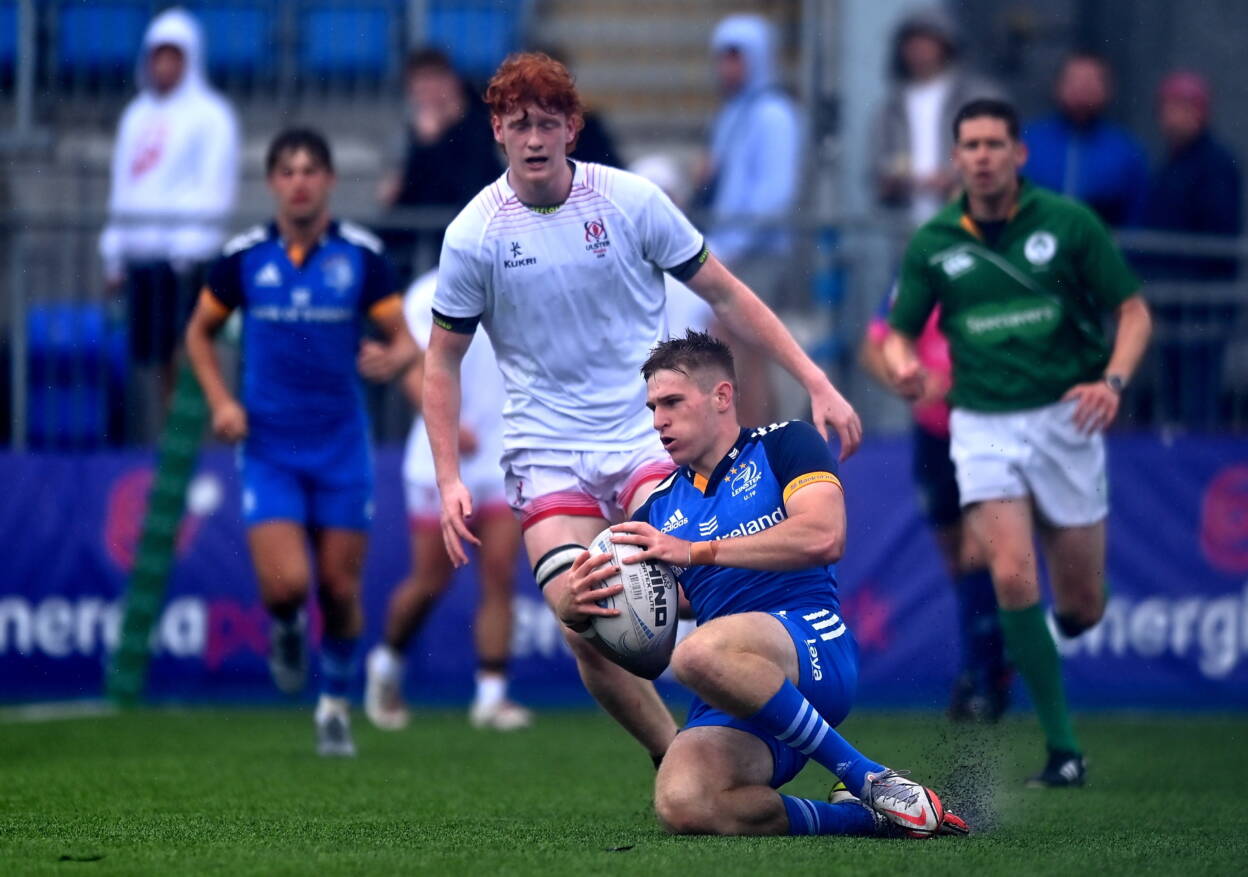 Treacy (pictured above) nipped in close to the posts to give Larke a straightforward second conversion, making it 14-0, but again Ulster put together an encouraging response as they began to threaten in attack.

Out-half Charlie Beattie broke up into the hosts’ 22 and his kick through almost set up a try for Graham, before a subsequent penalty was sent to the corner and a well-executed lineout maul saw skipper Solomon plunge over at the rear.

McFarlane converted impressively in the wet and windy conditions, and Ulster were able to hold firm when Leinster came hunting for a third try. Again, flanker Faith showed his ability at the breakdown to force a penalty.

Leinster centre Luke Kritzinger bounced off a tackle on a powerful run to the line, but the scrambling Ulster defence squeezed out a knock-on and their doggedness in their own 22 was duly rewarded with a late levelling try.

Leinster blew a number of lineout opportunities, including a crooked throw and being turned over from a maul, and Solomon roared back for Ulster with a brilliant break through the middle of a lineout drive.

The Campbell College hooker made a full 35 metres, and with Faith and Graham also carrying well, it set up Ireland Under-18 Sevens captain Mark Lee to crash over from close range. McFarlane equalised with the conversion. 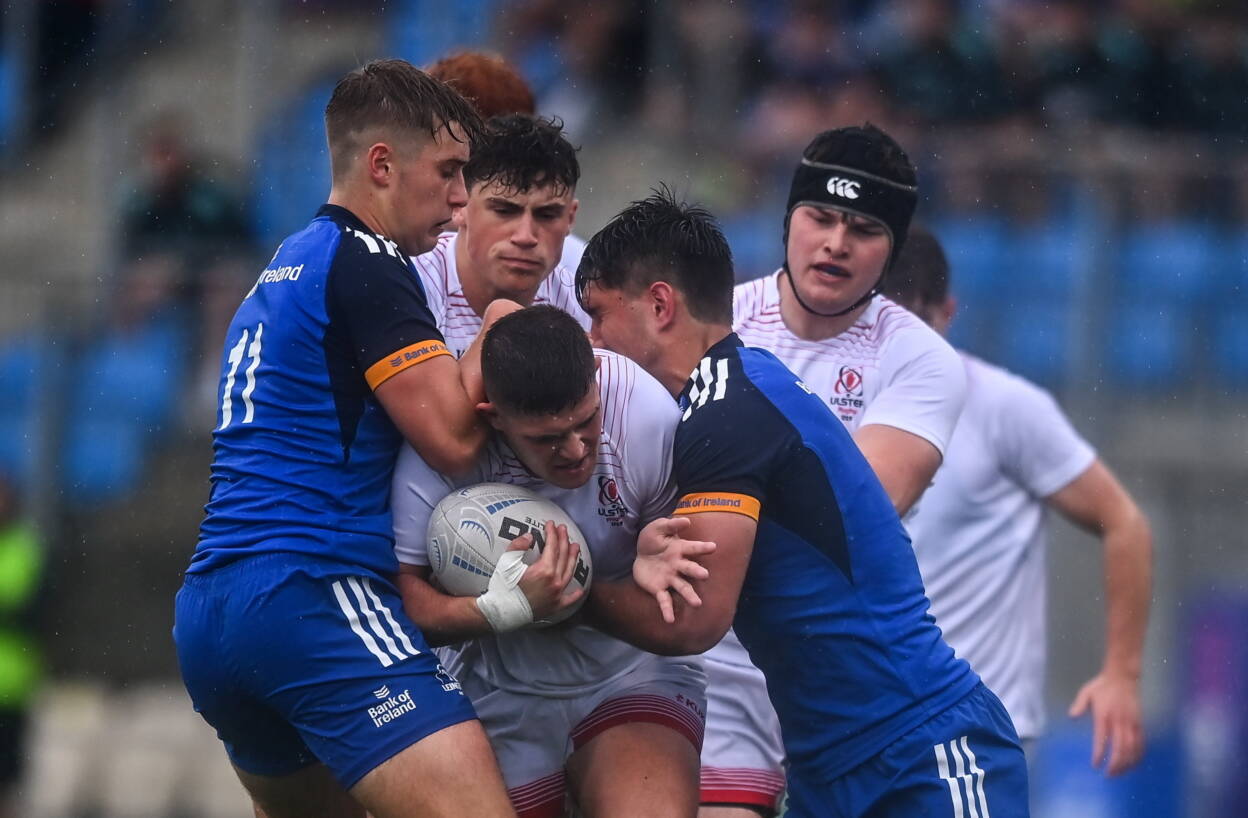 Just two minutes into the second half, Leinster retook the lead when countering from a kick. Coffey’s clever dummy created the opening, and he connected with Berman who propelled Fenelon down the left touchline for a 40-metre run-in.

Ulster were kicking themselves as they had failed to profit from an earlier Josh Stevens break, and with Larke’s well-struck conversion from the left, they were back trailing by seven points amid a scrappy spell.

Full-back McLaughlin launched Leinster forward again in the 54th minute with an excellent run from deep. Luke Policky straightened up the attack before hooker Smyth cut back inside and finished strongly for the bonus point try.

The extras were knocked over with aplomb by replacement Sean Naughton, who had combined with Berman to find Smyth wide on the right.

17-year-old Ulster Academy lock Joe Hopes and James McKillop, who picked up a turnover penalty, made sure the visitors battled on. The closest they came to a score during the dying minutes was when centre Rory Ellerby was held up.

Connacht captain Flynn won the first big breakdown battle to launch his side forward, and a slick dummy and slaloming break by Senan Phelan almost delivered an opportunist try off lineout ball.

The much-improved westerners succeeded in disrupting the Munster lineout early on, but Sean Edogbo’s surge through the middle, combined with Danny Sheahan’s bumping off of a tackler, gave the hosts the momentum they craved.

Munster skipper Jacob Sheahan was held up from a subsequent quick tap, the aggressive defending and blustery wind making it difficult for both teams to hold onto the ball and build phases. 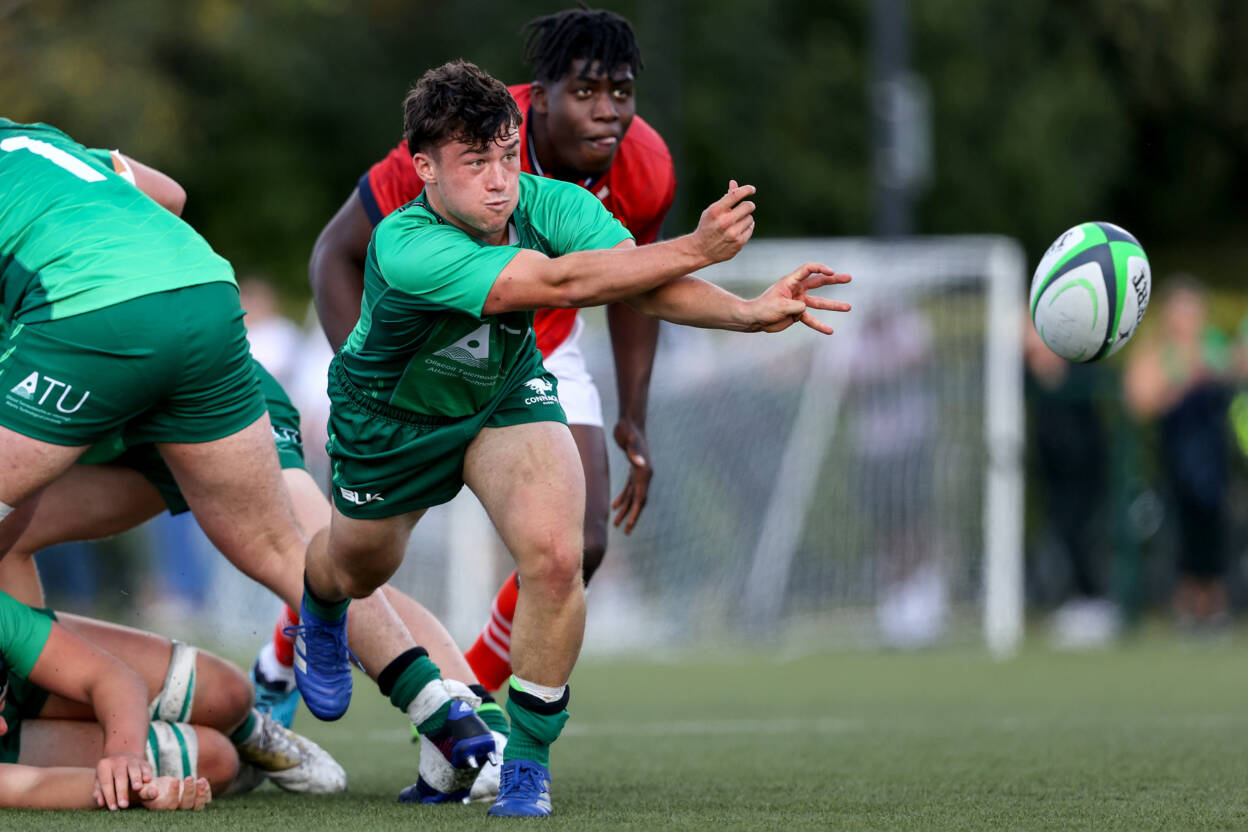 Connacht second row Conor Ryan’s silky break from halfway, with Tomas Farthing (pictured above) up in support, was a warning sign to Brendan O’Connor’s charges, who then watched Flynn tear through off a lineout maul.

The breakthrough came on the 20-minute mark, Connacht going wide with a Phelan cross-field kick before moving play back to the left where a neat line of passes – including Hugh Gavin’s decisive one – released prop Dylan Bolger for the try-line.

Phelan’s curling conversion bounced away off the right hand post, but JP Walsh’s youngsters were quick to increase their lead with a second try run in just five minutes later.

Phelan used a Munster knock-on to give Sean Fox a chance to stretch his legs, the out-half then tidied up a loose ball and linked with Oisin Dolan who catapulted the inrushing Farthing over the whitewash, with the scrum half making sure he got a good grounding.

Now 10-0 behind, Munster miscued at lineout time and fell further behind a couple of minutes later when Connacht used their own set piece as a telling launchpad.

Sweeping the ball infield from a lineout, Harry Rogers’ short pass sent influential number 8 Flynn slicing in between the Munster centres to romp over from the edge of the hosts’ 22. Phelan’s conversion made it 17-0.

Despite Connacht’s Blayze Molloy stealing a lineout, Munster managed to hit back on the stroke of half-time. A pacy move off a scrum saw centre Gordon Wood (pictured below) spin out of a tackle and wriggle over, showing good strength to touch down. 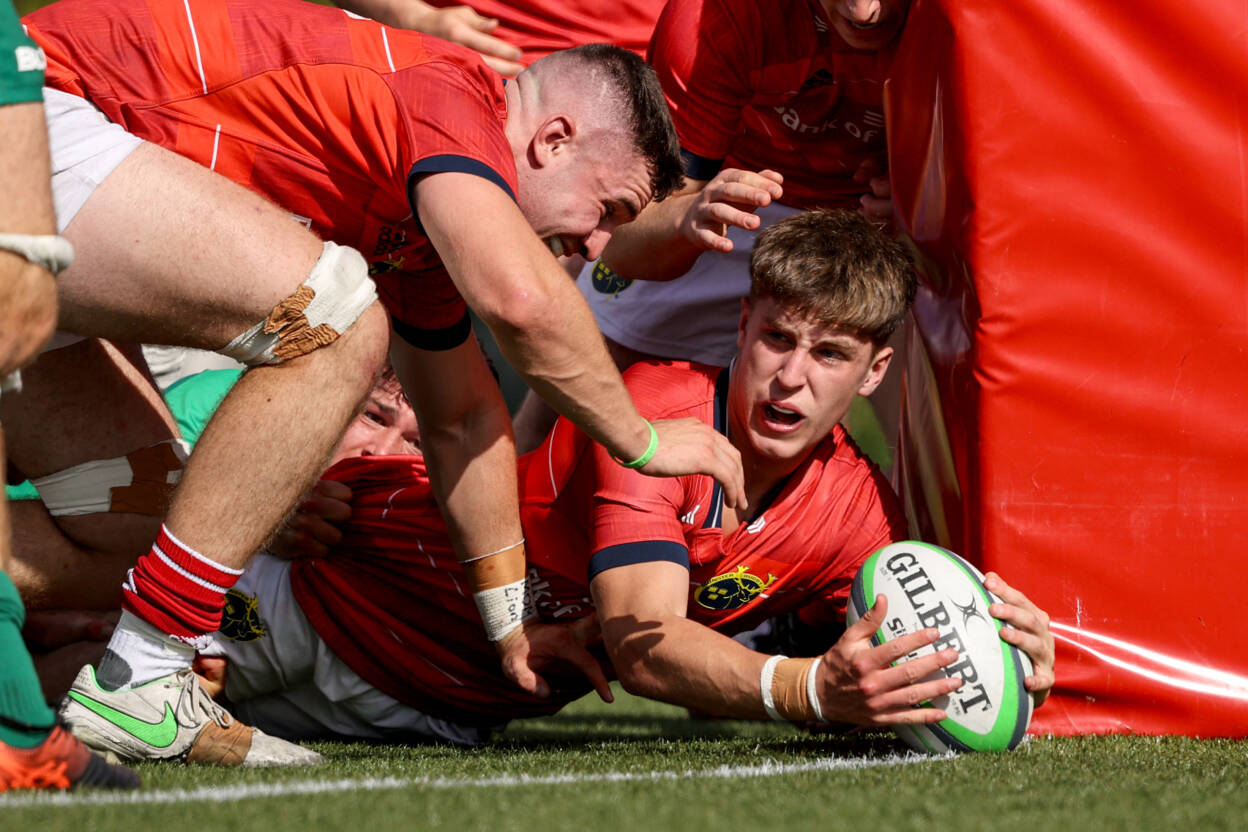 Just six minutes into the second half, Munster cut the gap further to 17-12 after sticking a penalty into the right corner. A well-marshalled maul allowed hooker Sheahan to break off and score.

With the Munster bench having quite an impact, Flynn had to come to his side’s rescue with some fine work at the breakdown but they conceded another try with 19 minutes remaining.

Scrum half O’Riordan fed Evan O’Connell for a midfield break and took the return pass, darting through to score from 35 metres out as he slipped away from two tacklers.

Despite Connacht feeling aggrieved about the referee’s positioning and a potential forward pass in the build-up, the try stood and was converted by full-back Ben O’Connor for a 19-17 lead.

Connacht’s hopes of knocking Munster off their stride – back rower Gleeson came on to make some incisive carries – suffered a setback when busy winger Fox was yellow carded for a second high tackle.

The westerners were struggling to get out of their own half, and the pressure resulting in a clinching 67th-minute try from Gleeson who barged over despite losing his left boot. O’Connor tagged on his third conversion. 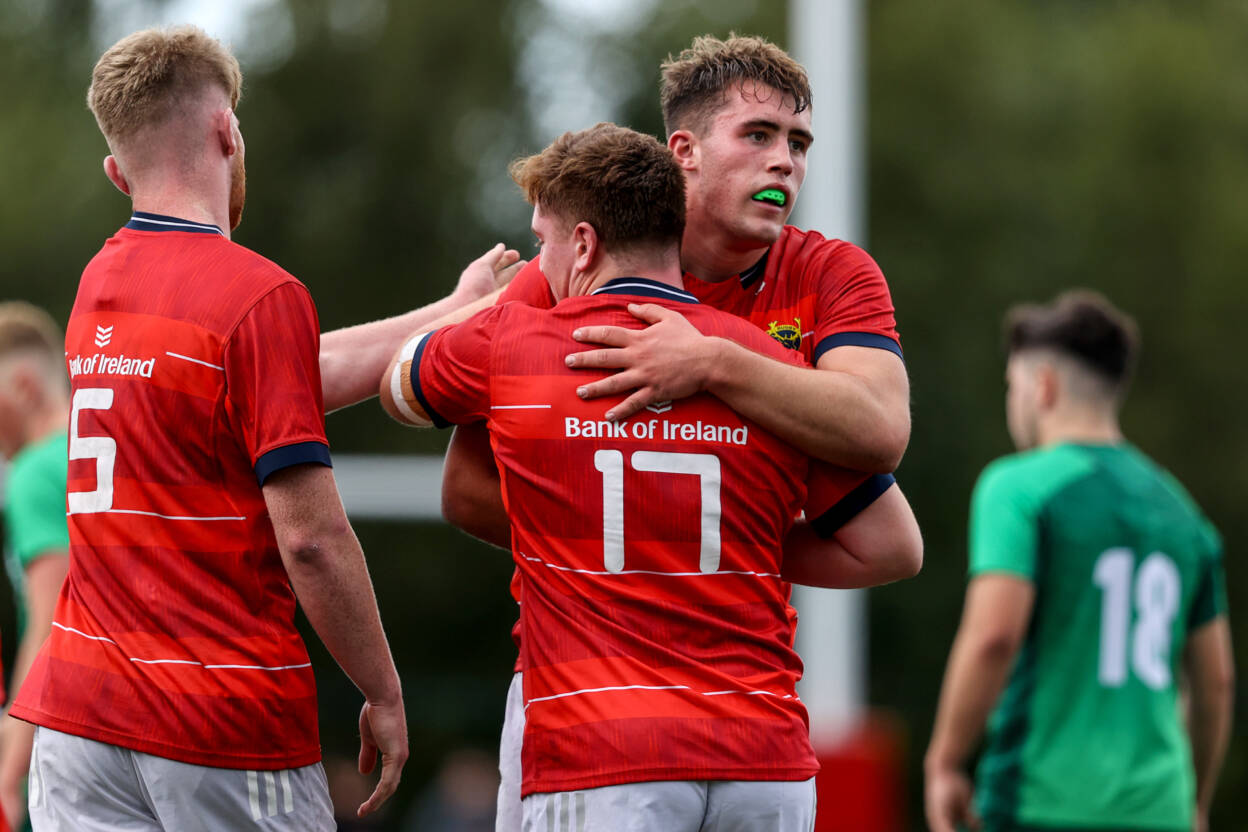 Round-Up: Two Out Of Three For Leinster On Opening Day Of Boys Interpros