Fresh from winning European silver with the Ireland U-18 Sevens team, Munster’s Gene O’Leary Kareem converted lock Eanna McCarthy’s 65th-minute try and that proved to be the difference in a hard-fought 19-17 victory.

The defending Schools Interpro champions, Leinster fell behind to an early try from full-back Jed O’Dwyer, who accelerated out of a tackle to score as he showed the pace that earned him an Ireland U-18 Sevens call-up.

The game ebbed and flowed, with both sides having regular visits to the opposition 22. Leinster were held scoreless, though, and Matt Te Pou’s 29th-minute try – following an O’Leary Kareem steal – gave the visitors a 12-0 interval lead.

Andrew Cosgrave and Ciaran Mangan continued to threaten in the Leinster back-three, and a superb collective counter attack earned them a try finished off by supporting winger Charlie Molony.

Out-half Tom Murtagh’s conversion made it a five-point game, and an increasingly-confident Leinster drew level on the hour mark when Clongowes centre Harry Roche-Nagle ducked under a tackle for a well-taken try.

Munster’s reliable lineout provided the platform for CBC Cork’s McCarthy to cross at a vital stage, and although nice hands released Aaron O’Brien for a quick-fire Leinster response, the Fiach O’Loughlin-coached visitors held firm to take a narrow verdict. 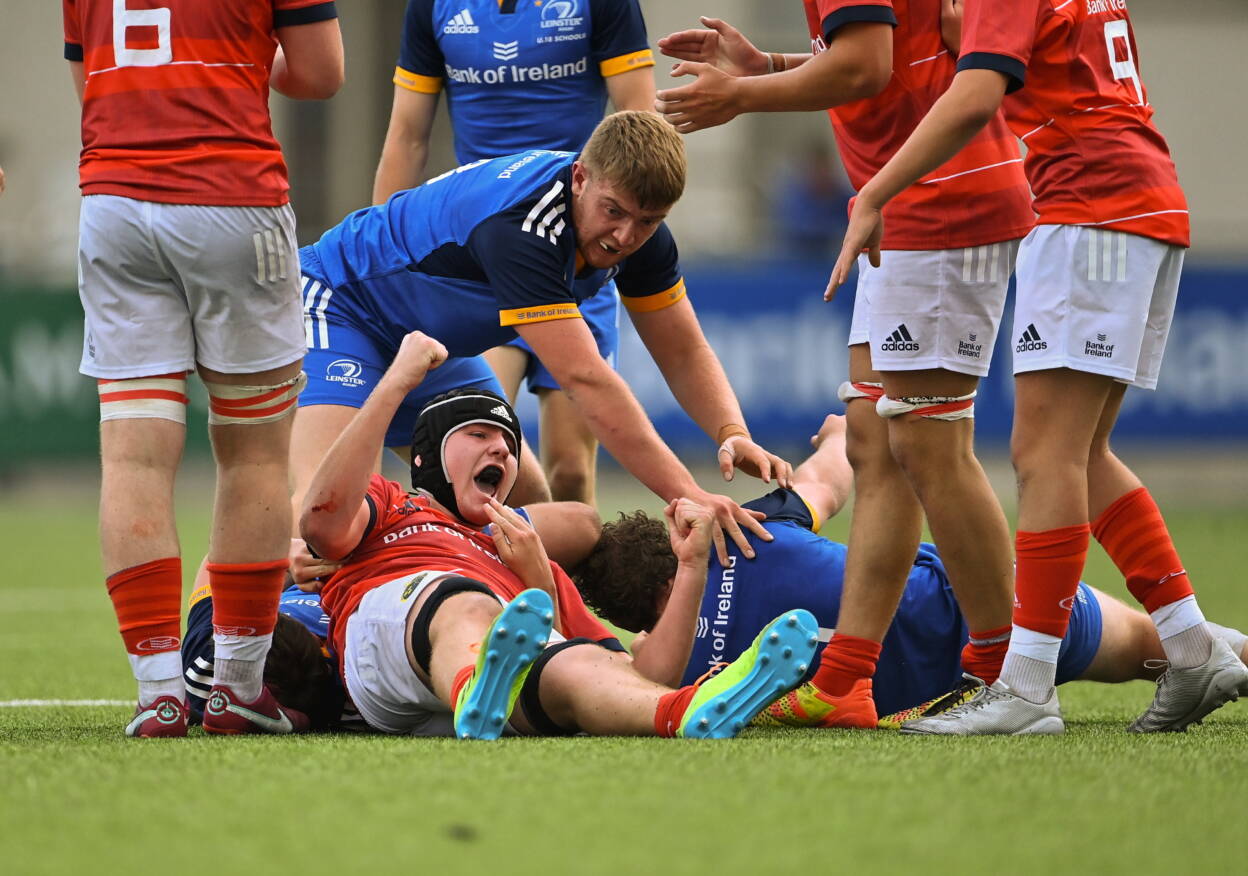 Damien McCabe’s Leinster side trailed 12-10 at half-time, though, as tries from full-back David Kelliher (18 minutes) and centre Michael O’Donovan (21) cancelled out an earlier Farrell effort out wide.

Munster were rewarded for some smart kicking and clever hands, creating the opportunity for Kelliher to sprint over on the left. Bantry Bay’s O’Donovan dived over soon after, rewarding Ryan Delaney’s initial chase down of a kick.

There were missed opportunities for Leinster, who were twice held up from tap penalties, but Mullingar winger Conor Moore took them into double figures thanks to good work in the build-up from Sam Mills and Rory Allen.

The teams were locked level at 15 points apiece early in the second half, with Farrell’s second try followed by an equalising penalty from Munster out-half and captain Hicks.

Unfortunately for Noel O’Meara’s charges, the scores dried up and Leinster clinically put the result to bed. The impressive Farrell raced clear from inside his own half to complete his hat-trick and bag the bonus point, the conversion coming from James Harris.

Farrell increased his influence when breaking from deep, setting the wheels in motion for replacement Neil Byrne to go over in the 65th minute. Longford number 8 Mills closed it out with try number six, converted again by Harris. 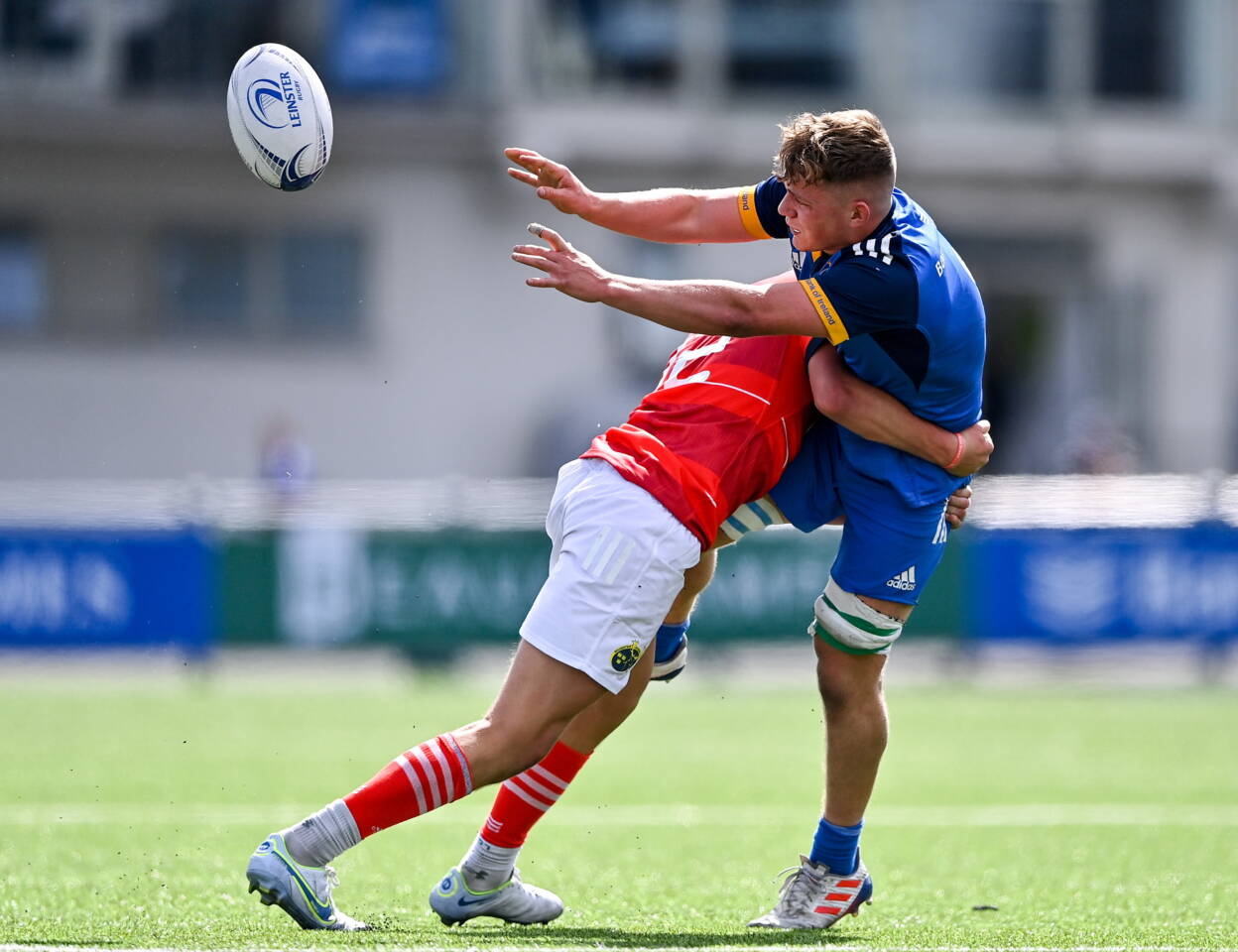 The top two finishers in last season’s Under-19 Men’s Interpros went head-to-head, and Jack Murphy’s opportunist late try split them in giving Leinster a 24-19 triumph over their Munster counterparts.

There was a terrific advertisement for U-19 interprovincial rugby, reigning champions Leinster hitting the front when hooker Stephen Smyth, having been accurate in the lineout, touched down from a neat one-two with Finn Treacy.

Munster had some gems in their line-up, including strong-carrying pair Brian Gleeson and Danny Sheahan. Their well-drilled maul sent PBC hooker Sheahan over in the 11th minute, followed by Ben O’Connor’s conversion.

Frustratingly for the visitors, just as they were making headway in pursuit of a second try, Leinster captain Sam Berman ran in an intercept score which out-half Murphy converted.

There were notable steals by Gleeson and lock Evan O’Connell, yet Leinster’s attack carried the greater threat. Berman turned some late pressure into points, setting up winger Hugo McLaughlin to spin out of a tackle and make it 19-7.

Into the second half, Munster’s muscular forward play paid dividends with Sheahan again gaining ground before Gleeson, his Ireland U-18 Schools team-mate earlier this year, drove in low to score.

O’Connor’s second successful conversion closed the gap to five points, and it was a tied game in the 53rd minute, Leinster unable to stop a maul which had a gleeful Sheahan at the end of it.

Munster came hunting with two more lineout drives, but this time Leinster stood firm and Murphy was able to kick clear on the second occasion as the tension increased.

The talented Pres Bray number 10 went on to his province’s match winner, a 66th-minute break down the short side seeing him score in the left corner following an initial run by his schoolmate Treacy. 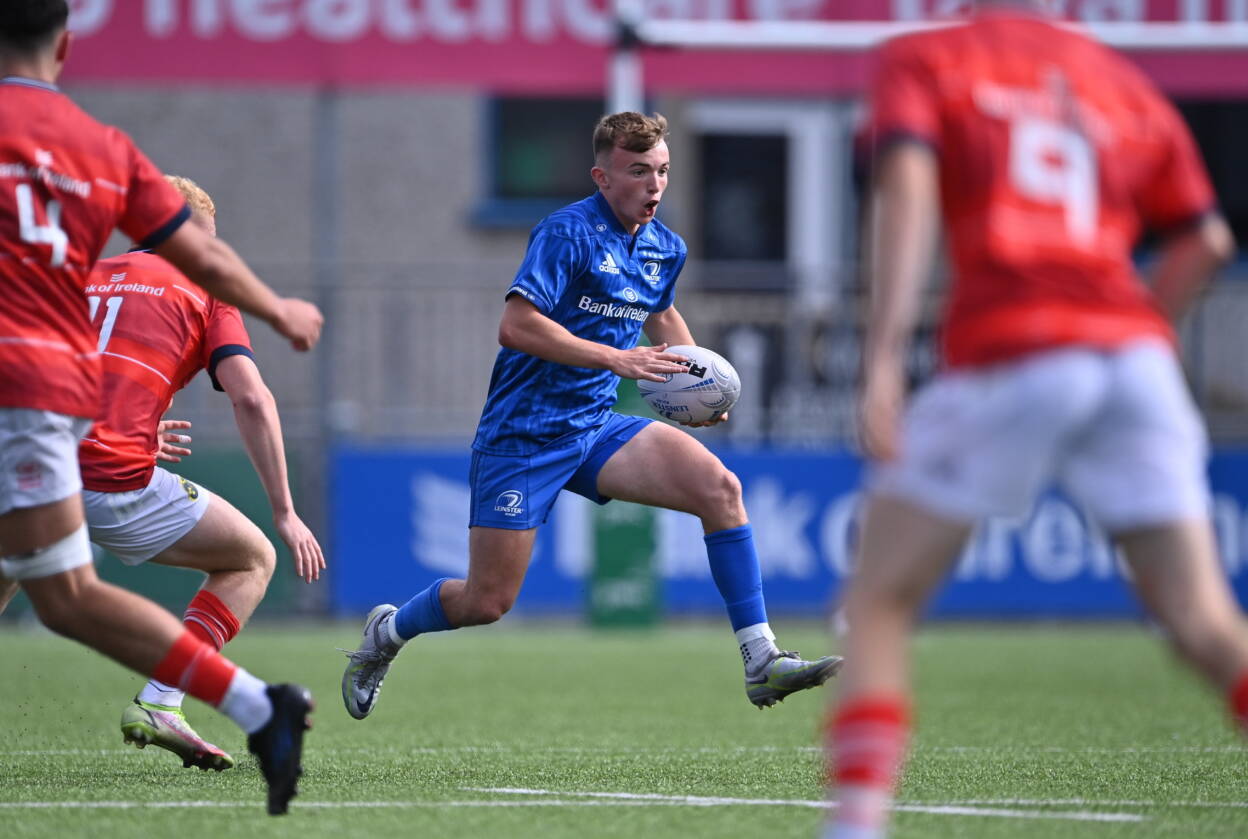