Andy Wood’s Leinster team ran in eight tries against Connacht in Athlone to move a step closer to retaining the PwC IRFU Under-19 Men’s Interprovincial crown.

Tadhg Brophy and Conor Tonge scored two tries each in a 56-7 bonus point victory for Leinster, who host second-placed Ulster in a mouth-watering title decider at Energia Park next Saturday.

Wood’s youngsters are top of the table with 10 points and a +54 scoring difference. Ulster have six points (+32), with Munster now on five after edging out the northern side 19-15 in a hard-fought clash in Cork.

Replacement Jack Somers’ decisive late try gave Brendan O’Connor’s Munster outfit their first win of the campaign. Ulster had led on two separate occasions, but they were outscored by three tries to two in the end.

Connacht, who have had some fine individual performances with centre Hugh Gavin catching the eye, will close out the Championship this Sunday with a trip to the University of Limerick to play Munster.

Round 1 Round-Up: Two Out Of Three For Leinster On Opening Day Of Boys Interpros

Round 1 Round-Up: Ulster Under-19s Hit The Ground Running In Newforge

Connacht and Leinster both showed an eagerness to play with width from the early stages, opposing wingers Andrew Quinn and Sean Fox getting opportunities to stretch their legs but the visitors were first to threaten.

Sean Hopkins and Tomas Farthing earned the defensive plaudits for the westerners as Leinster were held up twice in quick succession before their next raid delivered points.

An eighth-minute penalty was tucked away into the right corner and Athy hooker Niall O’Hanlon crashed over from a well-driven lineout maul. Sean Naughton’s conversion made it a seven-pointer.

Cathal Kelly was crowded out in his attempts to respond for Connacht, and Leinster extended their lead to 14-0 soon after. Naughton’s inviting pop pass put full-back Hugo McLaughlin darting up into the 22 and he fed the supporting Brophy (pictured below) to go over by the posts. 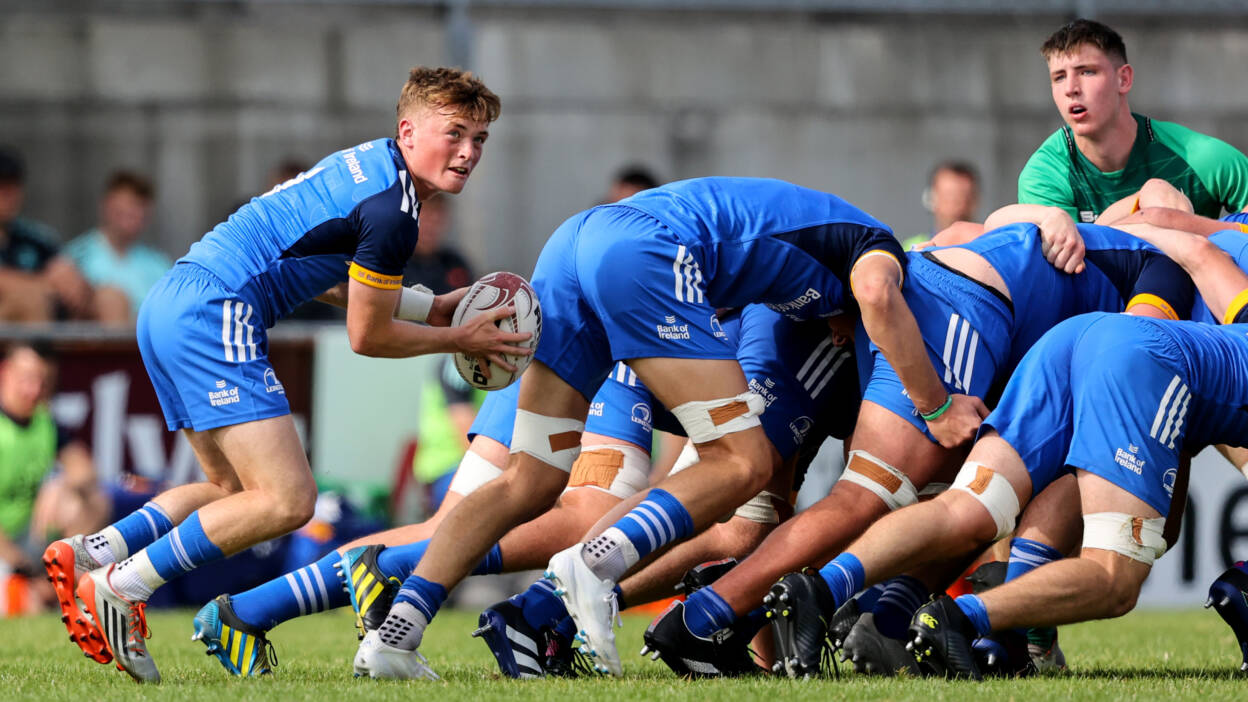 Connacht captain Max Flynn narrowly missed out on an interception, the ball just evading his grasp, and the home side were unable to convert two promising maul opportunities due to a knock-on and then a turnover.

Good approach work from Leinster, including locks Michael O’Reilly and James O’Loughlin, paved the way for Kilkenny College out-half Naughton to slip in between two defenders and dot down in the 23rd minute.

He converted his own try from straight in front of the posts, and as Leinster continued to beat a path back to the Connacht 22, busy hooker O’Hanlon had a score ruled out for a forward pass.

Just two minutes into the second half at Dubarry Park, Blackrock College’s Tonge struck again, wriggling over from close range after Finn Treacy’s initial block and pick-up, and Naughton attacking up close to the line. 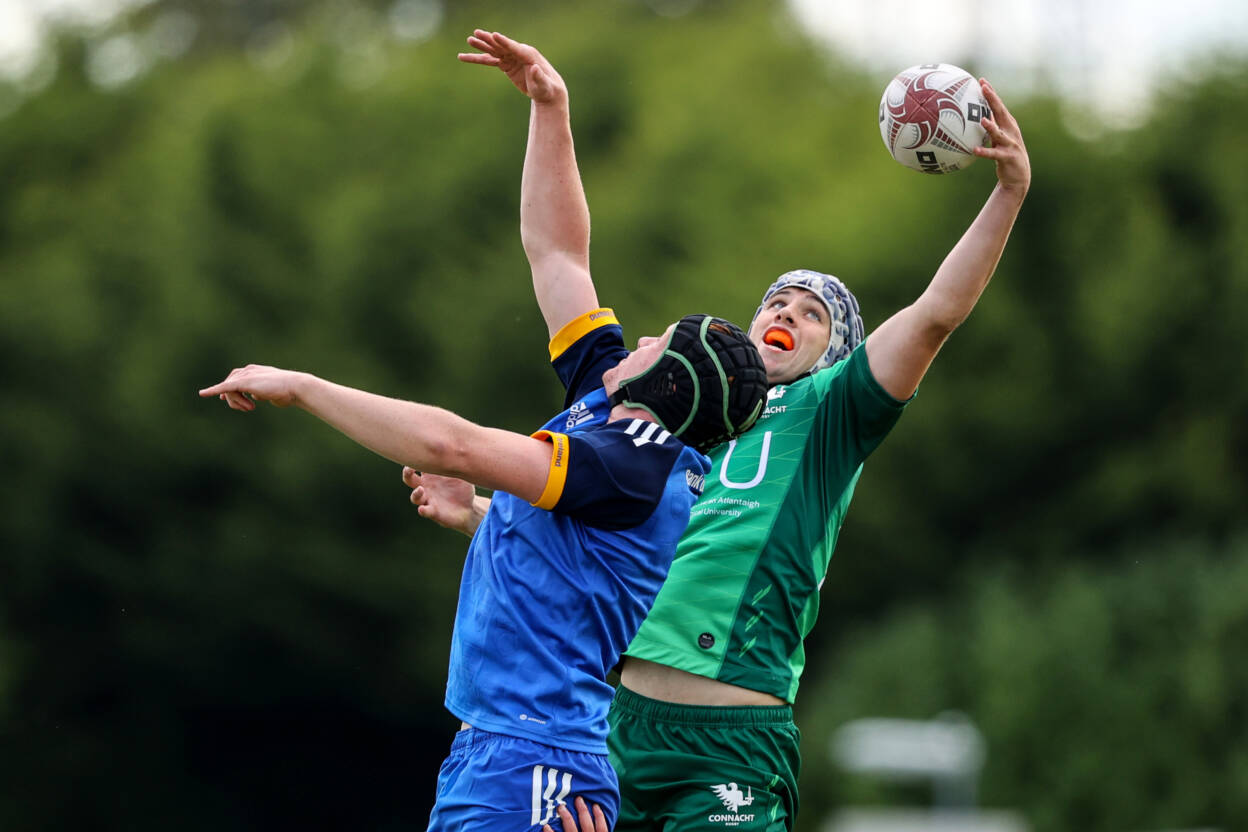 The extras crisply added by Naughton for 35-0, Connacht’s back-line then began to make inroads, with replacement Blair Norton released into space and putting the hosts in scoring range following a kick chase.

The westerners deservedly got on the scoreboard when scrum half Farthing flicked a superb pass behind him for Galwegians clubman Gavin to break through from the edge of the Leinster 22, and he got around Quinn and showed impressive strength to score despite Tom Larke’s cover tackle.

The conversion from Senan Phelan cut the gap back to 28 points, but further pressure from Leinster yielded more tries with scrum half Brophy diving over having followed up on Luke O’Connor’s excellent charge past two tacklers. 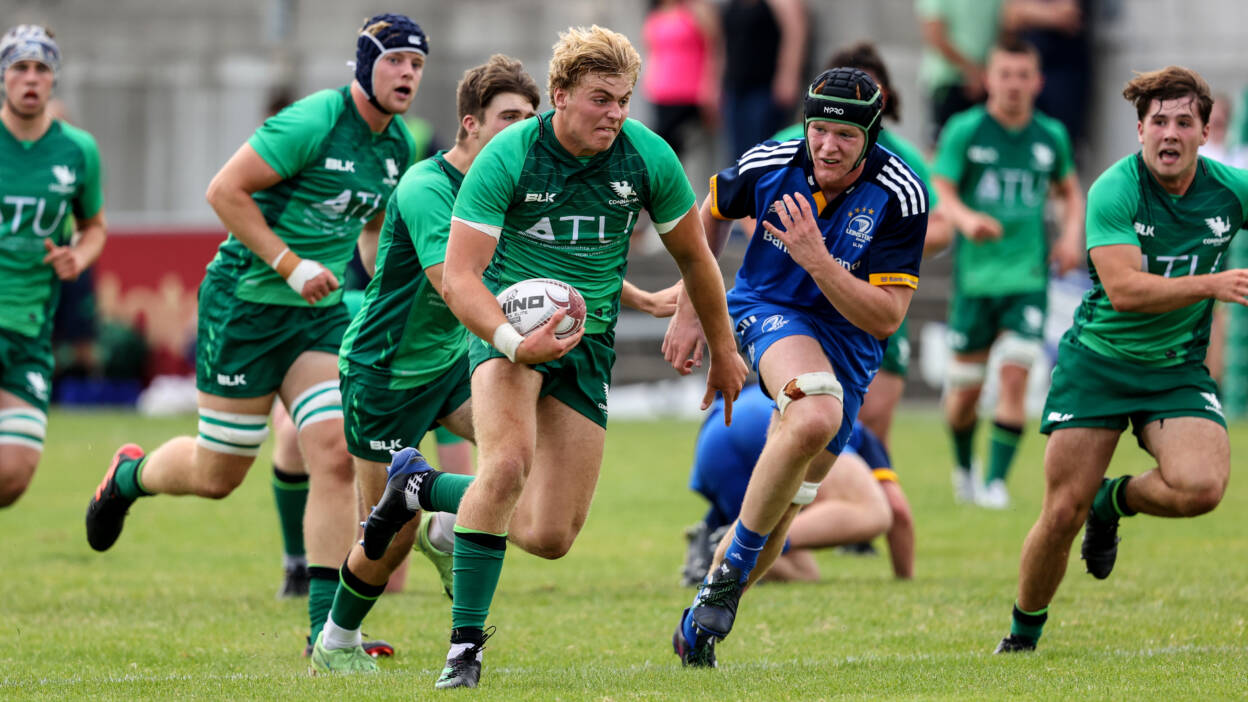 Luke Policky was next on the scoresheet, powering over from a few metres out, with fellow replacement Adam Shirley’s big clear-out having opened up the space. Centre Larke tagged on the two points this time.

Leinster’s bench was eager for more and they closed out the scoring with a well-taken maul try, replacement hooker Stephen Smyth getting the grounding with Larke converting to the left of the posts. 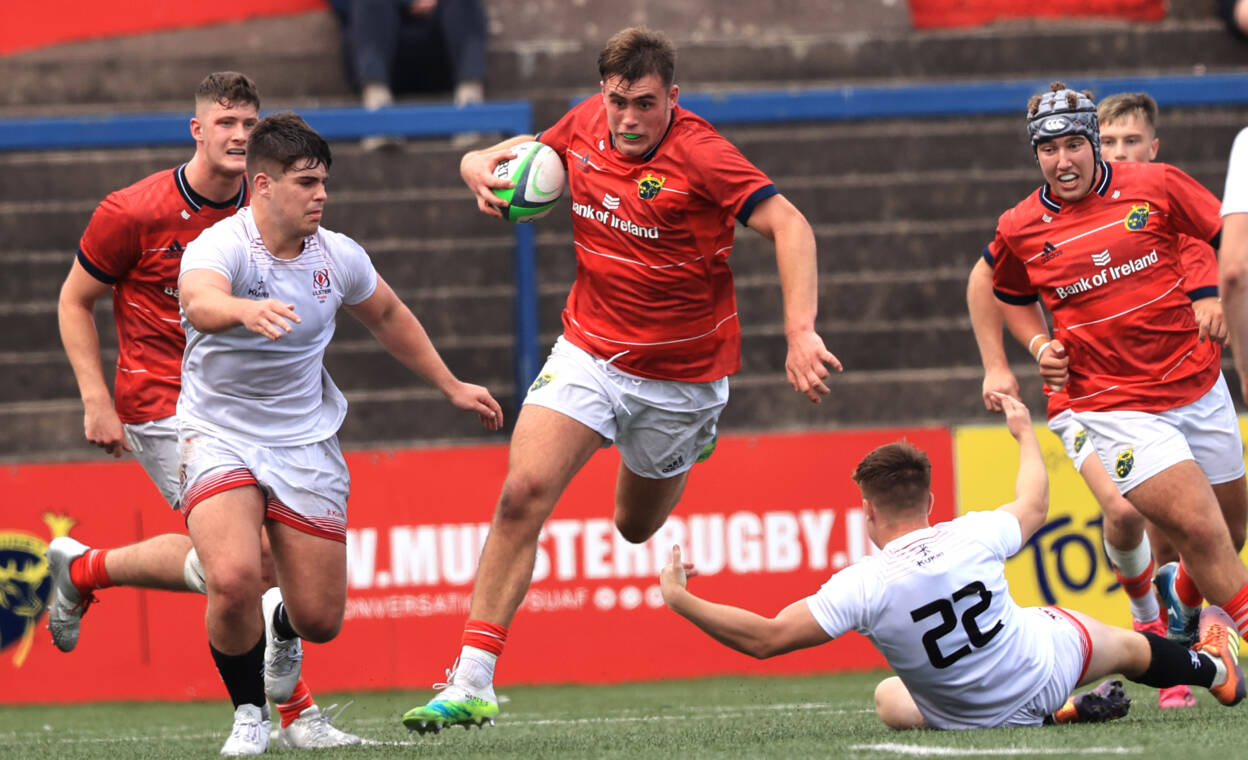 Jonathon Graham’s Ulster squad made the trip to Musgrave Park buoyed by last week’s big win over Connacht, but Munster, determined to bounce back to winning ways, started the stronger.

It was O’Connor’s charges who took the lead in the sixth minute, Cillian O’Connor’s superbly-weighted grubber kick was grounded in the right corner by winger Oisin Pepper as Munster played with a penalty advantage.

The game’s opening try went unconverted and the first 20 minutes were rather stop-start, with both defences coping well with kicks and Ulster ironing out some early lineout and kicking issues.

The visitors drew level courtesy of a powerful rolling maul, the surge coming at just the right time as hooker and captain Zac Solomon crashed over near the left corner.

After Ben McFarlane’s conversion attempt bounced back off the near post, Ulster kept hold of the momentum when Solomon snatched up turnover ball and they gained ground out wide.

Kenny and McFarlane spearheaded a break towards the Munster 22, James Girvan made metres through the middle during a penalty advantage, and then flanker James McKillop dinked a speculative kick over the top.

That might have been the end of the attack, but Graham rose above Pepper to collect the ball and despite Stephen Kiely’s tackle, the Belfast Met winger twisted his way over the line for a brilliant opportunist try.

McFarlane rifled over the touchline conversion, giving Ulster a further boost as they claimed a 12-5 lead. However, some intelligent tactical kicking from Munster allowed them to hit back just before half-time.

With Evan O’Connell a reliable target in securing lineout ball, the home pack built up a head of steam in mauling towards the whitewash. Hooker Danny Sheahan plunged over at the rear, with number 10 O’Connor landing the levelling conversion. 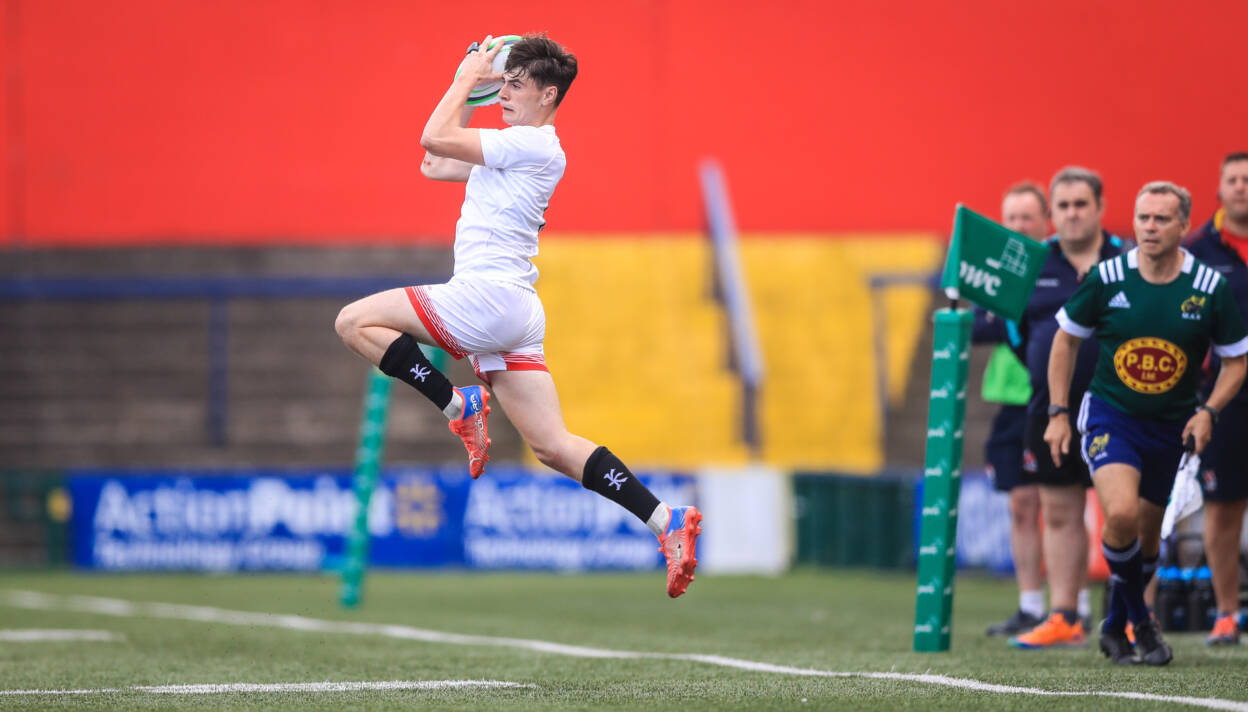 Twelve points apiece at the interval, the rate of handling errors increased on the restart and Ulster were unable to take advantage of a midfield break from RBAI’s Rory Ellerby.

The freshly-introduced Harry Long was a whisker away from a try for Munster, weaving through after a neat first-phase set-up involving Wood and O’Connor, but Graham and a scrambling McFarlane managed to hold him up.

Bryn Ward’s turnover penalty released more pressure as Ulster got away from their own try-line, the next few minutes being nip and tuck until a counter attack saw prop Jacob Boyd carry up to the Munster 22 and draw a high tackle.

Although McFarlane pushed his 55th-minute penalty attempt wide, Munster were now leaking more penalties and Ulster’s maul was becoming more of a weapon as they kicked to the left corner twice.

A considerable spell of pressure, which saw Solomon brought to ground just a few metres out, ended with Munster replacement Long sin-binned for a deliberate knock-on, and McFarlane mopped up with the three points.

Back in front at 15-12 with just three minutes remaining, Ulster gave away crucial possession from the restart when O’Connell got the decision at the breakdown, teeing up a late maul opportunity.

A strong Munster drive was brought down illegally, and after hooker Sheahan carried up close from the quick tap, they retained possession, inching closer for Somers (pictured below) to smartly roll to his right and make the line.

A devastated Ulster watched on as O’Connor fired over the conversion and there was no time for a restart, leaving 14-man Munster to celebrate a victory that owed much to their composure during a grandstand finish. 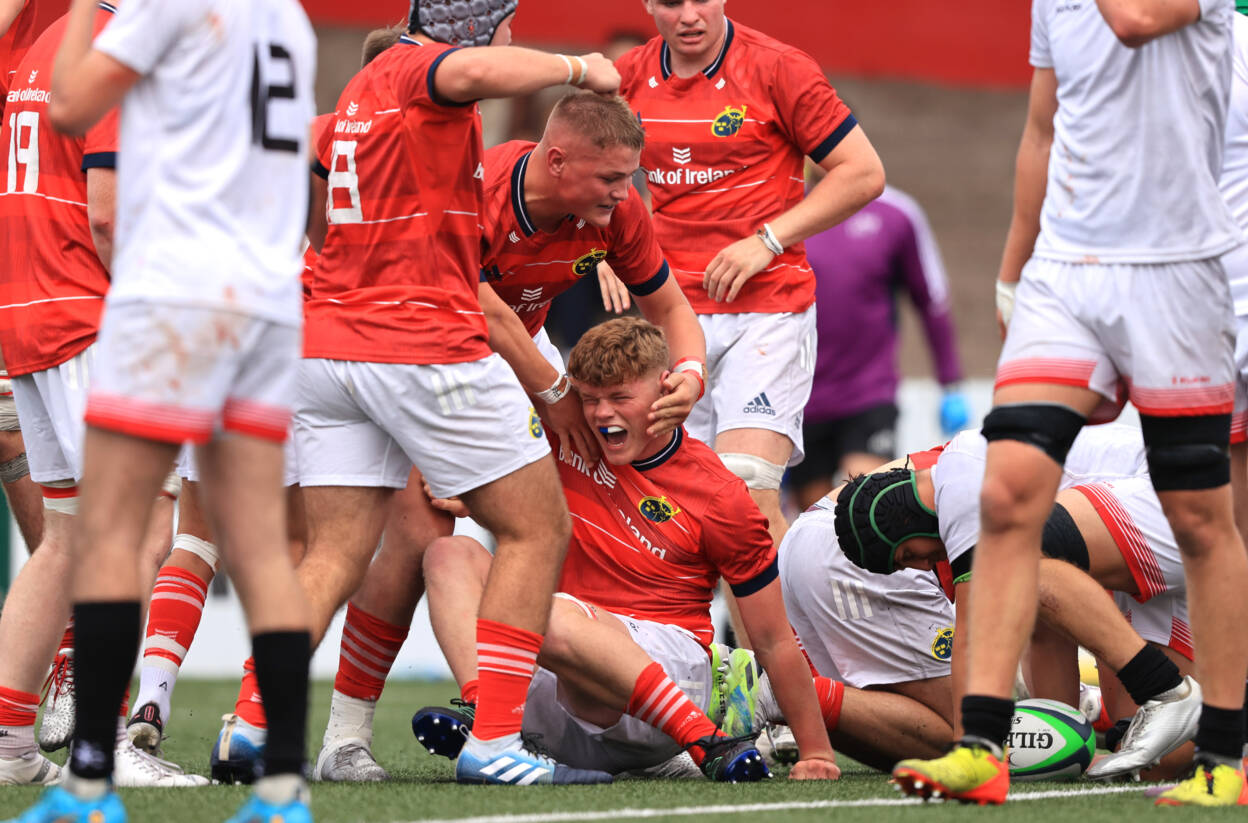