Jo Brown, Irish Rugby’s first player to benefit from an amendment to World Rugby’s regulations governing national team representation, says she is ‘honoured and excited’ to make her debut against Japan in Tokyo on Saturday.

The World Rugby Council approved the change last November and it came into effect from the start of 2022, permitting an international player to transfer once from one union to another subject to demonstrating a close and credible link to that union via birth right.

Brown, who won seven caps for England, met the criteria to become eligible to play for Ireland, as a player must stand down from international rugby for 36 months and must be either born in the country they want to transfer to or have a parent or grandparent born in that country.

The Worcester Warriors flanker last played for England in 2019 and with the appropriate Irish family link by birth, she was one of the players highlighted by the UK-based IQ Rugby lead personnel when Greg McWilliams first liaised with them last year.

“When I got the job, one of the first things I had to do was connect with Joe Lydon and Steve McGinnis who run the IQ (Irish-Qualified) Rugby programme,” explained the Ireland head coach, speaking on team announcement day in Tokyo.

“There are a wide range of players that are Irish-qualified and Jo is one of them. You’re watching her performances in the Prem (Allianz Premier 15s). I love how she goes about her business, she’s very tough and very abrasive.

“She’s got seven caps for England, her last cap was in 2019. We had a look at her over the summer and I was impressed with what I saw.

“I think she buys into the style of rugby we’re trying to play and I’m looking forward to seeing how she goes.”

Brown slots in at blindside flanker, taking over from the injured Dorothy Wall, and notably, Grace Moore, who has been on her own journey to international rugby via IQ Rugby talent identification, makes her first Test start at number 8. 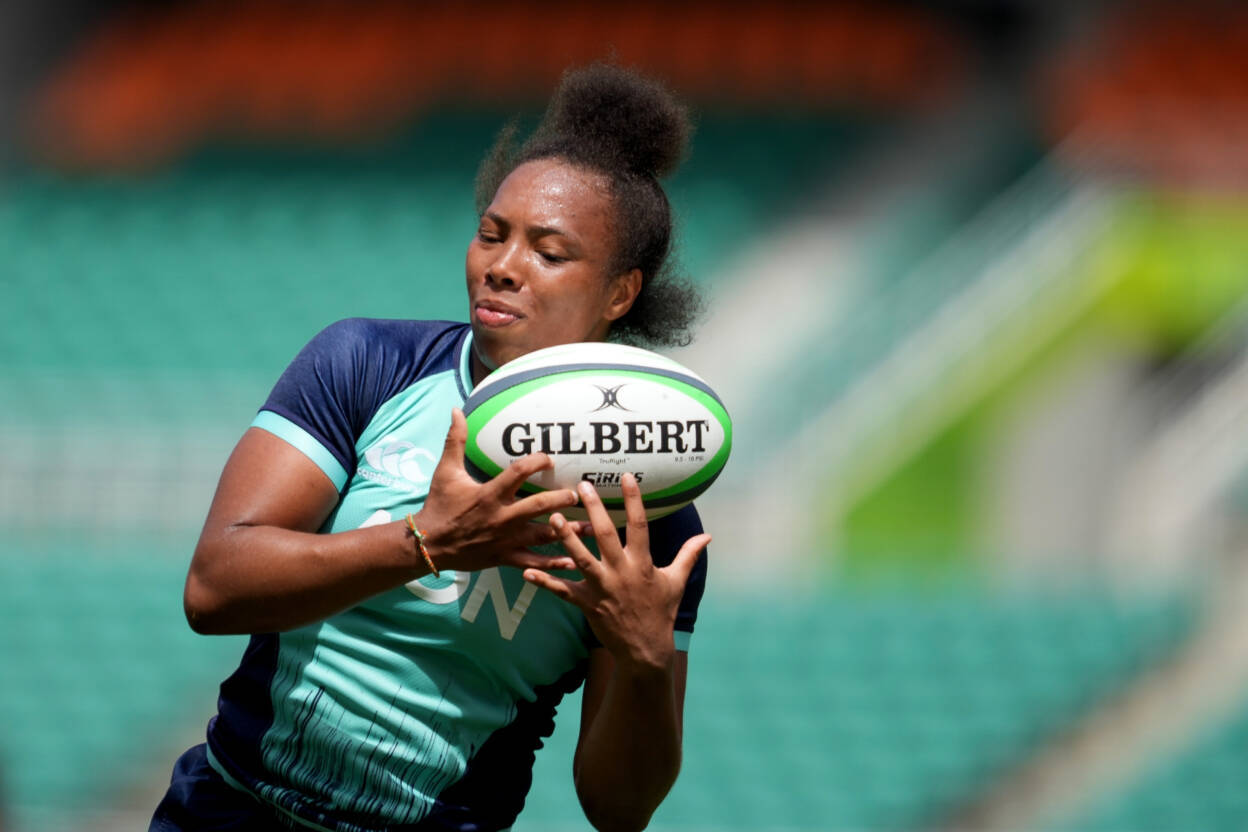 Moore’s athleticism, strength and ball-playing skills, honed initially on netball and volleyball courts, drew the attention of McGinnis when he spotted her potential when seeing her play rugby for Richmond in her native London.

Irish-qualified and embarking on an exciting development route thanks to IQ Rugby, she linked up with the Ireland Women’s Sevens programme in Dublin and made initial strides in the short form of the game before concentrating on 15s.

She helped Ireland to a third place finish in the 2021 Six Nations and has added three more 15s caps since then, also winning the Energia All-Ireland League title with Railway Union in February before signing for Saracens last month.

Moore’s move to Sarries further cements her relationship with IQ Rugby, who broke new ground this month by getting the first ever IQ Rugby Women’s team out on the field for a match against Loughborough Lightning.

Harlequins prop Hannah Duffy was involved with the IQ side and Ireland squad’s summer programme, as the Irish-Qualified system continues to unearth potential international players and maintains itself as an integral link of the IRFU High Performance pathway.

“It’s exciting, there were other people in the UK that we were quite close to selecting. There’s people who will probably come into the reckoning again for the Six Nations, and they aren’t here at the moment,” explained McWilliams, who is clearly determined to cast the net wide and broaden his pick of players.

“Hopefully like we talked about with those said individuals, that we’ll just monitor them over the season in the Allianz Premiership and see how they get on. 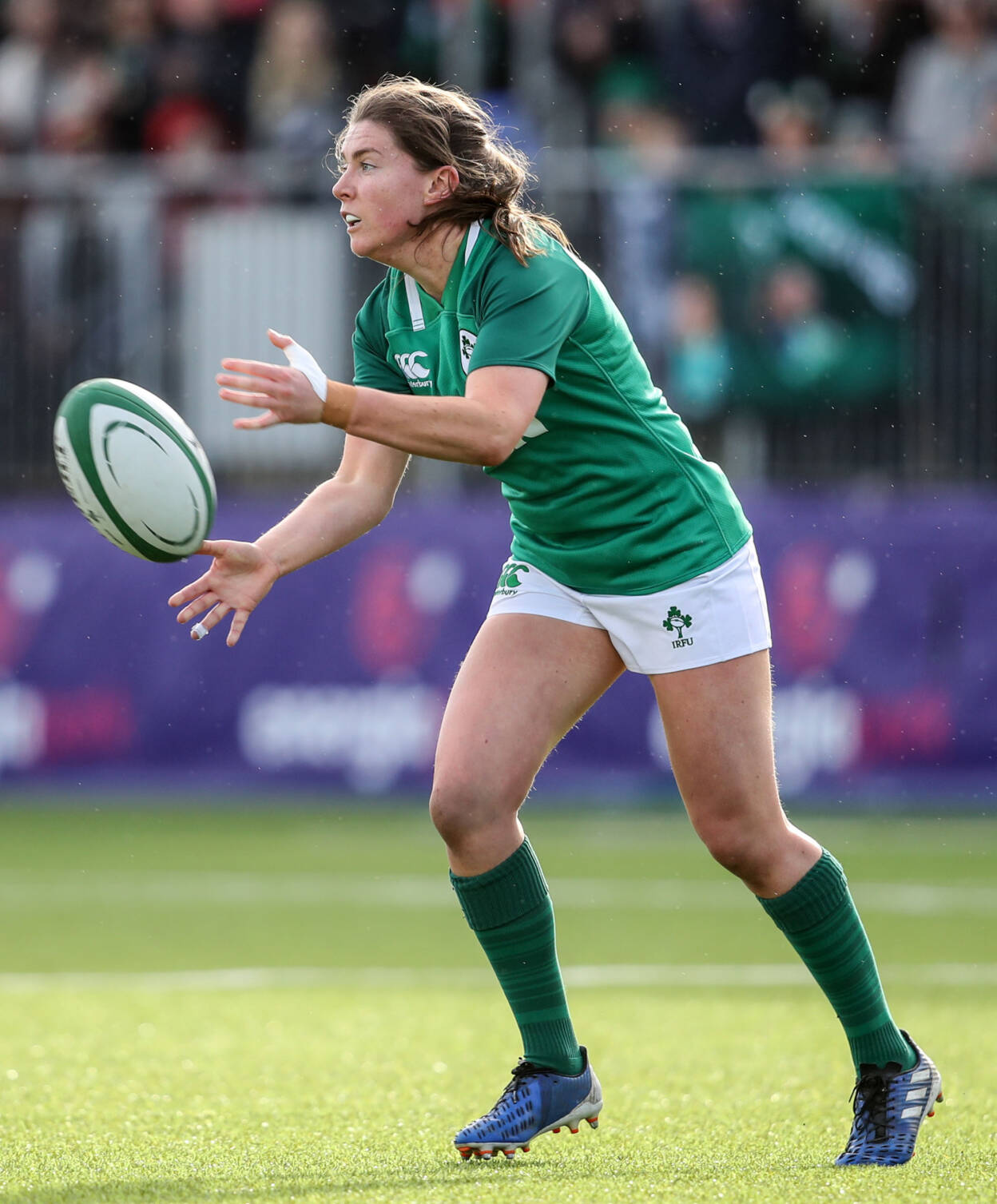 “I’m thinking about Ellen Murphy, someone who was quite close. We didn’t take her into camp because we wanted her to recover from a little injury that she had, but she’s somebody as well that we’ve looked at.

“There’s a few others like Hannah Duffy, Kathryn Buggy and Leah Lyons and others, that we’re looking to always have a look at.”

Having played at a high level for a number of seasons, 28-year-old blindside Brown could be a canny addition to Ireland’s back row ranks, especially given the retirements of Claire Molloy, Ciara Griffin and Anna Caplice in the last year.

Brown, an NHS physiotherapist by profession, will no doubt be eager to make a big first impression on her Ireland bow. She also has plenty of leadership qualities having captained a number of teams during her career.

“Jo just came in and straight away it was like she has been with the group. She has bought in to what we’re doing, added good value, and is a very good rugby player,” added McWilliams.

“She’s eligible for Ireland so we’re going to see how she goes. We want to develop a wide player pool that’s going to be competitive.

“That’s the goal certainly as we prepare for the World Cup, that’s got to be our target in three years’ time. We’re trying to test as many players and she’s one of them.”