Enya Breen was involved in all five of Ireland's 2022 Six Nations games, including starts against England and Scotland ©INPHO/Laszlo Geczo

After taking centre stage on the TikTok Women’s Six Nations’ final night, Enya Breen is determined to ‘build on the foundations’ set by Ireland during the 2022 Championship.

Breen converted her own last-gasp try to secure a dramatic 15-14 victory over Scotland at Kingspan Stadium, in what was Ireland’s most recent outing before this Saturday’s series opener against Japan.

Their historic summer tour kicks off in Shizuoka, with the Skibbereen native returning to the 15s international arena after a successful recent Ireland Sevens debut, winning the Krakow 7s title.

Speaking about the start of match week and training in the sweltering Japanese heat, Breen said: “It’s been an interesting few days. We took the first few days to settle in after the travel. A few people suffering with jetlag and things.

“So we were trying to get on top of our sleep, and S&C and the medics were a great help with that. We got down to work yesterday, setting the plan for the week and setting the tone.

“Kind of getting used to the heat as well, and then today was another tough day at the office. We had a big session full of contact. It felt something like 42 degrees with the humidity up at around 80%.

“Getting used to that has been tough, but it’s been hugely exciting and great to finally be here, finally settle in and prepare for the weekend.”

The 23-year-old won her first Test cap as a teenager against France in March 2019, playing alongside Sene Naoupu in the centre. It was no surprise that she had kind words to say about Naoupu after yesterday’s announcement of her retirement.

“Sene was massive to my development,” admitted Breen. “I suppose I came in as a young centre and she kind of mentored me in that capacity.

“I probably wouldn’t be where I am today without some of her guidance and some of her tips that I’ve gotten from her.

“I wish her all the best for the future. She’s been great and her contribution to Irish rugby can’t be understated.” 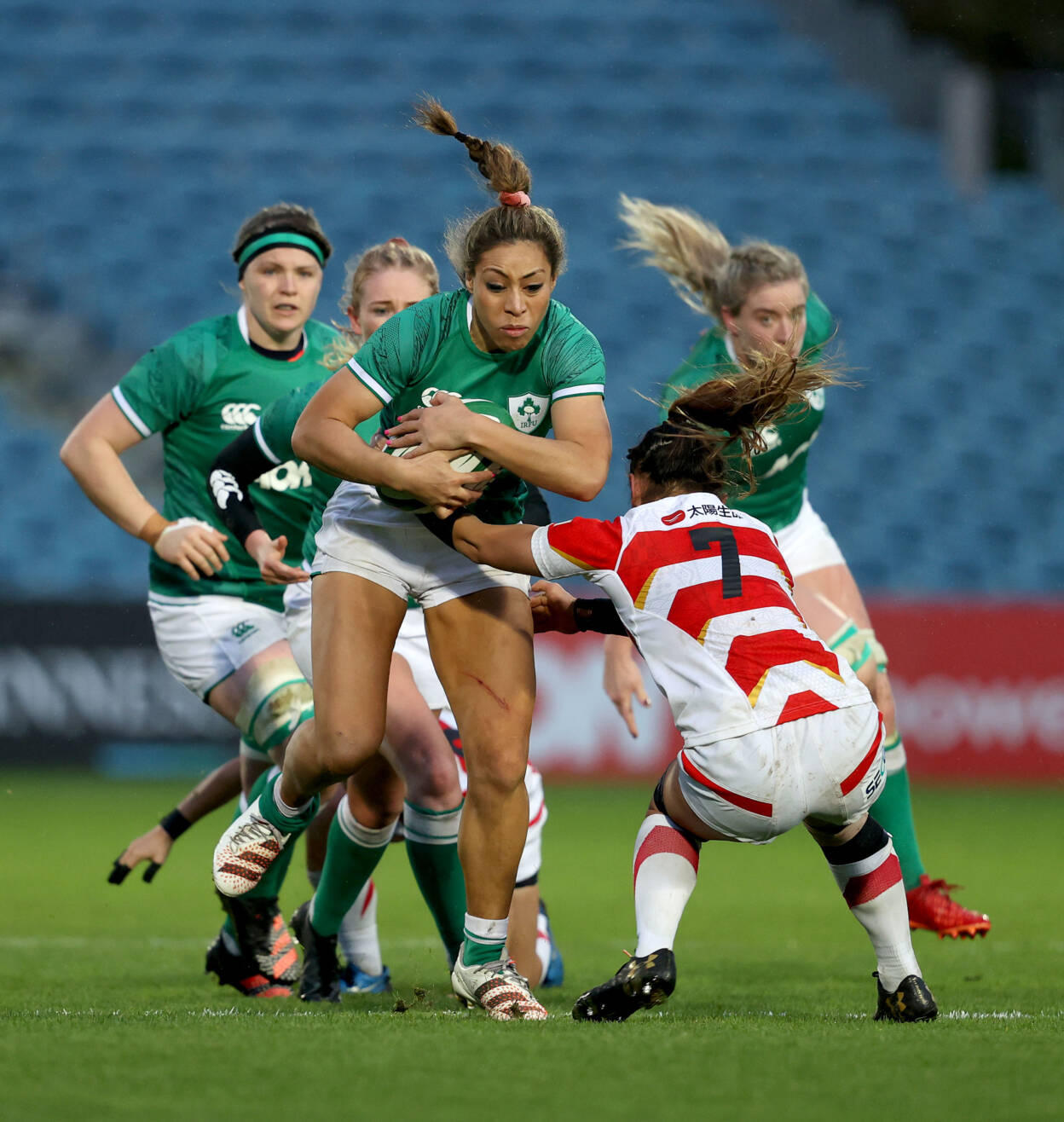 Naoupu’s decision to hang up her boots leaves Aoife Doyle as the last surviving member of the Ireland squad that won the 2015 Six Nations. Nicole Cronin was part of the extended panel that year.

As much as it is sad to see of a player of her calibre moving on, current head coach Greg McWilliams is very much looking to the future with the personnel he has taken to east Asia.

Even at such a young age herself and with 14 caps to her name, Breen is one of the more experienced members of a touring party that includes ten uncapped players.

She speaks with admiration about how the youngsters – four of whom have only recently finished their Leaving Cert exams – have taken to the high performance environment and training in such punishing heat.

“Everyone’s hit the ground running. Today was an exceptionally hard day, I don’t think I’ve ever had a training session like it,” admitted the Munster star.

The conditions are something I’ve never experienced before. But everyone’s getting the head down and getting stuck it. It’s great to see. It’s really promising, I think.

“Obviously there’s plenty of new faces on the team and in the backroom staff, but everybody has fitted in pretty seamlessly, right around the foundations that we started to develop around the Six Nations.

“Everyone’s here because they deserve to be. It’s great to see some new young fresh faces and to see what the pathways are bringing through at the moment, so it’ll be exciting to see what they do at the weekend.”

One of the players chasing her first cap is promising back Leah Tarpey, who was brought into the Ireland set-up for the last Six Nations game. The Laois teenager was part of the impressive Leinster U-18 side that won last season’s Interprovincial Championship.

“It’s been a lot to take in but it’s been a really good experience so far,” Tarpey (pictured below) said of the opening week of the tour. “Getting to form new relationships, learn new things and get better as a player.” 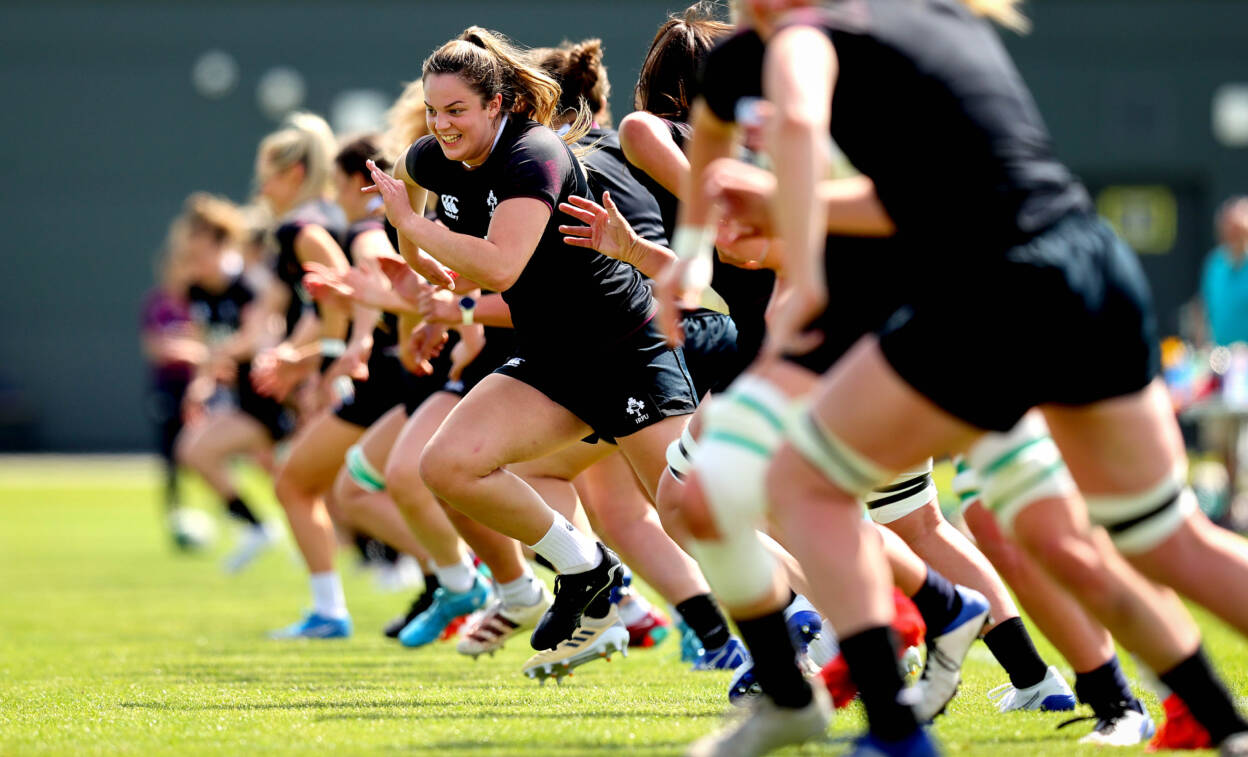 Breen, who is admittedly ‘buzzing’ to don the green jersey again, is excited about the potential of this new crop and the impact they could have as they take their first steps on the international scene.

“It’s great to have some fresh faces and they’re fitting right in. You wouldn’t think they’ve just finished their Leaving Cert, to be honest.

“They wouldn’t be here unless they deserved to be. You can see their potential, you can see what they’re bringing. So giving them the opportunity to show what they can do at the weekend will be a really big part of it.

“It’s a massive few weeks for Irish Women’s rugby, a first ever summer tour. To be part of that is pretty special. Buzzing to get going and to show what this young new group can do.”