A key factor in Ireland putting themselves in a position to win a Test series in New Zealand has been their ability to make fast starts and pick up early scores.

In each of their twelve Test matches since last July, Andy Farrell’s men have scored first-quarter tries and only once were they beaten to the punch – France’s Antoine Dupont left them trailing in Paris after just 67 seconds.

Ireland have continued the trend during the summer tour, with Keith Earls crossing in the fifth minute in Auckland and, hitting the ground running in Dunedin last Saturday, Andrew Porter struck with just two minutes on the clock.

As well as being physically sharp and mentally clued-in to build straight from kick-off, the 2022 Triple Crown winners have worked hard with high performance specialist Gary Keegan on their mental skills and staying calm and controlled in those big moments, especially away from home.

“When we went to Paris, we never spoke about the enormity of the occasion for them,” said captain Jonathan Sexton, reflecting on Ireland’s lone Six Nations defeat this season, to France in Paris. “It was their first game in a crowded stadium for a couple of years.

“We sort of didn’t acknowledge that. You turn up and the stadium is obviously full of French people, flags, everyone was going, ‘Oh my god, we haven’t played in this before’.

“It took the lads by surprise early in the game, how poorly we started. Again, you talk about the start of games and we have improved on that. So, lots of little things like that.

“I suppose how much better you need to be away from home because sometimes the 50-50 decisions don’t always go your way and the bounce of a ball doesn’t go your way, so it’s about embracing the atmosphere and thriving in it.

“We know what we are trying to do, we know how to do it and we have worked on our mental game with Gary Keegan and with ‘Faz’. Making sure we are staying in the moment, not losing concentration.” 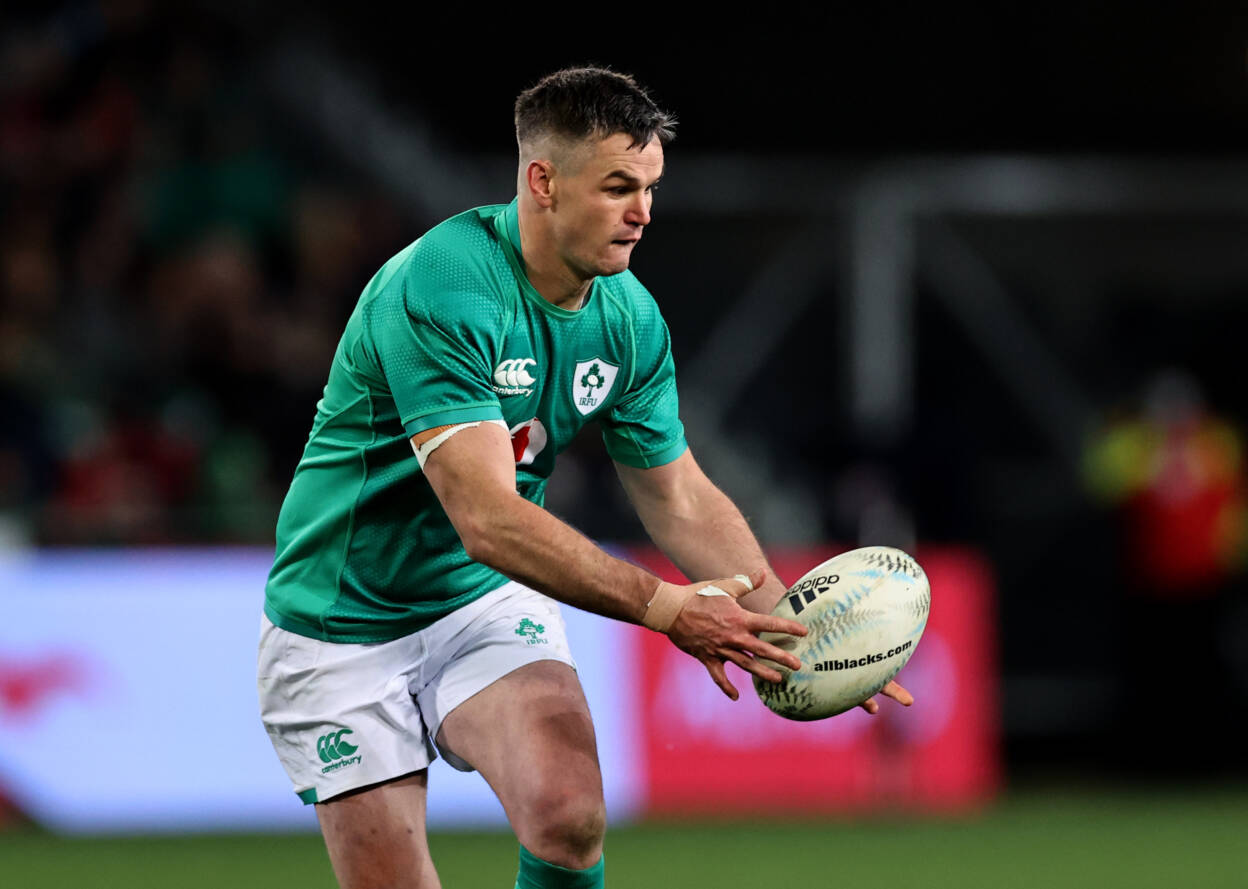 Although mindful that it was far from perfect, Sexton felt that last week’s performance and the way they closed out the result is a sign of their improving form in games away from their Dublin fortress.

Giving a sense of the mindset heading into such a crunch clash, Sexton, who turned 37 last Monday, is determined that the tourists grasp this gilt-edged opportunity with both hands.

“It doesn’t come along too often. It’s a very special week and you’ve got to embrace it, especially when you get to my age and you know that there are not too many left.

“This is the last tour and you want to make the most of it. All the boys are the same. They know that most of them will never be back in New Zealand and we want to do something special, but at the same time we know how difficult it’s going to be.

They are a top quality side. They didn’t play their best last week and I’m sure they will have plans for their performance to improve and we need to find the same.

“At the end of the day it’s another game, but in some ways it’s not and you’ve got to sort of acknowledge that and talk about it because you hear teams when they get to, say, a World Cup final, they say it’s just another game but it’s not.

“No one feels like it’s just another game. You’ve got to acknowledge it and talk about it and make sure that you get all those things out on the table so that by kick-off time you have nothing bottled up.”

Whatever happens at a sold-out Sky Stadium tomorrow, the tour puts Ireland in good stead heading into a Rugby World Cup year. This week’s victory over the Māori All Blacks showed the growing depth, a talented group of young players striving for international honours.

“We have learned some good lessons over the last 18 months, especially in tough away venues – Paris, Eden Park in the first Test – and I think we didn’t put it all together last week.

“There’s still plenty that we need to work on but (we) are much improved away from home on this tour.”

Sexton added: “Win, lose, draw, whatever happens on Saturday, next season we will start afresh and improve on whatever we achieve on Saturday.

“So if we have a great performance and we win, we need to improve, because it’s a World Cup year and other teams are going to evolve.

“Other teams are maybe tinkering and doing different things. Yeah, that’s the biggest lesson we need to take out of the 2018/2019 scenario.”

Both teams are hoping to avoid a repeat of the weather from the Māori All Blacks match on Tuesday. The rain that night made handling particularly difficult and an unpredictable wind played havoc with conditions for the kickers. 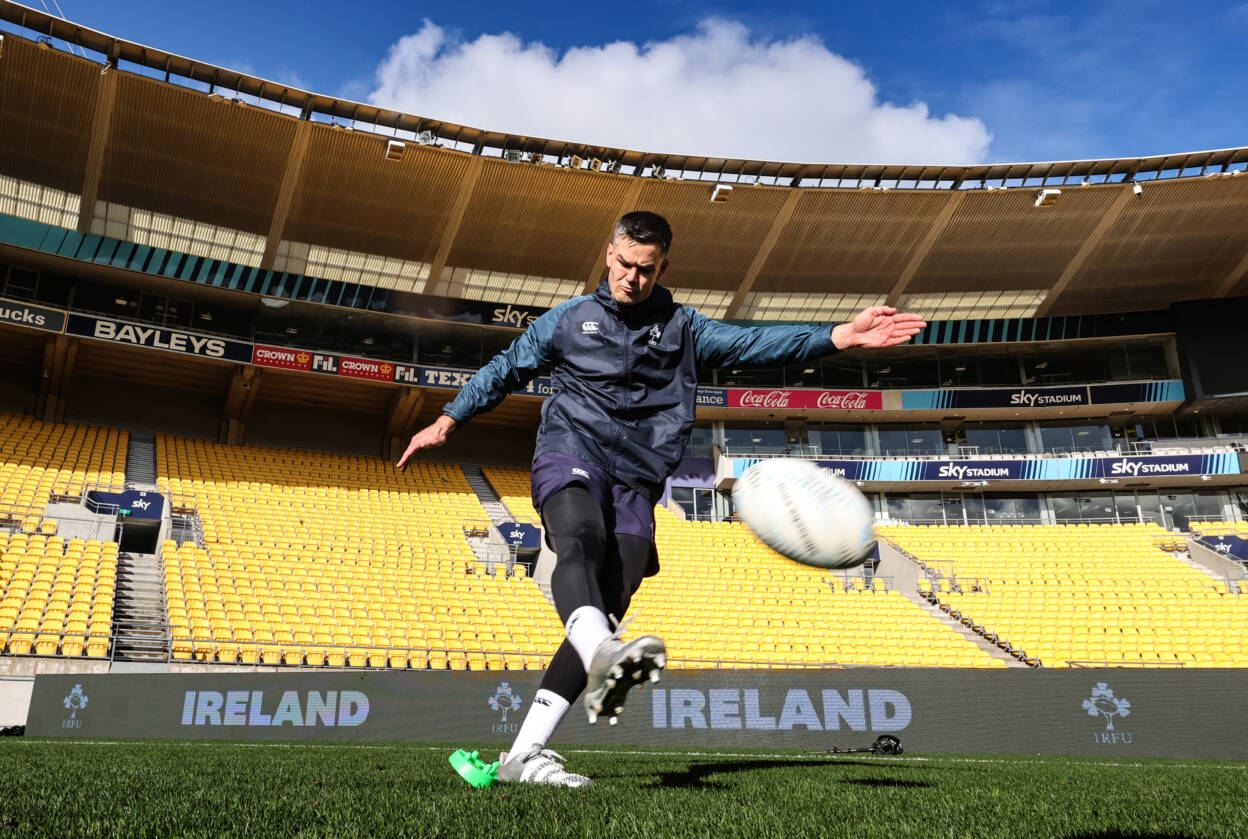 Sexton got a chance to practise his kicking at the venue earlier on today, having previously played there in Ireland’s 2011 Rugby World Cup quarter-final loss to Wales and in the Lions’ second Test win over New Zealand in 2017.

“I’m not sure it (the weather) is due to be so bad on Saturday but from what I gather from different people it is rare that you get a calm night in there, so we will just have to prepare for it,” explained the Dubliner, who is six points shy of scoring 1000 points for his country.

“‘Frawls’ (Ciaran Frawley) obviously kicked some really good kicks on Tuesday. I think it’s a case of just kick it down the middle and hope that it’s a good enough strike to hold. He did that really well the other night.

“I think the only people who look out the window on the day of the Test match are hookers, 10s and maybe nines, depending on how they play the game.

“For others, the conditions have no bearing. Some of the forwards didn’t even know that it was windy the other night! Look, it can be difficult in there, but I have played there when it hasn’t been too bad. We will see what we are presented with on Saturday.”