Enniscorthy and Skerries, Division 2C’s top two finishers, will fight it out for promotion this Saturday after both striking late to survive the first round of the play-offs.

Tullamore and Bangor were on the cusp of two upset wins at Alcast Park and Holmpatrick respectively, but the home sides pulled it out of the bag with Nick Doyle’s late try doing the damage for Enniscorthy in a tense 12-9 victory.

Tullamore silenced the home crowd by taking a 9-0 half-time lead, backed by a strong wind. Scrum half Conor Dunne signalled their intent by landing his first kick from the halfway line.

The visitors’ scrum got on top, allowing Dunne to double their advantage, and while Ben Kidd and Arthur Dunne got the Enniscorthy back-line firing at different stages, Tullamore scrambled well in defence to keep them out.

A third well-struck penalty from Dunne put nine points between the teams, and Tullamore’s defence on the resumption soaked up the pressure as Enniscorthy began to control possession and territory and make inroads.

‘Scorthy’s persistence paid off on the hour mark when prop Angelo Todisco crossed following a gruelling set of attacking phases. Out-half Kidd converted to make it a two-point game.

The Tulliers, who had an excellent performance at lock from Conor Kelly, went close through full-back Brian Geraghty, who was tackled just short of the line, before Enniscorthy broke downfield with menace.

They were forced into touch but stole the resulting lineout, chipping away before centre Doyle found enough of a gap to score a priceless try – his 13th of the league campaign – and send Ben Manion’s charges through to the decider.

Speaking afterwards to South East Radio Sport, Australian Manion said: “It was certainly a lot tighter than we thought. The weather wasn’t great for us today, there was a really strong wind. Tullamore were very good for their 9-0 lead at half-time.

“We were a little indisciplined and they took their chances well. We said at half-time that we’d get a number of opportunities, we just had to be patient and take them when they came along. It was tighter than we would have liked, but we got there in the end.

“Skerries now, I think it’s the final that everyone thought would happen earlier on through the season. It’s two teams that play pretty expansive rugby, we both want to throw the ball around.

“Hopefully we get the weather next weekend and we put on a good show. We’ll just finetune what we do (in training), there’s a few battered bodies so we might have lost one or two. But business as usual for this week.” 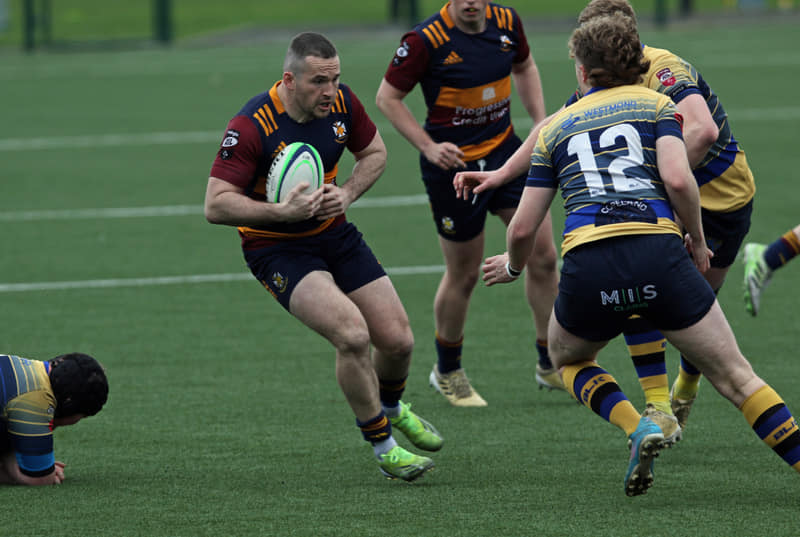 Bangor could hardly have done much more, scoring four tries on the Goats’ 3G pitch, yet Skerries ground out a last-gasp 32-29 triumph thanks to a try from replacement Sam Deering right at the death.

Bangor’s strong start at Holmpatrick was crowned by a Sam Storey try in the corner, the winger set free by Conor Lusty’s determined run and offload. Gareth Millar mustered a brilliant conversion into the wind for a 10-3 lead.

This promotion semi-final developed into a superb contest, crucially though a few scoring chances were left behind by Bangor. Ronan Mulcahy landed his second penalty for Skerries in the 15th minute.

The hosts closed out the first half with their opening try, centre Colin Doyle dotting down at the end of a sharp attacking phase for full-back Mulcahy to convert.

However, Bangor had the wind behind them in the second half and number 8 Mike Weir barged over for an early try, converted by Millar to wrestle back the lead at 17-13.

It was nip-and-tuck for the remainder, although Tom Rock’s men did widen the margin to nine points on the hour mark. Pacy full-back Daniel Young stung Skerries with a terrific intercept try from his own 22.

Crucially, the home side capitalised on a Bangor error at the restart, turning a loose ball into a well-taken unconverted try for winger Oisin McKey. 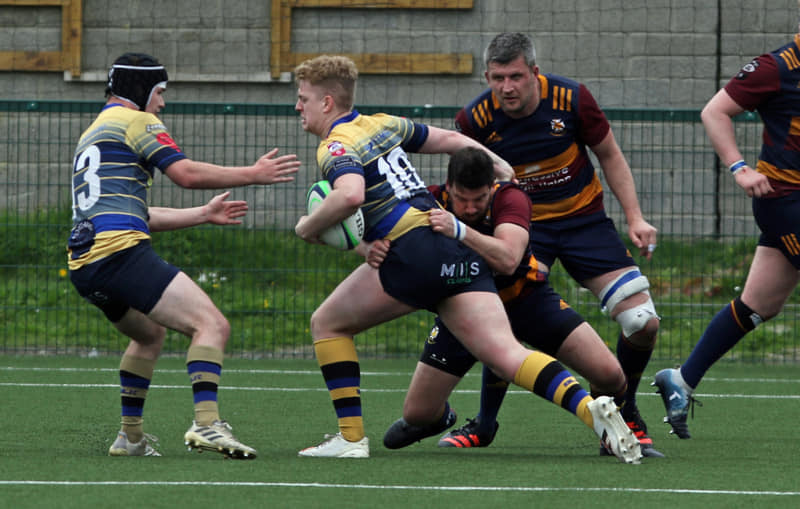 Skerries began to string together repeated attacks, forcing penalties to pin Bangor back and a quick tap led to replacement scrum half Shane Murphy crashing over with five minutes remaining.

The 25-22 scoreline barely lasted a couple of minutes, as impressive Bangor centre Lusty bursting over for a converted try that his performance deserved. Suddenly, Skerries were four points in arrears again.

Derek O’Sullivan’s second-placed side showed commendable coolness under intense pressure to work their way back into scoring range, brilliantly keeping the ball alive with the clock very much against them.

Ross McAuley, Ross Halligan and George Harrington all made dents with their carries before Derring forced his way over. Mulcahy made certain with the conversion, allowing the big home crowd to celebrate with a mix of delight and sheer relief.

Meanwhile, Clonmel take a 33-17 lead up to Judge’s Road for the second leg of their relegation play-off against City of Derry. The south Tipperary club enjoyed a dream finish to the game, scoring 15 points in the final 10 minutes.

Luke Hogan, who bagged a brace of tries, touched down to spark Clonmel’s late surge. His own break led to Greg Carroll’s 75th-minute converted score and Dylan Cadogan tagged on a closing penalty.

Two well-executed moves off scrums in the hosts’ 22 saw Derry move into a 17-12 half-time lead, with David Lapsley and Paddy Blennerhassett both bursting through to score from strong runs.

Centre David Graham’s yellow card for a high tackle was the beginning of Derry’s undoing. Two Cadogan penalties edged Clonmel back in front and their late spurt puts them in a strong position for their final outing of the season.

Richard McCarter’s Derry team are hoping to turn the tie around with a big performance at home this weekend. They have won their last three games at Judge’s Road with an average winning margin of just under 11 points.