Dublin University won their first Colours three-in-a-row since 1991 after overcoming UCD 34-27 at a wet College Park.

David Ryan’s ninth try of the Energia All-Ireland League season was central to UCD’s strong start, but they trailed 17-13 at half-time with James Tarrant and Cian Reilly both in the sin bin.

Trinity’s maul was a key weapon, setting up tries for Mark Nicholson in each half. Munster scrum half Paddy Patterson sniped clean through from a ruck to keep UCD in the hunt at 24-20 down.

However, an O’Kennedy penalty steadied the ship for Tony Smeeth’s side before a brilliant left wing break from Ronan Quinn, coupled with a smashing offload from Leinster’s Rob Russell, teed up Luis Faria to release O’Reilly for the try-line.

It could be a vital try in the context of Trinity’s season – they are temporarily up to fourth in the Division 1A table ahead of tomorrow’s other penultimate round games – and UCD’s only consolation was a late Bobby Sheehan score. 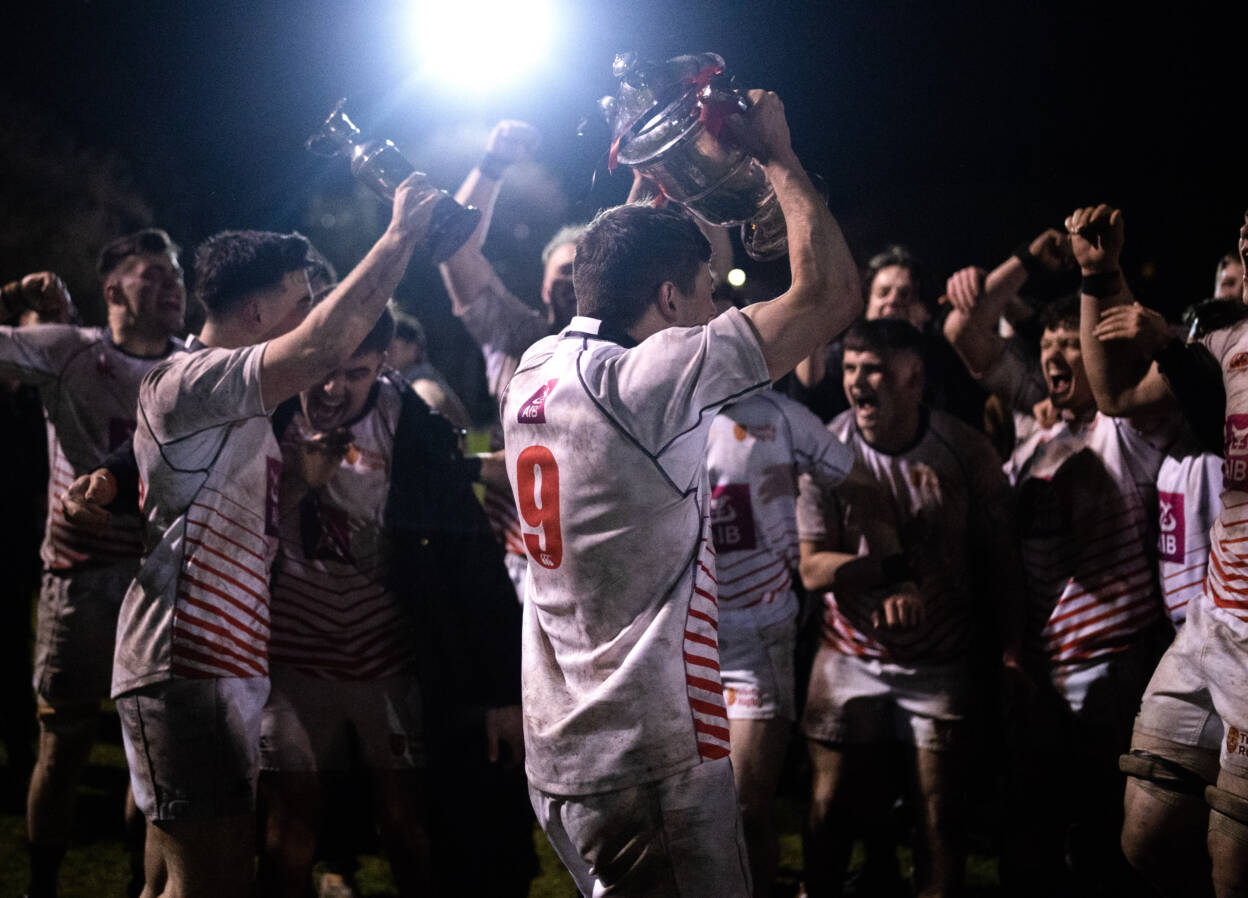 This was the first Colours match to take place since April 2019. The 2020 and 2021 clashes were cancelled due to the Covid-19 pandemic, with Russell and current Leinster and Ireland star Dan Sheehan both touching down for Trinity in their 18-12 victory in Belfield three years ago.

Fresh from playing for Leinster against Connacht last week, UCD’s Chris Cosgrave nailed a second-minute penalty to punish a high tackle from Faria on Dylan O’Grady.

UCD made all the early running against a nervy Trinity, with Patterson and centre Ryan, a regular try scorer for College, both threatening around the fringes.

After the hosts had coughed up possession from a forward pass, James Culhane, one of UCD’s returning Ireland U-20 Grand Slam heroes, carried up close before Ryan evaded a tackle to score to the right of the posts. Cosgrave converted for a 10-0 lead. 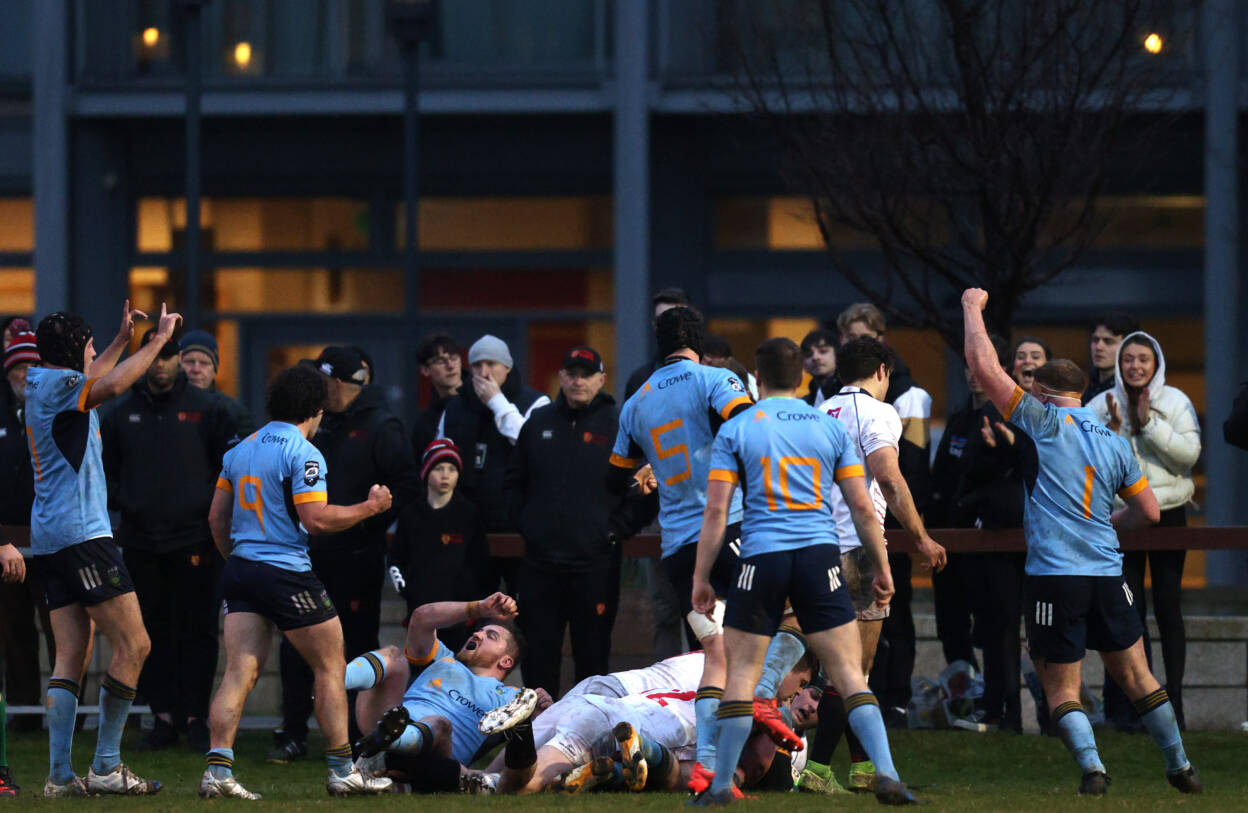 Alan Francis lifted Trinity by forcing a breakdown penalty, and once they reached the UCD 22, two maul penalties preceded a well-taken try from hooker Nicholson courtesy of another powerful lineout drive.

O’Kennedy’s conversion from the left was followed by a Cosgrave penalty for a 13-7 UCD lead, rewarding a sharp attack involving number 8 Culhane and his captain Jack Ringrose.

However, UCD’s discipline was poor approaching the interval, with Tarrant and Reilly both sin-binned either side of an O’Kennedy penalty.

A Francis turnover penalty was tapped quickly by O’Reilly who kicked through, but UCD openside Reilly’s late hit on the scrum half saw him carded. The forward pressure set up Francis to lunge over from a close-in ruck, with O’Kennedy converting. 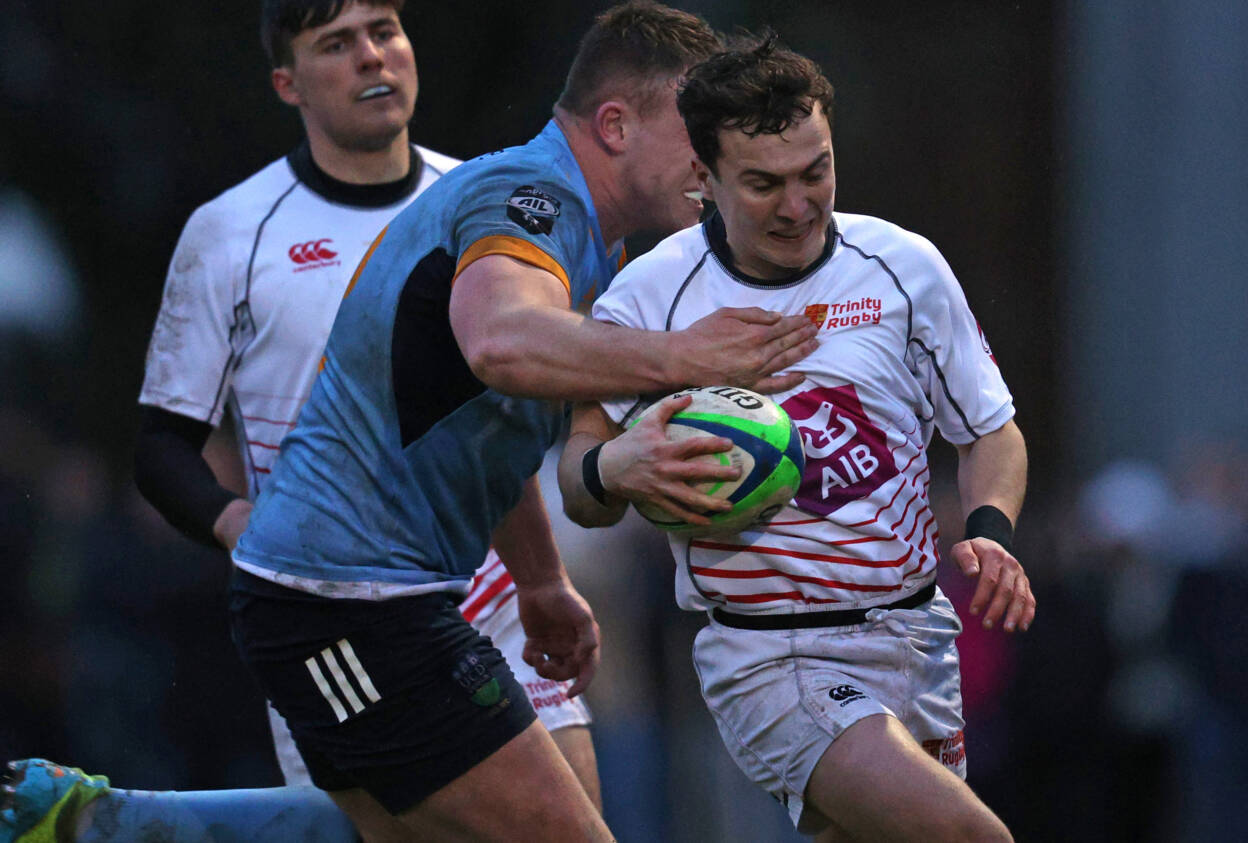 Six minutes after the break, a clever kick from O’Reilly, the player-of-the-match, had Trinity licking their lips at another lineout opportunity. Nicholson was duly driven over again with O’Kennedy crisply adding the extras.

UCD responded well and Sean O’Brien was held up before Patterson scampered over beside the posts. Replacement Jack Boyle’s big clearout paved the way for the scrum half to race over from the edge of the Trinity 22. Cosgrave converted.

Trinity’s pack threatened from their reliable maul soon after, out-half O’Kennedy knocking over a penalty to make it 27-20 just a few phases later. 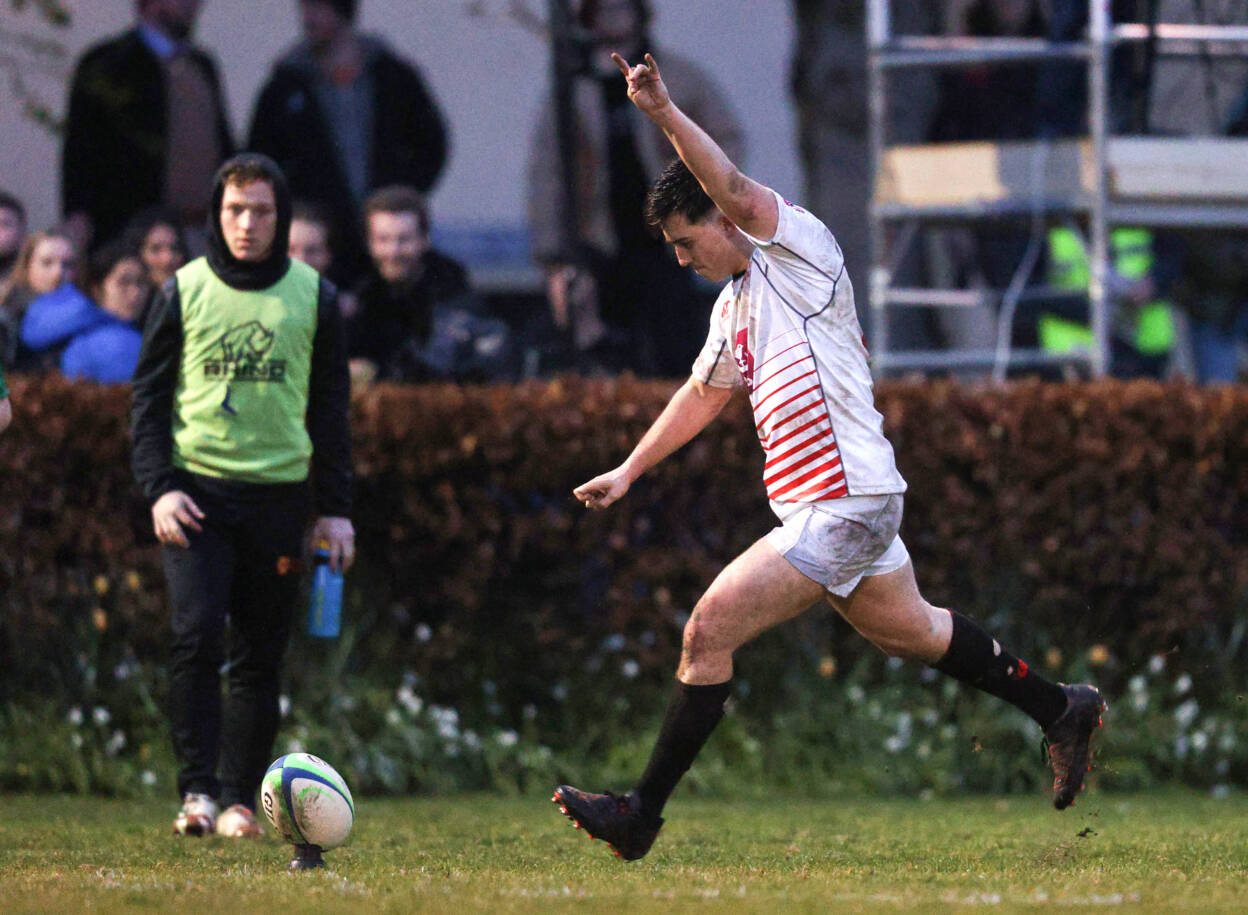 Into the closing stages, the home side finally showed their ability with ball in hand, working Quinn into space before the supporting Russell broke Cosgrave’s tackle and timed his offload perfectly to link with Faria who fed O’Reilly to gleefully finish off the move.

O’Kennedy made it six successful kicks on the night, stretching the lead out to 34-20, but UCD were far from finished and full-back Cosgrave notably finished with a dozen points.

He converted hooker Sheehan’s close-range try in the dying minutes, a tense conclusion seeing Trinity lose both Russell – for a no-arms tackle on Ryan – and replacement Cormac King to the bin.

Nonetheless, Smeeth’s play-off hunters knuckled down in defence and deservedly came out on top, retaining the Colours crown and climbing above both Young Munster and Cork Constitution who meet tomorrow in Limerick. 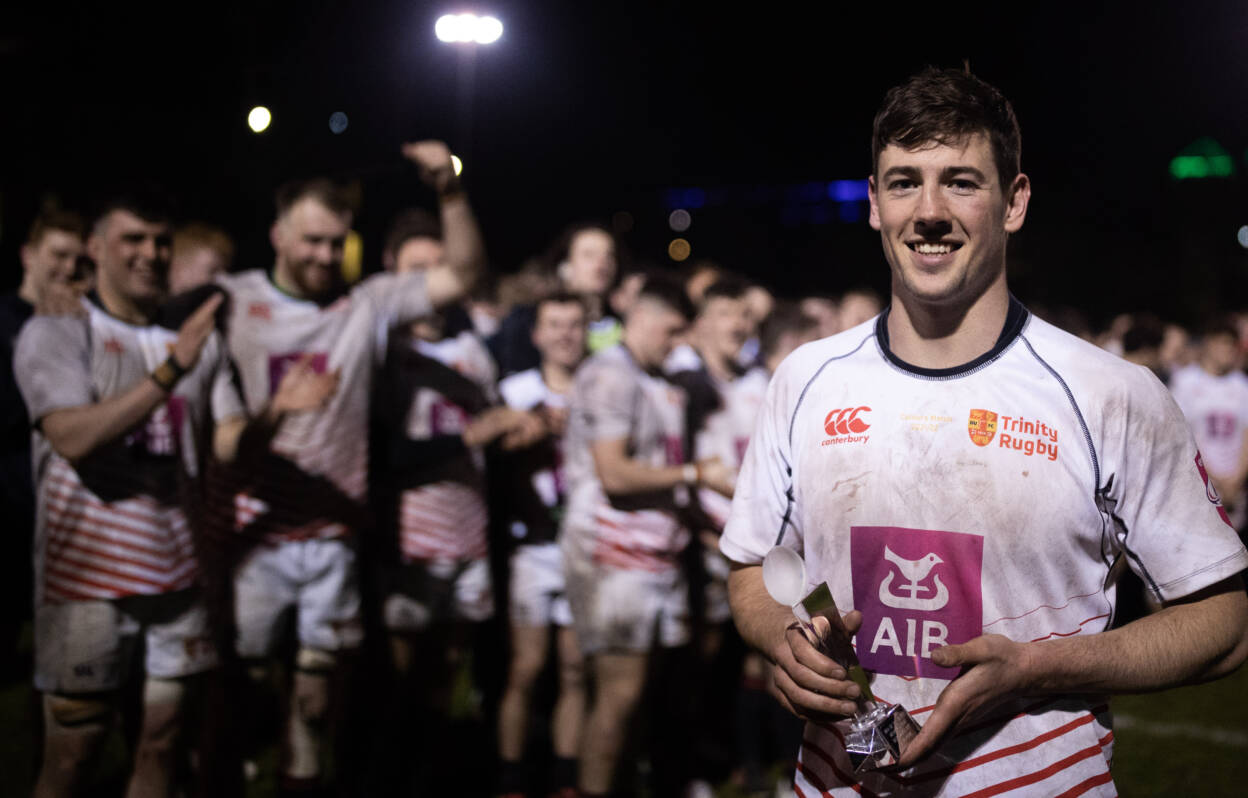