Ireland head coach Andy Farrell has said that Mack Hansen’s selection for the Wales game is just reward for the way he has applied himself in training over the past few weeks.

One of just two uncapped players in the 37-strong squad for the Guinness Six Nations, Hansen has been given a vote of confidence by Farrell for Saturday’s first round fixture at the Aviva Stadium (kick-off 2.15pm).

Having previously spent time with the squad during November’s Autumn Nations Series, the Connacht winger comes into an exciting back-three alongside Hugo Keenan and Andrew Conway.

A native of Australia with a Cork-born mother, Hansen has lit up the United Rugby Championship this season with a number of eye-catching performances in the green of Connacht.

Yet it is the way he has seamlessly adapted to the testing environment of an international camp that has impressed Farrell the most.

“He’s a smart rugby player, he makes things happen. He knows how to get himself involved in the game. He’s got a good skill-set across the board,” stated Farrell, speaking at today’s team announcement press conference.

“It’s tough when you first go into international camps, but the ones who do it best and hit the ground running end up getting to a good few caps straight away.

“They’re the guys that are able to be told once or maybe twice and pick up things straight away. Mack has certainly done that.”

Outside of handing Hansen his Ireland debut, Farrell’s selected team contains 13 members of the side that defeated New Zealand in memorable fashion at the Aviva Stadium in the autumn.

The only other change sees Tadhg Beirne, who was introduced 47 minutes into that 29-20 victory over the All Blacks, replacing Iain Henderson in the second-row.

Farrell is glad to have a sense of continuity as he not only looks to challenge for silverware in this year’s Six Nations, but also builds towards the 2023 Rugby World Cup in France.

It’s great, camp was fantastic. We certainly prepared very well and there is a reason for that, because of continuity, etc. People coming into camp and hitting the ground running.

“Very happy with how things have gone so far. We keep on building for the rest of the week and ready to perform on Saturday.”

While Farrell has been blessed with a relatively clean bill of health in comparison to his opposite number Wayne Pivac, he did reveal that Keith Earls and Robbie Henshaw were ruled out of contention to face Wales through injury.

“Earlsie isn’t fit for this weekend. He had a hamstring strain yesterday and he has gone for a scan today. We’ll know more about that later on today, but he’s out.

“Robbie had a little bit of a niggle on an adductor towards the end of last week. A good few days of rehab has got him back up to speed again. He missed a couple of sessions and that allowed the other three guys to get through their work.

“Robbie is fine, but the rehab has done him good. Bundee (Aki) and Ringer (Garry Ringrose) get to start.” 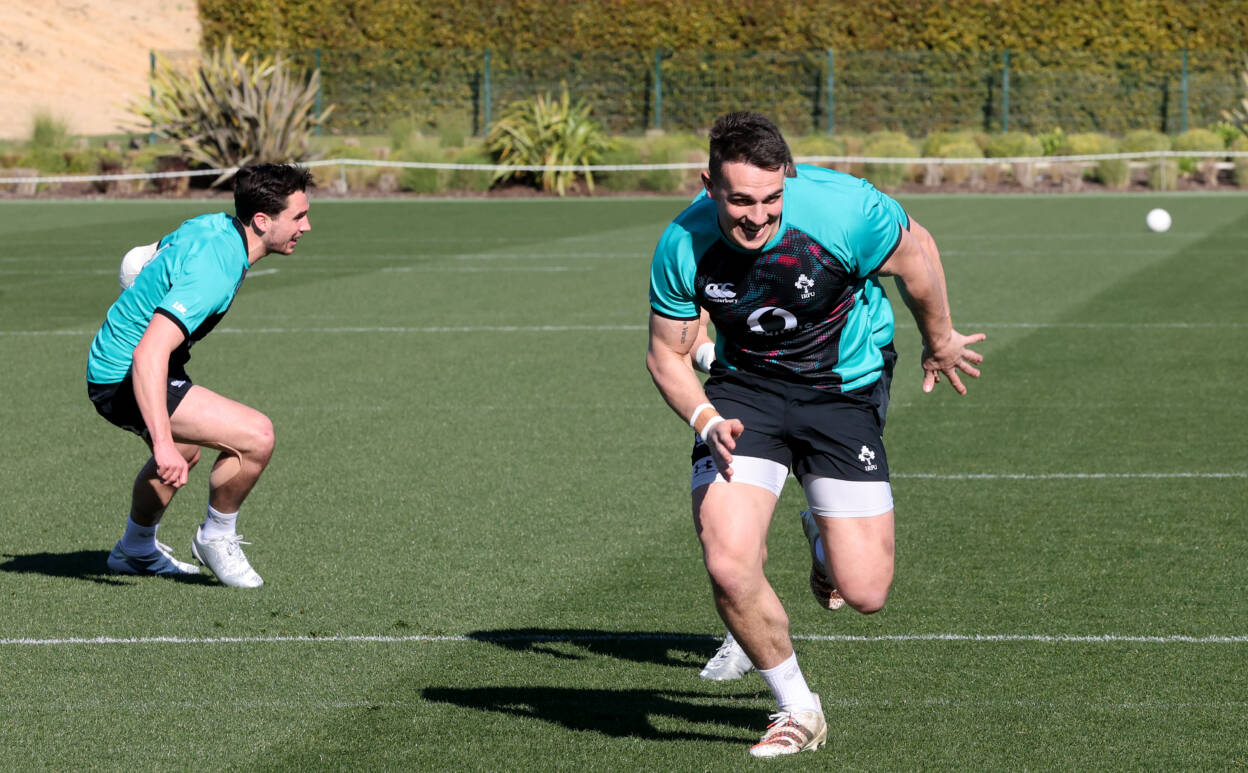 In the absence of Henshaw, it is Ulster centre James Hume who will provide the back-up to Aki and Ringrose amongst the replacements.

Whereas Hansen will take his first steps into the Test arena on Saturday, Hume picked up his only senior cap to date in last July’s victory over the USA at the Aviva Stadium.

He missed out on selection for the three games Ireland played in the autumn – he was part of the extended squad for that particular window – but Farrell has been delighted with the way the 23-year-old has responded to this personal disappointment.

“He has certainly buckled down. Gone away from the Autumn Series and put his best foot forward, to get back into the room for the Six Nations.

“His knowledge of how to get up to speed for somebody who is very young, as far as international experience, has helped himself massively. Certainly in the first 10 days of training.”

Elsewhere in his matchday 23, Farrell was left with the dilemma of whether to pick Joey Carbery or Jack Carty as the out-half cover for captain Jonathan Sexton.

In the end, the Wigan native elected to keep faith with Carbery, who has played some part in each of Ireland’s last five Test matches. The Ireland head coach added:

Obviously Joey knows how we operate, because he’s been in camp quite a bit through the summer and the autumn, etc.

“Then you look at what you need off the bench and obviously he covers quite a few positions there. That all adds up to the picture.

“Obviously throughout the campaign, and I know Joey hasn’t played at all really since the injury, but when do you get these people back up to speed? He’s fit. The pressure we’ve put on ourselves at training etc., he has excelled at. He’s ready to go.”