Claffey scored two second half tries in a high-quality encounter, which keeps Blackrock top of the table and well on course to contest next month’s Energia Women’s All-Ireland League final.

UL led early on, Eimear Considine colliding with Natasja Behan but managing to get her hands on the ball to ground it from Nicole Cronin’s well-weighted kick in behind.

Blackrock’s Meabh Deely, who had a near miss for a try, kicked smartly to pin Bohs back on their line. The pressure eventually told when hooker Emma Hooban barged over on the half hour mark.

It was nip and tuck up to half-time, ‘Rock just edging into a 8-5 lead as Hannah O’Connor’s reliable right boot rewarded Maeve Óg O’Leary’s efforts at the breakdown.

Blackrock had the better of the third quarter, O’Connor’s counter-rucking leading to her second penalty goal and Claffey crashing over following a fine intercept run by replacement Maeve Liston.

Try number three followed in the 51st minute, Dorothy Wall looping a pass out for flanker O’Leary who showed a clean pair of heels to the cover, speeding in at the left corner to make it 21-5.

Some nice footwork off the back of a ruck allowed UL replacement Clodagh O’Halloran to pull a try back, before Offaly native Claffey scored one of the tries of the season from inside her own half.

The ‘Rock skipper jumped to intercept a Cronin pass, near her own 10-metre line, shrugged off both Rachel Allen and Enya Breen and sprinted clear from halfway in superb fashion. Jackie Shiels added the conversion.

The Red Robins roared back with a scrum-inspired penalty try, but a well-struck Deely penalty had ‘Rock 14 points clear before O’Halloran’s second score – following a yellow card for Hooban – secured a bonus point for the hosts.

Railway Union moved back into second place after edging out Old Belvedere 11-10 in a titanic Dublin derby.

The returning Deirbhile Nic a Bhaird was sprung from the bench and crashed over to make it a one-point game, but a first Top Four triumph remained just out of ‘Belvo’s reach.

Suttonians won their top of the table clash with Galwegians in the Conference. Play-making centre Catherine Martin and scrum half Emily McKeown (2) starred in attack during a 26-19 bonus point triumph. 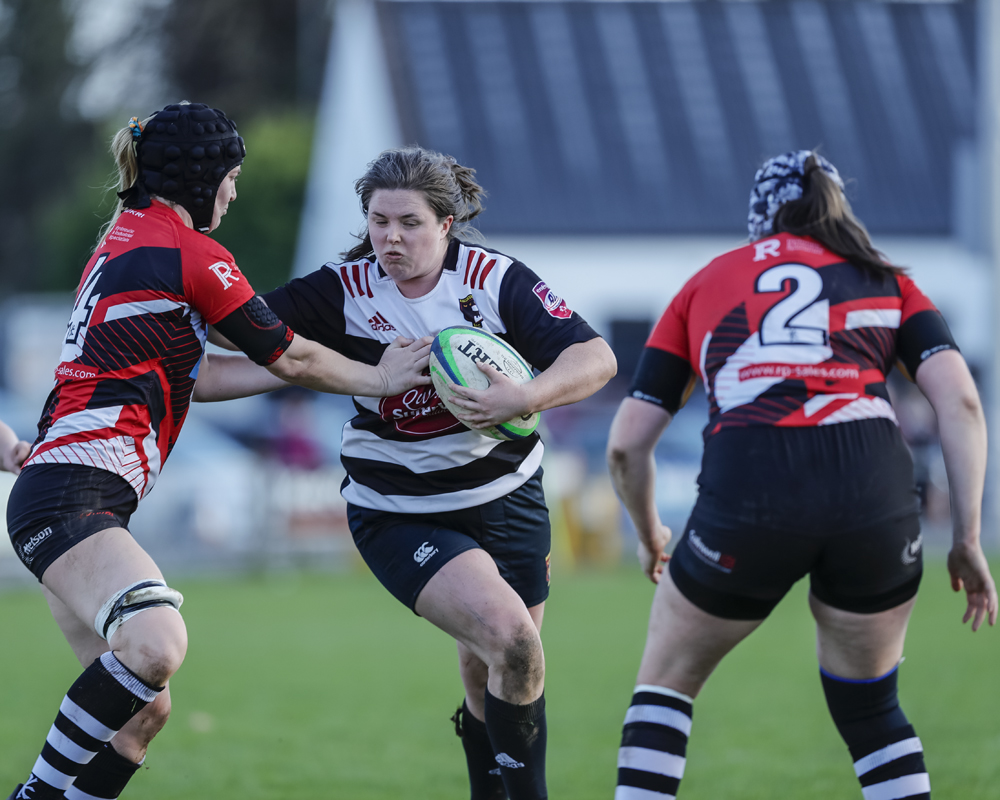 In-form flanker Lisa-Marie Murphy bagged a brace of tries for ‘Wegians, who drop down to third place following Ballincollig’s well-judged 22-10 success at home to Cooke.

Fiona Hayes’ ‘Collig fell behind early on, but took just 43 minutes to register their bonus point thanks to Heather Kennedy and Clare Coombes’ fourth tries of the campaign.

Replacement Sinead O’Reilly and Roisin Ormond also dotted down for the Cork side.

Despite missing star full-back Ella Roberts, Wicklow earned their first ever AIL away win when pipping Malone 13-12 at Gibson Park. Beth Roberts’ second half penalty was the key score, on the back of an earlier Emma Curran try.