Clontarf are top of the Christmas tree in Energia All-Ireland League Division 1A, having impressively seen off Garryowen 17-0 at Dooradoyle.

Andy Wood’s men did most of the damage in the first half with a try after just 90 seconds from Cormac Daly, which was followed up by a Tadhg Bird effort.

Busy flanker Max Kearney claimed the third try of the game to give Clontarf their second win of the season on Limerick soil.

Worryingly for Garryowen supporters, Mike Sherry’s side have now slipped to five successive defeats after starting the campaign with four victories from four.

Clontarf signalled their intent right from the off when captain Matt D’Arcy freed his arms in a tackle on halfway before offloading to JP Phelan.

The tighthead prop fed the ball left to in-form lock Daly, who showed magnificent pace and a fine step off his right foot to score a sensational try.

Much of the rest of the opening half was played between the 22s as both sides struggled with the wet conditions.

Eventually, Clontarf found their way into Garryowen territory after Colm Quilligan was whistled up for holding on.

Conor Kearns fired the penalty kick into the corner and after a good defensive maul from the hosts, Angus Lloyd moved the ball to the right to D’Arcy but he was held up just on the line.

Lloyd was quickly onto the ball at the base of the ruck and fired a flat pass that saw Bird go in under the posts. Kearns nailed the conversion to make it 12-0 at the break.

Garryowen offered plenty in attack in the second period, but were consistently let down by mistakes in Clontarf territory.

Wood’s charges found their way into the opposition 22 on 57 minutes once more, with D’Arcy’s delayed pass putting Cian O’Donoghue through the slightest of gaps.

The Light Blues managed to hold off that attack but were unable to stem the next wave with openside Kearney eventually dotting down.

O’Donoghue thought he had bagged the bonus point score late on, yet the try was chalked off by referee Kieran Barry and ‘Tarf had to settle for a well-earned four points. 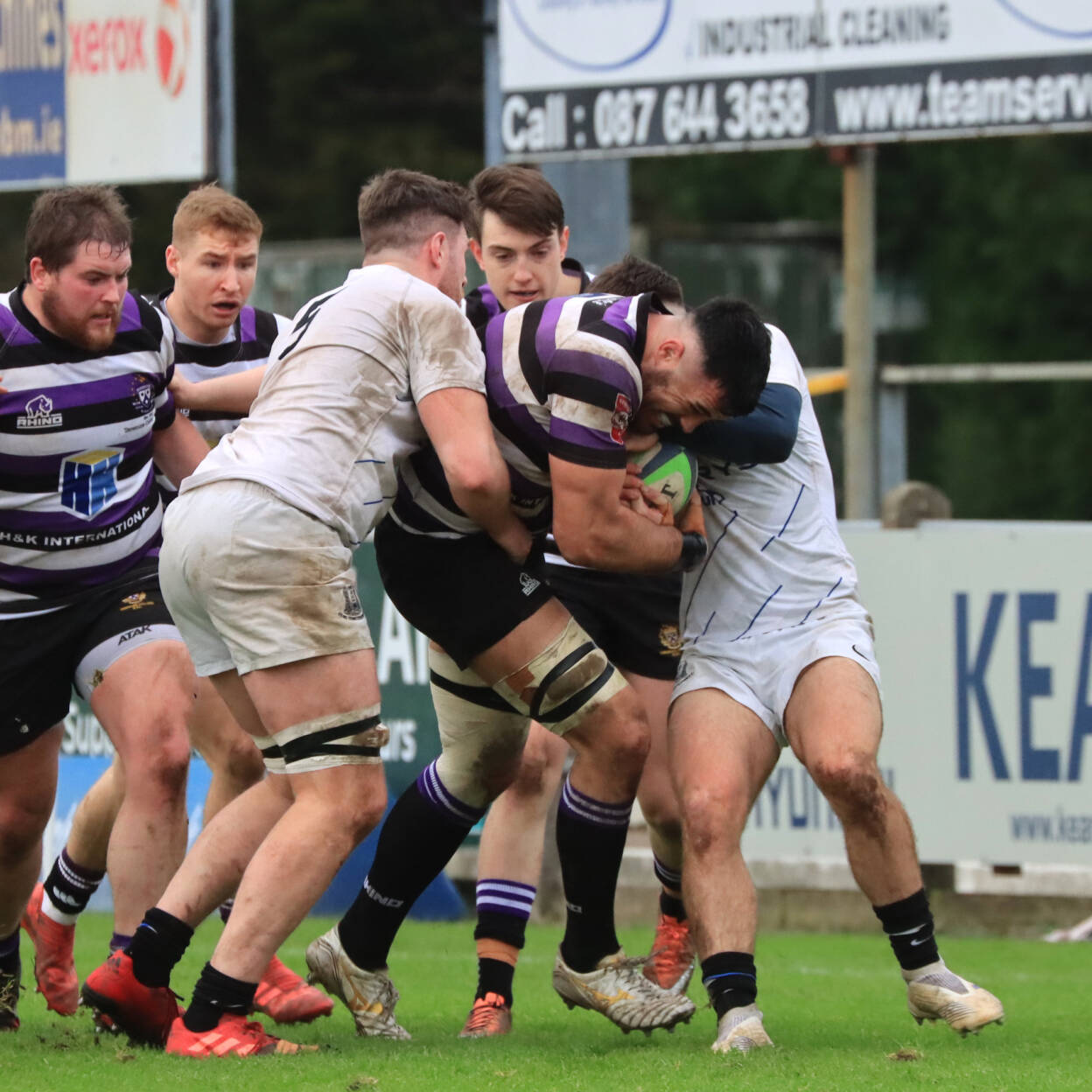 There was controversy at Temple Hill where Cork Constitution missed out on a late penalty try in a 16-12 defeat to Terenure College.

With just three minutes remaining, Paddy Casey’s pass appeared to be knocked on by a stray Terenure hand after Cork Con number 8 David Hyland had done really well to charge down a clearance kick.

Referee Daniel Carson ruled that the action was not deliberate and awarded Con a penalty. Terenure dug deep to defend the resulting maul and a frantic final few minutes to seal a famous victory on Leeside.

Con, who had won their previous five matches, looked to be in a good position at half-time. The teams were level at three points each after the hosts had played into a very strong wind.

Returning captain Aidan Moynihan opened the scoring for Brian Hickey’s side with a 27th-minute penalty. Jake Swaine had hit the post with his first attempt for Terenure, but nailed his second penalty late on to tie things up.

‘Nure were causing problems for Con at set-piece time, but it was their breaking ability which saw them stun Con with the game’s only try, just after the restart. 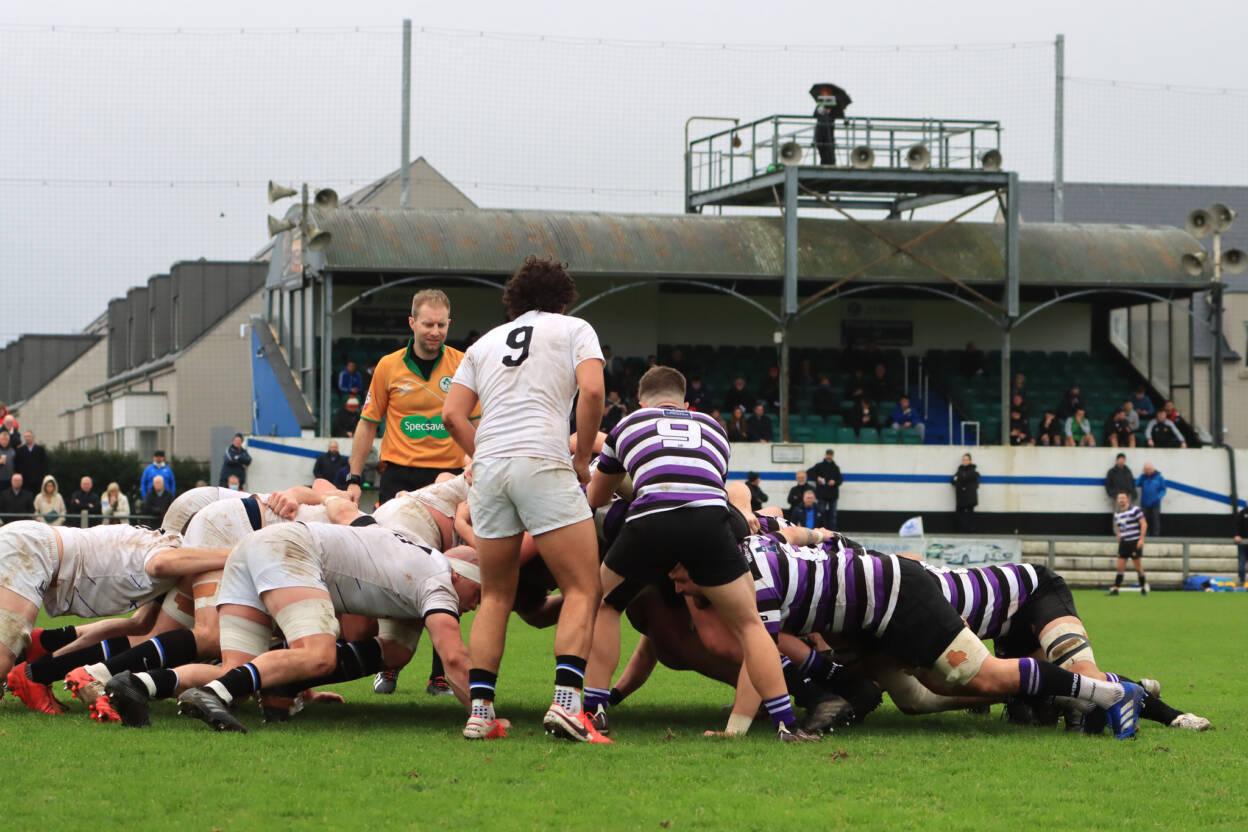 Scrum half Alan Bennie carved open the defence with a fine break, and skipper Harrison Brewer kept the attack going with a strong carry before sending fellow flanker Luke Clohessy over.

Swaine’s conversion was quickly cancelled out by a Moynihan penalty, before centre Peter Sylvester brought Terenure back into kicking range and Swaine delivered three more points.

The goal-kicking winger rewarded another strong ‘Nure scrum with a well-struck penalty, his third of the afternoon to leave Con trailing 16-6.

Incredibly, Con began the final quarter without their two centres. Greg Higgins and Niall Kenneally were both sin-binned in a disastrous eight-minute spell for the defending champions.

Credit to the home side, they showed excellent resilience and managed to turn ‘Nure and put them on the back foot. Two penalties from Moynihan ensured Con had the momentum heading into the closing stages, but their fightback fell just short. Despite a Rob Byrne try right on the final whistle, Young Munster prevailed 18-12 away to UCD as they climbed back up to third place in the table.

Tries from recent debutant Cian Casey and Mark O’Mara steered Munsters to their seventh win of the season, with Dylan O’Grady and replacement front rower Byrne replying for the eighth-placed students.

The visitors got on top during a scoreless opening 25 minutes. Forwards Conor Bartley and Sean Rigney made some good carries and centre Jack Harrington looked dangerous anytime he got the ball.

An Evan Cusack penalty opened their account, and Young Munster piled on the pressure approaching half-time.

Captain Alan Kennedy almost got over the line before the ball was swung wide for Casey, the former Limerick minor hurler, to score in the right corner.

UCD were much-improved on the restart, with full-back Chris Cosgrave starting to have an impact. He broke past a defender and put O’Grady away to convert a two-on-one.

Cosgrave’s conversion closed the gap to 8-7, before Cusack replied from the tee for the Limerick men. They ramped up the pressure again, UCD going down to 14 men due to the number of penalties conceded.

Replacement Donnacha O’Callaghan took a quick tap for Munsters, he was stopped just short of the line but the ball was quickly recycled and replacement O’Mara was soon celebrating under the posts. Cusack converted.

Time was running out for UCD but they did battle back for a hard-earned losing bonus point. Richie Fahy’s chip kick to Ross Deegan made the initial incision, and their patience was eventually rewarded when Byrne scored in the final seconds. 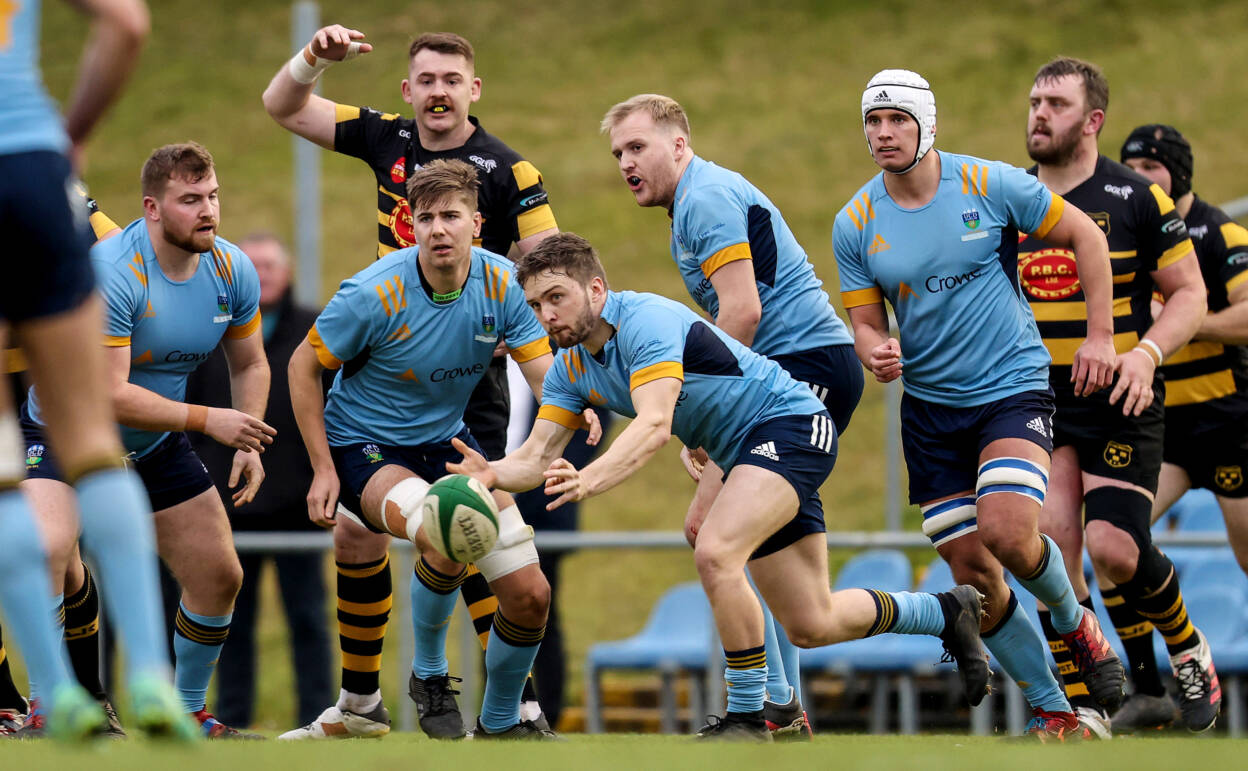 Full-back Greg Hutley did all the scoring for bottom side ‘Hinch, his 49th-minute converted score bringing them level at 10 points apiece.

However, Lansdowne produced a final flourish, working replacement hooker Jamie Kavanagh over for a maul try before Silvester had the final say. 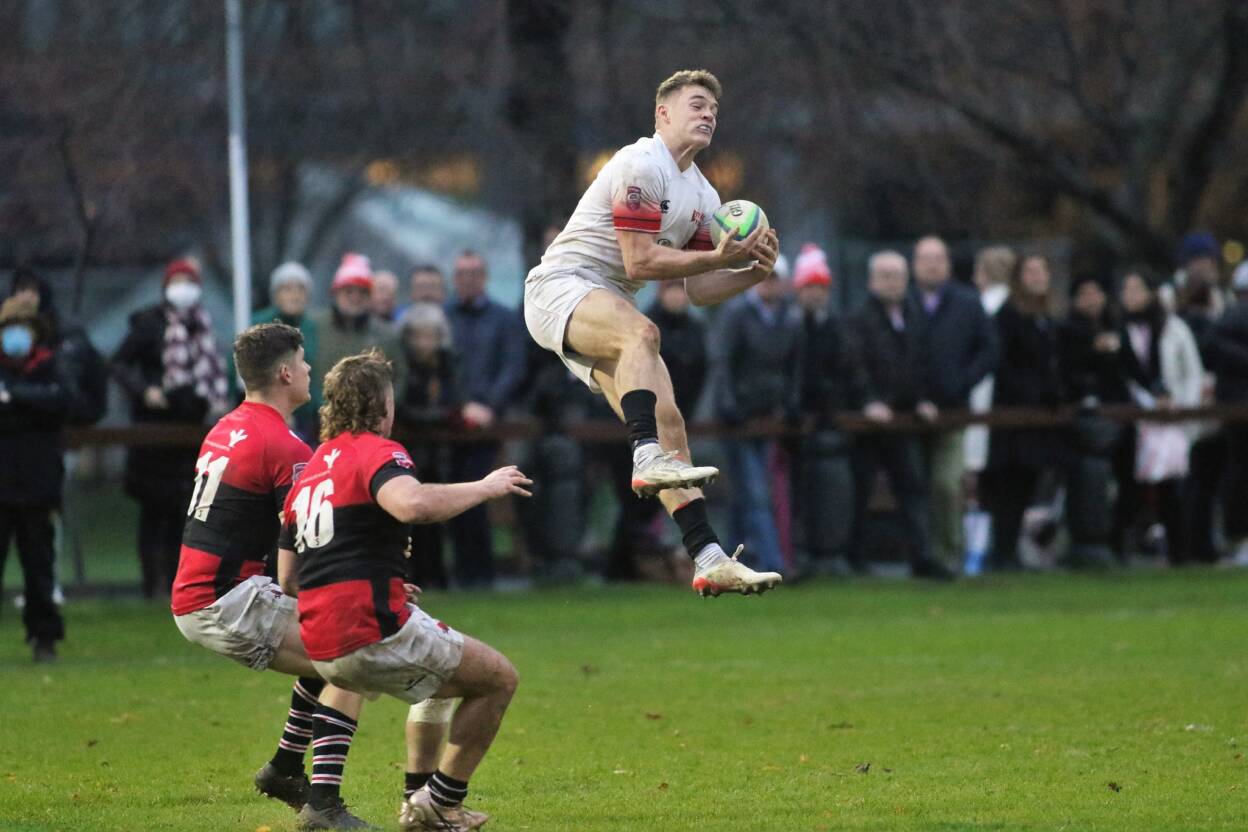 Dublin University retained the Dudley Cup thanks to a runaway 48-8 success at home to UCC. Out-half and captain Mick O’Kennedy starred for Trinity with 21 points, including a show-and-go try during the final quarter.

UCC were without their Munster contingent at College Park, with three of them starting for the province against Wasps tomorrow. Their regular openside flanker, Jack Kelleher, is also a travelling reserve in Coventry.

Still, Neil Lucey’s young guns produced a strong first-half performance and were only 13-3 behind at the interval. Skipper Rob Hedderman landed a central penalty from the 22 to get them off the mark. 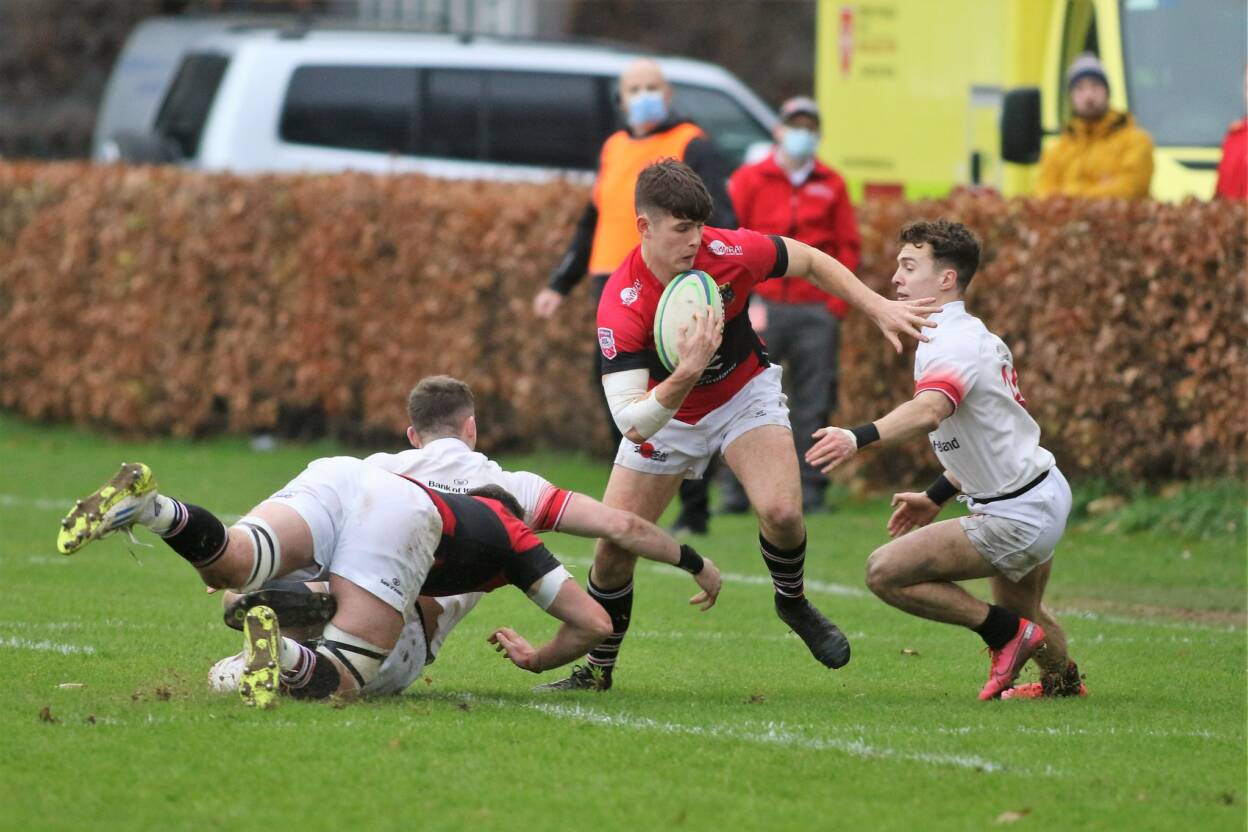 Trinity’s only first half try was finished by Hugh Twomey, following a brilliant 18th-minute break by Leinster’s Rob Russell.

Quick-fire scores from Lee Barron and Marcus Kiely, at the start of the second half, had the hosts in total command.

UCC reduced the deficit to 27-8 following some nice interplay between Eoin Monahan, the scorer, and Timothy Duggan.

Much to the delight of the home crowd, Tony Smeeth’s side had more in the tank and reeled off three more converted tries – Alan Francis’ big carry earned him the bonus point, O’Kennedy sniped over and replacement Aaron Coleman made it a neat half-a-dozen. 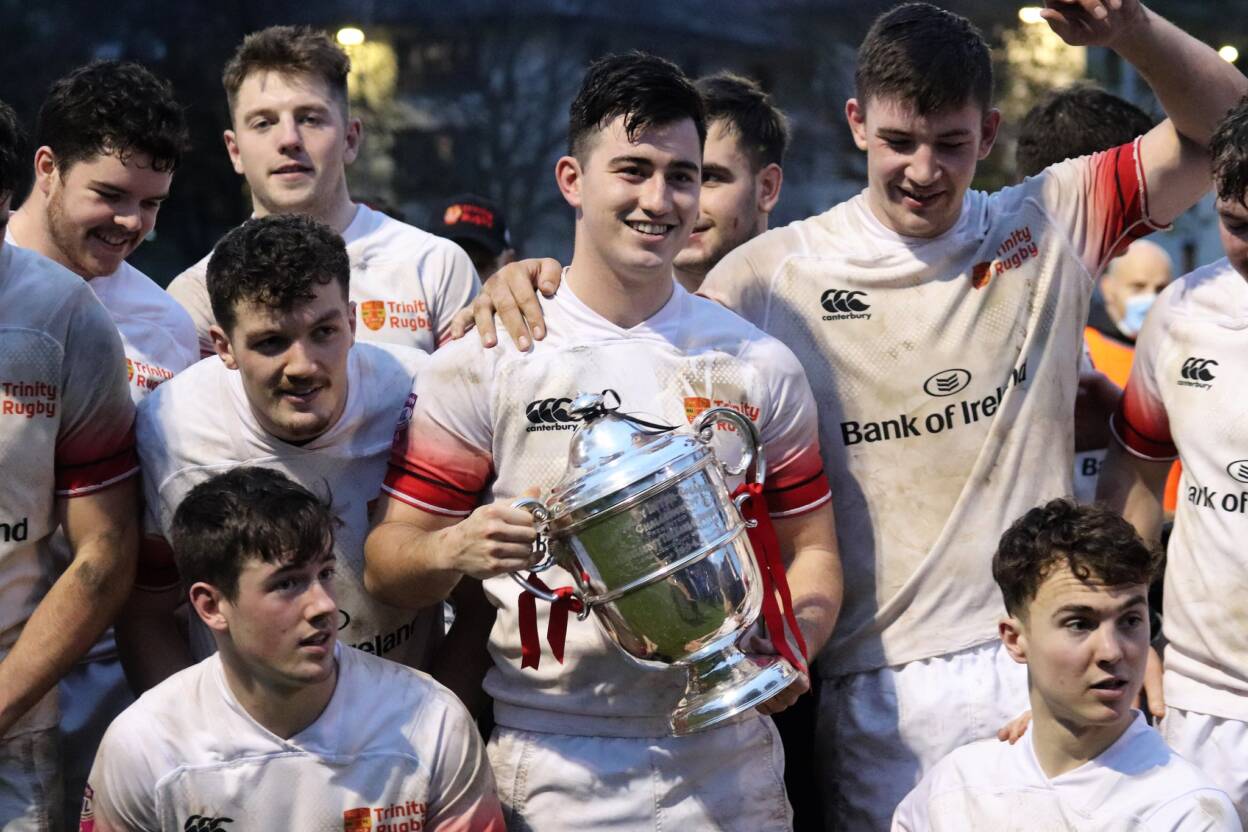