Defending champions and league leaders Railway Union kept up their unbeaten run with a whopping 72-0 victory over in-form Galwegians at Park Avenue.

John Cronin’s charges tallied up twelve tries, including braces for the returning Lindsay Peat, who packed down at number 8, Molly Scuffil-McCabe and Amanda McQuade.

It was a frustrating game for Galwegians who had made an encouraging start thanks to Emma Keane’s smart tactical kicking and their robust first-up tackling.

‘Wegians forced a knock-on to deny Katie O’Dwyer the opening try, and it took a while for Railway Union to find their usual rhythm in attack, with some early handling errors in the windy conditions.

Number 8 Dearbhla Canty earned a turnover penalty to further lift the visitors, while Kate McCarthy showed her breakdown smarts for Railway but the resulting lineout throw from Chloe Blackmore was crooked.

A scrum penalty launched the hosts forward again, Aoife McDermott expertly offloading out of a tackle for flanker McCarthy to burst up into the ‘Wegians 22.

Good hands out to the left put captain Niamh Byrne over in the corner, 13 minutes in, and the same player was first in at the breakdown to thwart what was beginning to look like a dangerous Galwegians attack. 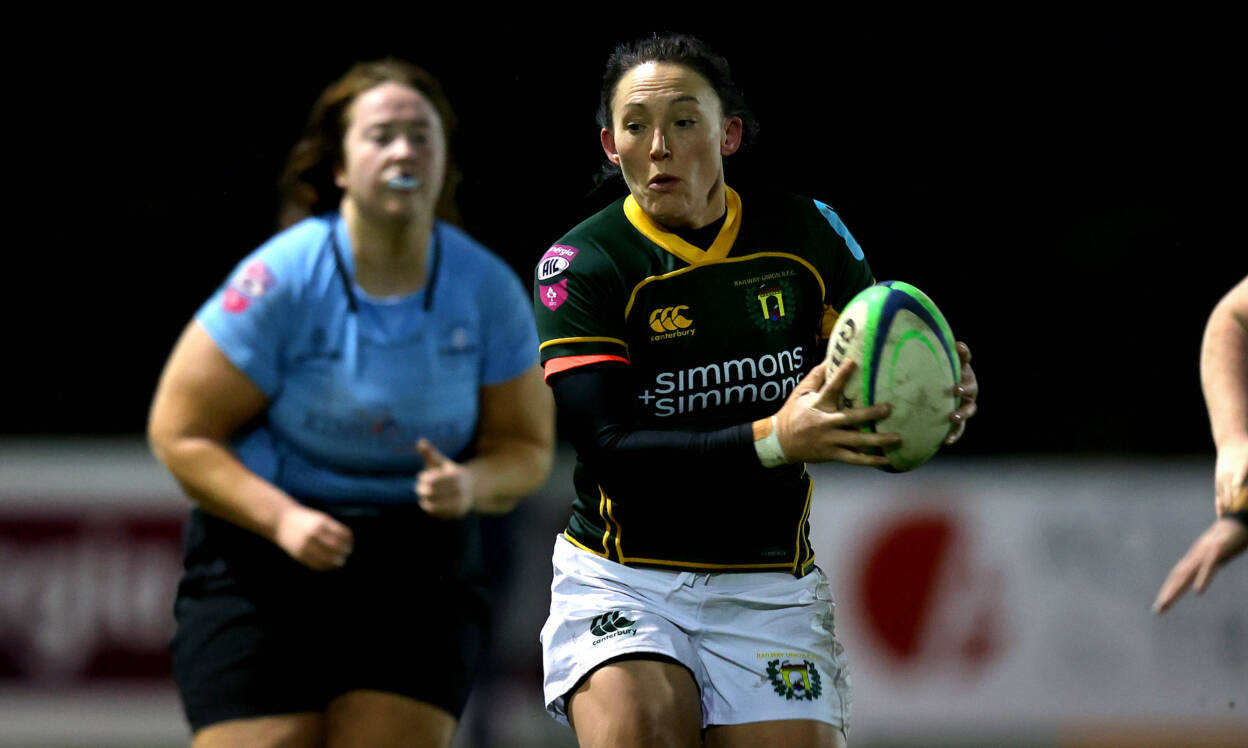 However, the table toppers went up a gear when Peat attacked the blindside of a scrum, charging through a gap and sending a well-timed pass out for Ailsa Hughes to finish off a slick score in the right corner.

10-0 soon became 17-0, full-back Scuffil-McCabe showing her Sevens international pace as she got outside two players and cut in past the cover to score from inside her own half.

Loosehead McQuade registered the bonus point, throwing a dummy to break the line and shrug off the final defender on a pacy surge in behind the posts. Nikki Caughey converted again.

Peat was next over the try-line, driving in low after a very good initial break by tighthead O’Dwyer. McDermott soon gobbled up the metres through midfield, quickly forcing ‘Wegians back on the defensive.

Railway were consistently getting over the gain-line now and nice hands, including a draw and pass from Peat, released Scuffil-McCabe for the left corner, making it 34-0. 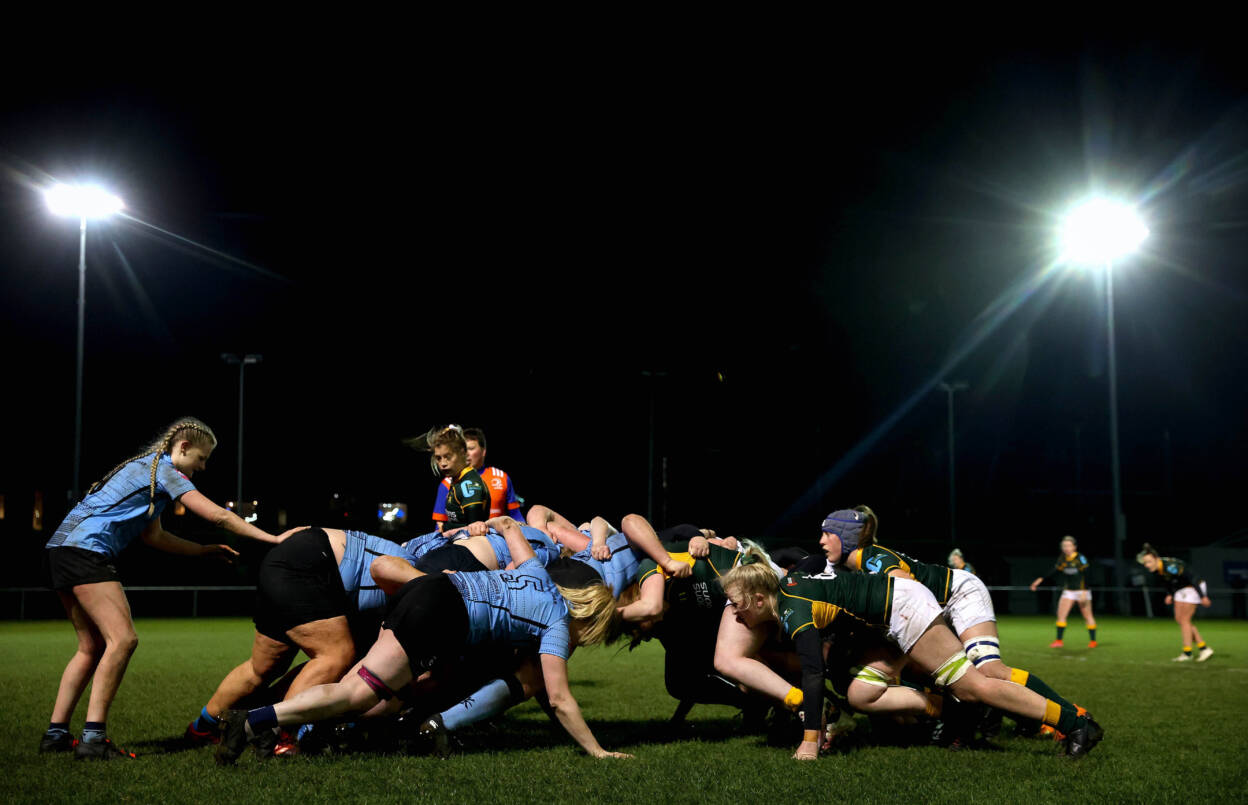 The increasingly-influential Peat evaded two tackles for well-taken seven-pointer on the stroke of half-time. On the resumption, Stephanie Carroll cut in off her right wing to run in a terrific solo score, under the posts.

Caughey converted to stretch the margin to 48 points, and although ‘Wegians showed glimpses of what they can do with ball in hand, Railway continued to beat a path towards the whitewash.

Good footwork and acceleration from McQuade saw her complete her brace, finishing off a prolonged period of pressure that started with a lung-busting run off a midfield scrum from Hughes.

Caughey’s extras made it 55-0, and into the final quarter, hooker Blackmore showed a clean pair of heels to the Galwegians defence with a strong run in beside the posts, using her fend very effectively. 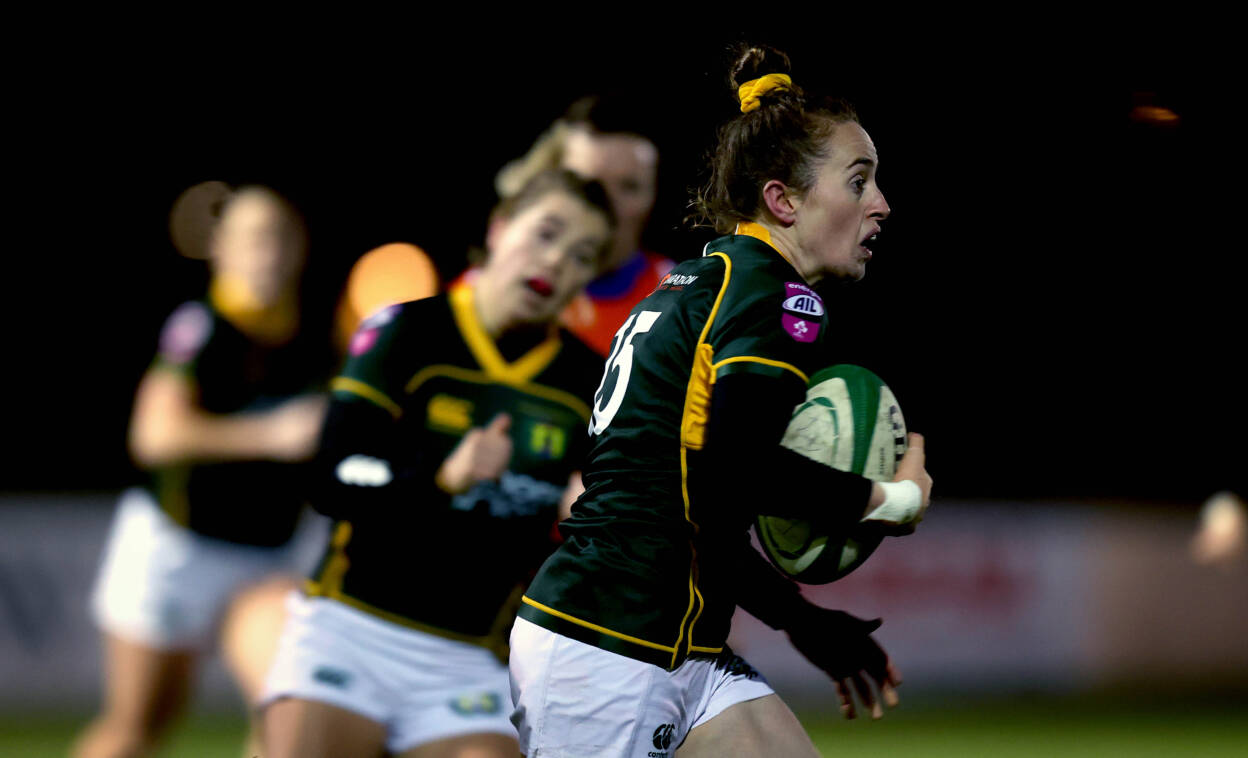 Caughey followed up with her sixth successful conversion, and Carroll then countered brilliantly from a kick, another try looking likely but replacement Sonia McDermott’s pass to openside McCarthy was ruled forward.

Stand-in captain Mairead Coyne continued to rally the Blue Belles, but a Peat steal, combined with an incisive carry by McQuade, paved the way for flanker Keelin Brady to add to Railway’s tally.

Canty was the pick of the Galwegians forwards, carrying the fight at the breakdown right to the end, with Elizabeth McNicholas and Fiona Scally also putting in big shifts.

Coyne denied Byrne a late breakaway effort, but the Railway skipper got the ball away for replacement Erin Coll to run in their twelfth and final try of the night.