There were three sizeable wins and one narrow verdict in the latest round of action in Energia Men’s All-Ireland League Division 2C.

Unbeaten leaders Skerries are part of the seven-up club – along with Highfield and Greystones in the higher divisions – after extending their winning streak with a 33-5 dismissal of Sunday’s Well.

Flanker Andrew Mintern scored the ‘Well’s only try and Skerries ran in five of their own, two from winger Mark Oliver and one each for Shane Murphy, Chris Tonge and Ronan Mulcahy.

After a long injury stoppage for openside Conn Marrey early on, Skerries took a while to get going. The breakthrough came when scrum half Murphy’s quick tap put Oliver over in the corner. 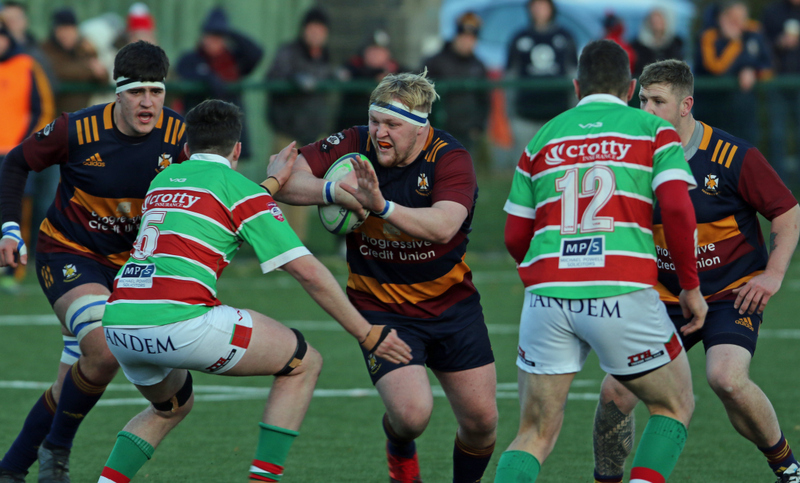 The Corkmen cut the gap to 14-5 for half-time, mauling their way over after kicking a penalty to touch. However, just five minutes into the second half, Skerries were over again.

Try scorer Oliver was the beneficiary of some terrific hands from Ronan Mulcahy and captain Kevin McGrath, and a cracking offload from Johnny Sherwin played in fellow replacement Tonge for the bonus point score.

Pacy full-back Mulcahy wrapped up the result with a superb run through the middle. Out-half O’Loghlen knocked over his fourth conversion, the final scoreline not a true reflection of how well the visitors played. 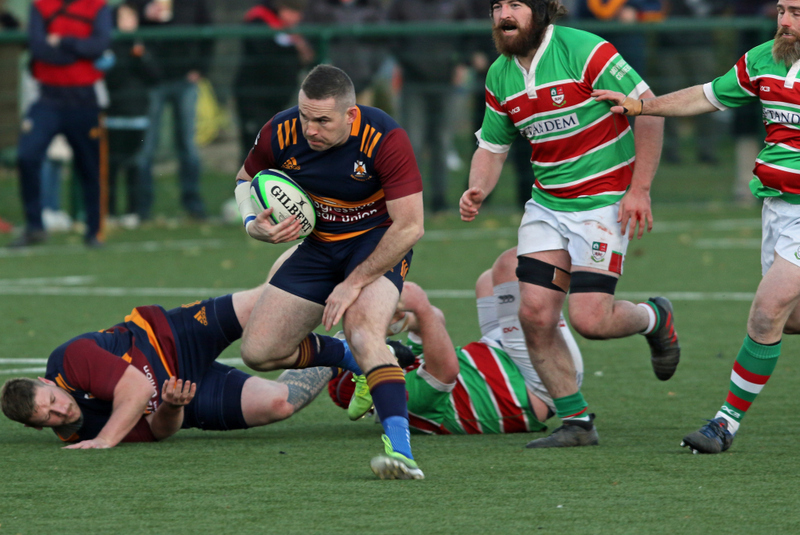 Sunday’s Well had strong performances from captain Conor O’Brien, who more often than not got over the gain line, and half-backs Eoin Geary and Fabian Loughrey, a Munster Under-18 Clubs representative two years ago.

Mid-table Midleton picked up their first try-scoring bonus point of the season in downing City of Derry 31-10. They bounced back from last week’s loss to Skerries with a five-try display.

Rory Horgan, Ger McIntyre, Will Casey, captain Bryan Moore and Ryan Lehane all crossed the whitewash for the Red Devils, who had three successful conversion from Stuart Lee.

Midleton now sit just three points outside of the top four, while Derry, who had a Ross McLaughlin try off a dominant scrum, have fallen one place to eighth in the table.

Centre Jack O’Grady crossed for an opening sixth-minute try for Bruff, following good work from the forwards off a lineout. Adam O’Dwyer converted and added a penalty for a 10-0 lead.

Nonetheless, the Tulliers, who were aiming for a third victory on the trot, hit back strongly with two unconverted tries from Liam Farrell and Brian Geraghty.

Dunne coolly drew in the defence before whipping the ball out for winger Farrell to glide in at the corner. Out-half Craig Strong then tidied up scrappy ball, evading two defenders and offloading out of a tackle for winger Geraghty to finish.

O’Dwyer restored Bruff’s lead with a penalty, making it 13-10 at the interval, and although Tullamore had the lion’s share of possession during a wind-backed second half, they left a number of chances behind them.

With the tension increasing around Kilballyowen Park, it was the visitors who ultimately held their nerve. Their scrum was a big weapon and Dunne hammered over a 77th-minute penalty from the 10-metre line.

He delivered again with a high-stakes kick soon after, rewarding Ciaran Ennis’ winning of the restart. Dunne’s crucial six-point contribution, coupled with a determined late defensive stand, moves Tullamore up to third. 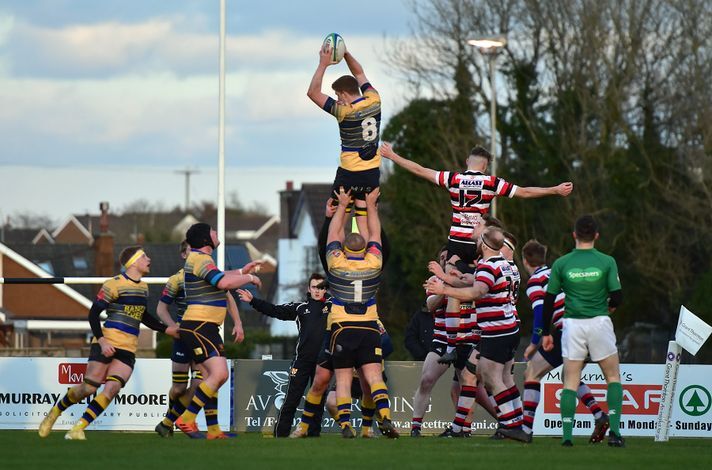 They have swapped places with Bangor who fell to a 36-12 defeat to Enniscorthy at Upritchard Park. The Wexford outfit impressed despite missing out-half Ivan Poole, who was snowbound in the UK.

‘Scorthy’s tall centre Nick Doyle stood out again, having a key involvement – including two terrific breaks – in the lead up to tries for David O’Dwyer, returning full-back Richard Dunne and Arthur Dunne.

Bangor welcomed back Phil Whyte and David Bradford to their pack and played into the wind during the first half. By the end of it, they had a 19-5 deficit to make up.

Doyle provided the assist for winger O’Dwyer to go over in the third minute, but Bangor’s scrummaging strength earned them an encouraging response, number 8 Mike Weir picking up from the base and driving over in the 16th minute.

However, Bangor soon lost Jamie Clegg and David Bradford to head knocks, and a clever ‘Scorthy lineout paved the way for lock David Farrell to touch down on the half hour mark.

Doyle then showed a clean pair of heels to the home defence, breaking through from inside his own half and using a dummy and a sidestep to release supporting full-back Richard Dunne for a 20-metre run-in.

Bangor continued to have issues with their tackling on the resumption, as the visitors ran in two more tries to chalk up the bonus point. Dunne completed his brace in the corner.

Then Doyle was tackled just before the line but got his offload away for scrum half Dunne to get on the scoresheet. Conor Lusty burst over for a late Bangor try, set up Shay Storey’s initial break from deep. 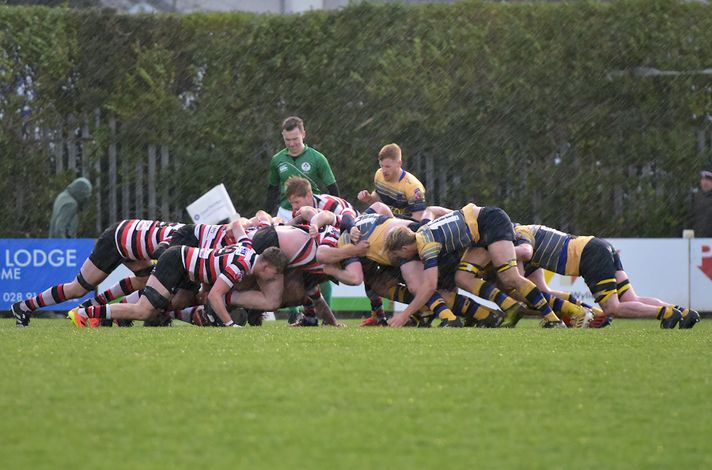 The fleet-footed O’Dwyer doubled his contribution with with the final try of the game, out-half Ben Kidd tagging on this third successful conversion as Ben Manion’s charges won on the road for the third time this term.

‘Scorthy head coach Manion told the Enniscorthy Guardian: “I am very pleased with the way the boys played in very difficult conditions. Losing Ivan before the game was a blow.

“But the squad responded as I would have expected. Our ball retention was excellent, both with and against the wind.”