Harry Sheridan, one of Dublin University's best performers on the day, tries to break away from Young Munster prop David Begley ©INPHO/Tom Maher

Trinity were leading 7-3 at that stage, prop Giuseppe Coyne showing his dynamism again with a high-quality 33rd-minute try that came from an initial Louis O’Reilly kick.

That score cancelled out a 40-metre penalty from out-half Evan Cusack, who was looking to get Young Munster back on track after losing at home to Clontarf.

Nonetheless, the sending-off had a huge impact and Ulster Academy forward Harry Sheridan crashed over in the 49th minute to kick off a run of 31 unanswered second half points. 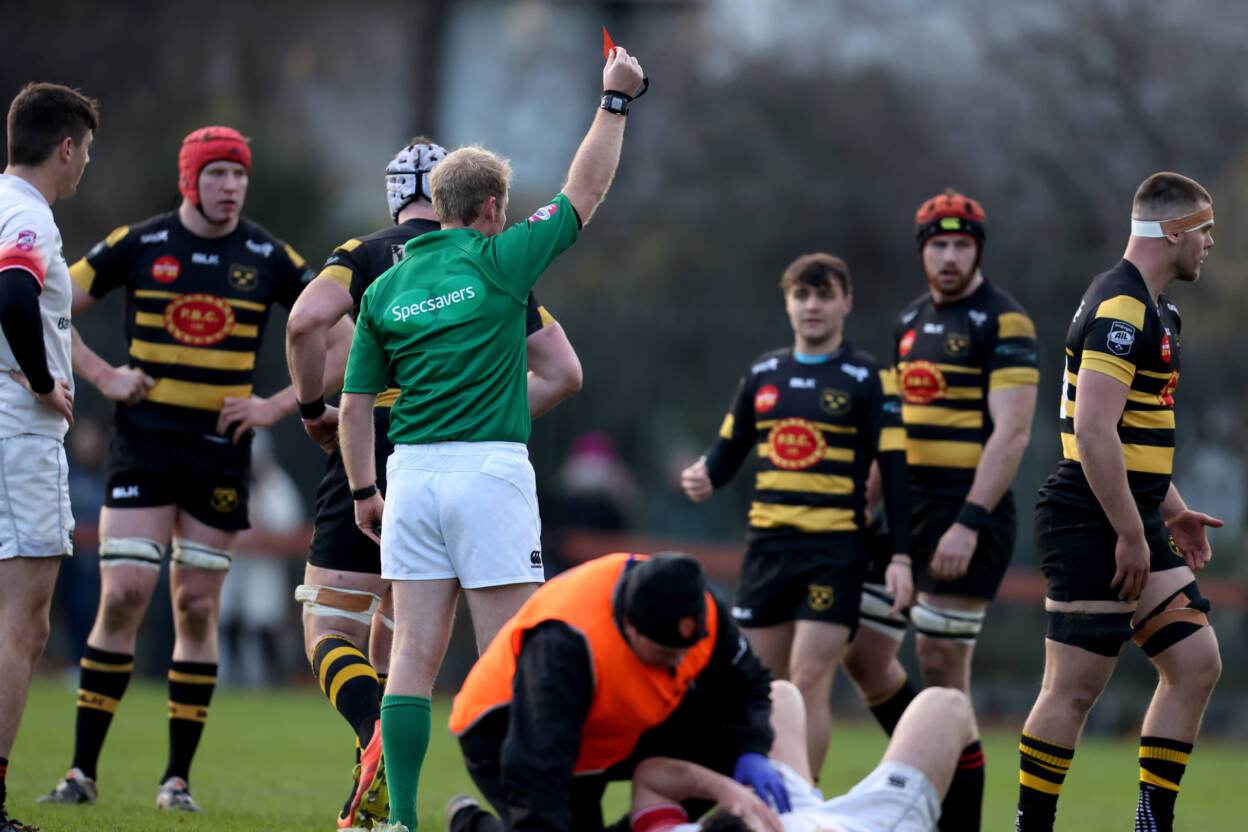 Trinity got off to the better start, gaining ground through penalties and threatening out wide. However, an overthrown lineout was gobbled up by Munsters hooker Mark O’Mara at the rear.

With captain Alan Kennedy and Harry Fleming going the direct route with their carries, the Cookies earned a long-range penalty which Cusack confidently dispatched through the posts.

However, Young Munster were unable to build on their 10th-minute lead with Cusack missing touch from a subsequent penalty and winger Luke Fitzgerald then kicking the ball dead. 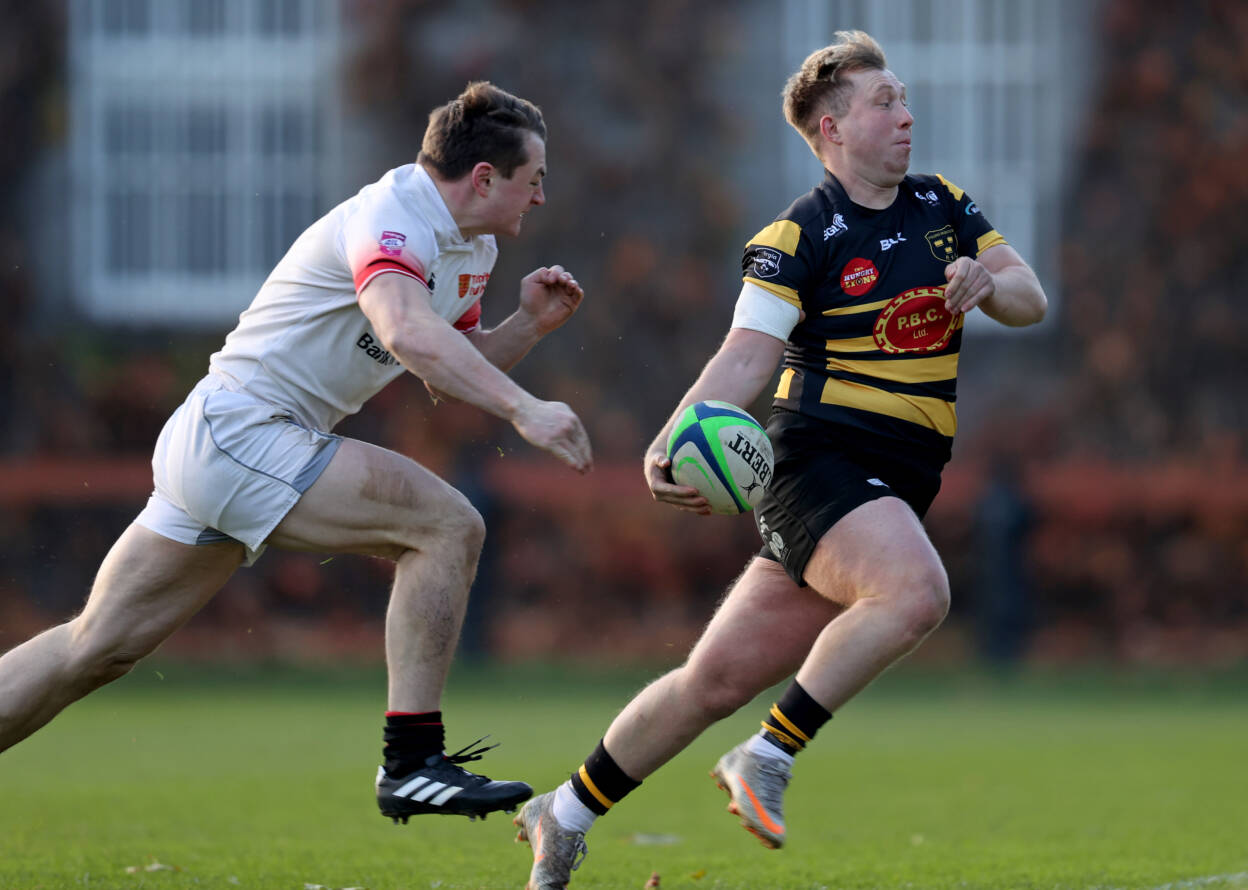 A nicely-worked move from a lineout had Trinity centre Jones charging into the visitors’ 22, Sheridan and Coyne drawing them closer to the whitewash until the ball went loose and O’Mara pounced on it.

The students were a pass away from scoring when Aran Egan sent full-back Matthew Jungmann racing up into the 22, while Munsters responded with a threatening kick chase from Conor Hayes.

Craig O’Hanlon was squeezed out near the left corner as the visitors pressed again, and it on his wing that the students took advantage of a favourable bounce to score the game’s opening try.

O’Reilly lobbed through from a ruck, the ball bounced away from O’Hanlon and into the arms of the onrushing Mark Nicholson who flicked a fantastic offload out to O’Reilly who, with two defenders closing in, threw the ball back inside for Coyne to go over unopposed from 15 metres out. 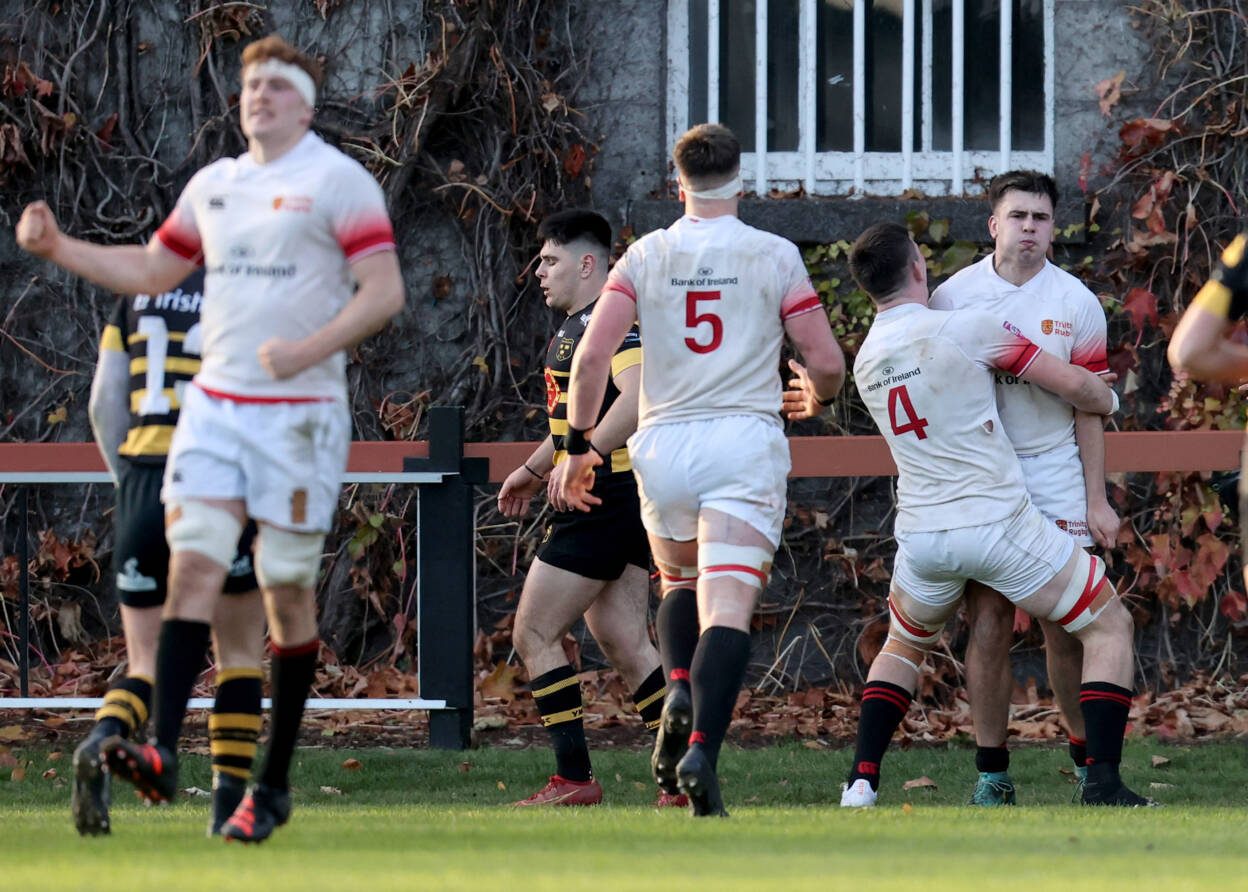 Out-half Egan converted to make it 7-3 and that is how it stayed up to the break, Moloney’s dismissal leaving a sour taste in the mouth for the Cookies who felt it did not warrant such a sanction.

Trinity quickly made their numerical advantage count on the restart, Kennedy knocking on and Joe McCarthy, the Leinster Academy lock, swatting away four tacklers on a barnstorming run.

Openside Alan Francis was next to blaze through Munsters’ defence, Jones bringing them back into the 22 before they moved quickly from ruck to ruck and Sheridan arrowed in between two defenders to cross to the left of the posts. 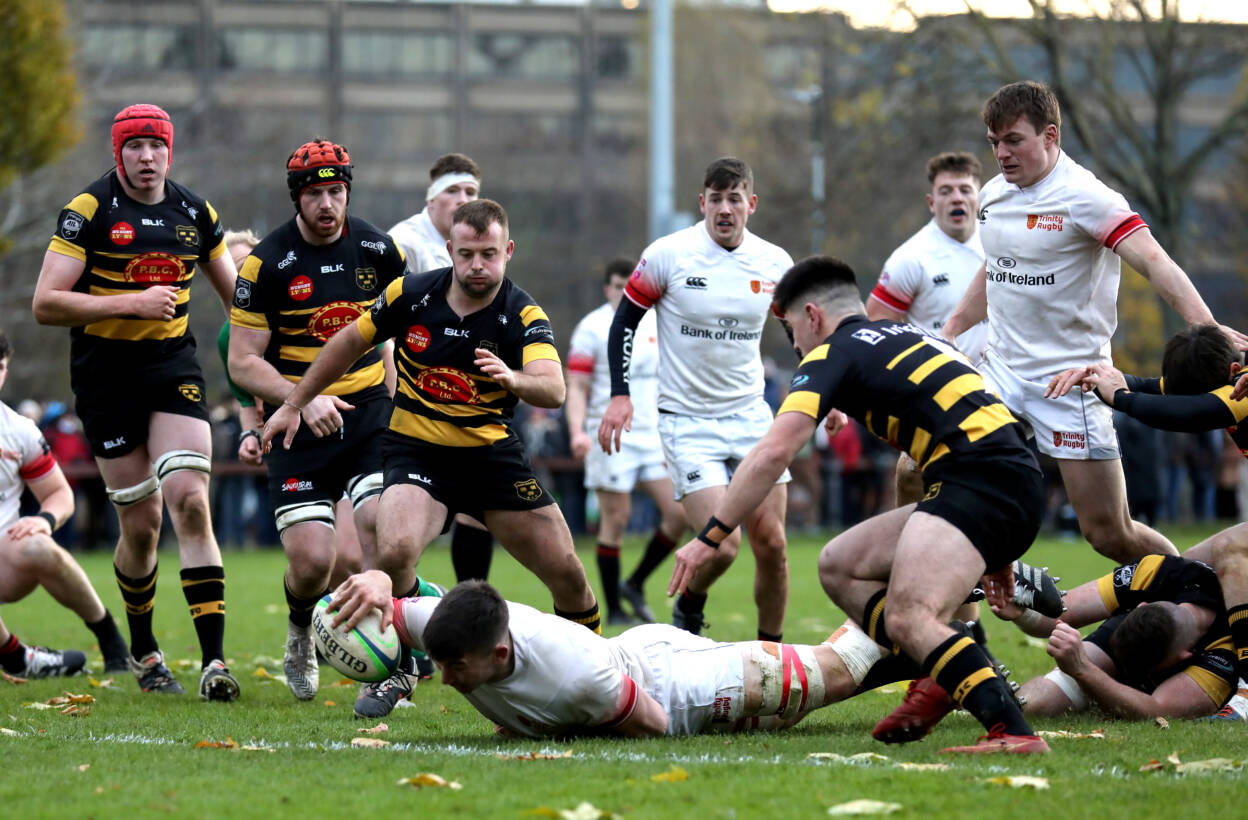 Egan converted and after the Limerick men suffered a further blow with centre Jack Harrington hobbling off, they were unable to convert a promising maul into points.

Instead, McCarthy got in to steal the ball at the breakdown, launching a lightning-quick counter attack that had Ronan Quinn breaking up the right touchline from a Marcus Kiely kick.

Quinn could not connect with his support on this occasion, but a McCarthy lineout steal allowed Trinity to go through the phases again – Thomas Connolly and Sheridan both carried well – and number 8 Diarmuid McCormack dived over to score from a ruck.

19-3 became 24-3 with a quarter of an hour remaining, crisp hands across the back-line putting Egan, last week’s goal-kicking hero at Lansdowne, over in the left corner for the bonus point score.

The extra man continued to hurt Munsters, as two more converted efforts from Kiely and lively replacement Ronan Murphy, who crossed from a dominant scrum, turned it into a six-try drubbing.

Kiely crossed wide on the right after back rower Murphy had taken the ball into contact and got his hands free to give the tall centre a simple finish. Egan converted with aplomb.

Munsters winger O’Hanlon went close to an interception, but Trinity were still full of running and signed off with another seven-pointer. From a close-in scrum, a big shove had Murphy finishing from the rear. 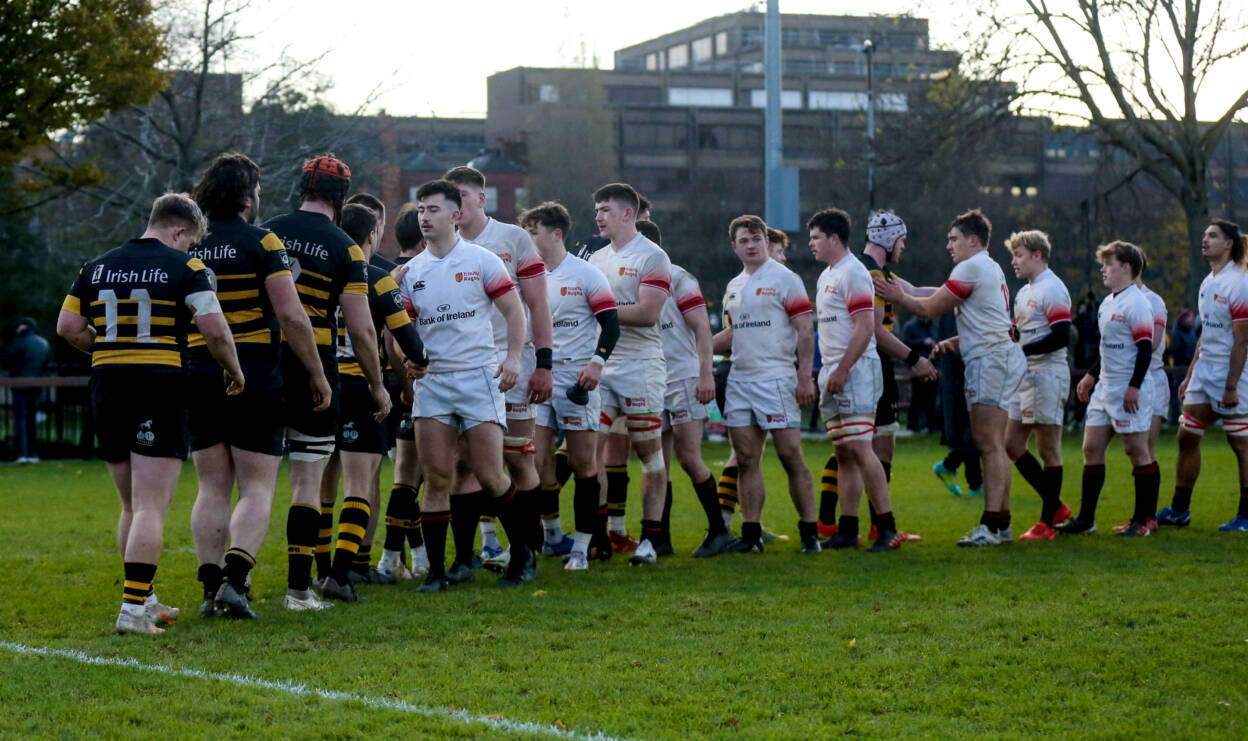