Terenure College drew closer to the top four with a well-judged 20-12 success at UCD. Number 8 Jordan Coghlan touched down twice as ‘Nure registered their third win in a row.

This Friday Night Lights clash at Belfield was played at an electric pace, Chris Cosgrave and Ronan Foley claiming tries during the first half an hour for an eager UCD side.

Full-back Adam La Grue finished superbly in very little room to move Terenure ahead for the first time, with defences remaining on top for the most part.

Handling errors prevented UCD from responding, leaving Jake Swaine’s 76th-minute penalty to give ‘Nure a crucial cushion and they held on to lift the Eddie Thornton Memorial Trophy. 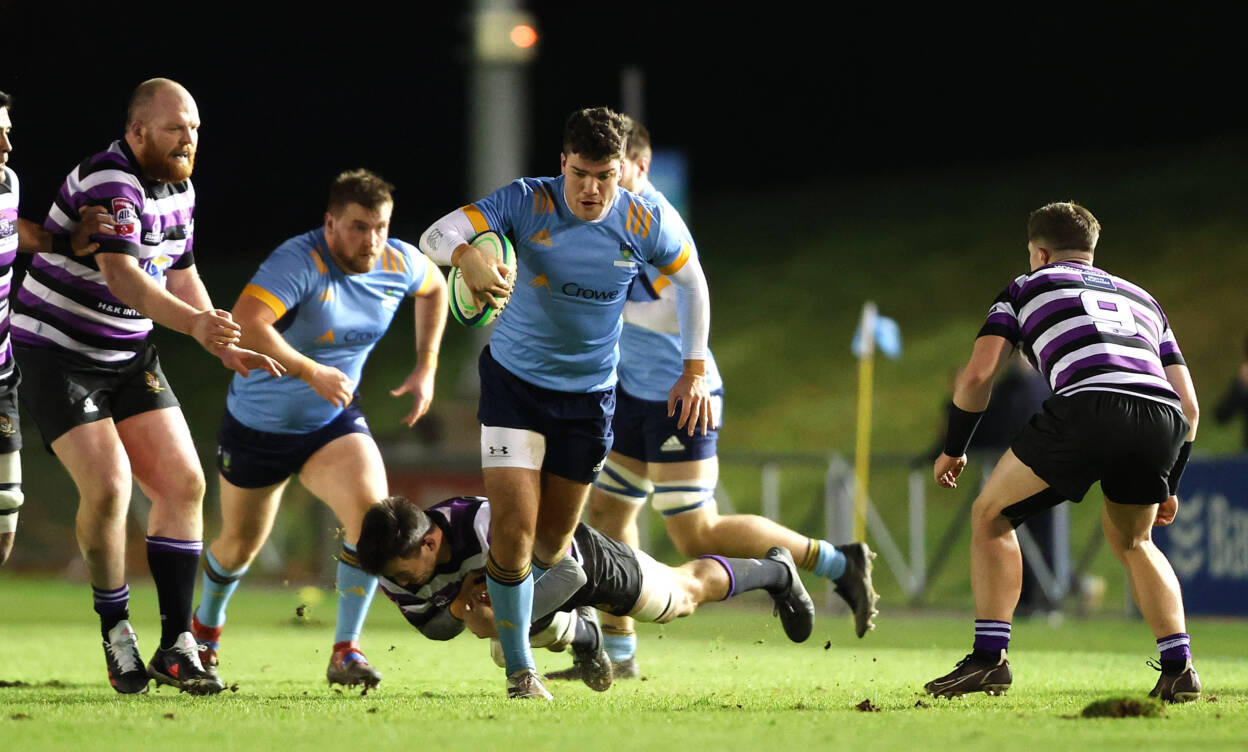 Terenure appeared to settle the quickest, winning a scrum penalty and getting their big forwards on the ball. Captain Harrison Brewer took them up towards the UCD 22.

With a tricky wind at their backs, ‘Nure scrum half Alan Bennie kicked out on the full and La Grue did likewise just a couple of minutes later.

UCD struck gold from their first serious opportunity, Foley setting up a lineout maul on the right before quick passing out to the left released Cosgrave to nip in between Swaine and La Grue and crash over.

The full-back could not convert his 10th-minute try, and Terenure were back level inside five minutes. A knock-on denied them initially but a strong counter-ruck, led by Brewer, saw them rewarded in the right corner.

Coghlan was able to pick up and drive over for his opening try, with crucial support from Conall Boomer. The conversion was missed by centre Dooley, leaving the teams level at five points each. 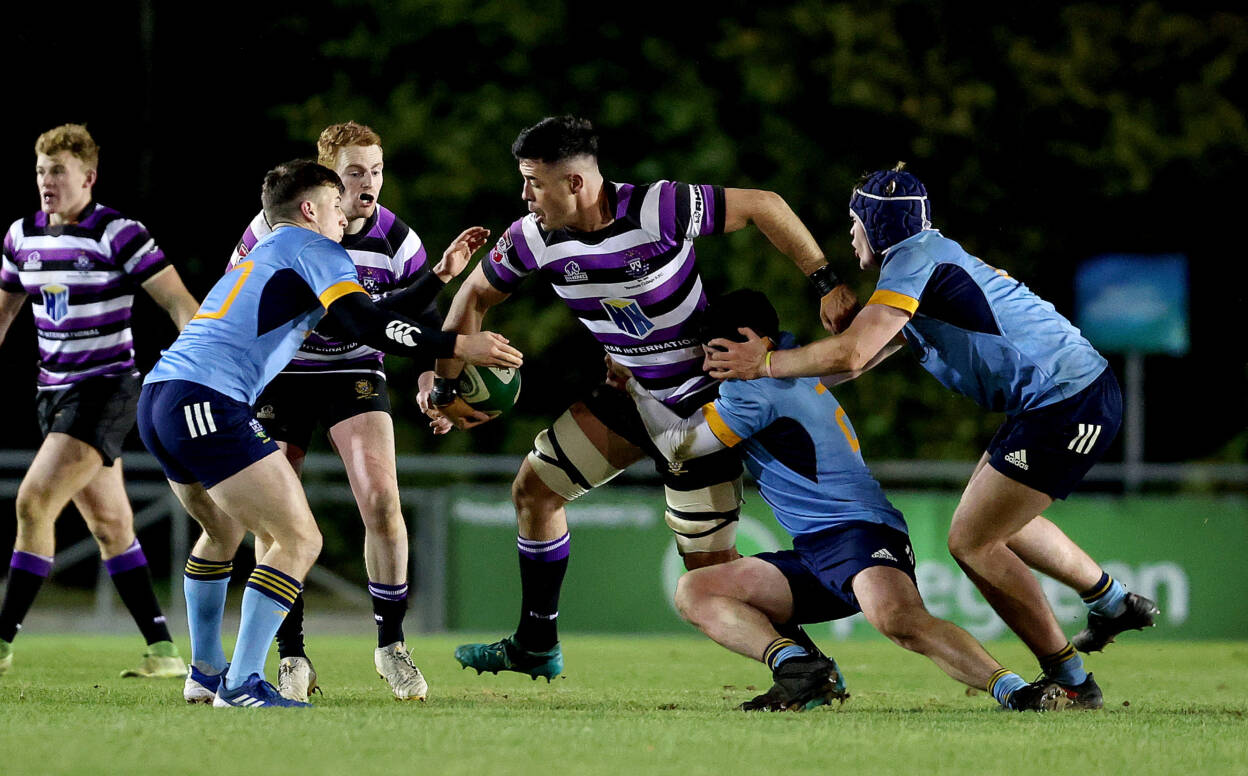 The visitors then threatened from kicks and a maul near the right corner, the match officials adjudging that prop Andy Keating had been held up by UCD’s scramble defence.

Foley’s breakdown smarts helped him to win a relieving penalty for the students, who marched further forward after Terenure lock Matthew Caffrey was caught not rolling away.

UCD again went to the corner from the penalty, building pressure through their forwards until Leinster Academy flanker Sean O’Brien was just held up from a close-range surge.

However, after Dooley overcooked a goal-line drop out, the resulting five-metre scrum saw Foley steal a march on the defending Boomer. He thundered over beside the posts, ahead of the flanker and Cathal Marsh. 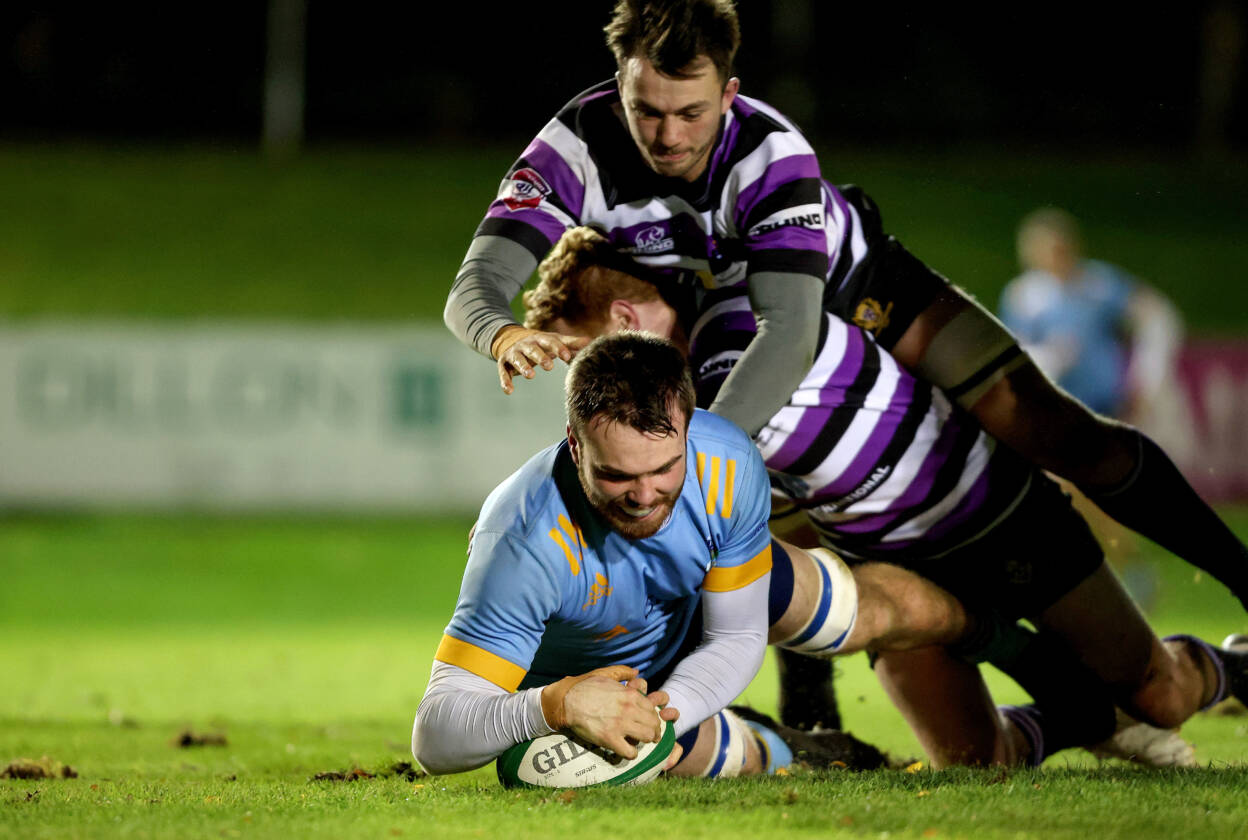 Cosgrave’s conversion made it 12-5 to Kevin Croke’s charges, but within two minutes later, ‘Nure were back level having got back into maul territory thanks to a penalty at the breakdown won by centre Colm de Buitléar.

The subsequent lineout drive got a second surge, seeing Coghlan plunge over in the same right corner. Dooley levelled with a cracking conversion and that is how it stayed up to the break.

‘Nure continued to slightly edge the breakdown battle, with openside Boomer winning a penalty in front of his own posts. The visitors also got a late scrum decision, Dooley trying his luck with the kick from halfway but it fell wide.

The increasingly-influential de Buitléar shrugged off two defenders to gain good yardage, early in the second period, as UCD were forced back on the defensive.

O’Brien stole an important lineout in his own 22 as ‘Nure looked set to build for a score, the visitors storming back with a great run from La Grue – only for Brewer’s subsequent offload to be intercepted by Alex O’Grady. 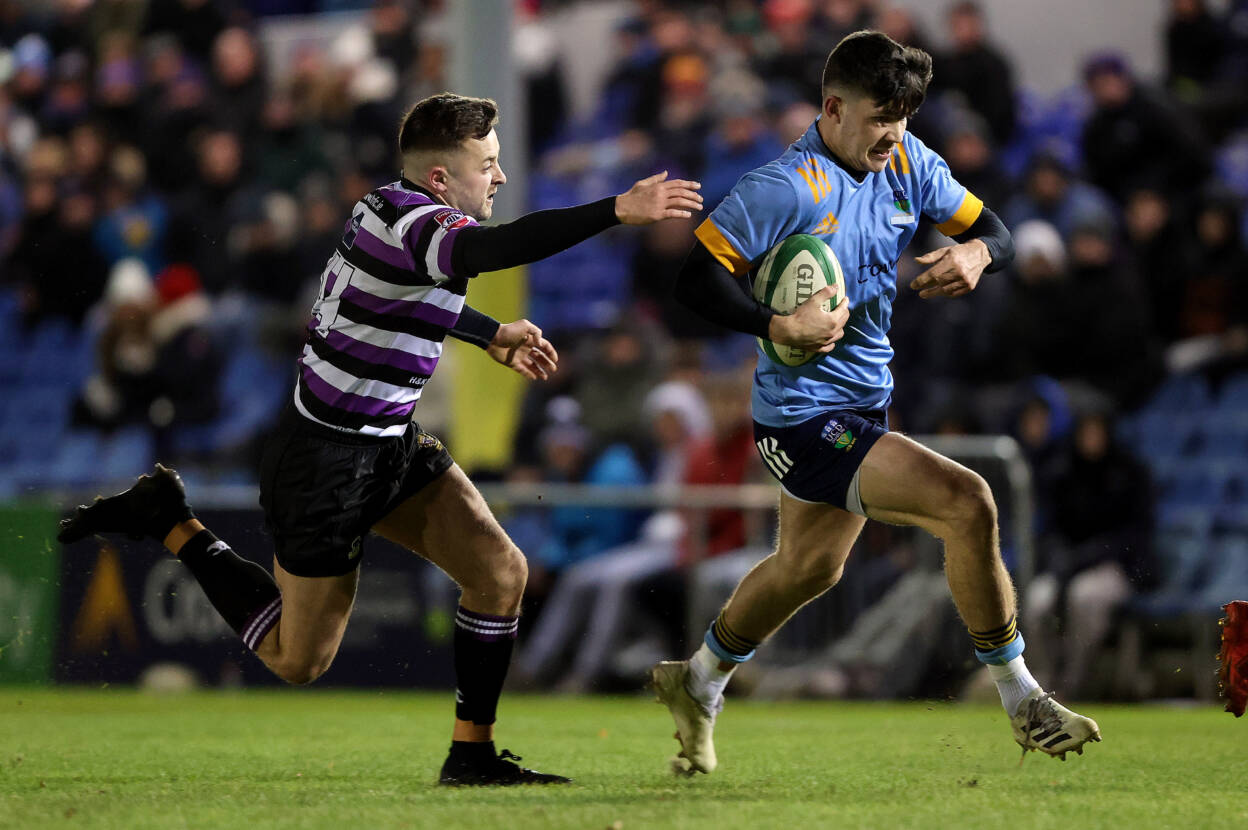 The near misses continued with Terenure’s maul earning a penalty before Michael Melia fumbled at a second lineout opportunity. Yet, they were clinical with their next chance.

Coghlan and de Buitléar both made ground in the UCD 22, the latter getting every inch out out of a carry up towards the posts. Bennie passed long from the ruck, setting up La Grue to jink past two defenders and reach over the line.

Swaine curled the conversion wide from the right, and as the students sought to quickly close the gap, Gerard Hill and Ben Brownlee carried well before Brewer picked up a turnover penalty.

The fight at the breakdown intensified heading into the final 15 minutes, with the tireless Foley replying with a well-won penalty of his own. 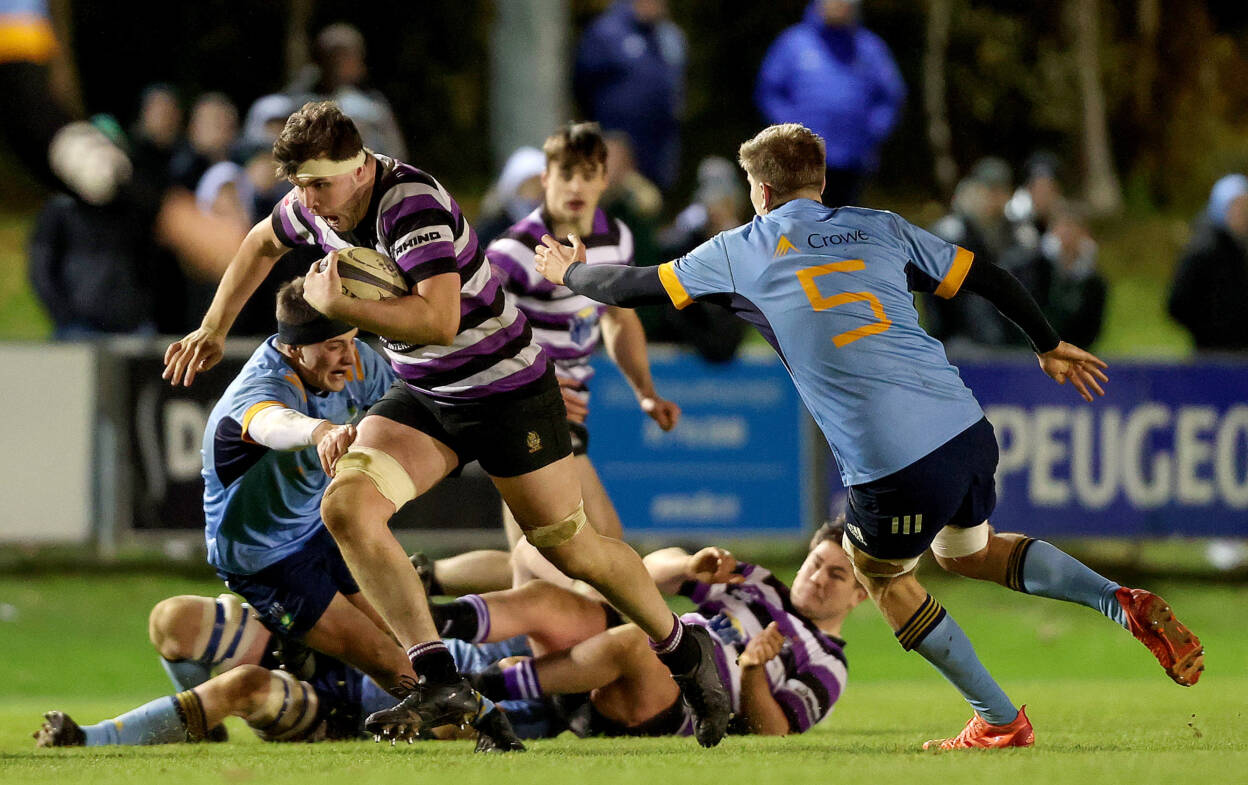 The resulting maul was UCD’s best of the night but replacement James Tarrant knocked on when the ball was moved out the back-line.

They were frustrated again when Rory McGuire was penalised for not releasing, less than five metres out from the Terenure line.

Indeed, Sean Skehan’s men worked their way back to halfway via a maul and a Bennie snipe, before lively replacement Peter Sylvester was caught with a high tackle.

The game remained right in the melting pot as UCD brilliantly kept the ball infield, clearing back to Terenure’s half. They also won turnover ball from a maul, with big prop McGuire to the fore.

Nonetheless, Sylvester and La Grue proved elusive as they brought ‘Nure back downfield, and a powerful scrum earned the decisive penalty for winger Swaine, with four minutes remaining. 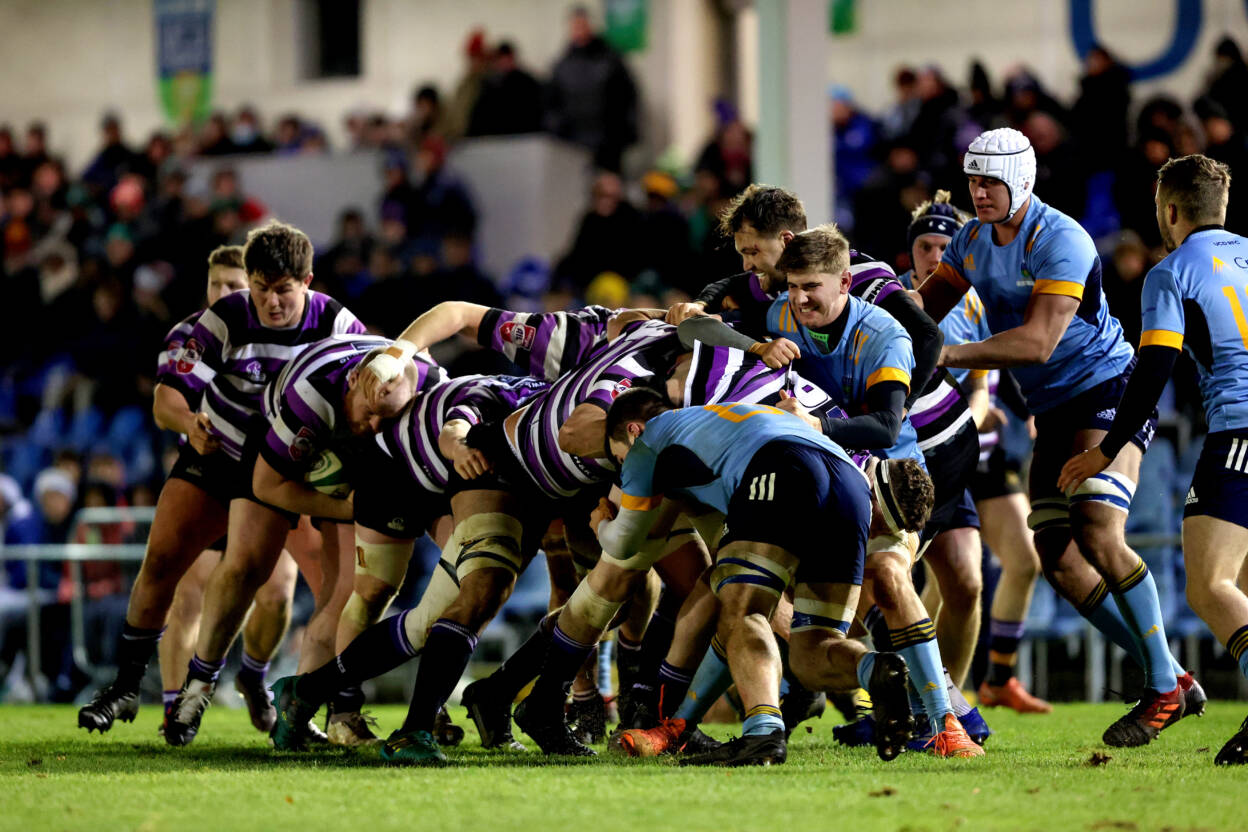