Skerries and Bangor put their unbeaten runs on the line this weekend when they visit two other teams in the top half of Division 2C – Midleton and Tullamore respectively.

With the experienced Simon Logue and Stephen Corr back available, the latter starting at number 8, City of Derry are hoping to banish memories of their recent 38-15 defeat away to Bruff.

“We’ve got to be clinical, we’ve got to be up for it,” Derry boss Richard McCarter told the Derry Journal. “We have to really attack from the first minutes and not wait 25 minutes to realise the opposition are beatable.”

A first win would see Clonmel climb above Derry in the table. There are five personnel changes as Roland Marki and Billy Coffey return up front, while Alex Sheehan, Greg Carroll and Gavin Whelan gain starts behind the scrum.

A dose of home comforts for Enniscorthy after losing their top of the table clash with Skerries. Their Australian head coach Ben Manion is remaining positive as they face into some key games before the Christmas break.

“It was there for the taking against Skerries, we just need to be a bit smarter,” he said. “It’s nice to get back home. It’s a league that’s kind of separating, top and bottom. We’ve got to do well against Sunday’s Well.” 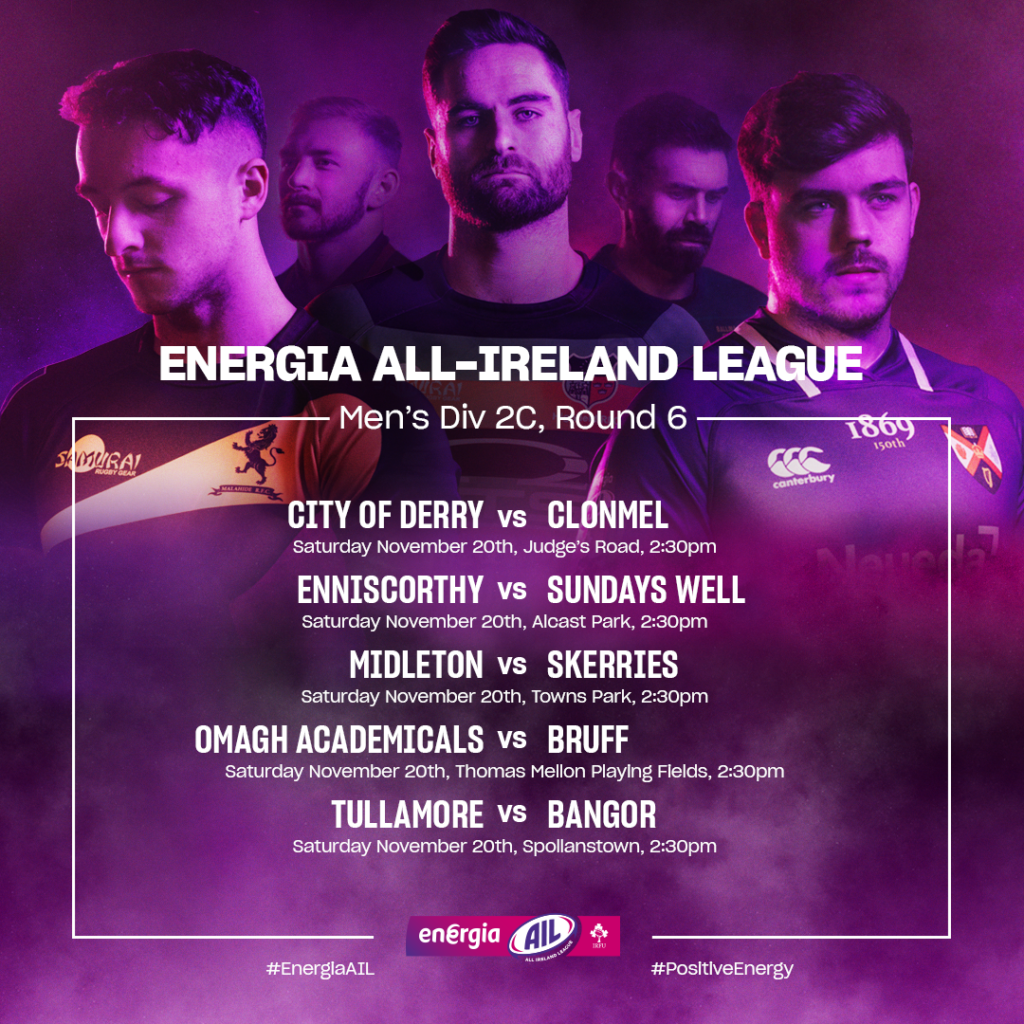 With three solid victories in the last four rounds, Midleton’s tails are certainly up and the Bryan Moore-led Red Devils are relishing a crack at unbeaten leaders Skerries.

Midleton, who lost 27-3 away to the Goats two years ago, promote lock Rob Hickey and winger Rian Hogan from the bench. Charlie Murphy moves to openside flanker and Richie Daly joins Shayne Anderson in midfield.

Billy Mulcahy replaces Colin Doyle at inside centre in Skerries’ only change. Out-half Paul O’Loghlen, who has 45 points to his name, impressed against Enniscorthy, sending a grubber kick through for the opening try and landing a closing penalty.

There are some notable changes to the Omagh line-up for the visit of Bruff. Matthew Clyde packs down at the base of the scrum, with Ulster underage representative David Braden chosen at loosehead prop.

There are starts too for Stephen Maclaine at full-back and Scott Ballantine in midfield, as the Glenn Kyle-coached Accies aim to put a frustrating 13-11 reversal in Bangor behind them.

Fresh from their maiden victory over Derry a fortnight ago, Bruff will be targeting a strong start again. Captain John Clery scored two tries and winger Mark Fitzgerald grabbed his third in two games.

Jack Delahunt and Leon Fox have been added to the Tullamore back row for their crunch encounter with second-placed Bangor. Cathal Feighery and Conor Kelly slot back in at hooker and lock respectively.

Liam Farrell’s inclusion on the right wing is the only back-line change to the Tulliers team that won 13-6 at Sunday’s Well. They have fond memories of edging out Bangor 5-0 in their final game before Covid-19 struck.

Winning at Spollanstown would keep up the momentum for Bangor who host former leaders Enniscorthy next week. Tom Rock’s men have the second best defensive record so far, conceding 13.4 points per game.