Tipperary’s Maeve Óg O’Leary said it was an ‘amazing’ experience to make her international debut for the Ireland Women against the USA at the RDS.

Coming on to replace captain Ciara Griffin inside the final quarter, O’Leary played her part in ensuring that Ireland ran out 20-10 winners over the Eagles in their opening autumn Test.

“It was amazing. Obviously this summer I got to play interpros with Munster, coming from my club in Blackrock. That was a big step up, so coming out here I was kind of prepared,” said O’Leary, speaking following her Ireland debut.

“That first international cap is obviously a big step up in tempo, but I loved it. I was able. The build-up, it was really exciting.

“All the girls have been all extremely welcoming. It’s a really, really special bunch. My girls from Blackrock, Hannah O’Connor, Laura Feely, and then I was rooming with Beibhinn.

“She’s obviously such a legend of the game, so she was giving me all the tips. Then just my family there as my support system, just to talk to, to come away from that rugby side of things. Every single one of those girls was backing me up.”

Speaking of which, by making her Ireland bow in Friday’s game, O’Leary became the second member of her family to play international rugby.

A former Connacht player, who featured in their groundbreaking PRO12 final win over Leinster in 2016, her older brother Shane qualifies for Canada through their New Brunswick-born mother.

Having previously represented them at Under-20 level in 2013, he subsequently advanced to the Canadians’ senior set-up four years later and has accumulated 13 caps to date.

He is currently plying his trade in France with Rouen, but was no going to pass up on an opportunity to see his younger sister in action for Ireland.

Shane’s great. He’s so, so excited for me. He actually literally flew in this morning (Friday) from France to watch my game. That was kind of a surprise.

“That was obviously really special, but he has been such a help for me the whole way. I’ll send him my games, he’ll give me feedback, but he’s so positive.

“He always tells me just to enjoy myself, that I’m here for a reason. He’s been a very positive influence in my rugby career so far.”

Whereas in previous autumn internationals O’Leary might have been expecting to make her Ireland debut at Energia Park in Donnybrook, she instead got her first chance in the maiden women’s international to take place at the RDS. 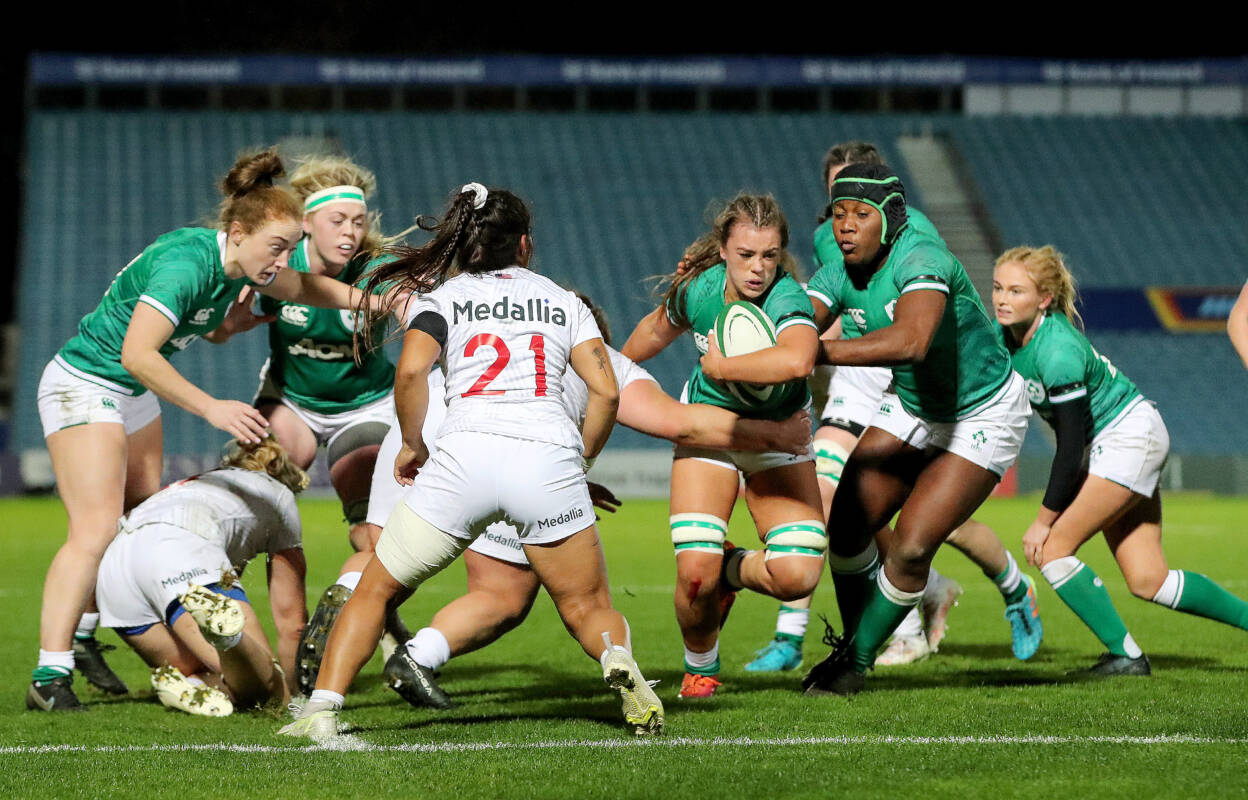 However, interestingly, she had already represented her country in Donnybrook in a different sporting discipline.

“I played softball for Ireland for about three years. I started when I was 16 in Florida, in the Under-19 World Championships and then we came second in Europe with them in the U-19 European Championships.

“Then I went to California for another U-19 Worlds. Then I actually got my first senior cap against the USA in Donnybrook. The USA softball team came to play us here.”

A gifted underage camogie player with her native Tipperary, O’Leary’s rugby journey began in her local club of Ballina/Killaloe. This is a club that is synonymous with the famed Foley family, with Rosie – a former international herself – recently succeeding her father Brendan as club President.

Given she was the only one of six uncapped players in the 33-strong squad to make the matchday squad for the USA match, it is clear that O’Leary has already left a strong impression behind the scenes.

🗣️ It was a special night for Maeve Óg O’Leary on Friday, as she came off the bench to make her Ireland debut at @TheRDS 👇#NothingLikeIt | #IrishRugby pic.twitter.com/lzsqkJQASV

The 21-year-old flanker acknowledges she was not necessarily targeting game-time against the USA, but was thrilled to be given an opportunity on a big Friday Night Lights occasion.

“My eye wasn’t even really on that cap and that matchday squad. I just wanted to go in there and put my head down, and I just wanted to be a sponge. Soak up all the knowledge around me,” she added.

I knew coming in with just two camp weekends, it was going to be tough to make that matchday squad.

“Then obviously it was just such a bonus when I got named on that squad. To be able to come out and play for 20 minutes with Ireland, it was a dream come true.”