In Energia Men’s All-Ireland League Division 2A, Queen’s University and MU Barnhall put their 100% records on the line in the match of the round. All four of the other fixtures are dotted across Munster.

Following the recent cancellation of a local derby, Nenagh Ormond get their first dose of Friday Night Lights action when UL Bohemians come to town. The down week has helped some injuries to clear.

Bohs arrive on the back of their first win over the campaign, a dogged 18-14 defeat of Cashel, leaving their head coach, Tipperary man Tommy O’Donnell, chasing a quick-fire double over the county’s leading two clubs.

Openside Robert Buckley has been a standout performer for Nenagh in recent rounds. It could be a tasty individual duel with UL handing the number 7 jersey to Mateo Ibanez, son of former France captain Raphael.

There was no week off for Cashel who gave Garryowen a thorough test in the Munster Senior Cup semi-final. They threatened an upset, with Ben Murray and Robin Foot both touching down, before losing out 33-21.

Rainey have regrouped following a couple of thumping defeats, and they have good memories of their most recent trip to Spafield two years ago when their half-backs guided them to an 18-15 victory.

Rainey’s director of rugby Brian Smyth commented: “It’s always a hotly-contested game at Spafield and there’s never much between the sides. Hopefully we can entertain the very vocal home support and, ideally, come back up the road with a favourable result.” 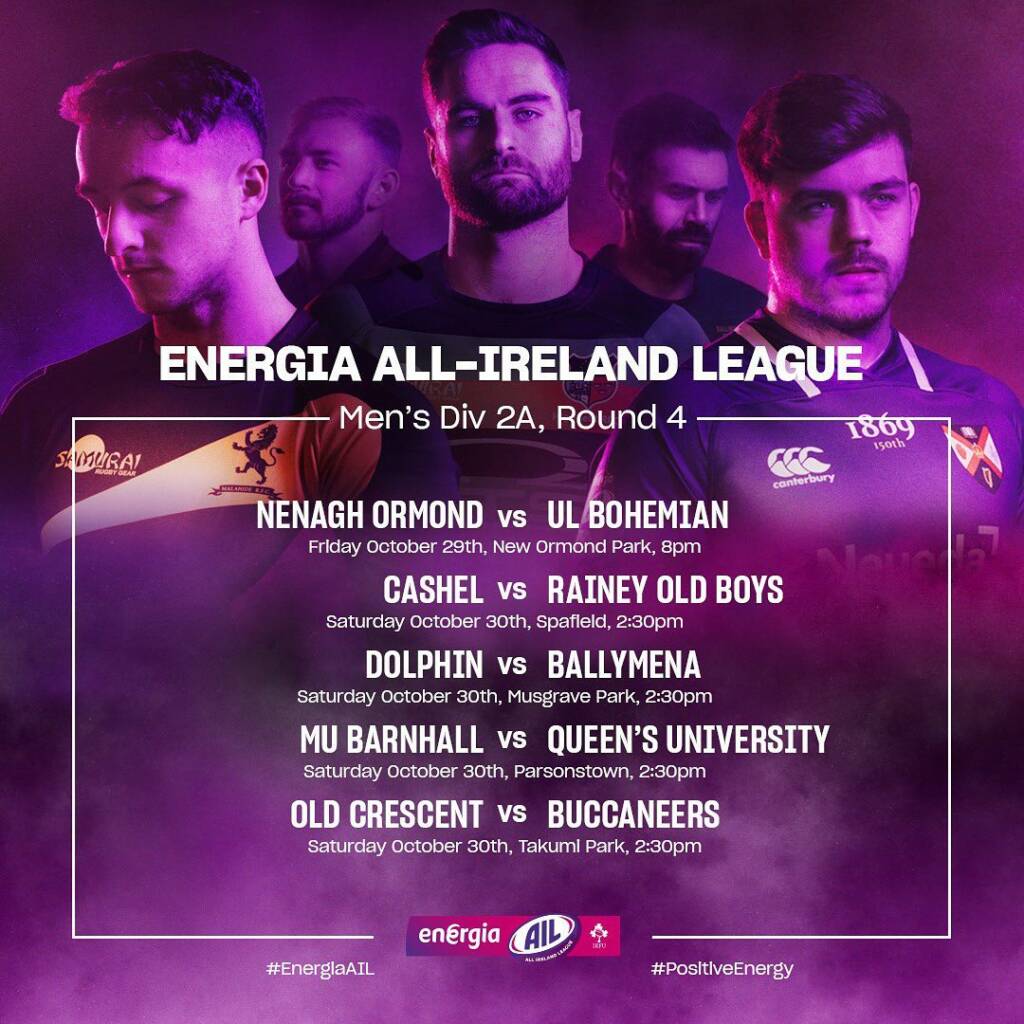 How Dolphin rebound from their 60-point hammering by Queen’s University will tell a lot. They dust themselves off to face more Ulster opposition in Ballymena, who sit just a point above Brian Scott’s men in the table.

The Braidmen have not hit top speed yet but they are getting there. They managed without Tim Small last time out against Old Crescent, Pierce Crowe scoring a try to add to his strong start to the season.

However, Ballymena have not won an away AIL fixture since beating Buccaneers in December 2018. That 12-match winless streak includes a 26-all draw with Dolphin in Cork two years ago.

Something has got to give at Parsonstown where MU Barnhall entertain front-running and free-scoring Queen’s. The Blue Bulls are protecting a proud home record of 16 league wins out of 17, stretching back to 2018.

The only team to beat them was Queen’s who triumphed 49-31 in February 2020. Captain David ‘Dizzy’ Whitten, Stuart Martin and Luke Pollock bagged a brace of tries each that day.

Barnhall will be live-streaming tomorrow’s rematch on their YouTube channel. Their promising young centre David Dooley, a try scorer against UL and Rainey, was called up to the Ireland Under-19 squad.

A first win since their home ground was renamed Takumi Park is the goal for Old Crescent. Losing bonus points at Rainey and Ballymena, combined with a 21-point tally against Queen’s, shows they are not far away from putting together some results.

With two tries each, Cathal Monaghan and Jack O’Mahony have caught the eye for Crescent. Buccaneers will be mindful that they lost twice to the Limerick men in 2019/20.

Nonetheless, the current Buccs side look well set-up to win on the road. Their new captain Evan Galvin said: “Two wins out of three so far. Momentum is key in the All-Ireland League, so it’s important to get into a habit of winning games.”