Energia Men’s All-Ireland League Division 1A has plenty of treats for Halloween weekend, including a crunch Lansdowne-Young Munster clash on the Aviva Stadium’s main pitch.

Preview: A record of three losses against three wins, Ballynahinch will find it difficult to break down unbeaten league leaders Garryowen unless the Light Blues’ exertions catch up with them.

While the rest of the top flight rested up last week, Mike Sherry’s men edged out Cashel in a dramatic Munster Senior Cup semi-final. “Ballynahinch have had a patchy enough start, but they’ll be licking their lips waiting to welcome us up there,” said Sherry.

Just two tries so far and an overreliance on goalkicker Greg Hutley (18 points) tells its own story for ‘Hinch. You get the feeling a big performance is coming, but it may happen in the following two rounds against the bottom two.

Preview: It has been a frustrating October for Cork Constitution, but you get the feeling the picture could be a lot rosier by this time next month. They are more than capable of reeling off wins over Dublin University, Garryowen, UCD and Ballynahinch.

Their road back towards the top four begins with the visit of Trinity, who have themselves recovered well from a poor start. “We’re playing some good stuff but not quite finishing (our chances),” said Trinity director of rugby Tony Smeeth. 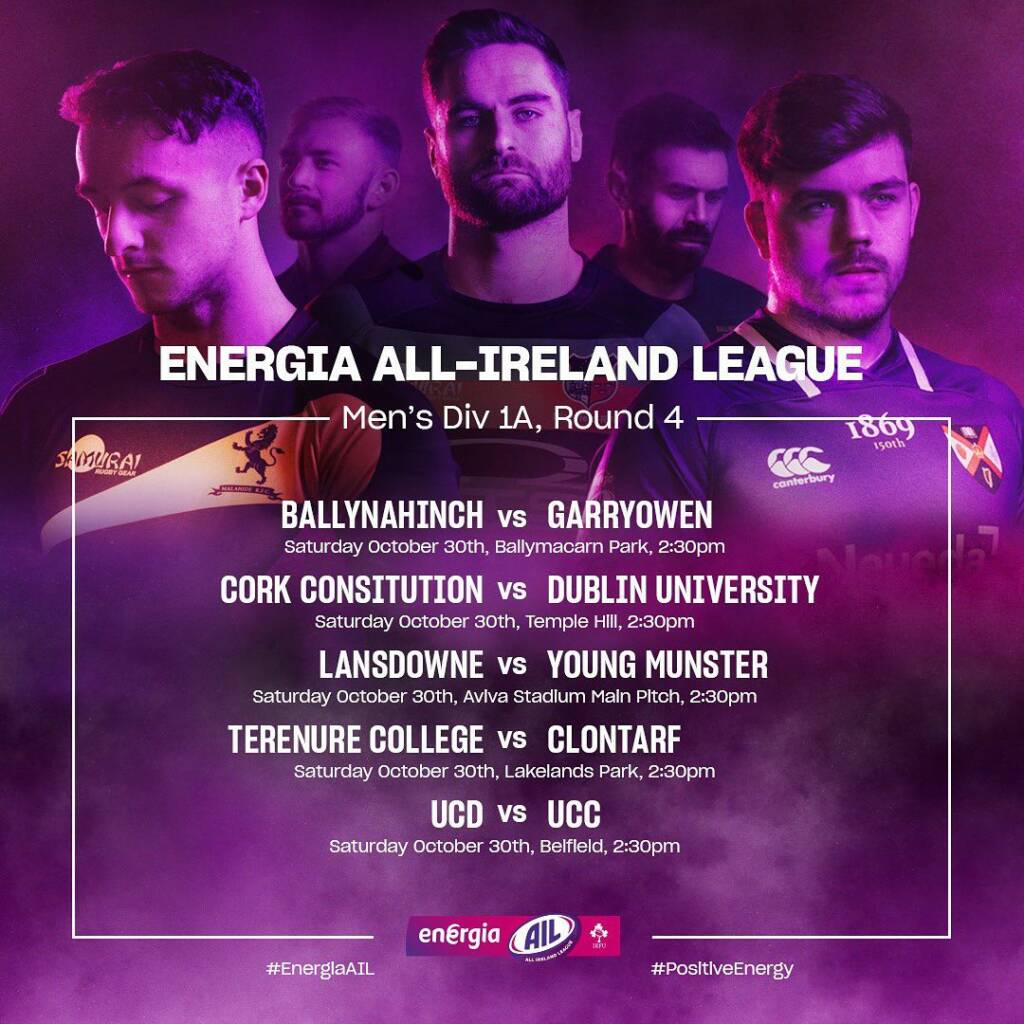 Preview: The top flight’s big game of the Halloween weekend, and those in attendance at Irish Rugby HQ are definitely in for a treat. Jack Harrington and Jack Lyons are promoted from the bench to start for Young Munster.

The strong-carrying Dan Walsh also comes in at number 8, with Munsters boss Gearoid Prendergast saying: “Lansdowne are very difficult opposition. While the home form is very important, we’re really focusing on building those away wins as well.”

Both teams will have some provincial heavyweights on the bench, Lansdowne have added Leinster’s Peter Dooley and Munster prop Keynan Knox travels with the Cookies. Michael Silvester, the scorers of two tries at UCC, moves to full-back for the hosts.

Preview: Clontarf feel they owe Terenure College one after losing twice to them at the Bull Ring in 2019. The sides have not meet in the league since then, but Andy Wood’s men look the stronger outfit on current form.

That is not to write off Terenure, they have lost to two of the front runners so far and opposition coaches have spoken highly of their maul, in particular. New centre Peter Sylvester has quickly picked up two tries.

There is sure to be a ‘warm’ welcome for ‘Nure’s new number 8 Jordan Coghlan, who played for ‘Tarf during his early days. The back row battle will see the likes of Tony Ryan and Harrison Brewer waging war.

Preview: UCD have strengthened their back-line for this intervarsity derby, bringing in Leinster Academy talent Chris Cosgrave at full-back and David Ryan in midfield. Captain Jack Ringrose reverts to the left wing.

Leinster Under-19 forward Diarmuid Mangan switches to a back row berth, with Mark Morrissey and Jonathan Fish combining at lock. Kevin Croke’s youngsters are chasing their first win, as are visitors UCC.

The Cork students travel with a strong selection, bolstered by the inclusion of Munster’s John Hodnett and Jack O’Sullivan in the back row. They also have Scott Buckley at hooker and the fit-again Cian Whooley returning at out-half.